Chris West Plumbing uses simulation training to accelerate learning and get techs up to speed quickly.

A couple years ago, Chris West walked through a trade show and stopped by a booth to try out a product that was new to him. After placing a special headset over his eyes, he looked out into a virtual service call to fix an electric water heater.

Inside this “reality,” West could see a water heater in a basement just like any other in the real world right down to water on the floor and a utility sink. He could use his “hands” and, if he needed to crouch down to take a closer look at the unit, well, then, the world he was in matched that view. He could remove covers to check the electrical supply, change out heating elements and, if he needed, drain the tank, right down to hearing the twist of the drain valve.

In other words, if you happened to walk by the booth yourself that day and saw some guy on the floor, that would have been West down in a basement fixing a water heater.

“I actually learned something that I could do with a clamp meter that I’d never learned before,” West says. “And I thought, heck, I thought I knew electric water heater repairs like the back of my hand.”

As a result of the booth visit, West’s crew at Chris West Plumbing Inc., Jonesboro, Ark., now train every Thursday morning for 90 minutes inside the company’s brand-new training center putting this virtual training platform devised by Interplay Learning, Austin, Texas, through it paces.

“I call it ‘accelerated skill acquisition,’ ” West says of the Interplay platform. “The old model of training was a lecture in a classroom, reading a textbook on your own and then hands-on experience,” West says. “That’s fine, and we’ll also do that, too. But often that seems like ‘one and done’ to the techs.”

Plus, often techs, no matter how experienced, might be limited to actually getting hands-on experience working on all types of products they’re likely to encounter.

“This really helps with increasing comprehension and while we might be doing this in virtual reality, it helps build muscle memory for real-world service calls,” West explains.

Since 2016, Austin-based Interplay has been leveraging immersive learning technology that allows plumbing and HVAC contractors to offer training and practice hands-on learning from a desktop, phone, tablet or in virtual reality. Its digital learning platform, SkillMill, conveniently turns any space into a training lab with its short video courses, 3D simulations, knowledge checks, coaching and connectivity.

The result is a highly trained employee who is job-ready in weeks, not years.

“The beauty of Interplay is I can hire a high school graduate, and he can really pick up a lot of information across the board in a fast amount of time,” West adds. 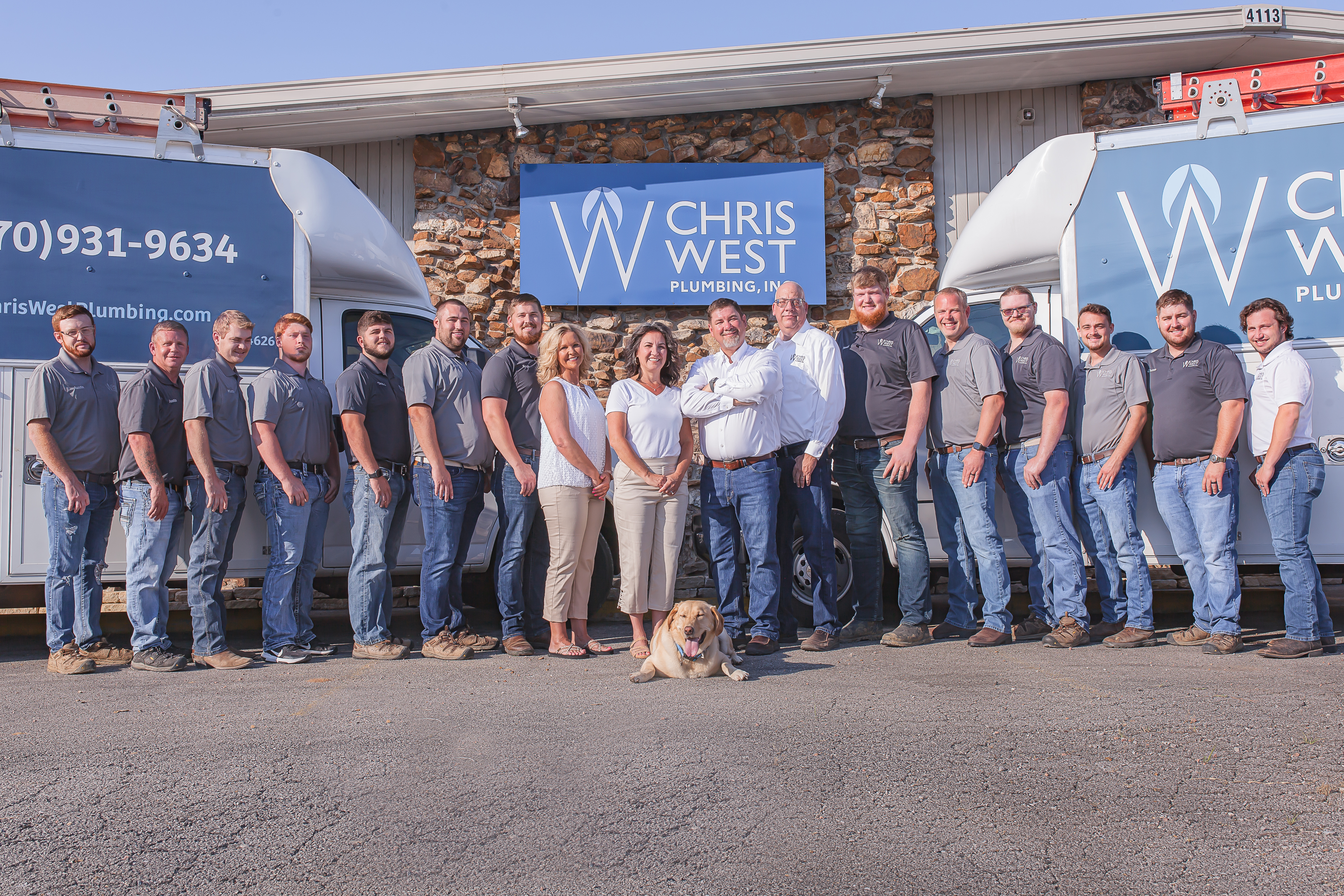 “We can put your brain in a space that mimics a real-world environment and repeats scenario-based training,” says Doug Donovan, founder and CEO of Interplay. “That’s very different from reading about it in a textbook or sitting at a computer. The fact that you can recreate that space is a powerful tool for retention and recall.”

Right now, West only has one special headset so techs take turns using it. But everyone else sitting inside the training room can easily follow along thanks to a large monitor tied into the platform.

Plus, he purposefully built out his new 1,200-foot training room with Interplay in mind. In addition to the big screen, the room features an upgraded sound systems, plus a granite-topped conference table West bought from a local bank.

“From the moment they walk in the door to the time they go home,” West explains, “I want our techs to have their heads up high. So we wanted our new training room to look like any other professional facility. We want that same level of professionalism.”

For example, West says the Interplay portion of his 90-minute weekly training session takes up about a half hour. The rest of the time is spent sharing weekly reports on sales and other financial metrics. He’ll have reps come in to demo products. He’ll even copy pages of PHC News to pass along to the techs.

West also features an element to training that we haven’t heard before, which he calls “the culture of vulnerability.”

“I don’t want to necessarily be the guy who brings up what a tech did wrong,” West explains. “I want the techs to feel safe and stand up and say that they don’t know how to install this new toilet where the bolts are purposefully hidden or that here’s a problem that came up yesterday for me on this one job.”

It’s OK to “step in it on occasion,” West says.

“One of the things that’s been the hardest for me as a business owner is to give everyone room to fail,” he adds. “Yes, there’s catastrophic failure, and we don’t leave room for that. But micromanaging doesn’t work either for a company this size.”

West started working in the plumbing profession alongside his dad.

“My father was 5 feet tall,” West says, “but he was a giant to his clients. That generation really respected their mechanics, their butchers and their plumbers.”

After working for his dad for a decade, West opened his shop in 1999, and has since grown in size to 12 techs in the field doing mostly residential service and repair.

“I think the one word to describe our company is ‘care,’ ” West adds. “We care about your home like it was our own grandmother’s house. I’ve just learned over the years that if you take care of someone right, than we end getting bigger jobs since we’ve gained that rapport.”

Since he describes his crew as “jacks of all trades,” West knew he needed to focus that much more on training.

“I want to offer the same chicken salad sandwich north of town as we do south of town,” West adds.

His reliance on Interplay is fairly new; we heard him talk about his plans to implement it while he spoke during a panel discussion at last year’s PHCCCONNECT in Kansas City, and figured it would make a great cover story for this year’s CONNECT.

“I think I’m becoming more of a psychologist since we started using Interplay because I notice how some of our techs prefer a certain learning style,” West explains. “Maybe one tech hears something and gets it. Another might pick it by seeing me draw it on a whiteboard. And many just want to put the fittings on the floor because they’re more hands-on.”

For example, let’s revisit electric water heater repairs. While West learned a trick when he first donned the headset at a tradeshow, he’ll also wheel in a unit inside the classroom and let his crew take it completely apart and back together again.

“We really train hard on these products since apprentices can have a hard time grasping electric water heater repairs so we want to go through all the functions and troubleshooting in class with a real water heater and also a water heater in virtual reality,” West adds. “That’s the beauty to using Interplay – it’s another layer that builds on top of traditional classroom and hands-on training thanks to the simulated training.”

While the headsets are a game-changer to create realism surrounding the tasks, challenges and techniques involved in skilled trades training, it’s not the only way Interplay provides West with methods to train his crew.

For example, Donovan adds that most of his plumbing and heating contractors make due with Interplay’s series of on-demand, video-based lessons.

“It’s a flexible way to provide bite-sized learning opportunities to technicians that they can utilize when and where their schedule permits,” Donovan explains. “In most cases, learners can complete online training from a basic laptop.”

In many situations, learners can even use a mobile device such as a smartphone or tablet to access online training, allowing them to complete courses whenever and wherever they are.

“That can make for a perfect way to take advantage of downtime between service call appointments,” Donovan adds.

Here, too, though, Interplay’s modules feature what could best be described as a first-person video game with the typical point of view perspective.

In fact, Interplay uses the same technology behind any major video game. Before that, the technology was once reserved for only the military, medical and aviation industries. Donovan introduced his first 3D simulation training product for residential energy auditors before moving on to the residential and commercial MEP industry.

With most every PHCPPro struggling with the labor shortage, Donovan believes that one of keys to the demand for his product is to recognize that “we have to approach people with tools they’re comfortable with, with what looks and feels like the life they’re already living.”

Hence, that means programs that teach on laptops and cell phones and borrow heavily from video games.

In 2020, according to the U.S. Bureau of Labor Statistics, 59 percent of the available U.S. workforce was between the ages of 19-39. Referred to as “digital natives” or the “digital-first generation,” this demographic is used to a world more connected with technology than ever before. 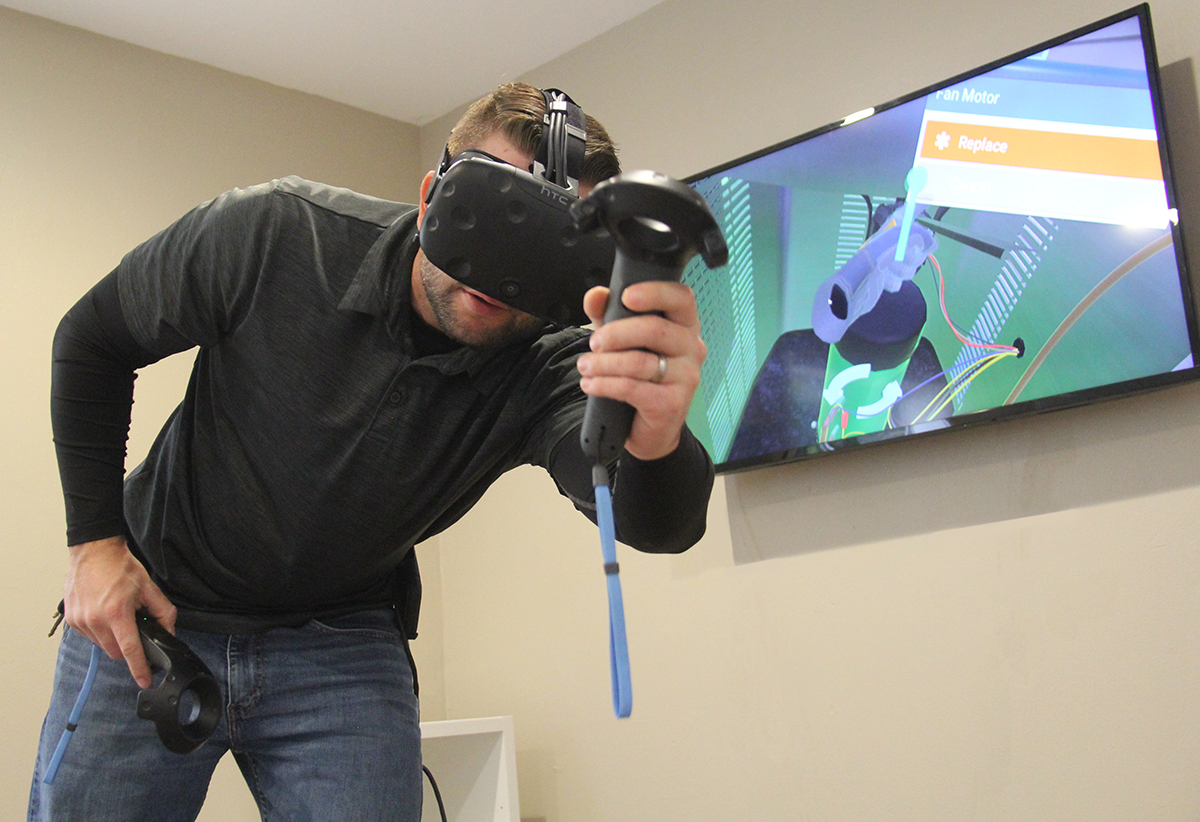 “They do everything on their cell phones, whether it’s ordering a pizza or finding out the answers to questions,” Donovan says. “You have to start with digital, whatever it is you’re teaching.”

Taking a further look at the modules also reveals that the “gamification” concept from video games is incorporated through earning points as techs further complete the sequence of training.

Outside of class, West relies on his techs to work on the modules on their time. A dashboard helps everyone keep track of where everyone else is and can be a further reason for adding similar competition that often appears in leaderboards for video games.

At the center of this technology is a customizable dashboard that provides a comprehensive, at-a-glance view into a plumbing and heating (and electrical) tech’s current skill level, training progress and field-readiness. While we’re emphasizing training for this feature, the platform also can help service companies schedule the right techs for the right jobs.

The Interplay platform also includes a helpful pre-hire assessment test that can help accelerate the hiring process. And once a tech is on board the assessment test also can generate a report that explains what areas the new hires need to improve upon and can determine a lesson plan using the courses.

“Not only do pre-hire assessments assist your team in making better hires quicker, they also provide a head start for onboarding new hires,” Donovan adds. “When you’re aware of what areas new hires need additional training in from day one, you can customize their training to begin in that subject matter area rather than onboarding them to a generalized training curriculum.”

Thanks to the information gleaned from the dashboard, West says: “I can tell who’s gung ho. And I can tell who might need a little nudging.”

While the new members of West’s crew might fall into the digital native demographic, West also believes that his seasoned techs can all benefit from  the simulation training.

“Interplay is always expanding its modules,” he adds. “So I think it’s a very handy resource for the crew, particularly if they know a job is coming up where it might be something they could brush up on. The night before, they could always go online and get a refresher course.”