A strategy to reduce convective heat transfer at the ice surface for hard, fast and energy-efficient ice.

Growing up as a rink rat on the outdoor ice hockey rinks of Duluth, Minn., I learned to love the hard, fast ice that Mother Nature provided. The clap of a puck hitting flat on the ice or the sharp grinding of a skate blade digging in — these are the sounds that told you the ice would be good.

The heart and soul of every ice rink is the ice plant. At 45% of the building’s total energy consumption, it is generally the focus of any energy conservation measure. However, often those efforts are wasted due to other factors or loads causing the ice plant to work harder than necessary: the building envelope, lighting, spectators, resurfacing, etc.

Those heat loads can be broken down into three basic components: conductive loads, radiant loads and convective loads. Conductive loads include heat gain from the ground into the piping, the floor pumps and ice resurfacing.

In addition to improving the convective heat loads through the HVAC system, energy-efficiency improvements concerning the other loads also should be considered when designing ice rinks. These improvements could include low-e ceiling or dimmable LED lights to reduce radiant loads, and variable-speed pumping or condenser heat recovery to reduce conductive loads.

According to ASHRAE research project RP-1289, the convective heat transfer may be as much as 28% of the total heat load on the ice plant. These loads are directly related to the air temperature, relative humidity and air velocity at the ice surface. Controlling each of these factors is important in maintaining ice quality and minimizing energy costs.

In convective heat transfer at the ice surface, Newton’s law of cooling defines the rate at which the ice gives up heat to the surrounding air volume. This can be estimated by the equation in Figure 1 from the ASHRAE Handbook—Refrigeration, Chapter 44. 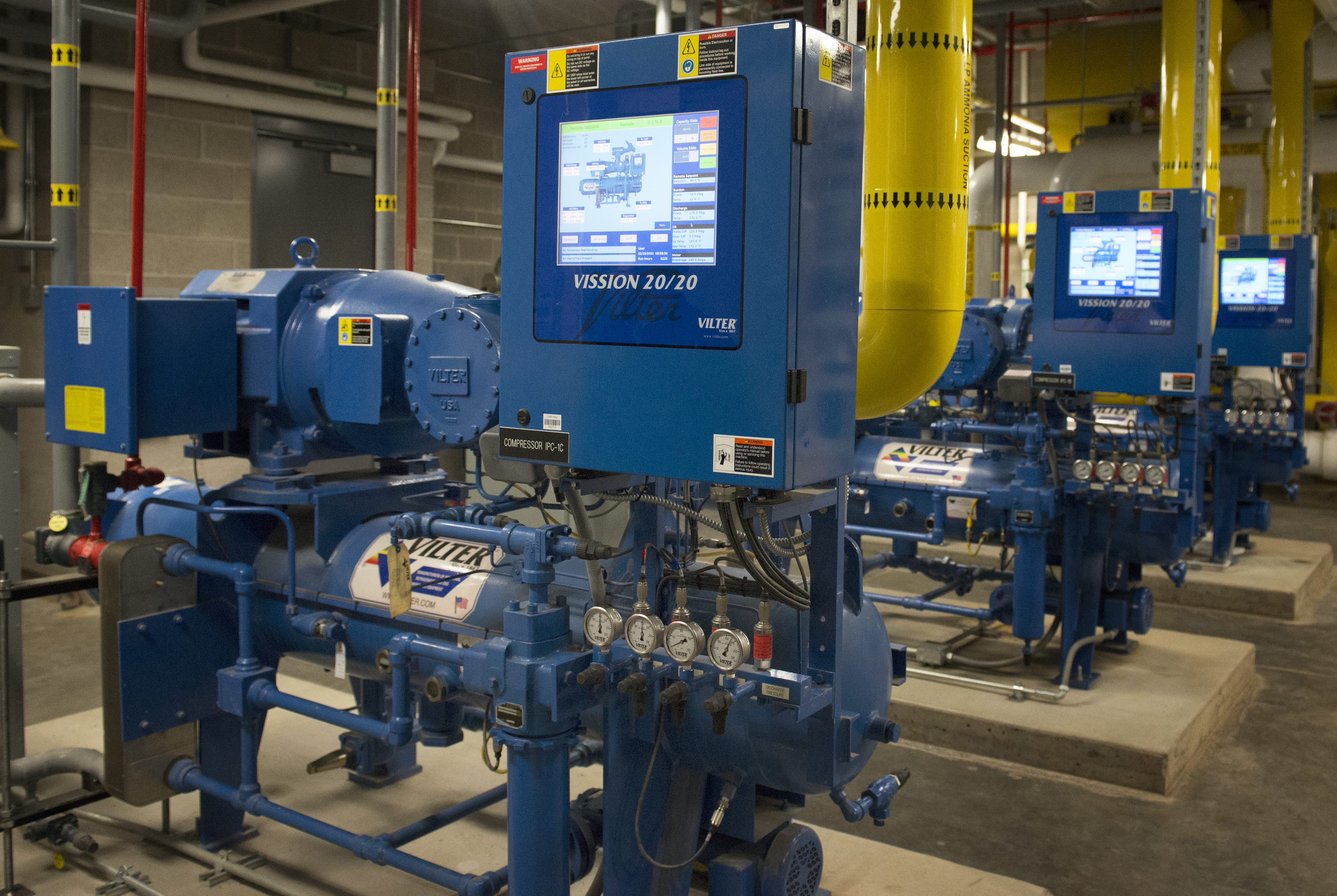 When looking at the optimal air temperature to increase efficiency, it would seem that the coldest air temperature possible would result in the most efficient system. However, occupant comfort must also be considered. Ice hockey players and figure skaters will be under constant physical activity; colder air temperatures may not be a problem for them. However, the spectators in the stands will be sedentary and the cold will be very uncomfortable.

In small recreational facilities, infrared radiant heaters can be provided for spectator seating. Radiant heaters are an excellent solution in this application because they can provide occupant heating without increasing the ambient air temperature.

Radiant heaters should only be placed over the seating area and always directed away from the ice surface to prevent any impact on ice quality. Supplemental heating will be needed at the rink dehumidification unit to prevent the overcooling of smaller facilities. (Dehumidification system design will be covered later in this article.)

Application of radiant heaters in larger arenas is not feasible, so occupant comfort will need to be accomplished through the air system. The National Hockey League standard for arenas is to maintain an air temperature of 60 F with a dew point of 32 F.

In arenas, temperature control will be accomplished through the arena bowl dehumidification units with the referenced temperature sensed at ice level, ideally located near the return air inlets. The bowl air systems should be designed to limit temperature creep during hockey games to 5 F, with a maximum dew point of 40 F for good ice quality in the third period.

If the reference temperature exceeds 65 F by the end of a game, pre-cooling the bowl before the next game should be considered. Pre-cooling to 55 F pre-game will help ensure good ice quality late into the third period.

The designer should also consider the possibility of condensation at the building roof structure; a portion of the supply air may need to be directed up toward the structure. An example of a typical arena air outlet is provided in Figure 2.

Low air returns located at ice level in the four corners of the arena encourage airflow down and away from the ice surface. The designer can also reduce air velocity at the air outlets by drawing air down and across the seating area.

The phase change of water represents a significant heat load that can be minimized through the design of the HVAC systems. As noted previously, the environment within the ice rink should be maintained at a dew point between 32 F and 40 F. Even with an ambient air dew point of 40 F, the localized dew point at the ice surface will be lower; condensation should not be a factor.

Designers of ice rink dehumidification systems must complete a full accounting of all the moisture sources within the ice rink to ensure adequate dehumidification capacity. These sources include permeation through the building envelope, occupant load, water vapor from ice resurfacing, infiltration from uncontrolled areas and outdoor air ventilation.

In small recreational facilities with few spectators, the bulk of the moisture load will be associated with permeation, ventilation and ice resurfacing. In general, this can be handled with a small, packaged desiccant dehumidifier. These packaged dehumidifiers are provided with an active desiccant wheel and gas heat for both space heating and desiccant regeneration.

In arenas where the quantity of spectators is significant, the bulk of the dehumidification load will be associated with the moisture let off by the spectators and the outdoor air ventilation required for the spectators. Arena dehumidification systems will generally consist of one or more large dehumidifiers with active desiccant wheels, gas heating for regeneration and heating/cooling coils for air temperature control.

The number of hockey games with spectators in every seat represents a small portion of overall arena usage, so the designer should consider the use of a demand control ventilation sequence to reduce the quantity of outdoor air provided during low-occupancy practices and events. An effective demand control ventilation strategy will significantly reduce the energy cost associated with the dehumidification systems and increase ice quality.

Indoor ice rinks are energy-intensive buildings; when operators look for ways to cut energy costs, they typically focus on the refrigeration system, which could unintentionally hurt ice quality. Often, however, a poorly designed HVAC system is the culprit and makes the ice plant work harder than necessary.

Kyle Wilson, PE, LEED AP BD+C, is the market leader for sports and recreation at IMEG Corp. He is responsible for designing sports arenas and other building types and has expertise in designing ice rink refrigeration systems, building HVAC systems, building management systems and plumbing systems for ice rinks and ice arenas.

Design Engineers & Specifiers How To HVAC
You must login or register in order to post a comment.