The story of a huge mansion with a large driveway — and a tiny patch of snowmelt.

It made no sense to me. They had enough money to do whatever they liked and then some. Huge mansion-type home in the North Shore suburbs of Chicago, complete with a full-size indoor gym, theater and maid’s quarters. Who am I to tell them about cost-saving measures for their hydronic systems that would save them money and aggravation down the road?

Screwed up hydronic system? Call the house manager, who then calls me — and I found plenty of room for improvements. Boilers leaking; improper near-boiler piping; some much-needed control upgrades; brown, sagging PVC vent; and the lack of condensate neutralizers. Those were no-brainers, but one stood out like a daisy-fresh rookie at a supply house counter. You couldn’t miss it.

This 15,000-plus-square-foot shack and its entire hydronic system of old condensing boilers (no modulation), radiant floors and two 120-gallon indirect water heaters filled with a polypropylene glycol mix. By itself, it’s not a problem, but the fact that it’s all because of a 625-square-foot chunk of snowmelt outside one of their garages is.

Out of a 3,000-square-foot driveway, someone thought it was a good idea to fill the entire 625-square-foot system with glycol? I’m not sure why the other 2,375 square feet of driveway was left for snow shovels, but that’s only one of many vertigo-inducing problems in the room. The house manager told me the glycol mix was original to the house, and nobody ever told him it needed to be maintained.

Why didn’t someone, anyone, suggest a brazed plate heat exchanger for those petty 625 square feet of snowmelt driveway? The house will never be unoccupied. Between the house manager, the revolving door of maids and the boiler redundancy, there’s not a snowball’s chance in a towering inferno that the house will ever experience a freeze-up. None. Nada. Zilch.

When you add up all the 5-gallon buckets of glycol mix I’d need to drain and replace, and the time to do it, I figure it might be one the easiest sales I ever made. Sure, there will be the additional circulator, expansion tank, relief valve, pressure gauge, air separator, fill/purge port and, of course, the heat exchanger — but this is an easy decision because it’s the right one.

It’s easy to explain to the customer, too. One little, tidy snow- and ice-melt prefabbed board off to the side, completely isolated from the rest of the system, and everything’s set. Right? Am I missing something?

I don’t pretend to be the know-all, end-all, go-to-guy on brazed plate heat exchangers. That’s not how I roll. If you’re looking for Bernoulli’s equation on fluid theory and computational fluid dynamics, you won’t find it here. What I do know is this: Our industry offers ample applications for these handy components, and I’ve been able to incorporate them into many systems throughout the years (see Figure 1). 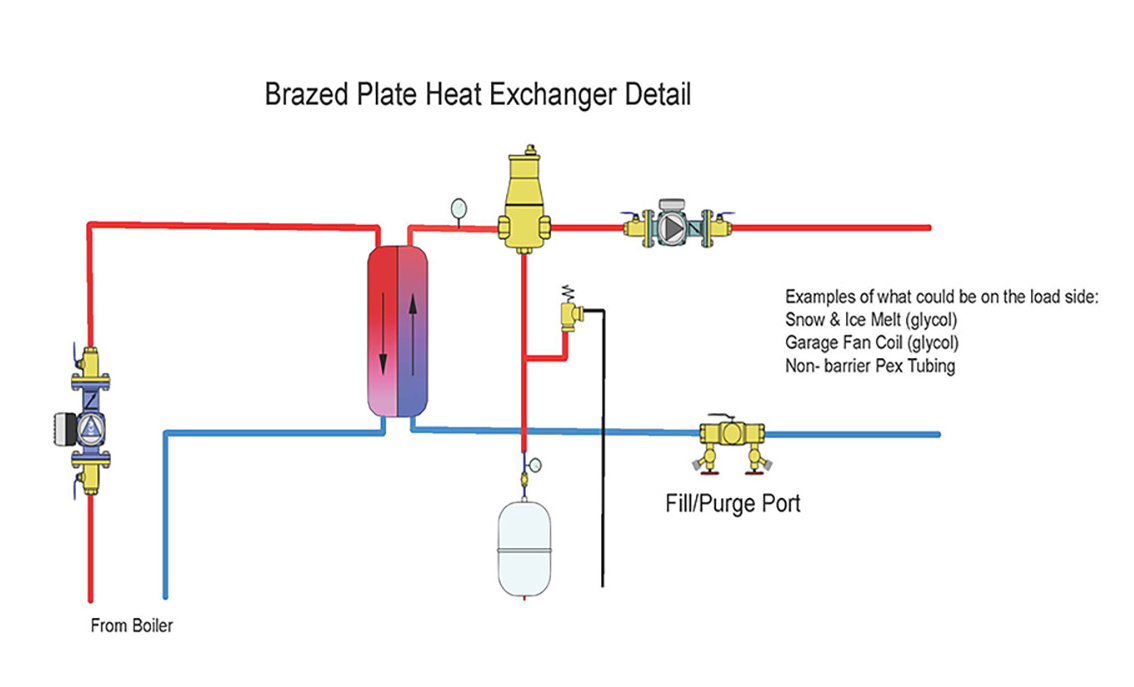 Here’s a sampling of how they can be used and a typical set-up for a simple system:

• High-temperature hydronic heating, such as fan coils in garages.

Some things about the construction of these compact, high-heat-transfer heat exchangers we should know. They are typically made from 316L stainless steel and brazed together with copper, although nickel also is used. They consist of two cover plates, one at each end.

We typically use a single-pass, brazed plate heat exchanger, which means all four pipe connections are on one side. Between them is a series of corrugated channel plates designed to increase turbulence, creating optimum heat transfer. The size of the heat exchanger and the number of plates depends on the application, temperature differences, mediums (water or glycol), flow rates, pressure drops and capacity in BTU/hr.

It’s important to connect the pipe to the right ports, as Figure 2 shows. Also, notice that the hot side of the heat exchanger is around its perimeter. This is to avoid any potential condensation of the cold-side flow channels.

Usually, I don’t rely on charts to size a brazed, flat-plate heat exchanger, although there’s nothing wrong with them. You need to make sure to check the hot side water temperature used on them. Most are set up for 180 degrees; anything lower is going to change the heat exchanger size.

I prefer to use manufacturer sizing software programs available to everyone — and there are plenty of them. All you do is plug in a few of the necessary criteria and the program does the rest, giving you more than one option. A quick Google search will get you where you need to go.

When I install these heat exchangers, I prefer to set them up to make servicing and flushing as painless as possible (see Figure 3 for a partially installed unit). Install it as if you’re the one who’s going to service it. The turbulent flow helps to keep them clean, but the passages are small, and it doesn’t take much to make flow and efficiency suffer. I use ball valves and boiler drains at each port; it’ll make any future work a breeze.

Even if it’s not you, I’ll bet the next service tech will be forever grateful for your awe-inspiring foresight.

Mounting them should be easy. If they don’t include mounting tabs or a bolt-through design, you can make an iron bracket or shelf to support them. If they’re relatively light, I support them by way of strut-and-strut cushion clamps on the pipe attaching to it.

Check out Figure 4 for a small brazed plate heat exchanger I still have from my contracting days. Somehow, someway, I’ll find a way to make it useful on my system out here in Vegas.

It’s small, but under the right conditions, it’s capable of delivering 125,000 BTU/hr. for a radiant heating panel or snowmelt system. The snowmelt systems I designed and installed back in the Chicago area would typically require 125 BTU/hr./ft.2, give or take. 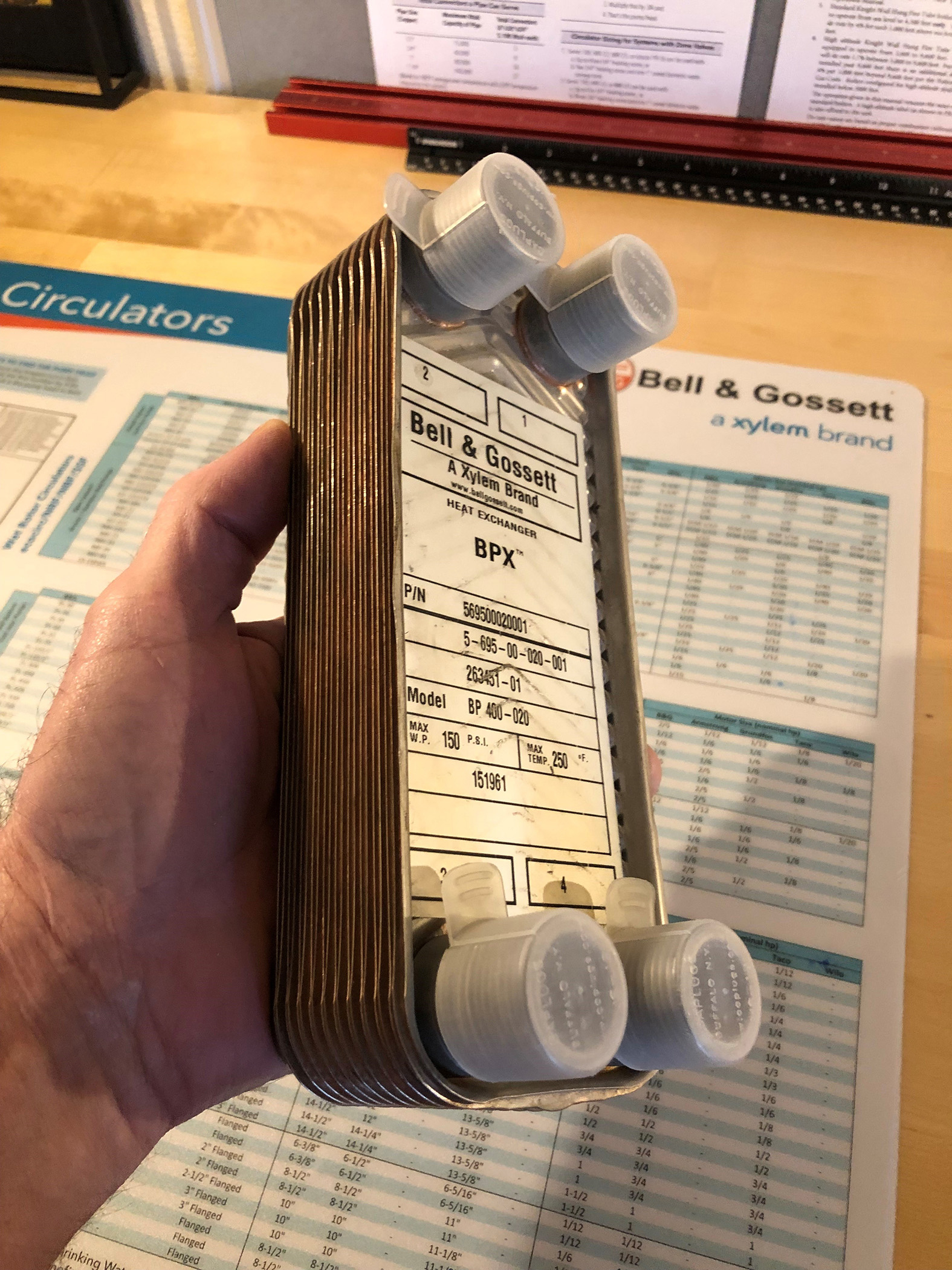 It’s strictly a coincidence that the numbers worked out so clean and round. It’s also a coincidence that, under the right circumstances, this very same brazed plate heat exchanger would be a good fit for that 625-square-foot snow- and ice-melt system. As I said, this sale should’ve been an empty-net goal. Huge upside to it, and not a single negative I can think of. Not then, not now and not four years later.

In most households, one or two people make the decisions. Often one party has a higher degree of self-importance; with that comes a louder voice. When I made my suggestions, my goodness! You’d think I was asking if I could schedule a weekly game of 5-on-5 basketball on their full-size Chicago Bulls-replicated basketball court.

Less than five minutes into presenting the perfect sales pitch for perfectly good reasons, this man accused me of being arrogant and obnoxious. I responded by letting him know I haven’t been that person since I quit drinking more than 18 years ago. In hindsight, it was probably something I should have kept to myself. That being said, I was the quiet man in that conversation. Insecurity is loud; confidence is quiet.

Well, as I’m sure you guessed by now, what I thought would be the perfect sale crashed and burned spectacularly. And I was neither arrogant nor obnoxious. I was professional, well-prepared and sincere. The entire umpteen-thousand square foot home still has a glycol system throughout — all because of a relatively small piece of concrete and an owner who was convinced he knew more about hydronics than I did.

My digression aside, I still believe we need to offer solutions and better options to building owners for their own benefit. The brazed plate heat exchanger option could have been, should have been, an easy one to move forward on, but that’s the way it goes sometimes. And on your next chance, I hope this little anecdote has you better prepared.