Utilities in key areas around the country are looking at this eco-friendly energy source to provide more resiliency in the power grid.

The goats huddled together for warmth, turning from a biting wind that whipped across the snow-patched hills of the Olivette Farm in late January this year. It reminded me that even in North Carolina, heating systems are a necessity in winter. I was glad to come in from the cold and warm my brittle fingers while Scott Austin explained the geothermal system requirements and pesticide-free, farm-to-table food benefits of his new development near Asheville.

The 4 1/2-acre organic farm provides 27 boxes of healthy food to 90 families each year, with about 75 percent of them choosing to build houses in the 346-acre Olivette planned agri-hood community. It’s located along the French Broad River and offers trails, community gardens, a flower farm, an amphitheater, a community center, a large private island, and modern amenities such as fiber broadband internet.

The concept is trending as about 100 developments in the United States fall into the agri-hood category.

I wrote about Olivette in 2021 and was finally able to visit and chat with the development team and a few of the residents. Sometimes projects are overhyped online and turn out to be an iffy experience for homeowners, but clean-energy communities are usually characterized by attention to detail and a sincere commitment to residents. That was very much in evidence at Olivette; people running on the trails or walking their dogs on a chilly morning were still happy to stop and share their satisfaction. 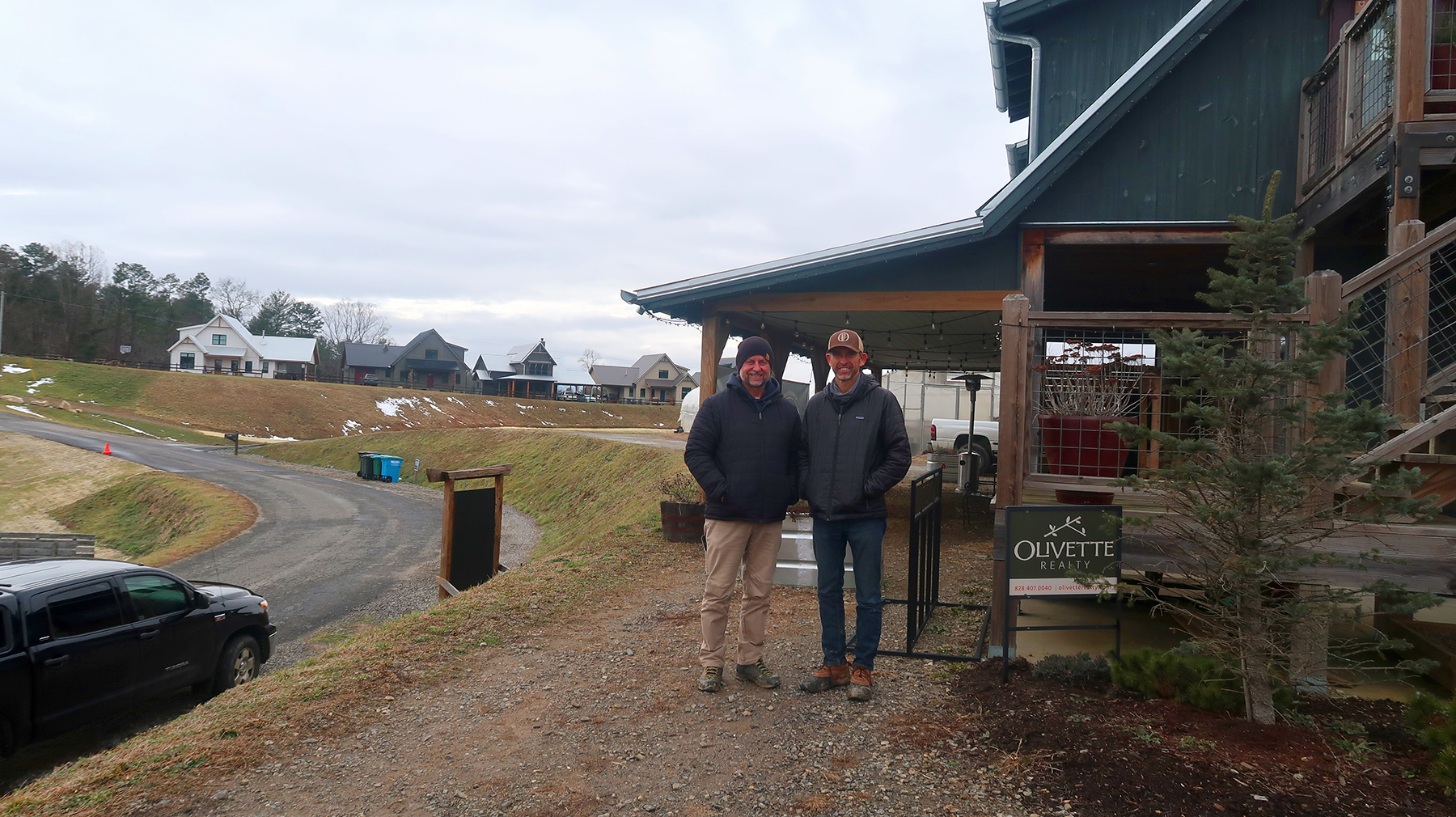 “From the beginning, we wanted to create a healthy place and to honor the river,” Austin says. “Our philosophy is to protect nature and expect quality. We’re only going to build these houses once, so we decided to ask homeowners to do it right in the first place.”

Each home must have a HERS rating of 52 and include geothermal as its primary heating system, with a closed-loop requirement to protect the local land and water. “The architectural guidelines are right in the deed,” Austin notes. “I believe it’s the only way to go.”

Winter also happens further south, in Texas. We have been more aware of this since February 2021, when below-zero temperatures there led to power blackouts, pipe bursts in homes and more than 200 fatalities.

Despite some reports to the contrary, change is coming in the Lone Star state. Millican Reserve is a new 2,500-acre residential and commercial geothermal district in the Brazos Valley near College Station. It was developed by the same people who created Austin’s Whisper Valley, using a similar shared geothermal system model.

While large geothermal developments from private developers are encouraging, it is even more clear where we’re headed when utilities spring into action because they are well-known for slow responses to emerging movements. However, that is changing, and quickly, across the country.

A case in point is a Massachusetts decarbonization mandate that has led to three public utilities conducting geothermal projects that will likely lead to wider adoption of the technology. In early 2021, Gov. Charlie Baker signed a bill described as “An Act Creating a Next-Generation Roadmap for Massachusetts Climate Policy.” By 2050, emissions must be net-zero compared to 1990 levels.

Gas utilities are studying a new business model: replacing neighborhood gas pipeline networks with pipe that captures and shares geothermal energy. Eversource, National Grid and Columbia Gas are working on geo-districts, and 14 utilities formed a data-sharing group to help chart the path to renewables together. They say these initiatives will help gas workers keep jobs with some retraining, allow utilities to maintain control over energy distribution, and eventually lower costs for
customers.

Despite incentives and tax credits, drilling boreholes and laying pipe still put geothermal systems out of reach for some U.S. homeowners and businesses. However, gas utilities are already experienced with excavating streets and laying pipe. They can spread the cost of the work across their customer base and realize great efficiencies through shared systems.

Ryan Dougherty, president and CEO of the Geothermal Exchange Organization, a key U.S. industry group, told me in March that he sees “quite a lot of interest in geothermal on the part of investor-owned utilities.”

Eversource seems to be the most sincere in its efforts. It has already advanced a $10.2 million, three-year project in Framingham, Mass., a Boston suburb. It is signing up residential and commercial customers in one community and is paying for the installation of the geothermal system, ground-source heat pumps and other equipment inside the buildings.

Participants will pay a low, fixed charge each month for access to the geothermal network, which is expected to result in up to 25 percent savings on energy. Construction will begin this summer.

Eversource’s Director of Clean Technologies Nikki Bruno says the utility will expand well beyond this first effort. Eversource is the largest utility in New England, providing 3 million customers with gas, electricity and water. Its website says: “Did You Know: Using geothermal energy for heating and cooling can reduce the average residential customer’s carbon emissions by up to 60 percent?”

National Grid describes its plan as “a low-carbon heating solution for customers and an alternative that avoids replacing ‘leak-prone’ natural gas pipe that contributes to greenhouse gas emissions.”

It says the focus will be on converting natural gas customers to geothermal energy in low-income and environmental justice communities. It also says customers will save money and assembled a group of 10 homeowners in the Glenwood Village area who will become part of its project.

Both Eversource and National Grid say these systems are unique because they are networked together with time-shifting and peak-shaving software to optimize the micro-grid. While private developers have done this, as discussed previously, they say they are the first utilities to try it.

Fewer details are available from Columbia Gas, which said only that a pilot is slated for the Merrimack Valley, an area in northeastern Massachusetts hit by a series of gas explosions and fires in September 2018. Federal investigators blamed the events on poor management by the utility. The $56 million settlement the company agreed to in 2021 included $4 million to implement a geothermal test project. No other details have so far been announced.

Utilities in other states are also making moves, often due to decarbonization mandates. In 2018, Illinois changed its Energy-Efficiency Portfolio Standard to allow fuel switching and made revisions to its Technical Resource Manual.

New York state battled its gas utilities to a truce using geothermal stimulus, rebates and private sector installation partners as weapons. Now the utilities are moving into the geothermal business, too. 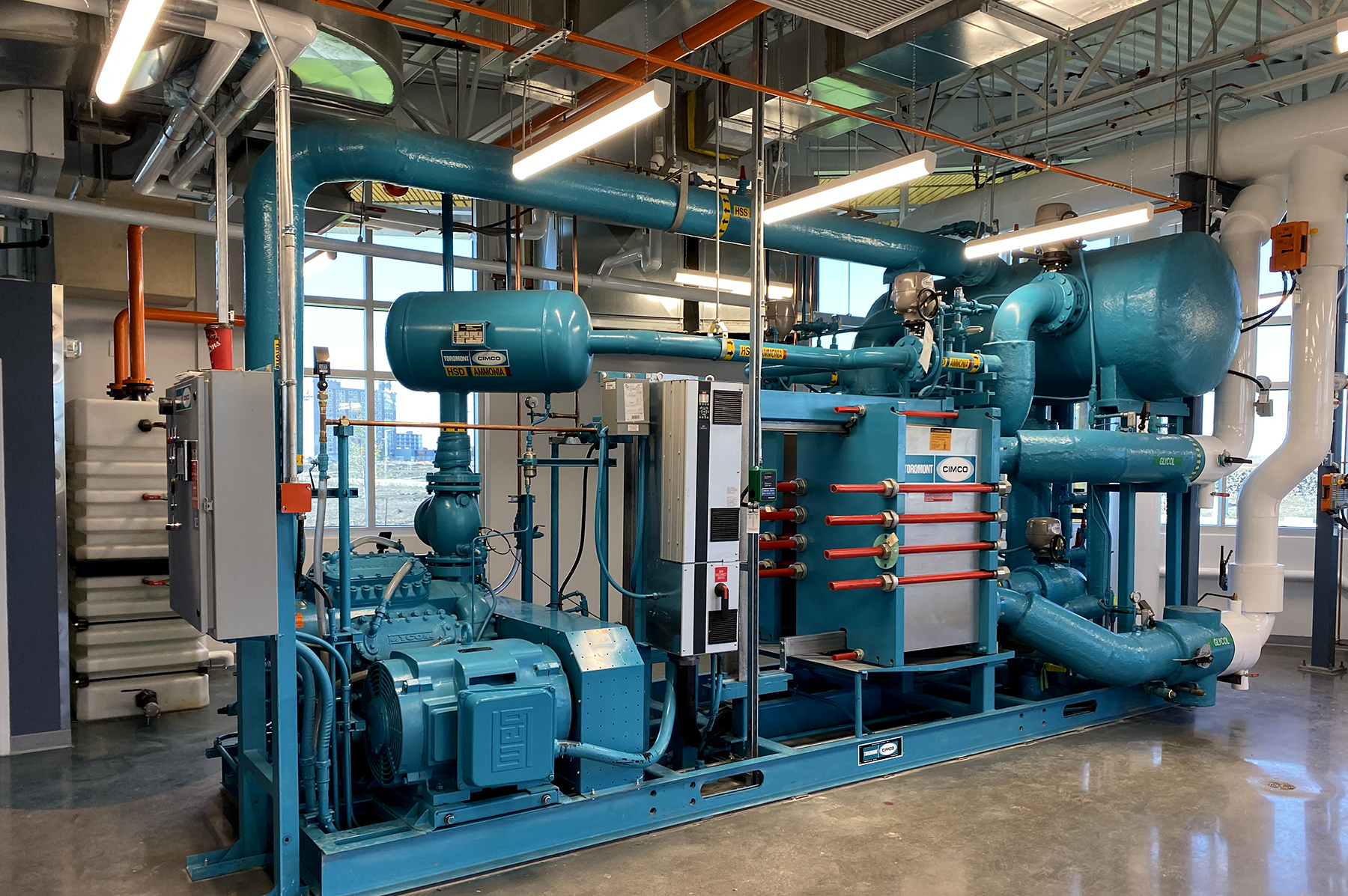 A key player in that effort was Dandelion Energy. This year, I was allowed to shoot video on-site at a Dandelion drilling operation at a Connecticut house. I consider it an honor because Dandelion is safety-obsessed; I had to follow a lot of rules in order to get my footage.

All three floors of the 3,500-square-foot home, located on a fairly tight suburban lot, are now heated and cooled by a six-ton, ground-source heat pump following the drilling of two 420-foot boreholes beneath the driveway.

The update on Dandelion is it has now installed more than 1,000 geothermal systems, mostly single-family home retrofits replacing gas systems in all parts of New York state and southern Connecticut. It has begun accepting orders in Massachusetts.

Dandelion’s new marketing director, Vinay Sharma, told me it is a mission-based company seeking to spread geothermal across the nation; he believes this is becoming more and more possible. In my view, the great thing about Dandelion and companies similar to it is they made geothermal affordable for average homeowners. They found ways to cut overall costs but, more importantly, they established sophisticated financing programs working with banks in each area.

In most cases, homeowners can choose to have the system installed with no money down by committing to a 20-year monthly payment that is equal to or less than they were already paying for gas. In the current environment of spiraling gas costs, this has become a real advantage.

Dandelion cannot keep up with its orders. Geothermal is booming in some regions. For obvious reasons, the company chooses expansion areas according to the availability of utility or government incentives and the existence of state clean energy mandates.

The opening of a larger suburban airport a few years ago in the growing Canadian city of Edmonton, Alberta, created an opportunity for the municipality to make a statement about its renewable energy future. It decided to create a 536-acre downtown demonstration community for 30,000 residents. Builder requirements include geothermal as a primary heat source; energy recovery ventilators; tight, insulated building envelopes; on-site solar; and electric car chargers.

Virtually all will be heated and cooled with ground-source heat pumps, 10,000 to 15,000 in all, fed and boosted by the central plant. It has its own 1,000-kW heat pump, plus 570 boreholes, each 492 feet deep. High-density polyethylene piping at 24 inches in diameter runs below the roadways, with supply lines connecting to each building.

The system I’ve described will be replicated four more times for a total of five energy centers providing geothermal, plus another one tapping into recovered effluent energy.

In addition to touring projects full of climate-solution success stories early this year, I visited one not-so-happy place — Mayfield, Ky. A tornado wiped out most of the town in December; it was not a fun photoshoot.

Kentucky has never seen multiple EF3 tornadoes (with wind gusts of 136 to 165 miles/hour) in the normally quiet month of December. More than 40 tornadoes were reported across nine states, killing 88 people in the South and Midwest. Federal Emergency Management Agency Administrator Deanne Criswell said on CNN: “This is going to be our new normal, and the effects that we’re seeing from climate change are the crisis of our
generation.”

These days it seems as if intense storms, heatwaves, fires, floods and winter storms can happen anywhere at any time. The good news is that utilities, states, cities and developers are reacting more to extreme weather and oil wars and decarbonizing communities with heat pumps, heat pump water heaters, induction cooktops and ground-source heating and cooling systems.