Our aging infrastructure has been the focus of city maintenance efforts for many years. As of 2020, the average age of the 1.6 million miles of water and sewer pipe in the United States is 45 years. Cast-iron pipe in at least 600 towns and counties are more than a century old, according to industry estimates (https://nyti.ms/3Ikzxqt). Focusing on piped infrastructure is in the interest of public health and safety.

Much of the nation's piped infrastructure is crumbling. Even the younger and more recently installed pipelines are in varying stages of disrepair. The needed staff and funding for these pipelines have been lacking over recent decades.

The United Association of Journeymen and Apprentices of the Plumbing and Pipe Fitting Industry of the United States and Canada says it is experiencing record-high requests to provide more pipefitters for infrastructure projects throughout North America. 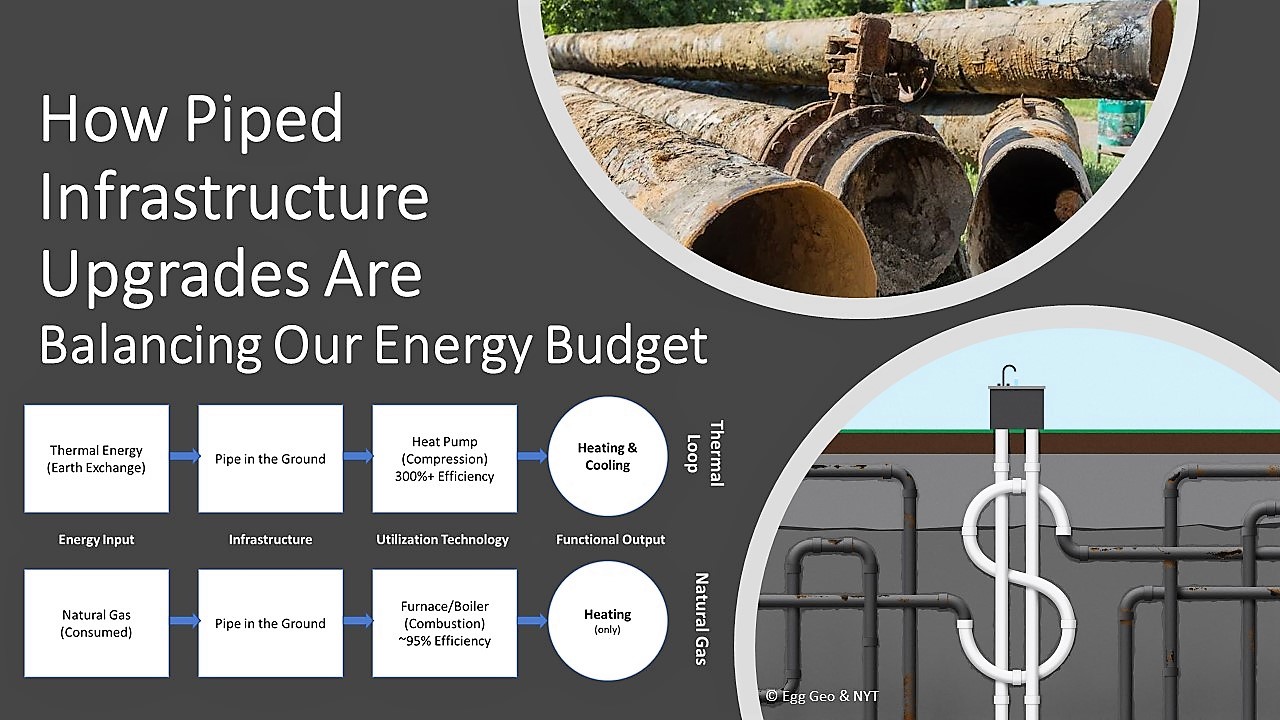 It is common to see iron and steel piping in early infrastructure pipelines. Although these are robust materials, their lifetimes are limited by the effects of moisture and soil that deteriorate these metals. Newer materials such as plastics and polymers are extending the lifetimes of piping infrastructure to 50, 70, even 100 years or more, notes the Plastic Pipe Institute (https://bit.ly/3rr0O3y).

When we identify the types of piped infrastructure, the main categories include drinking water, wastewater, stormwater, reclaimed water (for landscape irrigation), hot water, steam, and combustible fuels such as natural gas.

Considerable costs and labor will be spent on infrastructure upgrades over the next 20 to 30 years. During this time, many of these upgrades will include thermal energy networks, which will take the place of most combustible fuel pipelines such as natural gas.

The damage many communities have suffered due to environmental injustice over the last century is remarkable. The cost to upgrade the infrastructure in such communities is minor compared to the ongoing costs of environmental damage and the related health and basic welfare challenges.

Many of these communities are in inner cities that use incinerators and combustion boilers presently or in the past to create heat. Emissions from incinerators, boilers and generators were identified as contributing to medical conditions that seemed to be centered near these energy plants, as reported by the Sheridan Hollow Alliance for Renewable Energy (https://bit.ly/3nPbAwR). 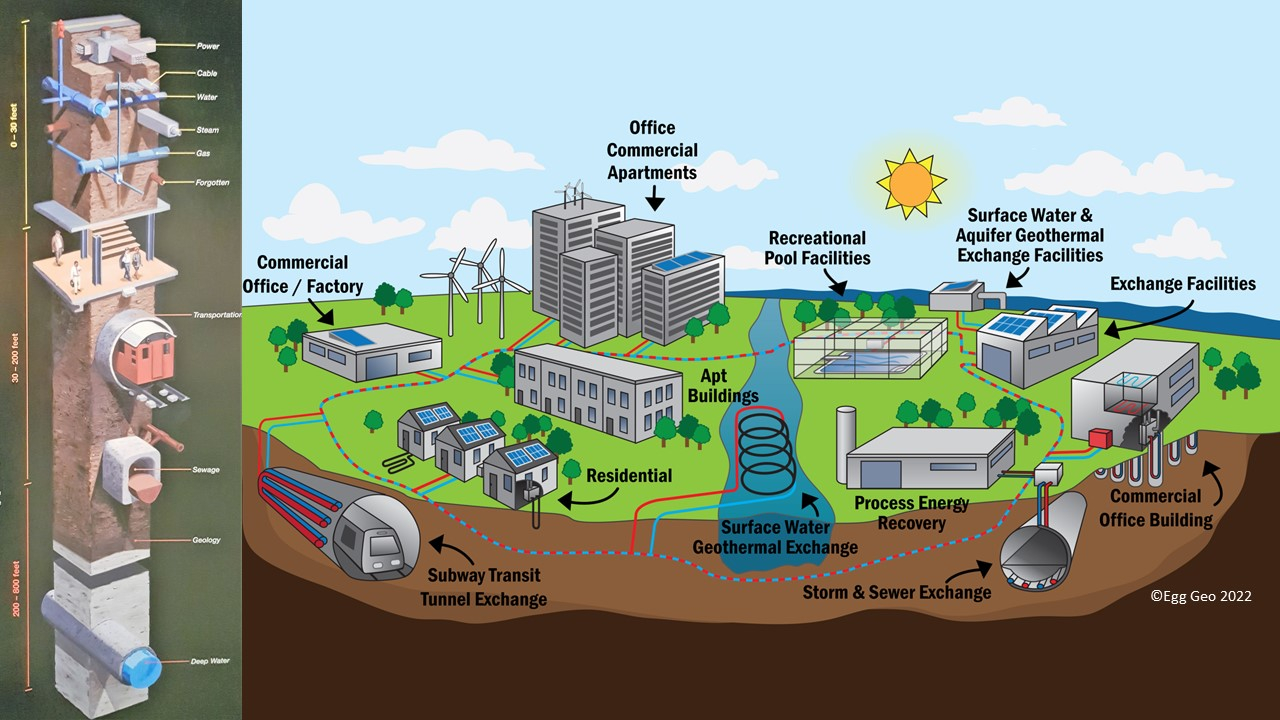 In the interest of health and safety, we have legislated that dangerous chemicals cannot be allowed inside buildings used for human occupation. Yet, millions of buildings have natural gas piped through the walls and between the floors into most rooms and offices.

Natural gas, while considered cleaner than other combustible fuels, is dangerous because the emissions into the home or business have the potential to ignite and cause fire and explosion hazards. It is even more dangerous when methane emissions displace oxygen.

Gas stoves also can release other potentially harmful materials, such as benzene and small particulate matter, according to reports noted in Fatherly magazine (https://bit.ly/3qGujiK). There have been numerous instances of gas explosions that destroyed homes and offices, even destroying street intersections, as happened in New York City’s East Village in 2015.

When considering all the different reasons to keep such dangerous chemicals out of buildings, is it any wonder that New York City banned natural gas in all new building construction and major renovations? According to the recent passage of local laws, all major remodels and new construction now ban natural gas in the city (https://nyti.ms/3tGw55j).

NYC’s Local Law 152 also mandates inspection of existing natural gas lines to ensure they are not leaking (https://on.nyc.gov/3fEXwEx). The underlying implication is that destructive inspections will make the inspection process so costly that building owners will elect to abandon the gas lines in place. 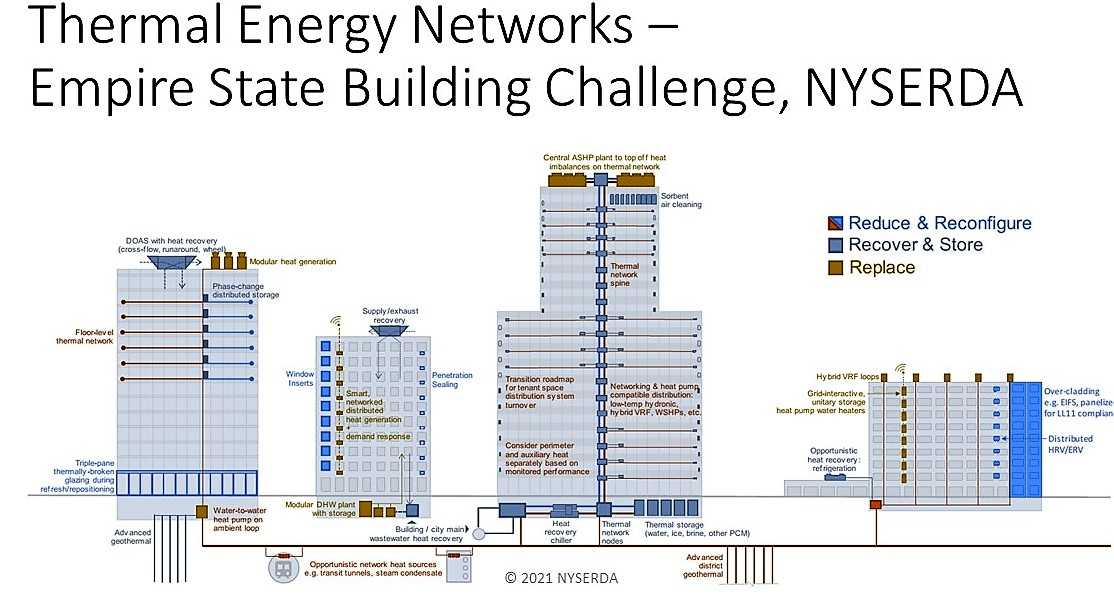 This effectively does what the legislators and clean air activists are looking forward to in the first place — freeing the city from the grip of fossil-fuel consumption and combustion, thus reducing greenhouse gas emissions and dangerous chemicals in their buildings.

The Home Energy Efficiency Team in Massachusetts has made incredible strides toward the replacement of natural gas networks through communities with thermal energy networks. In the PHCP Pros column “The $9 Billion Question: Stranded Assets or Geo Micro Districts” (http://bit.ly/GeoMicroDistrict), we shared some of the incredible progress made as of early 2020.

Since then, the Massachusetts Department of Public Utilities approved all four National Grid demonstration projects, called geo blocks, for which the utility applied. The natural gas utility is not only upgrading the natural gas pipelines to hydronically based thermal energy networks, but they are also replacing all the gas at appliances inside the homes as part of the project.

More than half of the nation's 2.5 million miles of natural gas pipelines are at least 50 years old (https://bit.ly/3nDdVO8). With an expected life span of under 60 years, now is the time to upgrade these pipelines, following the example of National Grid.

Natural gas and electric companies all over the country, and indeed the world, are moving toward this model of replacing combustion fuel lines with thermal energy networks.

This is a brilliant solution to an infrastructure challenge; it addresses 40 percent of our energy budget (heating, cooling, hot water) by providing solutions that balance the peak load to the electric grid between summer and winter. This solution eliminates combustion heating from our communities, which solves part of our greenhouse gas emissions goals and balances the electrical peak demand year-round.

Healthier communities that stopped burning fossil fuels and no longer emit greenhouse gases are a result of this brilliant infrastructure solution. With one infrastructure upgrade, we can eliminate greenhouse gas emissions from buildings, electrify them, and improve the community and public health challenges facing our nation.

With this, our public health and safety are improved, and we will increase long-term jobs for skilled American labor in just about every trade.

More from this author
Kristy Egg