There’s no doubt to any of the hundreds of PHCPPros who attended the PHCCCONNECT2021, Oct. 20-22 in Kansas City, Missouri, that it was good to see all those hundreds of faces again as the plumbing and heating community gathered in person for the first time in two years for the PHCC’s annual meeting and trade show.

“We’ve all had to do our very best to stay in touch during the pandemic,” Hunter Botto told us during the opening reception of the trade show floor. “But plumbing and heating is a real people business so it’s great that we could all get together again and meet in person.”

While masks were still mandatory in Kansas City, there were still plenty of times when attendees felt safe enough to doff them while attending seminars, walking the trade show or attending after-hours show events.

In keeping with the national mood following a pandemic that essentially ended business as usual in early 2020, this year’s fitting theme for the meeting and trade show was “Stand Together. Work Together. Build Together.”

“That sense of community is really what this show is all about,” Botto added, who was wrapping up his time as the trade association’s president. 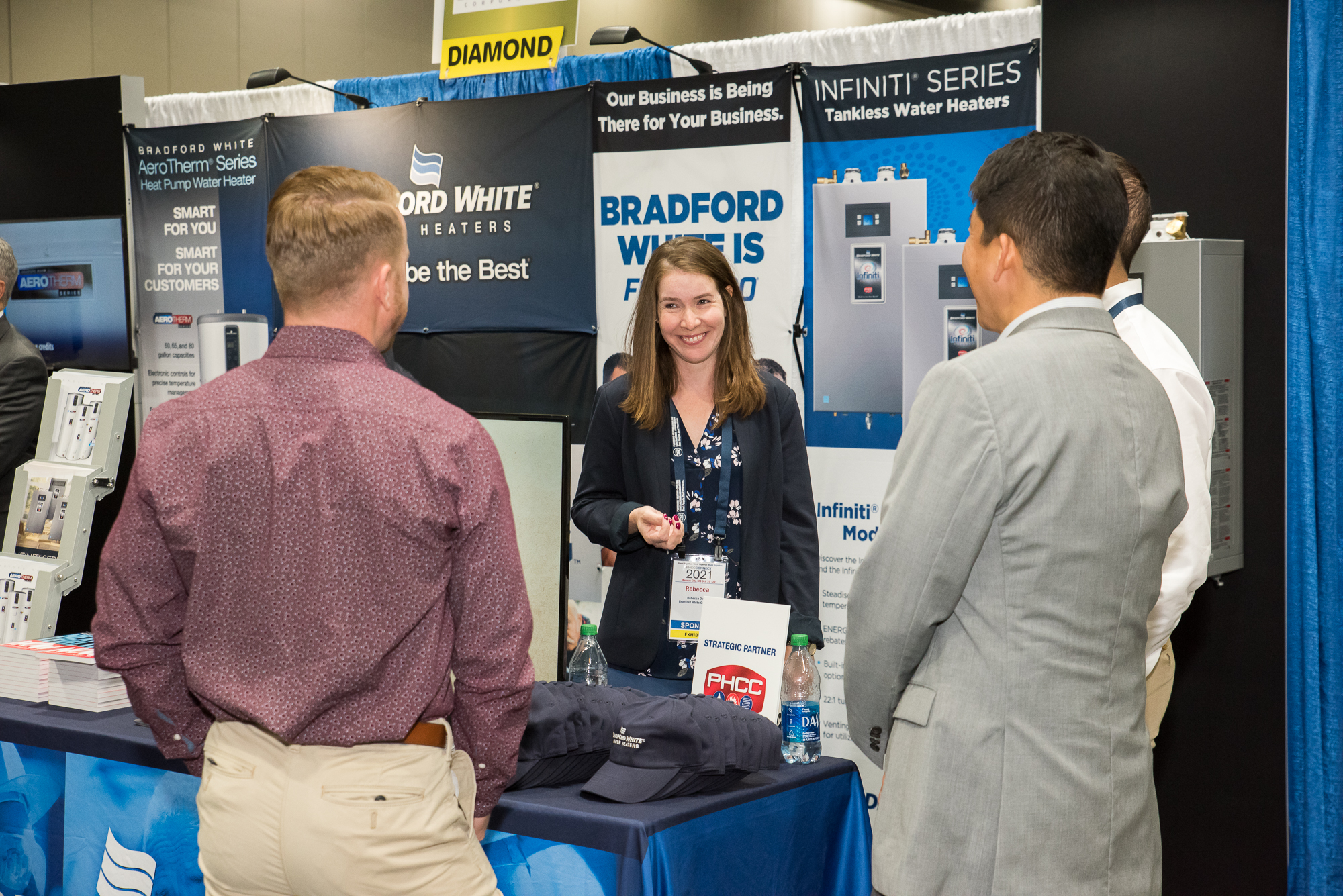 While PHCCCONNECT2021 officially kicks off for most attendees with an opening reception late in the afternoon on Oct. 20, early bird registrants were able to tour Sioux Chief’s 660,000-square-foot headquarters on Oct. 19 (check out the video here: bit.ly/3bDqpix) followed a day later by a full day of 15 seminars.

While we couldn’t attend every concurrent session, our PHC columnists, Heather Ripley and Ellen Rohr, were at the front of their rooms talking about, respectively, public relations and employee retention.

One other big highlight of the day was the launch of PHCC’s new Finance Boot Camp. The trade group partnered with well-known business consultant Ruth King, who presented the first two modules – “Understanding a Profit and Loss Statement” and “Understanding a Balance Sheet” – of PHCC’s nine-module program. The association plans to have the complete program available to PHCC members soon.

QSC also held two education seminars on today’s workforce and co-op programs and, at the day’s end, kicked off CONNECT for its members with an axe-throwing event sponsored by Rheem. (Later, the group also had a Community Corner sponsored by A.O. Smith and also held a reception sponsored by Bradford White.)

Of course, the show also featured the Product & Technology Showcase, which included more than 110 exhibitors and sponsors. And, as always, the Plumbing and HVAC Apprentice Contest, including 16 plumbing and seven HVAC apprentices from around the country, was held adjacent to the trade show. The apprentices were all put their paces over the course of two days as they competed for top honors (more on the official results below). 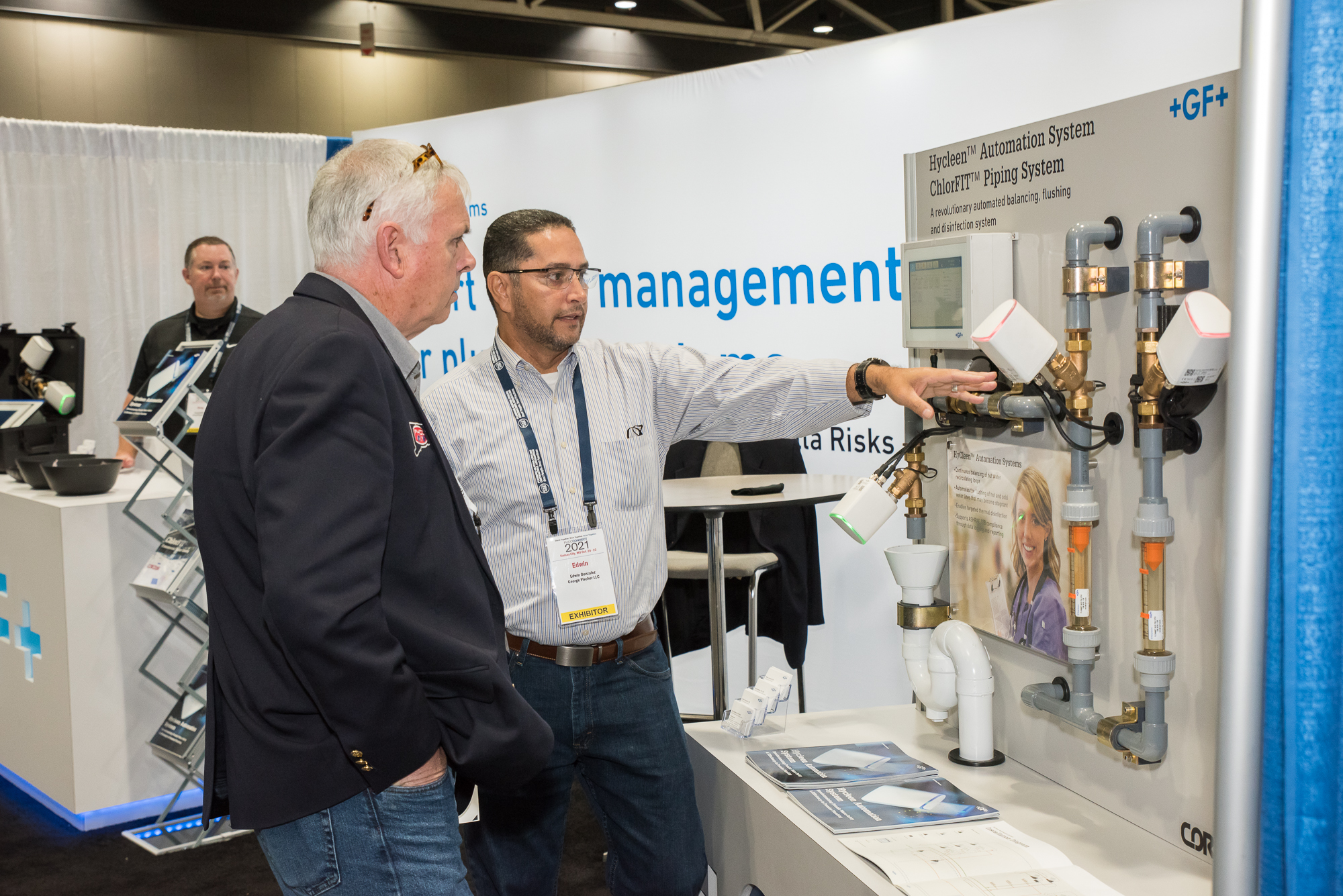 One event attendees always look forward to is the Awards Luncheon, Oct. 22, sponsored by InSinkErator. Here’s a rundown of some of the award-winners:

“A large portion of his career has been dedicated to supporting the trades and continuing education,” Botto said during the award presentation. “In doing so, he has brought great honor upon himself, his family, his company, his local, state and National PHCC Associations, his local community and our beloved industry.”

The Scott Award, names after the PHCC’s first president, acknowledges a PHCC member who has provided years of service and unselfish devotion to the association and to the industry.

After launching Raven Mechanical with his wife Patty, Bill continued to be instrumental in industry education through his involvement in trade associations. He revitalized the plumbing apprentice program for the Associated Building Contractors, and he joined the Associated General Contractors, where he was one of the first associate members elected to its Board of Directors.

After joining PHCC in 1988, he has served in several leadership positions at the local and state levels in Texas, developing numerous education programs including a contractor boot camp, Journeyman Prep class and the Medical Gas class for PHCC of Texas

In addition, Jones was one of the founding members of the Construction Contractors’ Alliance, and has been a prominent leader for the PHCC Educational Foundation, serving as chairman of the Foundation and chairman of its Investment Committee and continuing to support its education and scholarship programs as a member of the Board of Governors.

The extra support for PHCC from Patty, who passed away in 2019, lives on through the national Patty Jones Memorial Scholarship, which Bill established.

James says he’s been a plumber for 74 of his 91 years. Among other achievements, Lindsey Brothers launched a community program – “Handle the Business” – which introduces 15- to 20-year-olds to career opportunities who don’t require a college education. The program is credited with getting an under-served demographic gainfully employed in the trades.

Striving to make a positive difference in its community and in the lives of its customers, Lindsey Brothers also has supported other local organizations, including Virginia Beach CASA, the NAACP, Norfolk State University, WPCE’s “Let’s Make it Difficult for Children to Fail,” and a variety of neighborhood youth groups.

In 2016, the Virginia Beach Department of Economic Development recognized Lindsey Brothers – then celebrating its 50th anniversary – as one of the oldest African-American plumbing and heating companies in the United States

Meanwhile, Paul was described as “the consummate professional, industry advocate and association supporter. “In 1948, Ongaro & Sons became one of the original members of PHCC of California’s Redwood Empire Chapter.

For more than 20 years, Paul himself has served in various leadership positions within the PHCC chapter, including four terms as president. He developed curriculum and taught plumbing, HVAC and hydronics classes, and from 2015 through 2019 taught a 25-week Plumbing Code Course, which is the financial backbone of the chapter.

According to PHCC representatives, William “epitomizes the skills and attitude celebrated through this award,” which recognizes excellence in the HVACR industry and is awarded to the contractor who best represents the ideals of the profession.

As testament to those principles, William has stayed at the forefront of green building processes, working closely with general contractors, owners and LEED professionals to help create buildings that will meet the highest standards of sustainability. For more than 70 years, his company has been delivering quality commercial plumbing and HVAC services, ranging from custom fabrication to LEED-certified projects to the latest geothermal applications.

Safety is another priority for Mock. His company’s Safety Incentive Program includes mandatory employee attendance at safety meetings, drug testing, daily job reports, training on the proper use of power tools and construction materials, and a strictly enforced policy that refrigerants and other hazardous materials are handled only by personnel trained and certified in proper usage and disposal.

In addition to running his business, Bertolino Plumbing & Heating, Virginia Beach, Virginia, with his brother, Anthony teaches all four years of plumbing apprenticeship classes at Norfolk Technical Center. He has dramatically improved both the retention rate for each class and the number of students, and his program is one of the largest in Virginia.

As an instructor, Anthony’s effectiveness is more than charisma and straight talk, however. He incorporates the Montessori method of education that is based on self-directed activity, hands-on learning, and collaborative play. He engages students by sharing examples of his own on-the-job challenges and encourages them to discuss their work experiences to help advance the entire class.

“Tony’s students know that he expects them to apply their classroom knowledge to the day-to-day work and that licensure is the mark of professionalism,” Botto added during the award presentation. “He reminds them of the importance of plumbing to the health and safety of the nation.”

Jim has nearly 50 years of experience in the HVAC profession, including 15 years as a self-employed contractor, and a dedication to the future of that industry as director and owner of Granite State Trade School, Raymond, New Hampshire.

He also serves as official mentor and proctor for the PHCC Educational Foundation’s online Plumbing and HVAC curriculum programs approved by the state of New Hampshire. 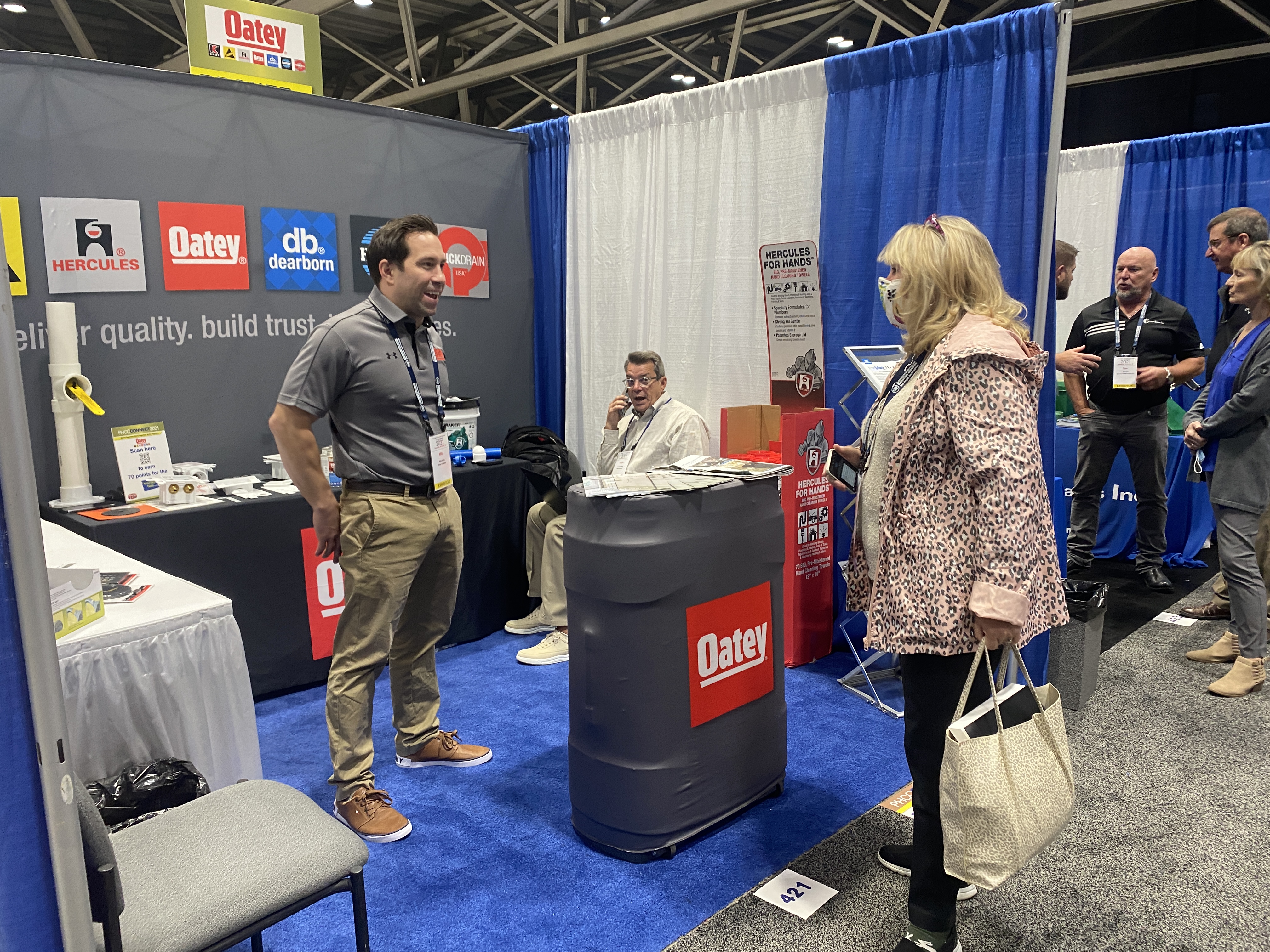 An independent mechanical inspector and consultant, Fusco developed the first gas training instruction program for Granite State Trade School. Since its inception in 2006, the school has expanded to provide expert training for gas, oil, HVAC and plumbing professionals, including a full four-year plumbing apprentice program.

To make his students experience reflective of real work experience, Fusco has built many hands-on features to the school’s equipment and has designed innovative training devices for students to work with, including electric circuits, diagnose control failures, venting and draft simulators.

“He has the uncanny ability to appropriately combine the ‘book knowledge’ needed with ‘in-the-field knowledge’ necessary to equip students with the skills needed to succeed as HVAC professionals,” Botto added during the awards presentation.

Many other awards were handed to members and chapters during the luncheons as well as other events throughout PHCCCONNECT2021. For a complete list go here: bit.ly/3mQU91P.

The luncheon also recognized the hard work put on display by the next generation of skilled trades men and women during the apprentice contest.

The HVAC competitors were required to complete a written test, demonstrate proper brazing techniques and perform a hands-on diagnostic on an HVAC package unit, with system errors created by the PHCC Education Foundation’s contractor volunteers for the competition. The competitors also had to perform a pressure and leak test, demonstrate proper refrigerant recovery procedures and the ability to accurately take a variety of instrument readings.

The plumbing apprentices were required rough-in a bathroom system. The set-up includes a toilet, sink and shower, complete with supply, waste and vent lines, plus cleanouts and extra features designed to test the contestants’ knowledge and skills. The test set-up includes a variety of pipe materials – cast iron, copper, PVC and PEX, and corresponding joining methods.

A dedicated team of contractor volunteers arrived two days before the competitions to assemble the competitor test benches, distribute the materials and supplies and setup the testing areas. They monitor the competitions, evaluate the apprentices’ work and provide constructive feedback on each competitor’s performance following the event. 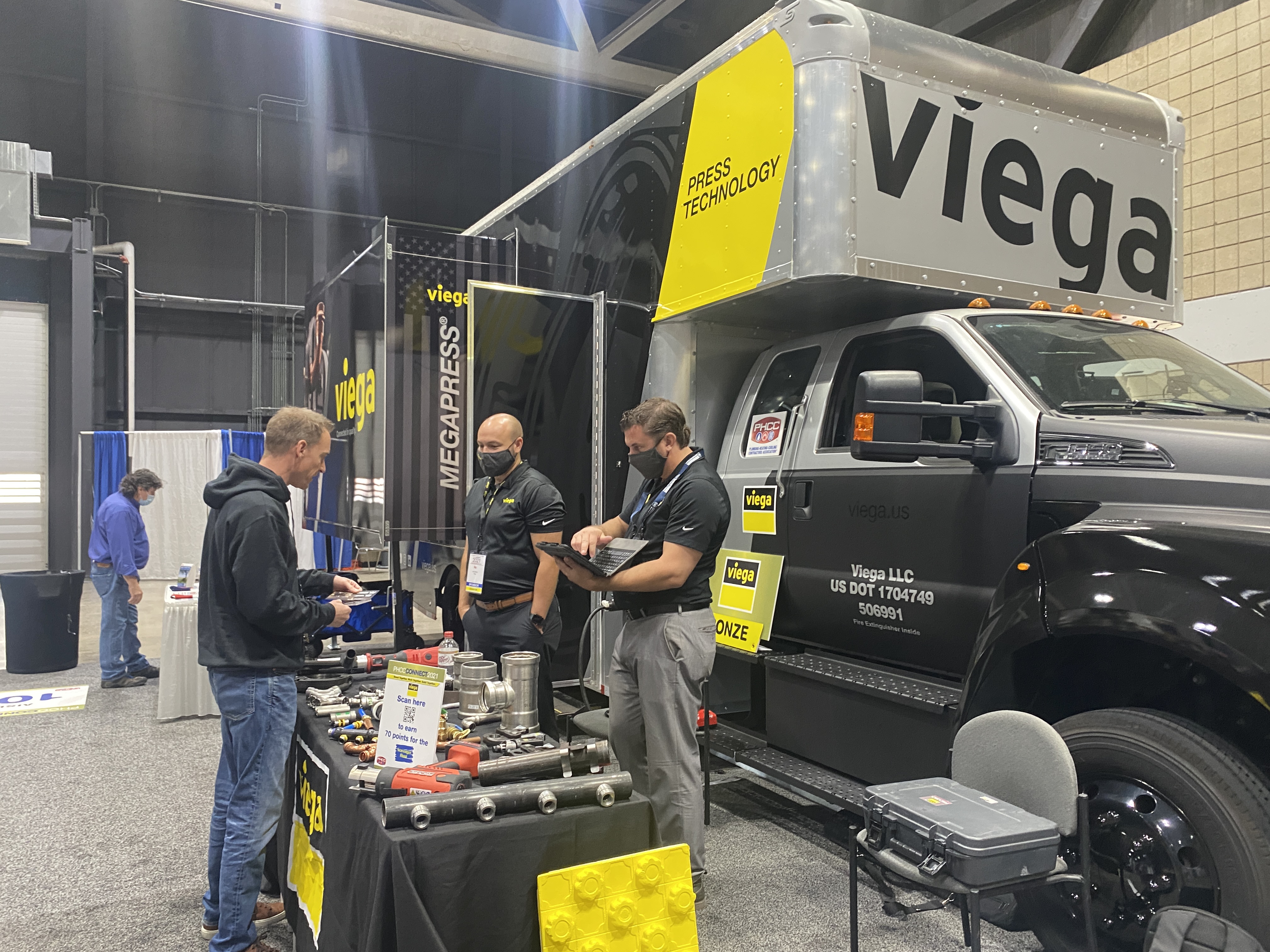 Milwaukee Tool made a major contribution to the Apprentice Contests again this year by donating most of the tools needed by the contestants for the competition. This gift allowed the competitors to skip the trouble of shipping their own tools and to go home with a new set of tools to power their work long after the competition ends.

On a related note, the PHCC Educational Foundation and the PHCC National Auxiliary announced scholarship awards totaling $189,815 this year to a total of 73 students and apprentices. In addition, the Foundation announced that it raised more than $230,000 through its Invest in Your Future Campaign.

The Foundation also announced it raised more than $230,000 through its Invest in Your Future Campaign. Thanks to matching funds from InSinkErator, Ferguson, Moen and NIBCO, plus A. O. Smith, Bradford White, Federated Insurance, the International Code Council, Milwaukee Tool, Rheem, Scorpion Home Services and Viega, the Foundation far surpassed its $185,000 goal for this year’s campaign.

In other news, PHCC members and staff celebrated the dedication and service of CEO Michael Copp who officially retires this month. Ready to lead the charge is new PHCC CEO Mark Ingrao, who officially assumed duties at PHCCCONNECT2021.

And, finally, just few other highlights:

Jim and Sandy Stack joined the PHCC Educational Foundation Board of Governors.