Hyperscale Data Centers Can Save Water and Energy

A better way to cool data processors is through fluid immersion cooling.

Headlines are filled with news about drastic increases in new device power, increasing both the size and heat rejection of data centers. I was recently invited to work on a “hyperscale” data center located a two-hour drive outside the nearest major city. I wondered why this location was chosen, nestled in the Wyoming Mountains at an elevation above 7,000 feet. My interest was piqued.

A hyperscale data center is a massive business-critical facility designed to support resilient and scalable data applications. These are often associated with big data-producing companies such as Microsoft, Google, Amazon and Facebook. They have redundancy in just about everything from the huge electrical services to the mammoth cooling systems.

In Phoenix, the city gave pushback to a Facebook data center that was reported to consume 1.25 million gallons of water per day for cooling tower operations. At a time when water resources are strained to the breaking point, this has become a stop-gap for communities such as Phoenix in the southwestern United States, as well as around the world (https://bit.ly/DataCenterHyperscaleH20).

Data centers may be cooled down using any combination of HVAC arrangements that should be familiar to most. These include computer room air conditioners, central chiller energy plants that reject heat through dry coolers, adiabatic coolers or cooling towers.

Cooling tower-coupled cooling systems are generally favored because they can improve the power use effectiveness (PUE) of the data center. That’s because the efficiency of air-cooled equipment can be increased dramatically by evaporative cooling, which drives down the effective heat transfer temperature from outside dry-bulb to the more favorable wet-bulb temperature. Depending on the relative humidity, this can improve cooling PUE substantially.

The use of evaporative cooling towers consumes high volumes of fresh water, diminishing the water use effectiveness (WUE) to 1.8 liters/kWh. This is responsible for the growing fresh water consumption that is stressing the record low reserves of fresh water around the world.

Data centers consume water across two main categories: indirectly through electricity generation (traditionally thermoelectric power) and directly through cooling. In 2014, a total of 626 billion liters of water use was attributable to U.S. data centers. These facilities compete with other users for access to local resources. A medium-sized data center (15 MW) uses as much water as three average-sized hospitals or more than two 18-hole golf courses (go.nature.com/2WU0dfs).

Most data centers use a strategy for cooling that involves raised floor supply-air plenums using forced air for cooling. With forced-air cooling, the evaporator in the refrigeration units needs to be about 40 F to create the 55 F to 60 F air that must be pumped through the processors to provide the cooling needed to keep them online.

On our Kid’s Corner web page (https://bit.ly/FunWithGeoHeatPumps), we share the concepts of convective and conductive heat transfer using the down-to-earth analogy of water bottles in an ice chest versus a freezer. This illustrates how much faster heat is transferred through immersion or conductive thermal transfer; water conducts heat 25 times faster than air (https://bit.ly/3APPwJT). 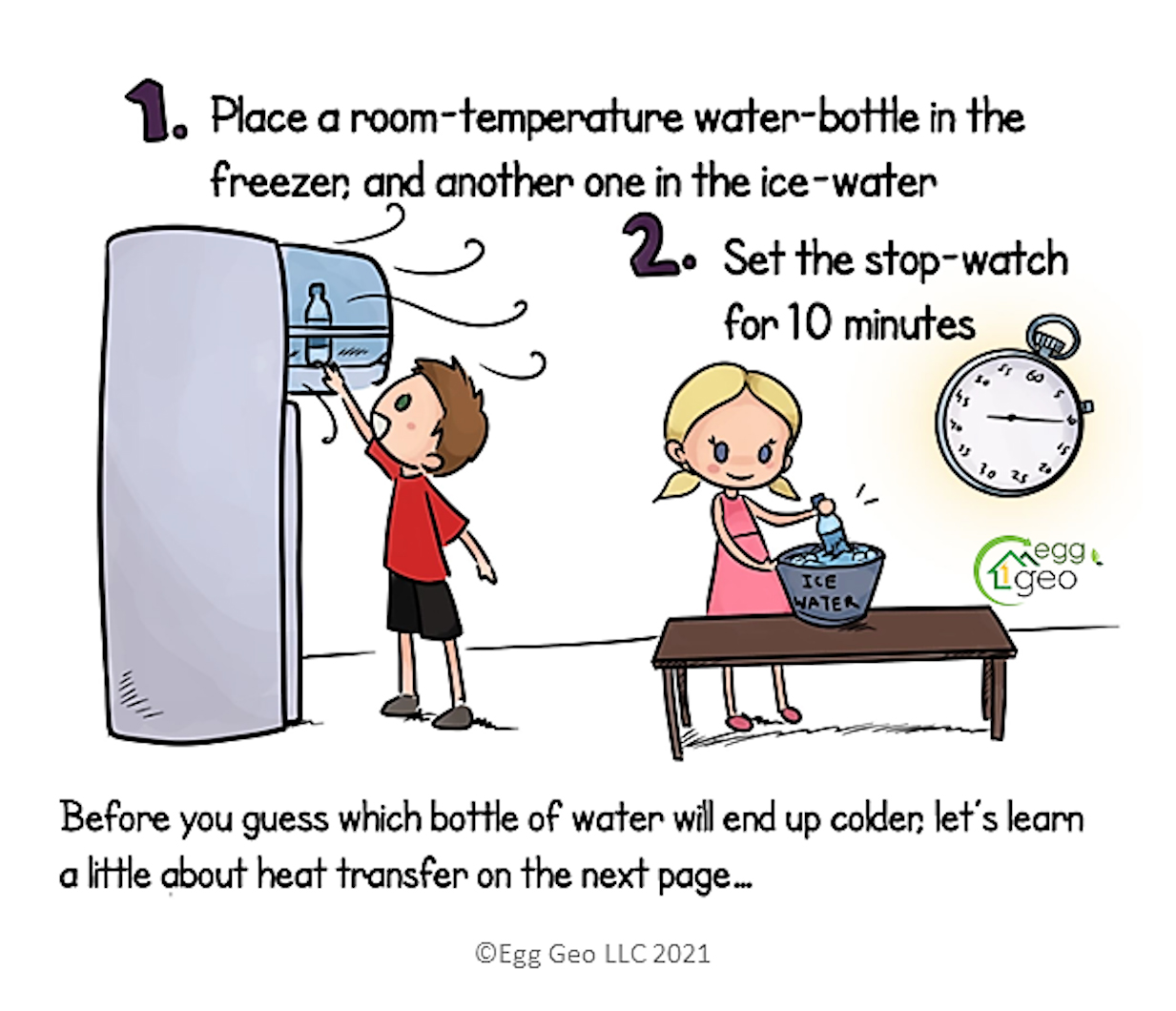 The point is that there is a better way to cool these processors: fluid immersion cooling. Modules that look a lot like chest freezers, filled with a nonconductive fluid, take up far less space and use about 10 percent of the energy of active forced-air cooling.

The reason for the reduction in energy is interesting. Since heat transfer by conduction is so much more efficient, the same cooling energy transfer can be accomplished at 90 F fluid with the immersion cooling process, rejecting 107 F fluid, which is then run through dry coolers or other heat sinks.

Obviously, these temperatures can be accomplished without active refrigeration, eliminating the energy draw of a refrigeration cycle from the process. This also eliminates chemical refrigerant-related problems and all the expense of chiller and computer room air conditioning first costs, repairs and maintenance.

Still, reducing energy consumption does not reduce the need to get rid of the heat. Evaporative cooling to reject waste heat is critically important. The challenge is to pump the heat to where it is needed. If the heat can be absorbed by or rejected to another process, then cooling towers are not needed, either for part of the time or full-time, depending on how well the load is matched.

Data centers are prone to be built in or near city centers. Though we have seen great concepts to reject heat to residential apartments and buildings needing space and water heating, much of this has yet to be executed in practice. Project administrators are still working on how to cross property boundaries to make this happen in urban settings.

In the case of Wyoming Hyperscale White Box, a massive data center being developed in the mountains of Wyoming, they have been able to provide the answers to questions facing data centers for some time. It is set far outside of a populated area, high in the mountains, where the annual median temperature is about 55 F. This temperature provides a much better environment for rejecting heat from a data center efficiently.

The Wyoming Hyperscale Data Center is starting out with about 30 MW of capacity and growing to approximately 120 MW — that much heat rejection is the equivalent of 40,000 tons of cooling capacity. Since the data center is located in a remote area, what can be done with all that heat? That's the brilliant part. They are co-developing a project called Wyoming Hyperscale Indoor Farms (https://bit.ly/3md3JdU).

One of the most important aspects of their sister company's project is the focus on the implementation of cutting-edge technology to make it as efficient as possible, with the smallest energy footprint and environmental impact. Changing the relationship of computer operations with the environment, they formed a maternal bond with the earth and extended the sustainable ecosystem to food production.

Typically, Wyoming’s natural regional climate makes large-scale produce growing impossible. Without technology, that is. The growing season is too short.

So, they’ve decided to apply adaptive farming methods and extend the growing season by purchasing waste-heat therms captured next door by the liquid-cooled, hyperscale data center. Off-take valves for additional secondary heat use (snowmelt, recycling, etc.) are a critical aspect of the design.

Wyoming Hyperscale Data Center is a data center consuming no (cooling) water and uses about 10 percent of the cooling energy of a similar-sized, forced-air data center. It also enables local year-round farming. This is a very big deal for mechanical professionals.