Free Subscription
Home » Cities Are for People
The Future is Now

Cities Are for People

One statistic frequently quoted is that about 40 percent of our unhealthy global greenhouse gas emissions come from buildings, including industrial structures. More recently, some of the northern municipalities in America, such as in New York, have reminded the construction industry that the figure rises to about 75 percent inside city limits. To meet the climate crisis head-on, these cities are becoming aggressive when it comes to building projects.

Before the COVID-19 pandemic, municipalities were already getting tough on new construction and vehicle emissions. During the pandemic, they took advantage of the quiet streets, creating more bike lanes, pedestrian malls and electric vehicle charging stations, as well as electrifying city fleet vehicles and buses.

Brookline, Mass., Seattle and 42 cities and counties in California also announced gas phaseouts. Some established earlier deadlines, some apply only to new construction, but the trend is clear.

Proposed gas connection bans are being challenged, which has mitigated the movement in some states. In a few regions, cities are taking an incentive approach rather than explicitly banning gas. For example, Sunnyvale, Calif., offers a density bonus to developers eliminating gas from projects. Others offer expedited approvals and special exemptions.

In Seattle, Vancouver and elsewhere, councils have been busy eliminating or easing the requirements for minimum parking spaces for new buildings. With 27 percent of renters not owning cars, Seattle decided that it’s unfair to the people to plan a city where parking is abundant and free while housing is scarce and expensive. Tenants are no longer required to pay for spaces they don’t use, and developers don’t need to include parking in affordable housing projects or projects near transit stations.

A freak cold snap hit Texas towns and cities in February, with temperatures dropping below freezing for nearly 10 days. It caused power systems to fail, leaving people without heat in their homes. More than 200 died from hypothermia or carbon monoxide fumes when they tried to heat their homes with gas stoves or vehicle heaters in enclosed garages. Some died from failing electrical medical equipment.

“Many houses had outdoor water tanks that froze and burst,” says architect Trey Farmer. “Some people had their water heaters inside and they still froze and burst. We were lucky that we completed a renovation; our water heater was in an insulated attic. It didn’t freeze and the water was still hot for two days.”

Although the modern design meant their house in downtown Austin was more resilient than most, his son, Heron, is just two years old. The Farmer family was invited to a friend’s place, but they left after a couple of days of cooking breakfast on a camp stove in the backyard.

Preparing to become parents led to the renovation, planned by Trey and his interior designer wife, Adrienne. “The old floors were full of slivers, no subfloors; it was very drafty, 16 air changes per hour,” he explains.

The couple knew about building science and low-cost cooling and dehumidifying, so they opted for a passive house with rooftop solar. When they began gutting and expanding the old place and found termite damage, it made sense to use new 2x6 struts, which worked well with super-insulation.

“After we left during the cold snap, I was able to keep monitoring the temperatures inside our house because the air quality monitor was battery-powered, and it linked to my phone with Wi-Fi,” notes Trey Farmer.

The Farmers’ passive house was set at 68 F, but after the first day of the power outage, the temperature inside dropped to 62 F. It was 9 F outside and 36 F inside their next-door neighbor’s house. On the second night, it was 53 F inside the passive house; on the third day, it was 49 F. Then the power was restored and the heating system came back on.

As with all passive houses, the HVAC system is designed for very low loads, despite providing conditioning for 2,100 square feet. It consists of a Mitsubishi mini-split, a Panasonic energy recovery ventilator with a MERV-16 filter box on the front end, some bathroom fans and an Ultra Aire 70H dehumidifier. Trey Farmer explains that dedicated dehumidification is critical in Austin’s humid climate and long shoulder seasons.

The whole system, plus the Rheem heat pump water heater, induction cooktop, kitchen appliances, plug loads and an electric car charger, are more than covered by 6.5 kilowatts of solar photovoltaics on the roof. “If we had installed a home battery, we could have kept the whole house running through the entire outage,” he says.

The Farmers are considering installing some batteries, although they may not yet go for the still relatively costly Tesla Powerwall, which he says is pretty much sold out in Texas as I write this, a couple of months after the ice storms.

New York is abuzz with renovation plans as the state and New York City continue to create rules to help them reduce their carbon footprints and create a healthier quality of life for urbanites.

A four-story townhouse in Gramercy started as a cosmetic rehab but suddenly turned into a 40 percent larger, five-story, two-family building. Although the decarbonization regulations had not yet arrived for retrofits to structures of this size, many predicted they were coming. Architect In Cho says that once the project included significant structural changes, it wasn’t a great leap logically or cost-wise to recommend a modern envelope and a fully electrified approach. 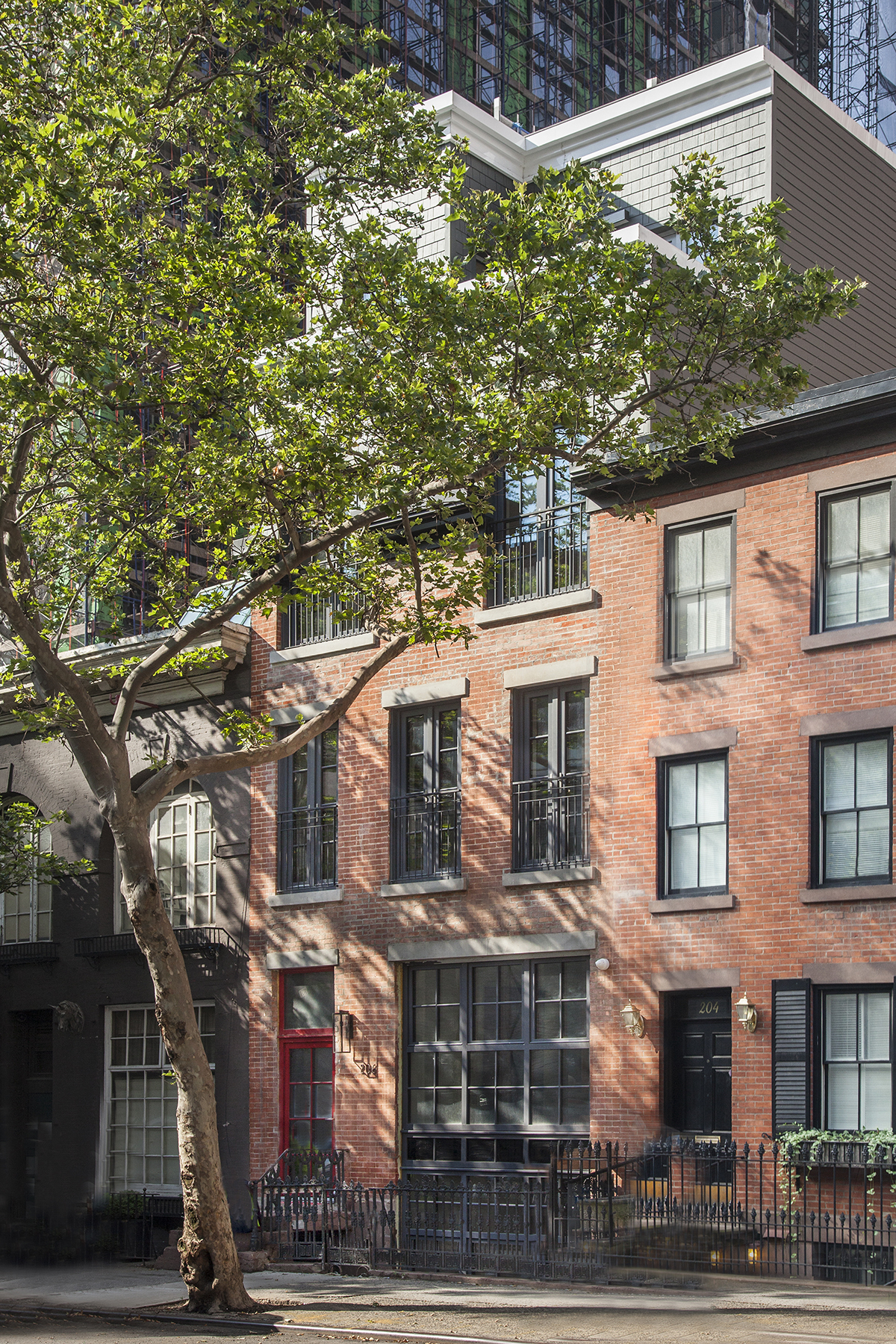 “Before the renovation, the building was dark with low ceilings and spaces closed off from each other,” says Cho. “It had structural deficiencies and stale air. The clients, on the other hand, are great lovers of openness, sunlight, natural elements, peaceful, comfortable environments and fresh air. So there were challenges with this design, but the clients were open-minded. And that makes all the difference.”

“Even though the idea with passive house is small and simple mechanicals, with retrofits, there is usually no such thing as simple,” notes Cramer Silkworth of Baukraft Engineering, who designed the mechanical system. “Especially in New York, where the buildings are tight little boxes and every square inch matters. You can’t have too many drop ceilings to hide your systems, and there are always architectural integration challenges. So we needed to start early and do precise planning.”

He adds that the system is, indeed, simple. It includes some Mitsubishi mini-splits with slim ducts serving two floors, Zehnder energy recovery ventilators and a Sanden heat pump water heater.

The work scope included excavating and pouring new footings, building secondary walls within the party walls, adding a 5-foot extension in the rear, and adding a fifth floor. In addition to the thermal-bridging issues, tying together the old and new parts of the building presented air-sealing challenges.

“In the end, we got it done and it was incredibly gratifying because the client was very happy,” she says. “And what is the role of architecture if it is not in service to people?”

Along with banning or discouraging the use of gas, many cities are questioning zoning rules favoring cars over people or single-family homes over adequate housing. Density is becoming a formal goal for many urban planners.

The California cities of Sacramento, Berkeley and San Francisco have all legalized fourplexes to provide more housing and embrace density rather than car-dominated urban sprawl. Many municipalities also took the step of allowing more downtown laneway housing. Liberalizing laneway rules has been slow to advance in the past because of NIMBYism (not in my backyard) and due to fears about the cost and difficulty of providing water, sewage, electricity and other services to thousands of laneway sites.

A new laneway project at the University of Toronto checks many of the boxes on a modern urban planner’s list. It’s an urban infill project and a laneway project, using modern super-insulated prefabricated panels with triple-pane windows. It’s also a demonstration project that may become the model for 40 other similar downtown student family properties.

“The mechanical system consists of a conditioning energy recovery ventilator (CERV) from Build Equinox, a cold climate inline duct heater and an earth tube,” says Rob Blakeney, one of the early adopters in the Ontario electrification movement. Two dilapidated houses were replaced with a daycare playground and three new homes. One fronts on Huron Street at 2,100 square feet; two in the category of laneway houses are on the same site at 1,100 and 900 square feet.

Blakeney says the three homes will use just 30 percent as much energy as homes built to the existing building code. The Energy Use Intensity (EUI) will be 46 percent of what would be permitted under ASHRAE Standard 90.1, and they will use 51 percent less water.

A CERV uses a 1/3-ton air-source heat pump to transfer heat from one air stream to another. Both the condenser coil and evaporator coil are located indoors, boosting efficiency in some regions. The same vendor now makes the CERV2, following pandemic concerns about airborne pathogens. It can include an optional internal 18-watt broadband 250-260nm UV-C lamp, which destroys viruses and other microbes in the air as it circulates through the system.

Consumers can choose from the standard MERV 13 filter, MERV 13+Carbon optional or Colorfil VOC Absorbing filter. The unit incorporates carbon dioxide and volatile organic compound sensors that detect pollutants such as C02, methane, propane, butane and 19 high and medium-high VOCs, such as acetone and sodium hypochlorite.

It can adjust and optimize efficiency with its variable-speed compressor and fan control. It also can shut down motorized dampers connected to outdoor grilles, circulating only indoor air. In chilly Toronto, they added the CERV inline duct heater for backup in cold climates.

When one of the old houses was being demolished and the basement backfilled for the daycare playground, developers installed an earth tube at the foundation level to provide pre-warming or pre-cooling. It accounts for about 30 percent of energy savings.

California likes to be first with everything, so it’s not surprising that its cities passed some of the greenest requirements early. At least one of its urban dwellers years ago already graduated from wearing sustainability on her sleeve to trying to be unobtrusive about it. Cathy O’Neill says she loves that her house in Sonoma is extremely environment-friendly but doesn’t look like a “geeky architectural experiment.” 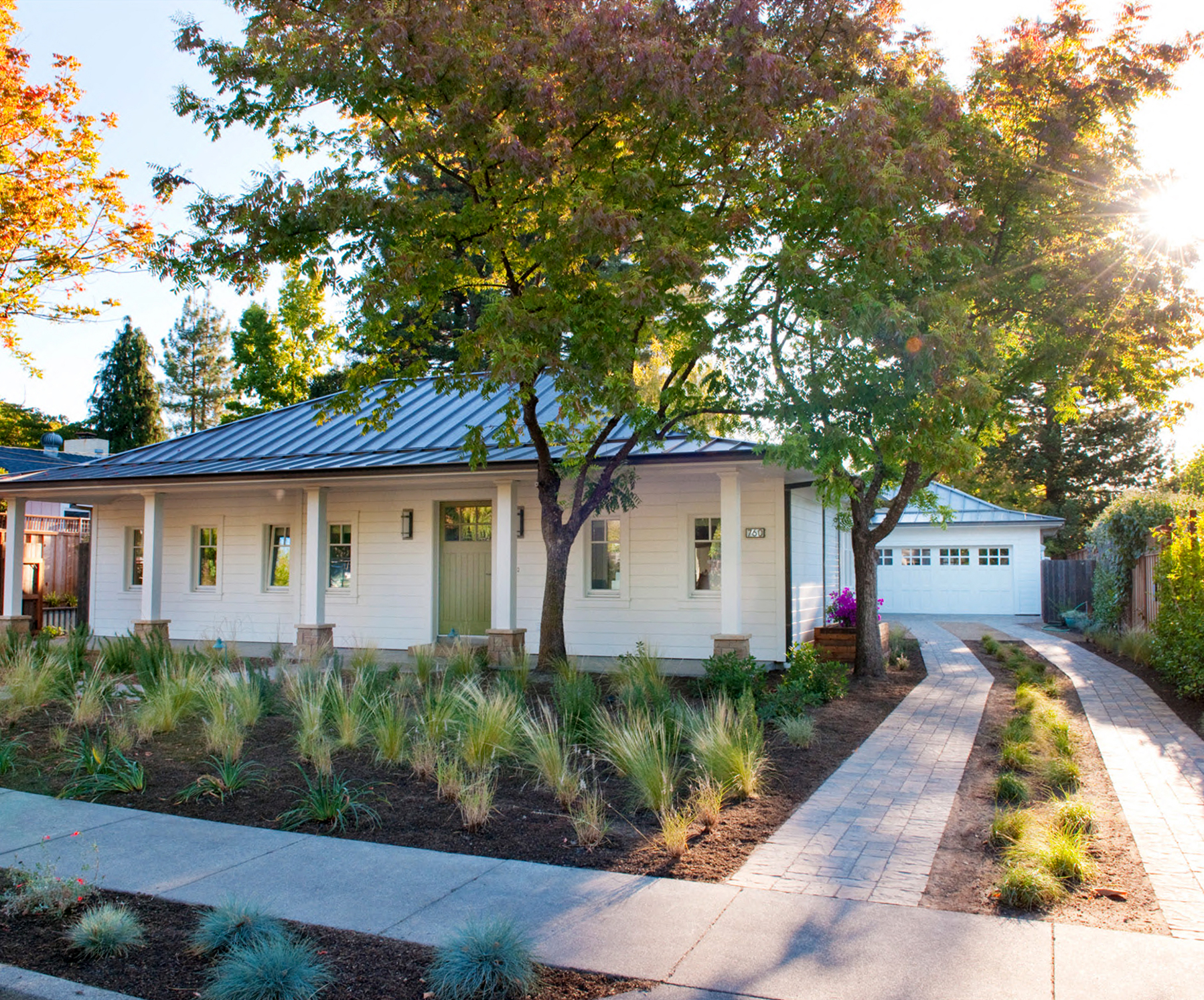 It’s in sunny Climate Zone 2 and highly insulated. It was completed nearly 10 years ago but its technology has stood the test of time, significantly reducing O’Neill’s greenhouse gas footprint and utility bills.

I have been an advocate of clean, operating solar thermal systems for years because of their extremely high coefficient of performance. However, I hear more and more that simpler technologies may soon make solar thermal obsolete.

That’s the way change happens, and change seems to be far-reaching now in North America. In Texas, New York, California, Ontario and all over the continent, urban planners are redesigning cities with cleaner, more efficient, healthier approaches — approaches that are better for people.