How a Century of Moments Built MRC Global

The PVF distributor looks back at 100 years of history while investing in technology and looking toward its future.

One hundred years ago, humanity was recovering from a global pandemic that is estimated to have infected one-third of the world’s population. In that time of uncertainty, Jerry McJunkin set out to build something that mattered. He opened McJunkin Supply Co. in Charleston, W. Va. on Feb. 15, 1921.

What began that day in the hills of West Virginia grew to be known as MRC Global, a prominent distributor of pipe, valves and fittings, and related products and services to the energy industry. Through approximately 230 service locations worldwide and 2,600 employees, MRC Global provides supply chain solutions and technical product expertise to customers globally across diversified end-markets, including the upstream production, midstream pipeline, gas utility and downstream and industrial.

The company manages a complex network of more than 200,000 SKUs and more than 10,000 suppliers, simplifying the supply chain for approximately 12,000 customers. The company is focus on technical products, value-added services, a global network of valve and engineering centers and a highly respected quality assurance program.

Whether it was the moment that Lew Ketchum decided to follow his pipe dream to form Red Man Pipe and Supply in 1977, or the first handshake in an entry-level job interview that led to a life-long career, MRC Global traces its success to the collection of individual moments that shaped the foundation that the company continues to build upon. 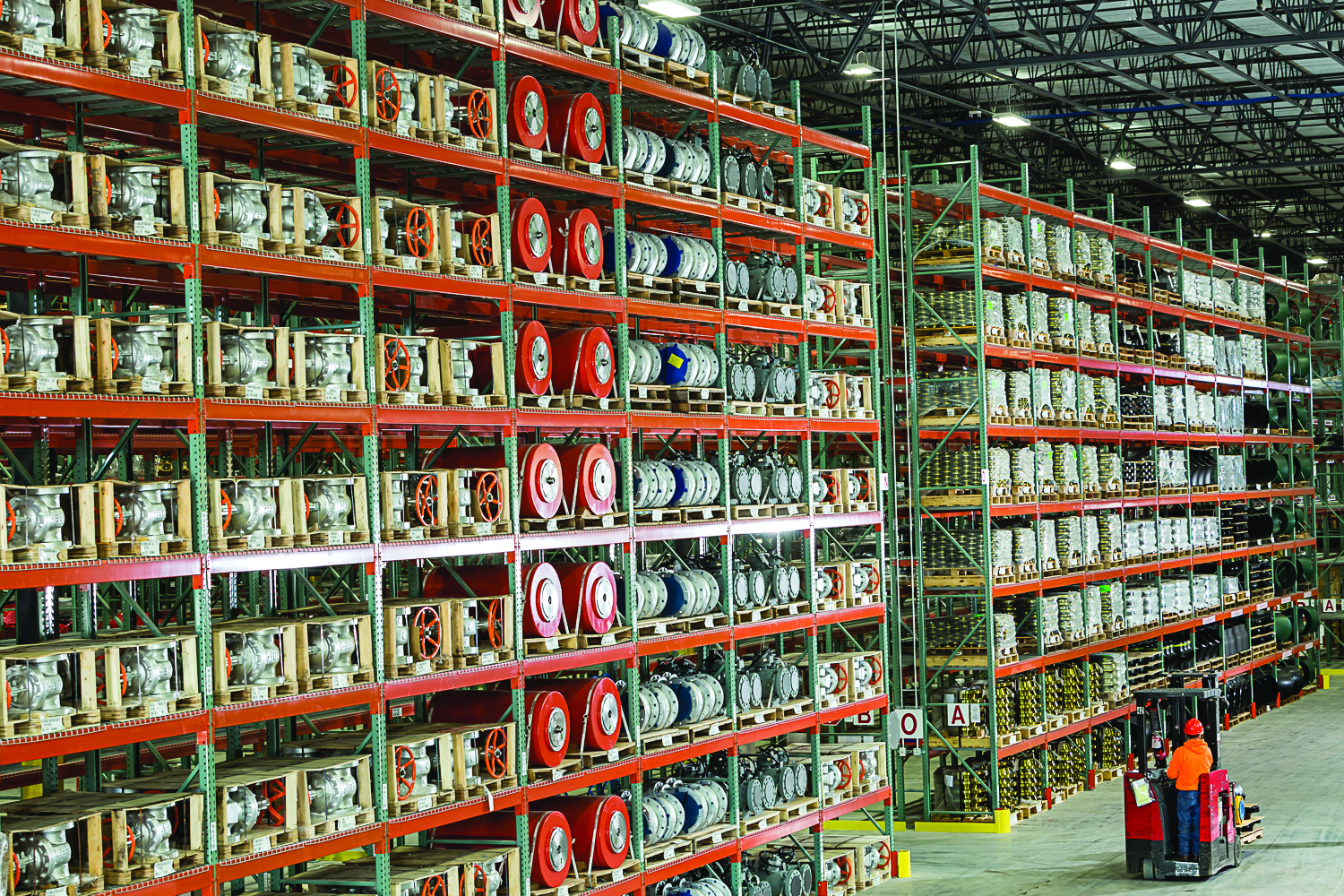 Moments that Built a Lasting Legacy

Tod Moss stepped off a plane in Dallas and immediately started sweating.

The 31-year-old branch manager from Salt Lake City was more accustomed to the mountain air than a Texas heatwave. However, it was the sudden summons to a meeting with all the other managers in his company that had his nerves on edge.

It was 1995, and Moss had been part of Vinson Supply since he was 21 years old. After working his way through the warehouse and inside sales at the Salt Lake City branch, Moss was now the leader of the location. As he found his seat in a large meeting room at a hotel in downtown Dallas, surrounded by 30 of his equally confused colleagues, he knew something big was happening

Then, Lew and Craig Ketchum walked to the front of the room and introduced themselves as the owners of Red Man Pipe & Supply and the new owners of Vinson Supply. Vinson was a premier distributor of pipe, valves, valve automation, and fittings and flanges to the petroleum and petrochemical industries. Its parent company, Sammons Enterprises, was a global conglomerate of more than 70 companies.

“It was like a minnow swallowing a whale,” Moss, who went directly from that meeting to an interview with his new bosses, says. “We were so much bigger than them and were in a very different business. Red Man was known as an oilfield supplier, but we had big contracts with big, industrial customers.”

Apparently, that minnow had an appetite.

Lew Ketchum’s long-term goal was to build Red Man into a company that could take customers “from a producing well all the way through the plant process.” In other words, a complete service offering. The addition of Vinson’s downstream capabilities accomplished that.

The late 1980s and 1990s were a period of transition for the entire PVF industry. Industry magazines were filled with news of consolidation among distributors. Acquisitions were no longer used purely as a means of survival — but for genuine growth.

U.S. drilling activity was on the rise following the rebalancing of oil and natural gas prices, especially when compared to the torturously low prices of the 1980s. While Red Man sought out opportunities in the downstream sector, in Charleston, McJunkin Supply began stretching into the upstream sector on both the East and West Coasts by adding Appalachian Pipe & Supply and Republic Supply to its growing footprint.

In the early 2000s, both McJunkin and Red Man continued to add locations, people and product lines to be more complete, single-source offerings for their customers. However, the energy industry was changing. Large, integrated oil companies wanted to consolidate their spend with a single, trusted provider across all three streams. And Red Man and McJunkin were not the only ones who noticed.

Private equity giant Goldman Sachs also recognized the trend and the opportunity. While McJunkin and Red Man each sought to fill that void for customers on their own, Goldman saw a unified path forward.

On Dec. 7, 2006, McJunkin announced that Goldman Sachs Capital Partners had made a “substantial” investment in the company. If that announcement sent waves through the industry, the July 2007 “merger of equals” between McJunkin and Red Man was a tsunami.

A Global Transformation to Support Customers

The newly formed McJunkin Red Man became the undisputed North American powerhouse. And the company’s new CEO, Andrew Lane, put a long-term strategy in place that would eventually lead the company to a place on the New York Stock Exchange.

A period of rapid-fire growth began with a bang — the addition of Transmark FCX. “We had a global supply chain and knew how to purchase globally, now we just needed the delivery arm to match,” Lane says. “Adding Transmark was pivotal. It was the first step to rebalance our revenue mix from commodity-driven products and toward value-add products.” 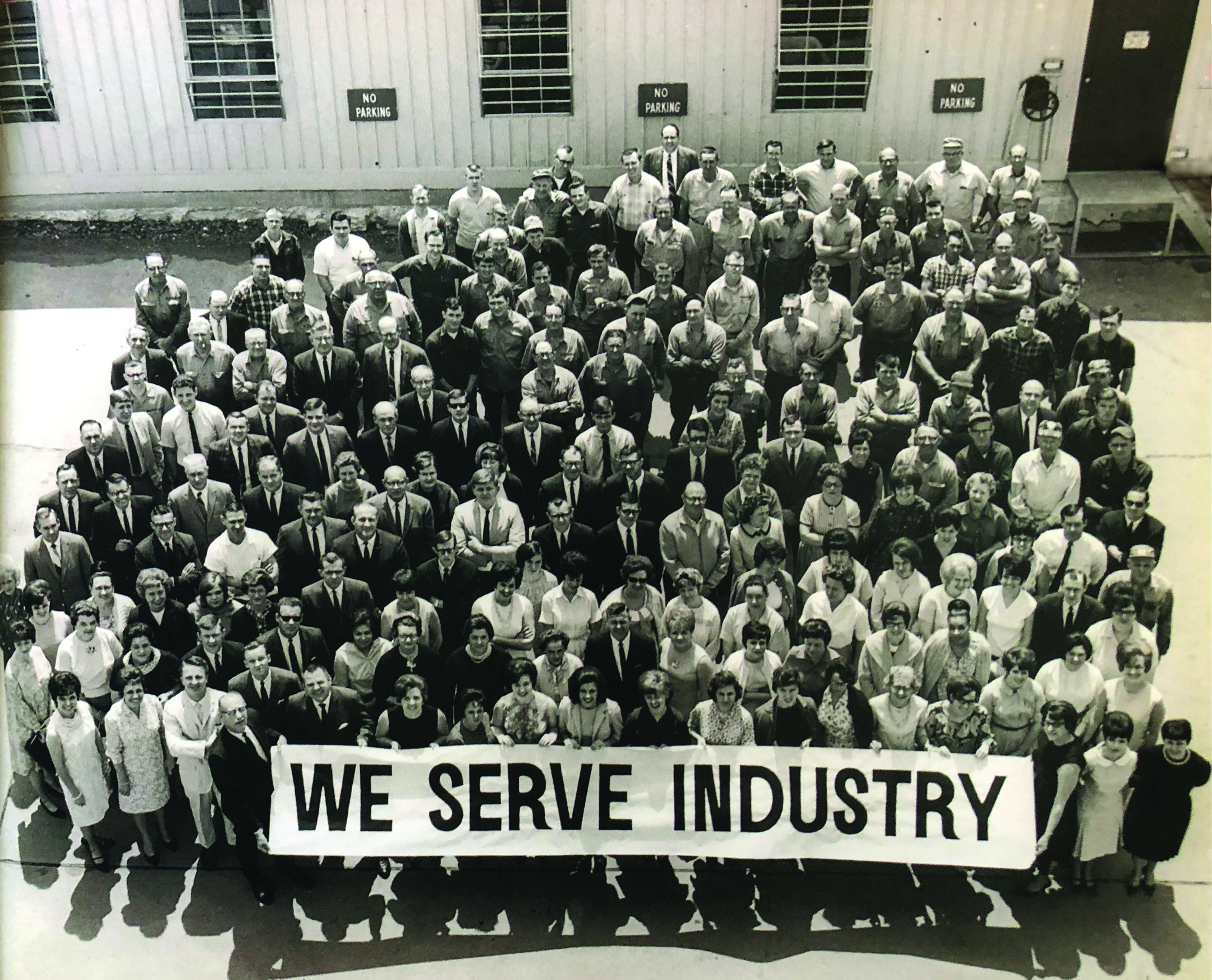 As the industry steadily recovered from the 2008-2009 financial crisis, McJunkin Red Man enjoyed a period of expansion. In the coming decade, companies from Australia to Singapore and Norway consistently added stainless-steel, high-alloy, valve, valve automation and specialty value-driven offerings for customers.

The specialized capabilities of MRC Global’s growing international operations, when added to the strong, long-term relationships in North America, ultimately resulted in global valve contracts with Shell (2012), and later Chevron (2017) and ExxonMobil (2017). MRC Global still holds all three global contracts. These landmark agreements are the cornerstone for the future of The House that Service Built.

MRC Global invested in branch and distribution center expansions or renovations. The company added strategic hub locations in North America and Rotterdam in Europe to allow for inventory flexibility.

In 2015-2016, oil prices sank rapidly. The result was a two-year downturn that gave seasoned energy professionals painful flashbacks to the 1980s.

“The energy business is cyclical,” Lane explains. “The cycles have gotten shorter and shorter and the downturns seem to come faster because of how interconnected our global economy has grown. We have had to learn how to manage the growth years but adapt to match our customers’ spending quickly. If you don’t respond in this new environment, you won’t make it.”

When business began to improve in the second half of the decade, the leadership team decided it was time to go on the offensive and strategically invest in long-term success instead of riding out the waves on a yearly basis.

“The shift in oil prices from $100 per barrel to $30 per barrel has fundamentally transformed our industry,” notes Grant Bates, MRC Global’s senior vice president of strategy, corporate development and e-commerce. “Any time an organization experiences such a dramatic change in end markets, it forces difficult leadership decisions in order to position the company for future success.”

Two milestone projects would emerge that would do just that. Both efforts would be described as game-changers, and serve as the baseline for the future of the global PVF distribution firm.

Accomplishing the first directive would prove to be a big challenge in every sense of the word — consolidating four significant locations into a single, massive regional distribution center.

On a Saturday afternoon in 2018, after months of working 12-hour days every weekend and 10- to 15-hour weekdays, Terry Boyles, vice president of Texas Gulf Coast, and Lisa Krebsbach, senior director of global operational processes, stood in front of 50 of their coworkers and told the team that they had officially completed the largest move in MRC Global history.

A task that had begun nearly a year before was now finished. Not only was the monumental feat completed, but it had been done with zero safety incidents, while the branch team continued to service customers.

“It was a beast,” Krebsbach, the director for the effort, says. However, she quickly pointed out that the process was much the same as the other 200-plus location openings, closings or moves her team has handled since 2011. 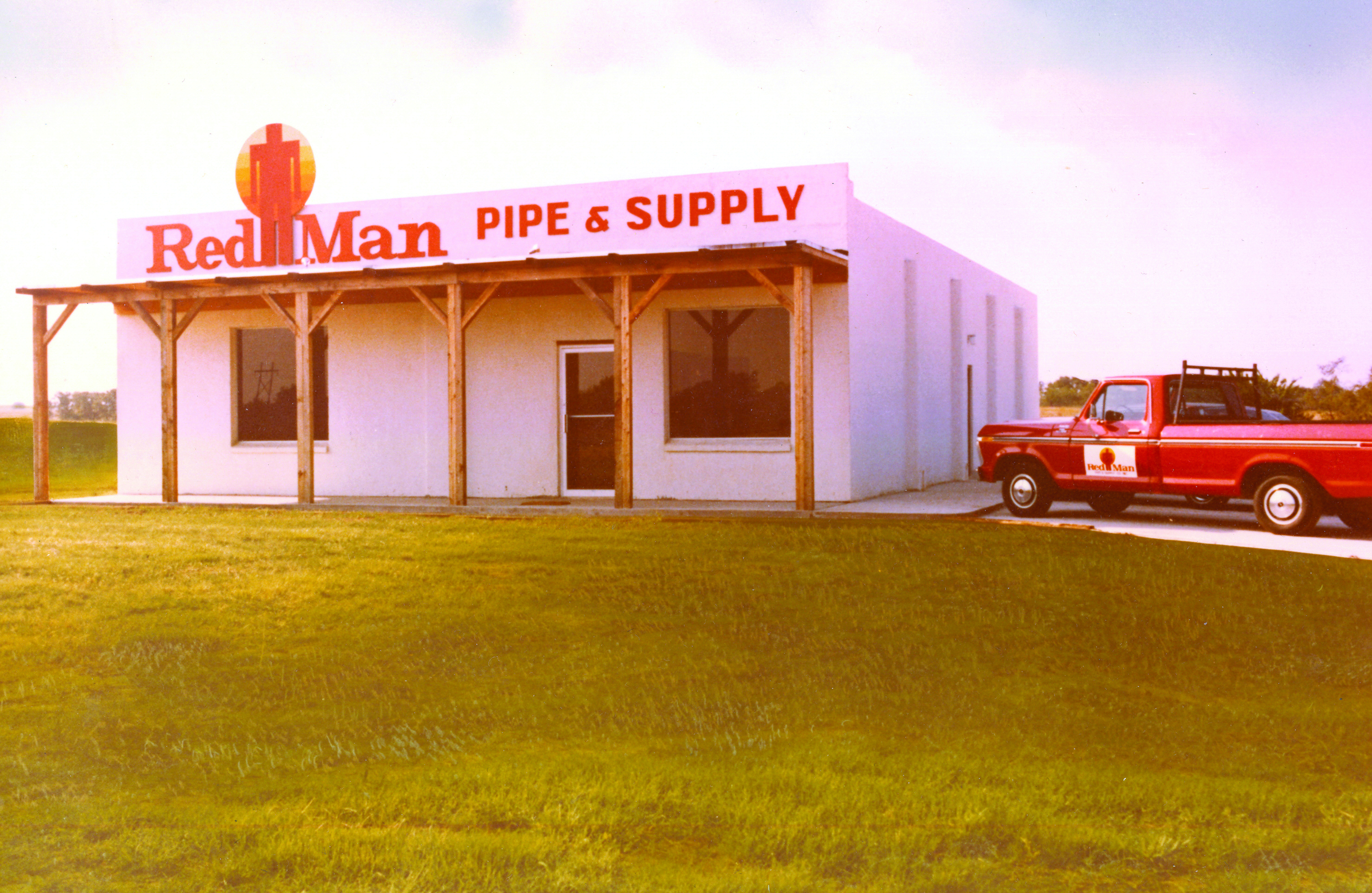 This particular move was unlike anything MRC Global had ever seen. It accomplished a strategic goal for the company that had been in place since very early in Lane’s time at the helm: a single, world-class facility that would serve as an all-encompassing snapshot of the company’s global, value-driven capabilities.

“There was no racking or product,” recalls Dan Churay, executive vice president of corporate affairs, whose team would be responsible for the build-out of the multibuilding complex. “It was one enormous shell. I just couldn’t get over how big it was.”

The second directive would forgo the forklift and instead, be built from a keyboard. MRCGO, short for MRC Global Online, was born out of the desire to serve customers as easily and efficiently as possible, and leverage technology to expand the company’s digital interaction with customers.

“As we implemented a modern SAP platform across our international region, we recognized the need to modernize our e-commerce offering,” Bates says. “Rory Isaac [MRC Global’s former senior vice president of business development] championed improvements to our online catalog and handed me the reigns to build on that foundation. Since then, we have consolidated many digital touch points into our MRCGO portal and added functionality and features that make MRC Global easy to do business with.”

The new MRCGO gives customers the ability to shop, track or expedite their orders and connect with an MRC Global support team all with one login from a modern, user-friendly website.

“This is an inflection point in our history, in my opinion,” Bates explains. “Our customers’ expect a digital interaction with us that feels like the one they experience as an individual consumer at home. We need to continue to improve in order to maintain our position, especially today.”

Robert Stein, former senior vice president of business development, recalls when the new MRCGO was first introduced in 2019: “Digital transformation initiatives are investment-heavy and not easy, so you have to stay ahead of the curve just to keep up. I think within our industry, we have always been early adopters when it comes to technology that can help our customers.”

The development of MRCGO as an end-to-end, digital supply-chain solution touches individuals from nearly every department and every region in MRC Global.

Embracing Change for the Next Chapter

Change is something MRC Global has weathered before. In the last century, the company has navigated the currents of an increasingly interconnected, global economy alongside its customers.

“MRC Global’s success is built on our people, ethics and dedication to our customers,” says Rance Long, MRC Global’s current senior vice president of business development. “We learn and evolve so that we can take really good care of our customers. That’s what really sets us apart. That’s what will continue our legacy.”

On March 9, 2021, the company announced that Rob Saltiel would lead MRC Global in its next chapter.

"I am honored to accept the role as MRC Global's next CEO,” Saltiel says. “MRC Global is an excellent company with talented employees, a [robust] e-commerce platform, a global distribution network, a culture of customer service and a solid balance sheet. I look forward to working from the strong foundation established by my predecessor, Andrew Lane, and to helping our company grow for the benefit of our shareholders, employees, customers and suppliers."

You can read more about MRC Global’s collective story and read through moments that mattered to individuals who helped build the company at www.mrcglobal.com/100years.

How a Century of Moments Built MRC Global