This and other fluid exchange technologies provide real solutions that play a vital part in converting our building stock over to heat pumps.

When we are talking about water energy, there is another type of hydropower that has to do with using water movement to transfer energy in the form of BTUs. It is one of the most basic and simple uses of water in every form. It has been safely done for generations and is the most efficient form of heating and cooling energy transfer.

Did you know that a federal law cited in the Energy Policy Act of 1992 permits drinking water energy exchange?

The legislation uses language such as “allowing the installation of geothermal heat pumps … to permit public and private water recipients to utilize the flow of water from, and back into, public and private water mains for the purpose of providing sufficient water supply for the operation of residential and commercial geothermal heat pumps.” (Chu, 1992, https://bit.ly/2L6O7JH). I will share more on that later in this column.

In New York City, one of the bills currently being heard in council chambers involves hydroelectric power using the city's aqueducts. This is the same fundamentally as using the city's aqueducts to transfer thermal energy. Actually, the conduit hydropower system is more intrusive, as the impellers are in the water stream. In the case of thermal energy, the drinking water is isolated by a double-wall titanium heat exchanger.

Geothermal exchange is generally known to be a technology that exchanges heat with the earth through closed-loop boreholes. While this is the most fundamental approach to geothermal heating and cooling, a broad-spectrum approach that involves all the authorities having jurisdiction provides a symbiotic relationship between the utilities that improves each part's function.

In addition to drinking water energy, there are five other types of fluid exchange in dense urban environments that may be used to help heat and cool buildings (Figure 2): 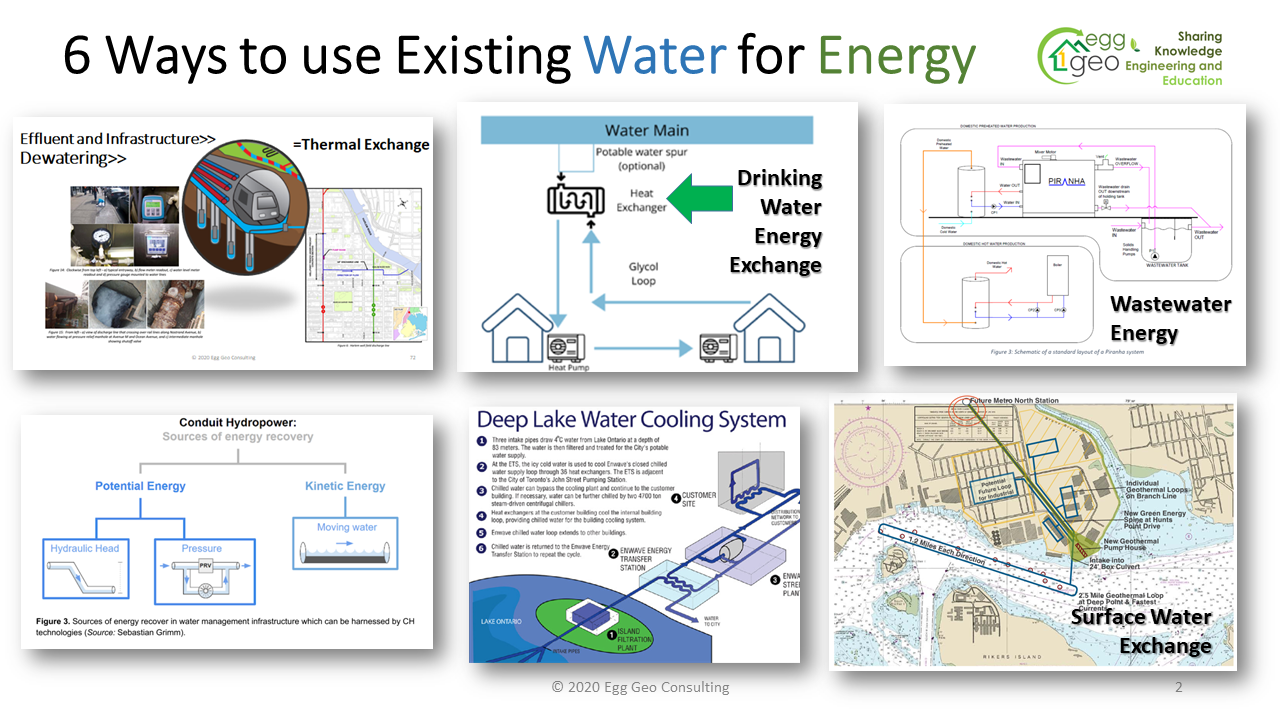 Hydropower is energy in moving water, such as oceans, rivers and waterfalls. Hydroelectric energy is generated by converting kinetic energy from water into electrical energy. To harness this power, enormous dams are built to extract, maximize and manage the energy generation. Handling these massive volumes of fluid should always be coupled with thermal energy exchange when possible, such as when these hydroelectric stations are near large city centers (Figure 3). 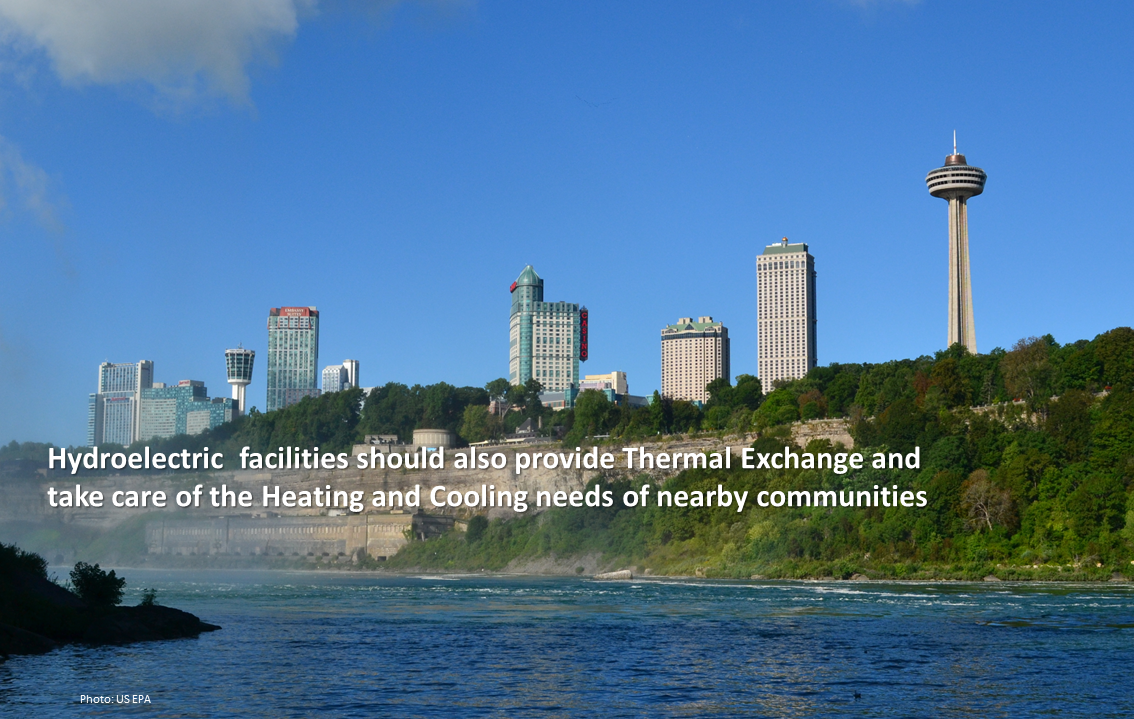 The UK Department of Energy and Climate Change commissioned BuroHappold to study surface water exchange potential (Figure 4). The study showed 6 GW of thermal capacity, enough to heat and cool 7 million homes. Though the United States has no such research, it is reasonable to suppose U.S. capacity would be greater.

Infrastructure dewatering thermal exchange includes ongoing efforts for low-lying cities and infrastructure, subways and conduits that need to be kept dry and, of course, the need for current and future efforts to handle ocean rise. Where relative sea-level rise occurs, it amplifies near-term vulnerability to storm surge and increases long-term flood and inundation risk. 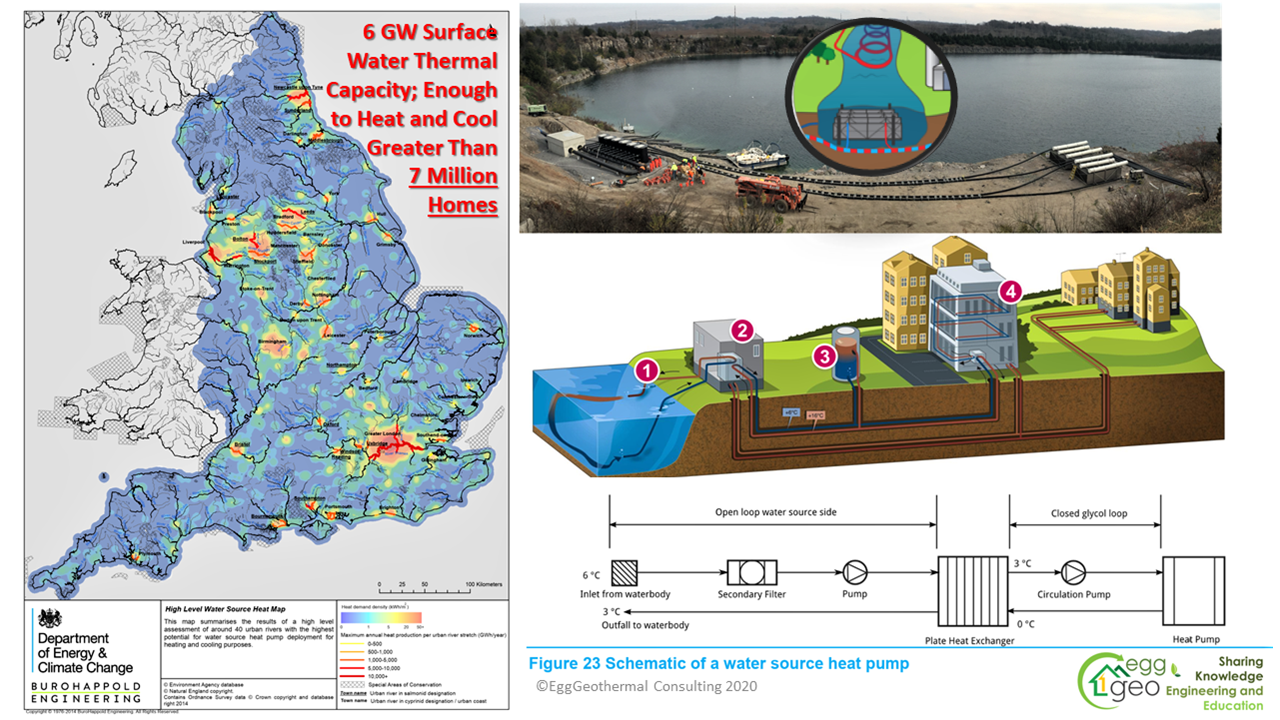 We spend money to heat water that gets wastefully dumped down the drain. A wastewater recovery exchanger system is installed where wastewater leaves the building, extracting and transferring heat to a holding tank that feeds the domestic hot water system (Figure 5). By preheating the water provided to the hot water tank, a tremendous amount of energy, money and greenhouse gas is saved.

In cooling-dominant situations, systems such as Piranha can also simultaneously dump heat into wastewater to reduce air-conditioning loads.

Effluent water thermal exchange opportunities exist in almost every village and community in America. According to the U.S. Environmental Protection Agency, in its “Primer for Municipal Wastewater Treatment Systems” report (EPA, https://bit.ly/3aOuTna), collecting and treating wastewater is the most common form of pollution control in the United States, consisting of a system of sewers and wastewater treatment plants.

The sewers collect municipal wastewater from homes, businesses and industrial buildings and deliver it to facilities for treatment before being discharged to water bodies or land or reused. Most of this effluent is discharged to surface water rivers or injected into wells. Either way, thermal heat exchange with effluent represents a major opportunity for heat exchange in the communities in which they exist.

There is an urgent effort going into replacing combined systems — an effort that, with little modification, would afford heat exchange to every building served. Stockholm has been applying this effectively (Figure 6). 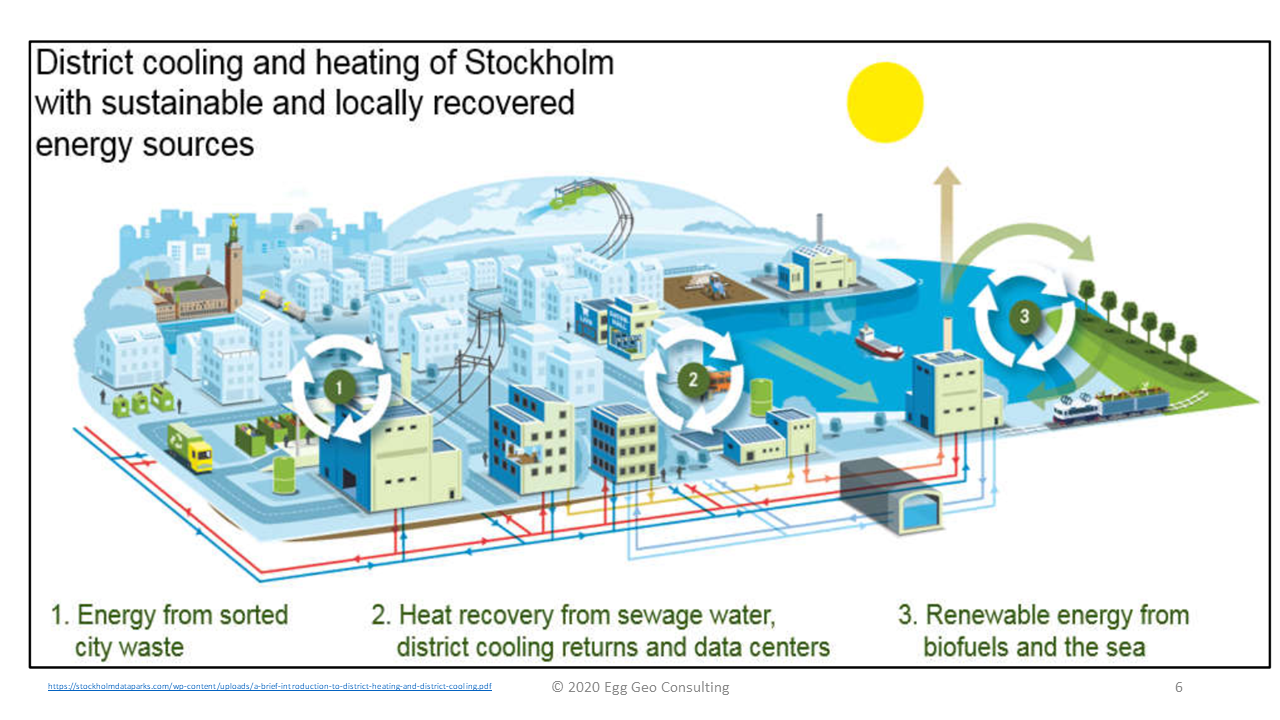 Here is some follow up information on the Energy Policy Law shared at the beginning of the column:

“b. Requiring that geothermal heat pump systems be designed and installed in a manner that eliminates any risk of contamination to the public water supply.”

As we see in Figure 7, drinking water thermal exchange will handle the heating and cooling needs of the Amalgamated campus, as well as several public schools when it is approved. 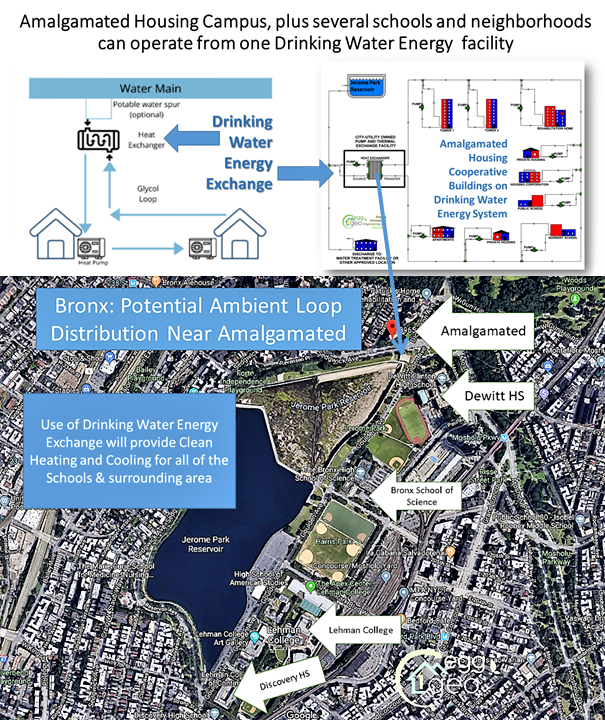 So far, lack of communication between governing authorities and legislative hurdles have been obstacles to implementating clean heating and cooling technologies needed to decarbonize buildings.

A qualified task force that can implement simple yet essential changes and cooperation between infrastructure authorities would accelerate decarbonization and energy-efficiency efforts throughout the city, state and even federal government levels.