“We hear a lot that ‘oh, you guys are spending a lot on technology,’ ” says Andy Hubner, director of business development for “you guys,” meaning Premier Mechanical Inc., a full-service mechanical contractor established in 1994 that currently employs about 90 people in Addison, Illinois. “But when I’m going into a scope meeting, and I see the other guy carrying a rolled-up set of drawings under his arm, I know right there that I’ve got him.”

For a specialty contractor to succeed these days, Hubner says bid accuracy and consistency are key – and the key to providing those attributes is largely through digitized processes that produce not only better estimates, but also provide seamless collaboration throughout the shop to client to jobsite.

“For an estimator, uncertainty is the enemy,” he adds. “I know my price is right.”

That’s because Hubner presents his bid submissions using Bluebeam Revu software to produce a 3D PDF with digital drawings detailed with the most accurate, dependable and engaging information.

It’s a lot more than a static Word doc and drawings. After Premier decided to adopt the system, the contractor added its own customized markups pertinent to its type of fabrication and installation work. Premier’s staff of engineers and estimators plugs in these important details with all the various associated costs. Counts are always correct and up to date since there’s a visual verification for everything. Another feature to the software makes easy work out of addendum processes.

“For a design-build job, it's actually allowing us to show a marked-up drawing with specific equipment manufacturers, model numbers and sizes,” Hubner adds. “This makes a huge difference for Premier, allowing us to compete in a market with competitors that are literally 10 times bigger than we are.”

The company has always prided itself on being technologically savvy.

“Construction is an industry that largely sticks to the way things have always been and may shy away from investing in new ways of doing things,” Hubner explains. “But from our standpoint we don’t try to minimize our overhead, it’s just that we want very productive overhead.”

That notion was never greater for Premier during the last recession in 2008. Premier’s management knew it would have to move more into digital contracting to stay competitive.

“There’s only two ways contractors can go through a recession,” Hubner adds. “They’re either going to cut corners or adopt technology. So, we said we weren’t going to sacrifice quality. Instead, we determined we’d survive though sophistication.”

Premier also tries to match that sophistication to its general contractor customers.

“We want to work for those who demand BIM on their projects,” Hubner adds, “who expect an iPad on their foreman’s hands. That’s the partner we’re looking for because if the GC is more sophisticated, then our margins tend to be a lot better.”

“And we attribute that not to going out and being aggressive,” he explains, “but to giving our customers a very high quality product.”

Here’s one of the least kept secrets in the construction industry – it’s horribly inefficient, particularly considering its outsized economic force.

“Every year, there is about $10 trillion in construction-related spending globally,” said a report from well-known management consultant McKinsey & Co. “This makes construction one of the largest sectors of the world economy. The sector employs 7 percent of the world’s working population and, by building the structures in which we live and work, which create our energy, materials, and goods, and on which we travel, has an impact well beyond its own boundaries. Construction matters.”

Yes, it does. But the report, which came out a few years ago, indicated that productivity in the worldwide construction industry has only grown by 1 percent annually over the last 20 years, woefully behind the pace set by most other major industries.

Industry fragmentation, strict regulations, informality, and dependence on public-sector demands are some of the reasons that the report listed as affecting the productivity of the construction industry. The report also suggests that the productivity issues can lead to inferior project management and execution and lack of investment in skills development, research and development, and innovation.

“To disrupt its own way of thinking, working and building, the construction industry can learn from successes in other industries, as well as from pockets of excellence within subsectors of the construction industry around the world,” the report said. “Change is underway, but many approaches that have been discussed for years have yet to be adopted at the scale needed to transform the industry.”

All this means the construction industry is leaving a lot of money on the table. According to the McKinsey report, if construction productivity were to catch up with that of the total economy, the sector’s value-added would increase by an estimated $1.6 trillion, adding about 2 percent to the global economy.

“This is equivalent to the GDP of Canada, or meeting half of global infrastructure needs, or boosting global GDP by 2 percent a year,” the report says.

What’s more, about a third of that potential or about $500 billion is right here in the U.S.

“While many U.S. sectors including agriculture and manufacturing have increased productivity 10 to 15 times since the 1950s,” the report concludes, “the productivity of construction remains stuck at the same level as 80 years ago. Current measurements find that there has been a consistent decline in the industry’s productivity since the late-1960s.”

The report earmarked a number of steps the construction industry should take to improve its productivity. Not surprisingly, one of those steps was implementing technology.

“Construction lags significantly behind other sectors in its use of digital tools and is slow to adopt new materials, methods and technology,” the report says.

Digital technologies, including building information modeling and advanced analytics have spread rapidly, but the report indicates the challenges related to driving more value from this.

“In our discussions, stakeholders voiced several challenges in deriving more value from digital tools, such as maintaining accuracy in transitioning to virtual models,” the report says. “Frequently, there is no consistent “digital-twin” of a structure, but rather digital models are being printed for use with suppliers, who make changes and optimizations without feeding them back to the models, and there are substantial differences between as-built and plans that make optimizations in supply chains, work processes and life cycle management difficult to capture.”

While technology alone may not address poor productivity, the report concludes that a “fundamental culture change is needed alongside adequate systems, processes and buy-in from the field to embrace these solutions.”

For its part, Premier is doing something about this sorry state of affairs. For one, its use of Bluebeam improves more than just its traditional estimating abilities.

In talking with Hubner and his brother Brandon Hubner, director of operations, one of the first steps in becoming a digital contractor is to recognize the mountain of paper many contractors find themselves buried under without even realizing it. 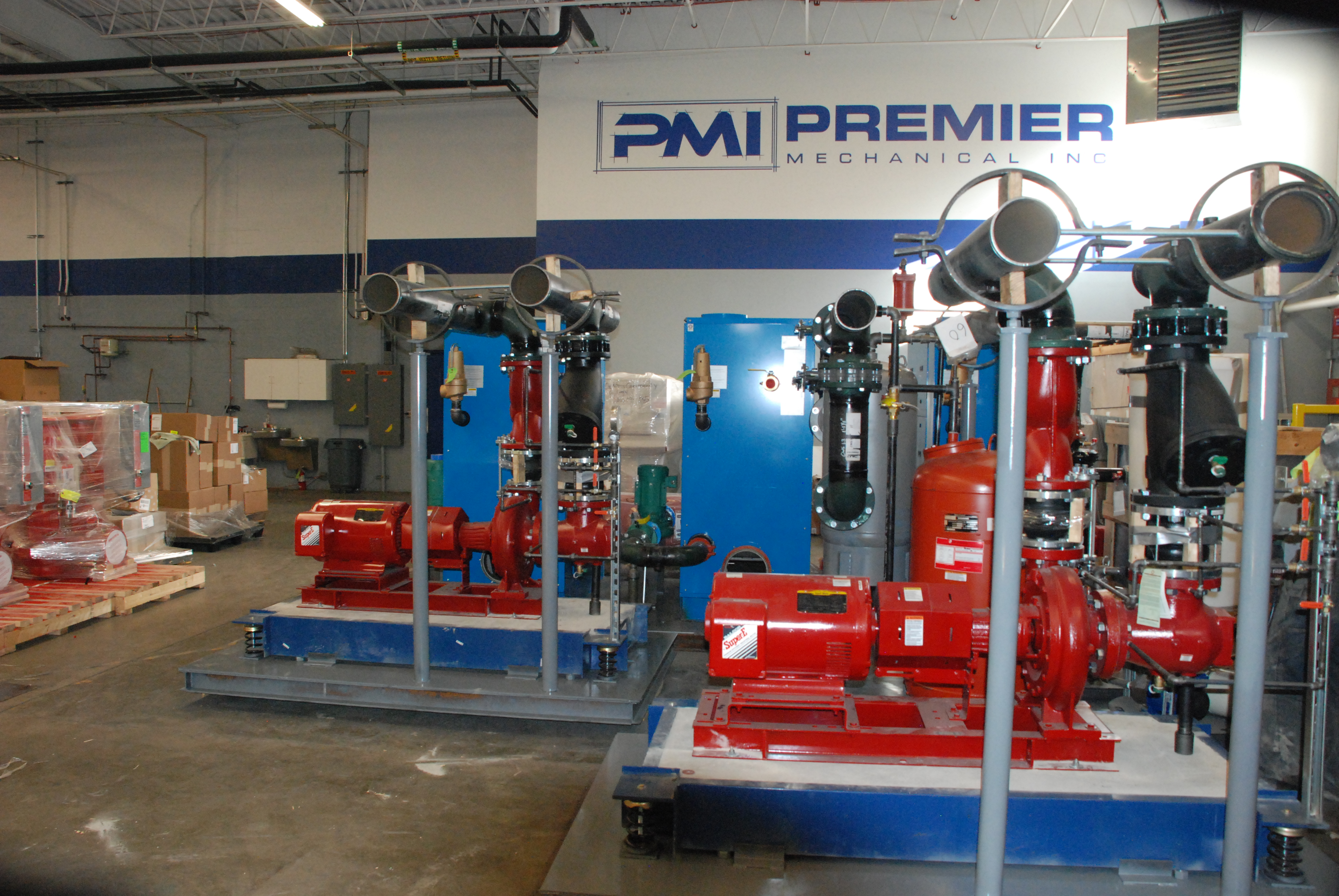 “I honestly believe that I was so tired of walking back and forth from the printer and then having to get these drawings back to the shop all while having people ask me questions about what things were done and never being able to find the paperwork later,” Brandon says.

As with estimating, Brandon can use the Studio Sessions feature to set up fabrication work for its pipefitters from Local 597 to handle at Premier’s 25,000-square-foot prefab shop.

“I don't have to print out a spool packet and hand it to them,” Brandon explains. “I just upload the files into the Sessions and the crew gets the email and they're fabricating.”

Every workstation in the shop now has an iPad running Revu, which eases collaboration.

“There are very few instances where I have to call the shop and get my answers from one of the project managers because it's all right there on our iPad,” says Local 597 Pipefitter Paul Durham. “It makes me more independent and less dependent on the paperwork. I look up what I need and buzz through it. I can click when I'm done, and they know that we're done, and we get our next set of drawings through it.”

“Prefab” and “manufacturing,” of course, share plenty in common. When we first met, Andy showed us a copy of “The Goal,” written by management consultant Eliyahu Goldratt in 1984 that Andy referred to as a common source of inspiration for Premier.

The book, written as more of a “management novel” describes the work done at a fictional manufacturer where everything is always behind schedule. The book, heralded as one of the most influential business management texts, describes how bottlenecks occur and what can be learned from them.

“We read a lot about manufacturing,” Andy adds, explaining how the prefab’s workstations are set up for optimal conditions.

“Basically you want fabricators to stay in close proximity to what they need,” Andy adds. His fabricators not only have a handy iPad, but large monitors to check with, too, for work orders.

“The screen is big enough so he doesn’t even have to walk over to it,” Andy explains. “It helps them be more productive rather than walking back and forth to a plan table where paper plans can get trashed or other information can get lost.”

That same kind of easy-to-see digital collaboration extends to Premier’s customers, too. Those sophisticated GCs Andy talked about earlier are also demanding to “see” the work throughout a project’s lifecycle.

“You never want to be selling on price, you want to be selling on value,” Andy adds. “Bluebeam Sessions helps us sell on value. We tell them about the workloads and say, ‘Hey we use Bluebeam in our fab shop and we will invite you to the Session, so you can actually see when your project is being worked on in there.’ ”

Premier’s customers can easily log in at any time from anywhere to check the status not just of prefab but installation, too.

“Everyone can see what’s in production now,” Andy adds. “It’s also helped us get paid quicker because normally we’re not getting paid before it’s installed. But now, the second that pipe comes in and it’s tagged for a job, we can start billing for that and it gets approved.”

Andy says its adoption of technology like the Bluebeam program has helped the company make a difference.

“I believe that typically, on average, every job that we lose, we lose by 3 percent or less,” he says. “So how you get that 3 percent out on jobs is through 15 different things, it’s not one thing. But across the a project’s lifecycle, I think technology like Revu helps us get that extra 3 percent eked out to make us more valuable on jobs. Again, I think it all comes down to certainty." l