John Akhoian Has a Better Plan B

Rooter Hero purposefully grows its business by looking out for the future of its workforce.

Considering the success John Akhoian, CEO of Rooter Hero Plumbing, has had, no one would think that a plumbing career was anything other than his plan right from the get-go.

Akhoian founded Rooter Hero, based in Mission Hills, California, in 2011 after owning a home service franchise for more than 20 years. The company, a residential service business with a focus on drain cleaning, currently has 250 trucks on the road with 12 locations throughout Southern California and Arizona. Akhoian plans to expand further with a recent acquisition adding HVAC service to select locations.

But life looked considerably different for him following the death of his father when John was just 17.

“It was a really tough time in my life,” Akhoian says. “I mean, I lost my hero. I was mad. I was frustrated. I was angry. I had a lot of pressure on my shoulders.”

At the time, his mother had a fresh mortgage on the family home and an older son already in college studying architecture. In prompt order, his mother sold the 18-wheeler her late husband drove to give the family a cash cushion to pay bills. John left high school to find work since the family wanted his brother to stick with his college studies.

And that’s how John found himself learning the trade as an apprentice plumber thanks to a family friend, the kind of friend so close that John considered him to be his uncle.

“It was Plan B for me,” he says. “I wasn’t thinking a year before that I was going to be plumber, but I got into it because of the circumstances that took me there. I simply had to go to work to make up the income that dad was making to support the household.”

So, there he was on his first day digging around in a crawlspace of a 30-unit apartment building looking for a water leak.

“I didn’t even know buildings had crawl spaces,” he remembers.

By the end of the day after a number of other calls, Akhoian was completely muddy, completely exhausted and completely sold on a career in plumbing. He admits that he wasn’t doing well in school, anyway. He enjoyed being outside and not stuck at a desk. And he felt the age-old satisfaction of every tradesperson’s motto: I took something that was broken and when I left it was working again.

“It turned out to be the best thing I ever did because I fell in love with plumbing,” he adds.  “I discovered that while I didn’t like school, I loved to learn about the trades. I asked questions all the time from that day forward and wanted to know all I could as fast as I could. It seemed like it was the opposite of going to school.”

Decades later, Akhoian knows there are plenty of people where he was when he was a teenager.

“Plumbing is a Plan B for a lot of young adults,” Akhoian says. “And it really doesn’t have to be that way. Make it Plan A. While I’m not saying plumbing is for everybody, there are plenty of people that should consider the trades as their first career choice. And with more and more seasoned tradespeople retiring and not many young people considering it, we all need to encourage the right people to get into the trades and give them the training to be great at it. There’s money to be made, and we can create wealth for ourselves and our families.” 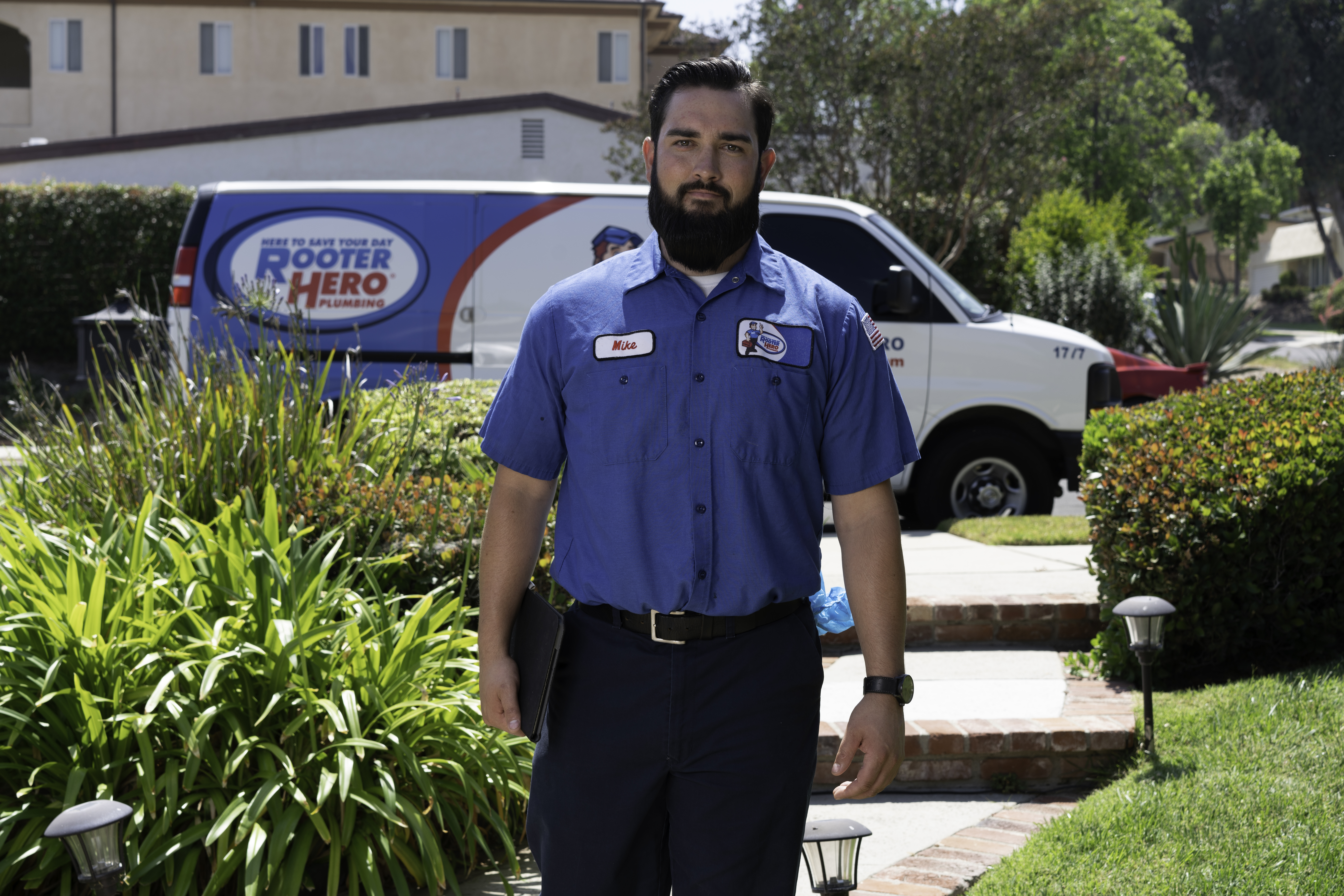 Considering the extent of the industry’s labor shortage, Akhoian has set out to create his own tech workforce.

“Our product is fixing plumbing,” he explains, “but there isn’t enough people out there doing plumbing, and there’s a lot more people retiring from the industry than getting into it. So we learned quickly that we have to actually produce our own plumbers.”

To that end, Akhoian created Hero University, a 12-week apprentice program that can take mechanically inclined individuals who know nothing about plumbing and turn them into basic service plumbers – all while earning while they are learning.

“And over time,” he adds, “we’ll teach them even more and turn them into journeymen plumbers and eventually master plumbers.”

There are some preliminary details first, such as ridealongs and tests to make sure the right people are in the mix.

“The ridealongs have been very important since they’ve given it a try, done some of the work and know what to expect,” Akhoian says. “We’ve started to see less turnover since now they’re more committed.”

Training a Hero U typically means two days in the field with an experienced pro alongside, plus three days in class or at the company’s mobile training unit equipped with all of the fixtures and equipment that techs would use on the job.

Apprentices also get additional education through online training thanks to hundreds of videos the company has created that cover general plumbing repair and drain-cleaning operations.

Techs may be the lifeblood of his business, but Akhoian also relies on many others to get the job done. As a result, all his managers (and techs) go through regularly scheduled training to improve communication skills.

Rooter Hero has a philosophy called “The Five Keys,” which centers on:

“This is a service concept we talk about a lot that actually helps everyone – our staff and our customers – have a better service experience,” Akhoian explains. Part of the philosophy also includes always giving the customers a number of options to solve the service call.

“Just knowing the basics of what to do and what to say is vital,” Akhoian explains. “We always, for example, park curbside and when it comes to knocking on the door, well, a lot of our guys are big so we always make sure that when they knock on the customer’s door that they stand far enough back so they don’t ever crowd the doorway.”

“There might be a baby asleep,” Akhoian adds. “So always knock on the door. That’s what friends do. So, knock and then take a step back and give the customer some space.”

Rooter Hero techs always ask for permission to come in and put on shoe covers once inside. From there, the techs go straight to the problem.

“It’s just a lot of little things that we do that just show that we care about the customers, we care about their homes and we are there to fix problems,” Akhoian adds. “Customers just want us to go in and get something fixed and get that done.”

Besides, the traditional job skills training, Akhoian goes one step further and offers all his employees personal financial training.

Akhoian has even boldly proclaimed he wants to create 99 millionaires. That’s the title of one of his three books.

The “99 Millionaires” book, available for a free download at Rooter Hero’s website, sets out to refute the idea that the only way to become wealthy is to go to college and get hired in a white-collar position. The book illustrates several success stories of Rooter Hero employees, often with no higher education or prior relevant experience, and outlines the principals taught by Akhoian that helped these individuals become millionaires in their profession.

"I have a personal goal of creating 99 millionaires in the home service industry," Akhoian said. "So far, we have 10 millionaires at Rooter Hero, and I want to completely and radically change the lives of 10 times that in our company over the next 10 years."

Years ago, Akhoian heard a quote from famed sales trainer Zig Ziglar that’s guided him through most of his career: “If you help enough people achieve their goals, you will achieve your goals.”

A company is more than just a P&L. Likewise, Akhoian says the people who serve customer all day have live and families and goals of their own.

“It’s my belief that anything a CEO can do to help team members achieve their personal goals will be rewarded, not just in the feeling of peace that comes with doing the right thing, but in tangible results for your company,” he explains. “Your team will be more stable, more engaged, and more focused on serving your customers.”

As a result, the company convenes quarterly meetings that teach the basics of personal finance. The classes teach different aspects of finance. One meeting might focus on putting money into a 401k. Another class might discuss the benefits of owning a home.

Akhoian also encourages his staff to invite spouses or anyone else who has input into the family budget to attend a class.

“They just don’t teach these things in school,” Akhoian says, adding that even people who are earning a sizable paycheck might still be living paycheck to paycheck. “I can help people gain control over their finances, create budgets and live below their means like I do, they will come to work with a clearer mindset.”

Akhoian says he advises his future millionaires to start with awareness: How are they spending their money? Track it for 30 days and find out. Just how much does that morning trip to Starbucks add up to at the end of a month? Also, Akhoian tells everyone to track how they are using their time, too. Are they wasting it on video games or television? Could that time be better spent elsewhere?

“By all means, do and buy the things you enjoy,” he adds, “but put yourself in control.”

What Akhoian is ultimately teaching is peace of mind.

“Even if the information I’m giving them doesn’t concern the workplace directly, it benefits the whole person, the whole family,” Akhoian says. “That’s help I’m privileged to give. You’d be surprised how many team members this type of advice will positively impact. It will give their time at work a greater scope, one that has direct and lasting benefit for them and their loved ones.”