That $9 billion figure is just enough to replace 25 percent of Massachusetts’ aging natural gas infrastructure — and expected to take two decades. We can read stories of other northern cities such as Chicago and New York and realize that aging infrastructure is a real concern.

It's essential to realize from the outset that the cost of replacing infrastructure is only the beginning of the challenge. Due to the hard work and unyielding efforts of groups such as the Home Energy Efficient Team (HEET), Mothers Out Front and the Gas Leaks Allies, Massachusetts legislators understand that the state’s aging natural gas pipelines are leaking methane, adding to the challenges of reducing greenhouse gas (GHG) emissions.

In fact, it has been determined that unburned natural gas, or methane, is a more potent greenhouse gas than we could have imagined; it has 84 times the impact of CO2, an impact lasting 20 years, notes the International Panel on Climate Change. Concerning global warming and climate change, natural gas is considered a top priority for elimination. (For more information, see the article links in the sidebar.)

HEET realized early on that there may be an opportunity here. Failing natural gas distribution lines are typically replaced with a high-density polyethylene distribution line (Figure 2). As fate would have it, the same material works quite well for an ambient geothermal distribution line. 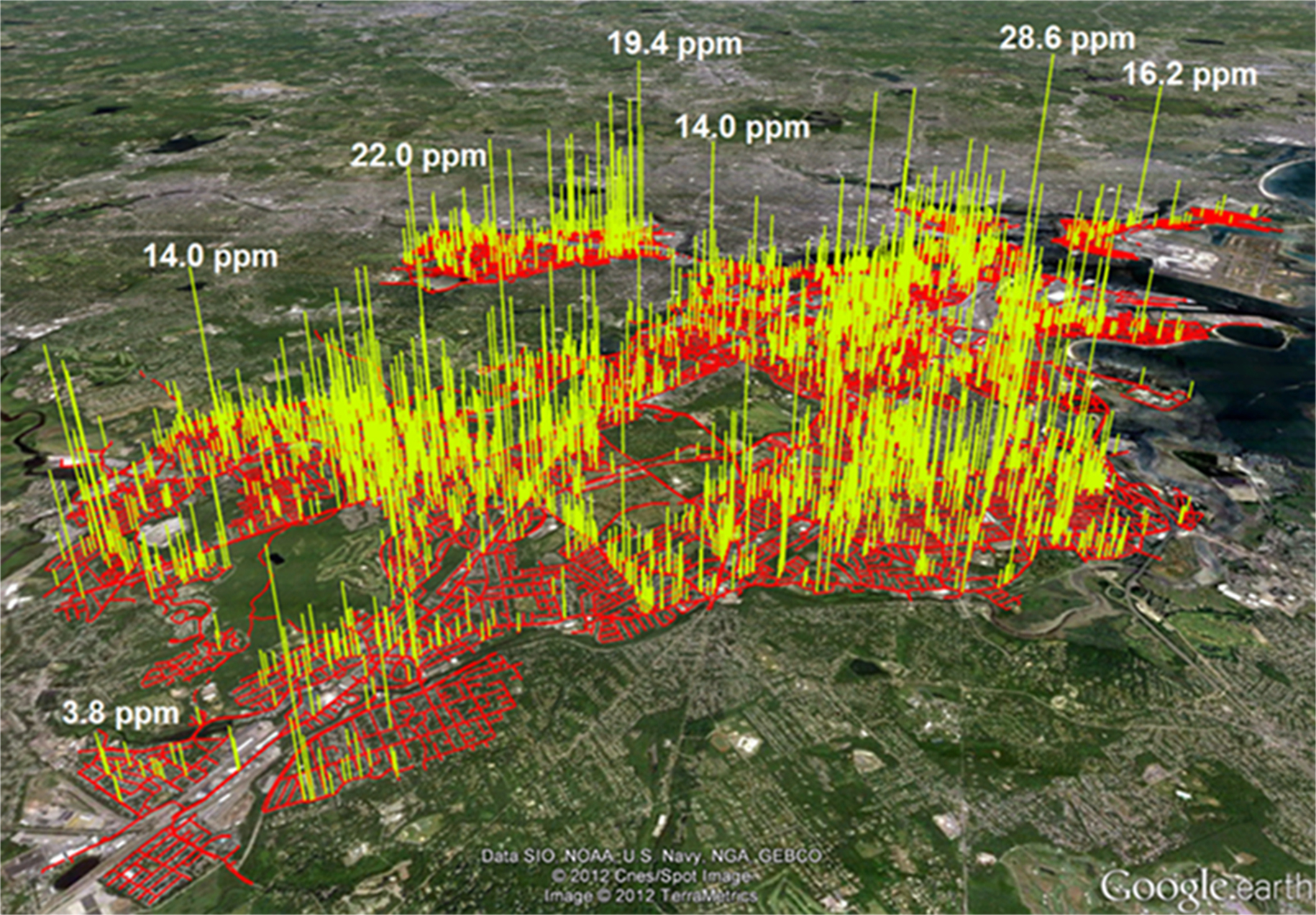 I met Zeyneb Magavi, the director of HEET, in early 2019. I then had the privilege of spending some time talking with her at the April 2019 NY-GEO Conference in Albany, N.Y. I have followed the incredible efforts of HEET and Mothers Out Front in recent months. Then, in October, when the study came out from BuroHappold, I was impressed. I spoke with Zeyneb in November to better understand how both groups have accomplished so much in Massachusetts.

HEET is an 11-year-old organization that began by doing energy-upgrade work-parties. It wanted to teach volunteers hands-on skills to help them save energy in their homes and lower GHG emissions. HEET’s mission is to cut carbon emissions through systems changes and improvements.

Six years ago, the map of the methane leaking from Boston’s natural gas system (Figure 3) was produced by a high-precision methane analyzer installed in a GPS-equipped car and published in 2013 by a professor at Boston University.

The shocking image ended up on the front page of the Boston Globe and led directly to the passage of a 2014 law (Massachusetts Law, Chapter 149) that, among other things, required annual gas leak reporting. A year after this leak law passed, the McKain study was published, concluding that 2.7 percent of the gas coming into the state was being released unburned into the atmosphere, with enormous impact on the state’s GHG footprint.

During the same period, gas utilities quietly filed their leak location lists to Massachusetts’ Department of Public Utilities (DPU), while HEET was mapping the data onto public, searchable leak maps.

Mothers Out Front became involved in 2015 and used the leak maps to place signs at all the gas leaks in Cambridge. This got a lot of attention, which soon spread to other areas. This mother-led organization brought the message across state lines, building a regional, multistate campaign to stop natural gas expansion. They are a powerful and clear moral voice for communities, families and children.

In 2016, the Hendrick et al. paper was published, identifying fugitive gas emissions and illustrating that a 7 percent leak rate (much higher than the previous 2.7 percent from the McKain study) was responsible for 50 percent of the methane emissions. This resulted in a law requiring the prioritized repair of substantial leaks, the first law of its type in the nation (Massachusetts Law, Chapter 188, H.4568).

In 2017, HEET spearheaded the Large Volume Leak Study. It determined that there was no technology available to accurately identify these leaks, so HEET worked with natural gas utilities to develop new methods. Magavi was studying for her master’s degree in sustainability at the time and was able to throw herself into this work. HEET, together with its allies, developed the FLUXBar (Figure 5) and established the Leak Extent Method. 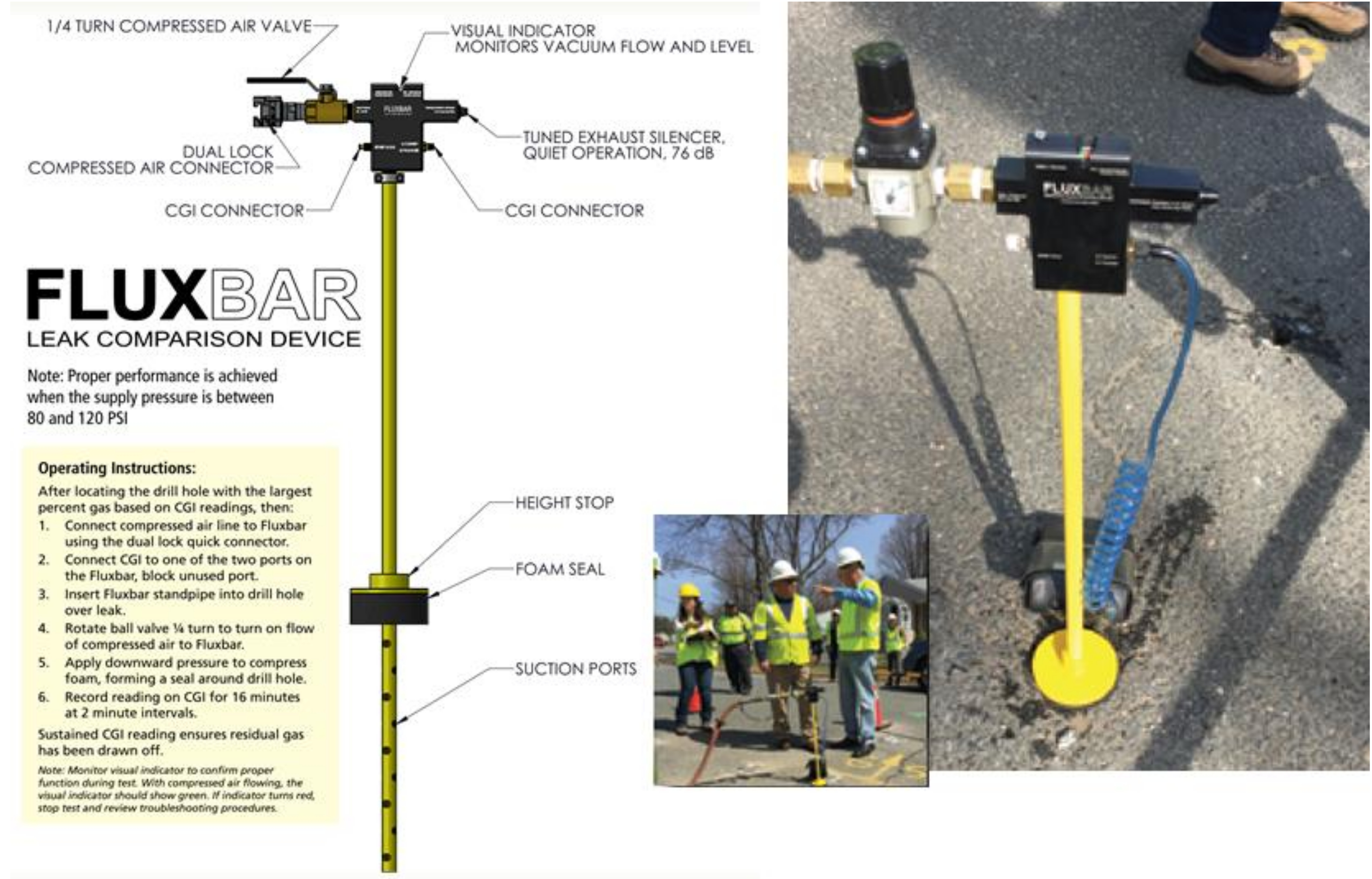 The combination of HEET and Mothers Out Front has proven to be a vital common thread for many reasons. People listen to moms. Think of Mothers Against Drunk Driving and the group’s success. Moms have changed things for good. When we add in the science brought by Magavi and a host of other contributors, they were closing in on a solution.

The presidents of the largest gas companies in Massachusetts and the leaders of the Gas Leaks Allies spoke together, with Magavi sharing the stage with President Bill Akley of gas utility Eversource at a 300-person summit at the Massachusetts Institute of Technology.

It was at this summit where they announced their Shared Action Plan — an agreement with the three utilities to use the Leak Extent Method, accelerate the repairs of the significant leaks, have HEET verify the leak extent measures as well as the repairs, and participate in a joint annual reassessment to consider any new technologies. They jointly filed comments at the DPU and their shared action plan became a Massachusetts regulation in March 2019.

Boston’s natural gas system is 43 percent leak-prone. The map in Figure 4 shows only the leaks targeted for the next five years. Repairs and upgrades (for all of Massachusetts) are likely to cost $9 billion over the next 17 years. With a 40-year amortization, these would become “stranded assets.”

The obvious answer is beneficial electrification, which is why the state has been looking seriously into renewable energy alternatives.

In looking toward these clean technologies, state officials were concerned that air-source heat pumps (AHPs) don’t work everywhere, and would place a tremendous burden on the electric grid — much higher than ground-source heat pumps. More importantly, not all consumers have access and this model alone would require the collapse of the gas industry.

What they were looking for was something safe, renewable, resilient and reliable at a low cost for consumers while allowing gas utility workers to keep their jobs with minimal legislative and regulatory change. It also would need to be scalable and flexible. (GeoMicroGrids have piped infrastructure, similar to a water main.)

Then on Sept. 13, 2018, excessive pressure in natural gas lines owned by Columbia Gas of Massachusetts caused a series of explosions and fires to occur in as many as 40 homes, with more than 80 individual fires in the Merrimack Valley towns of Lawrence, Andover and North Andover (Figure 6). One person was killed and 30,000 were forced to evacuate their homes. This catastrophe helped to spur efforts toward renewable, noncombustible solutions. 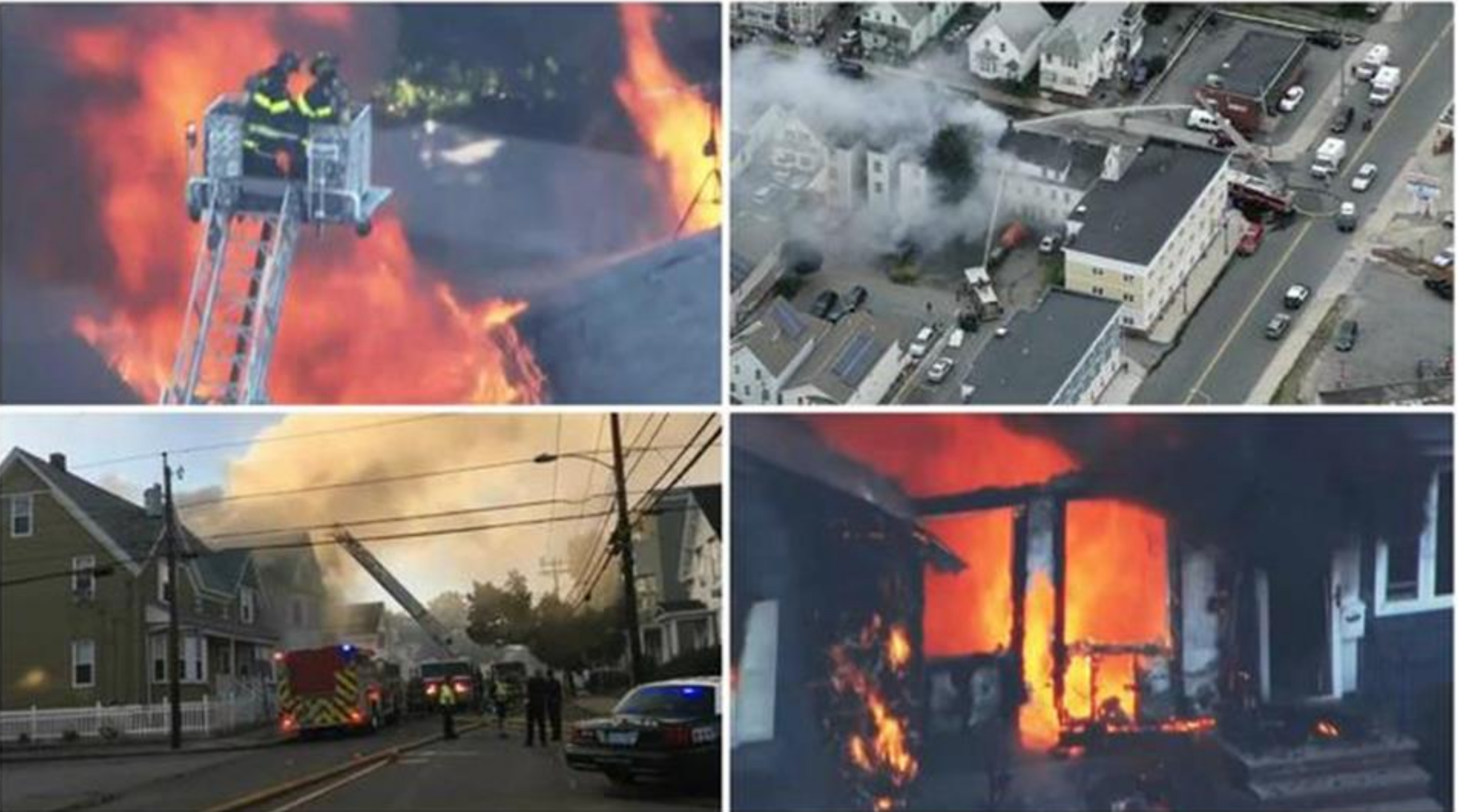 HEET released an RFP in late fall 2018, and in a webinar presented the first image as a GeoMicroDistrict, which would evolve into this grid pattern of branches (Figure 7). BuroHappold was awarded the project and produced The GeoMicroDistrict report, which concluded that the system “re-purposes the existing public utility structure, financing, workforce and customer base to deliver safe, clean and affordable heating and cooling.” 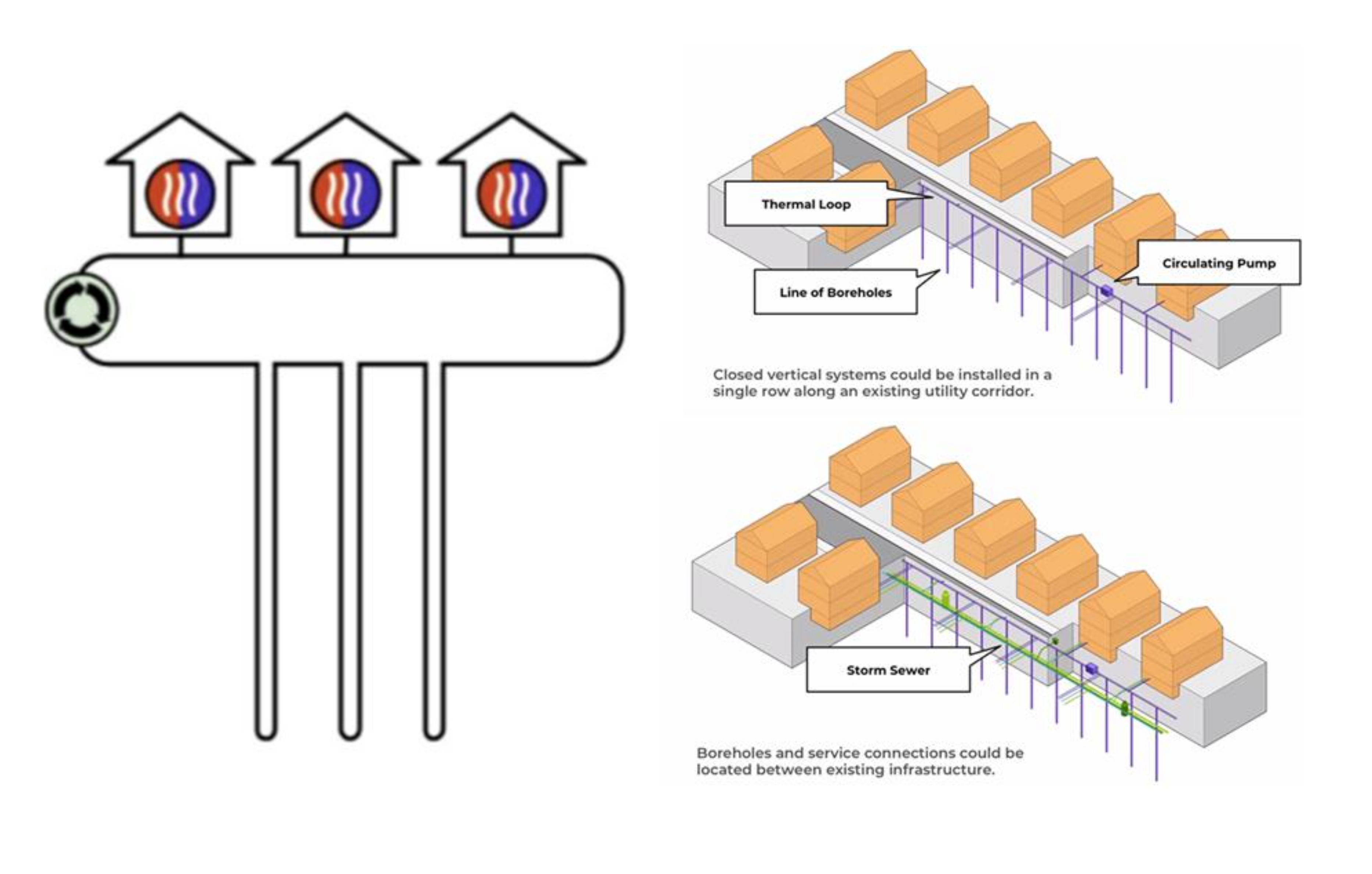 The GeoMicroDistrict system would be installed and operated using the existing right-of-way. It would consist of vertical boreholes and an ambient water loop connecting to the ground-source heat pumps in a customer’s building.

There are three different scenarios (Figure 8) for the GeoMicroDistrict: multifamily buildings, dense urban or mixed-use, and purely residential. The system will use ground-source heat pump technology, which uses electricity to transfer heat from the ambient temperature GeoMicroDistrict (in the ground) to a network of geothermal heat pumps (GHPs) to provide clean heating and cooling for the buildings within each of the districts.

At a recent legislative hearing, gas utility Eversource described this geothermal network demonstration they proposed to the Massachusetts DPU to prove the effectiveness of the geothermal network loops. This is the alternative that will be proven useful to replace the natural gas system over time.

To accomplish this, the Gas Leaks Allies, including HEET, worked together with legislators to create the For a Utility Transition to Using Renewable Energy legislation, or the FUTURE bill (H.2849/S.1940), hoping for passage in 2020.

The FUTURE bill would create a renewable thermal credit market for gas utilities, allows them to bill for BTUs, and gives them a path to evolve into renewable energy companies.

Starting in 2016, Ontario, Canada, had a great deal of traction in a similar effort. Legislative hearings proved the conversion to geothermal exchange was both an environmental and financial win. This culminated in the following statement from the president of the natural gas utility Enbridge, Jim Sanders: “That’s why we’ve announced an official partnership agreement with the Ontario Geothermal Association, and we’re excited about the model we’ve been working on.”

Much like the effort that was moving forward in 2017 with the natural gas utility Enbridge in Ontario, the path forward in Massachusetts has been proven financially feasible and practical. The geothermal model provides a way forward for gas and electric utilities to work in harmony as GeoMicroDistricts replace the gas infrastructure, and new heating needs are met with new ambient geothermal networks.

To learn more about geothermal technologies and receive CEUs at the same time, check out the “Introduction to Geothermal Systems Technology” at http://bit.ly/2OSQdJC.

Note: The terminology GeoMicroDistrict, ambient geothermal networks, pipelines or distribution as applied to geothermal systems are used interchangeably. These all have the common thread of an ambient or an earth temperature fluid pipeline used as a utility to provide energy exchange for geothermal heat pump systems in homes and buildings.

Special thanks to Zeyneb Magavi for much of the information shared in this column. She led HEET’s Large Volume Leak Study, which developed a method to rapidly cut emissions from leaking pipe in half. She has worked at BBN Technologies, Harvard University and in multiple start-ups. Her healthy home renovation in 2008 was in a USGBC Greenbuild tour on PBS NOW. She is committed to creating and driving forward just and wise solutions to the urgent challenge of climate change through multidisciplinary problem solving, co-creation and innovation.