Making an Impact through Integrity and Respect

Don Maloney’s mark is an amazing legacy – actually one that is in his blood.

When we look at individuals for consideration as The Wholesaler’s Person of The Year, we focus on leaders, change-makers and those behind the scene who have made a positive impact on the industry. We look for that special something a person has that helps innovate the wholesale distribution sector.

The saying, “You either have it, or you don’t,” is about that unique characteristic that defines an individual. “It” could be magnetism, charm, integrity, character —when that person walks into a room, you gravitate toward him or her.

This type of individual is usually thinking of how to help others — giving of themselves and always offering a kind word or a piece of advice. A statesman with understated elegance. This is how I define Donald “Don” Maloney, president of Beaumont, Texas-based Coburn Supply Co. For these reasons and more, he is The Wholesaler’s 2019 Person of The Year.

Maloney is a soft-spoken man with a great sense of style, charm and humor. Born in New Orleans and raised in Lafayette, his family lineage runs deep in Louisiana; you can hear it in the smooth cadence of his voice and his gentle but profound presence. His ability to connect is easy to see and has forged lifelong friendships from partnerships in the industry. 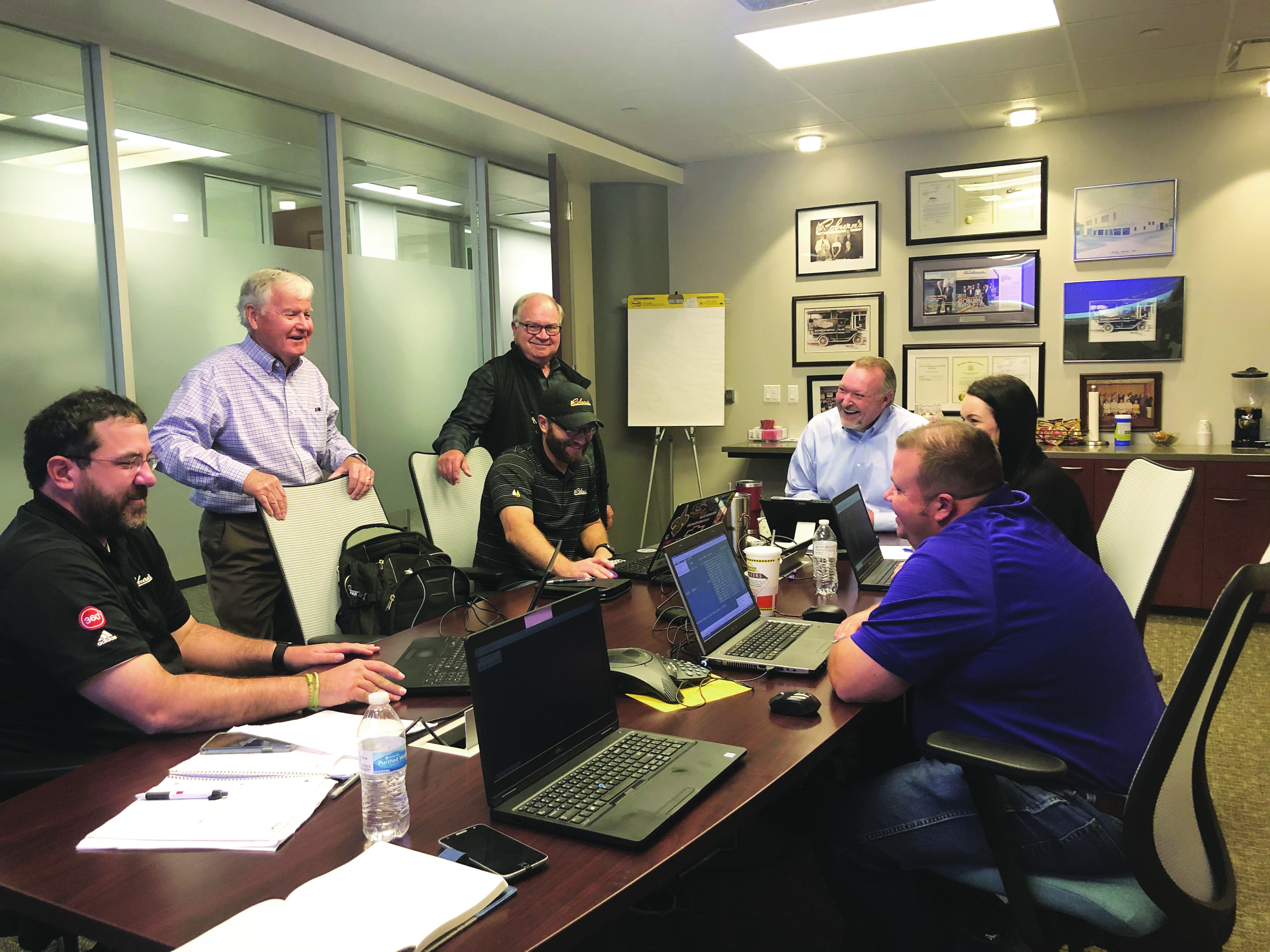 “Don Maloney personifies honesty, integrity, family values, trust, a caring and true partner,’ notes Mark Whittington, Elkay’s executive vice president of trade sales and operations. “I have had the incredible opportunity to get to know many of the exceptional leaders in this industry, and Don stands tall among that group. He has been a sponsor, mentor, counselor and, more importantly, a valued friend to my family and me. I am forever indebted to him for what he has done for me over the past 10 years. I am a better person because of him.”

His path to 50 years in the industry has a typical ring to it.  After graduating from college, Maloney was residing in Houston in the management training program with Sears Roebuck. One day, the phone rang with his father, Arthur Maloney, president of the family company, on the other end of the line. “My dad called and said something happened at the store in Lafayette and asked if I would go to work there,” Maloney recalls. “Lafayette was my home, so I left Sears and headed back.” He didn’t realize at the time that it would grow into more than five decades of service to his family.

Arthur Maloney, a no-nonsense man, ran the company with a strict yet fair style, and the belief that no one was above another. Don Maloney started in the warehouse and worked his way through the company. He recalls an incident when he first arrived back  - there was a mess in the warehouse left from transients that would find their way inside. Maloney’s father, while touring the warehouse with Don and 20 other workers, came upon the refuse.

“My father looked at me and told me to grab a shovel and clean it up,” Maloney says. “I was a little taken aback, but I understood he was making the point that nobody is above any other person. So, I cleaned it up. My dad instilled in myself and my brother that you don’t ask people to do what you wouldn’t do — and we live by that golden rule.” 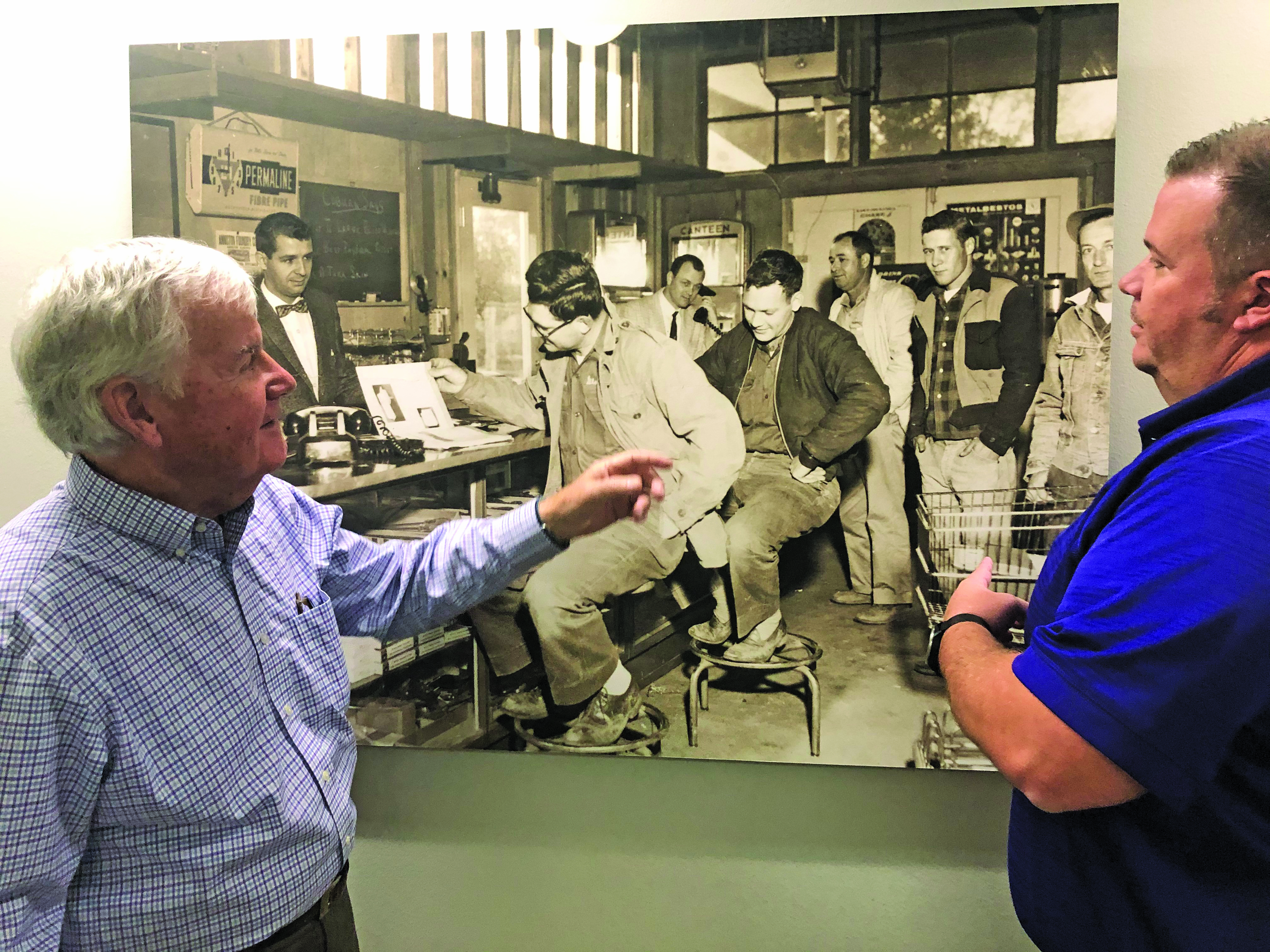 Maloney worked his way through the different departments to learn the business — from the warehouse to the counter and, eventually, the management team. Then, on New Year’s in 1973, it all changed.

“I had just gotten back from vacation and my dad said to me, ‘You are moving to Beaumont.’ I was in shock,” he says. “The vice president of the company had passed away and my dad wanted me to take his place.  “I said ‘do we talk about this?’ – and with a chuckle, he adds – ‘we didn’t talk about it – I moved to Beaumont.”

“I always wanted to be here —
I thought it would be something challenging and fulfilling,” Maloney says. “I liked this side of the business — the relationship building and the lifelong friendships that I saw form along the way.”

Maloney leads the company with a hands-off management style, allowing individuals to contribute by being part of the ideas and solutions process. He empowers individuals to take an idea and run with it; he trusts in their abilities. This empowerment and bond are how he has made such an impact in the industry. “It’s about empowering people to take ownership of their ideas, create a solution, and implement it,” he notes.

This trust in people comes from him knowing and appreciating his employees. “It’s a respect for the individual,” Maloney explains. “It’s something that we grew up with. You get to know individuals — and by name. You know the truck driver, the warehouse workers, the individuals in the accounting department. Whoever it is, you know, and you treat everyone with respect. If you don’t, you’re going to find another job.”

Maloney has been an active industry volunteer. He is one of the founding members of the Embassy Buying Group, established in 1991 as a member-owned buying group consisting of owners of independent plumbing, PVF, HVACR and waterworks wholesalers across the United States.

“As a founding father of the Embassy Group, Don always brings a steady hand and wise counsel to any meeting,” says William (Bill) Condron, president and CEO of The Granite Group. “But it’s his sense of humor and humble approach that sets him apart. No matter the situation, I marvel at how he can lighten a mood and put everyone at ease. He mixes a well-earned gravitas with a casual wit in a way that makes him one of the most respected and successful leaders in our industry.” 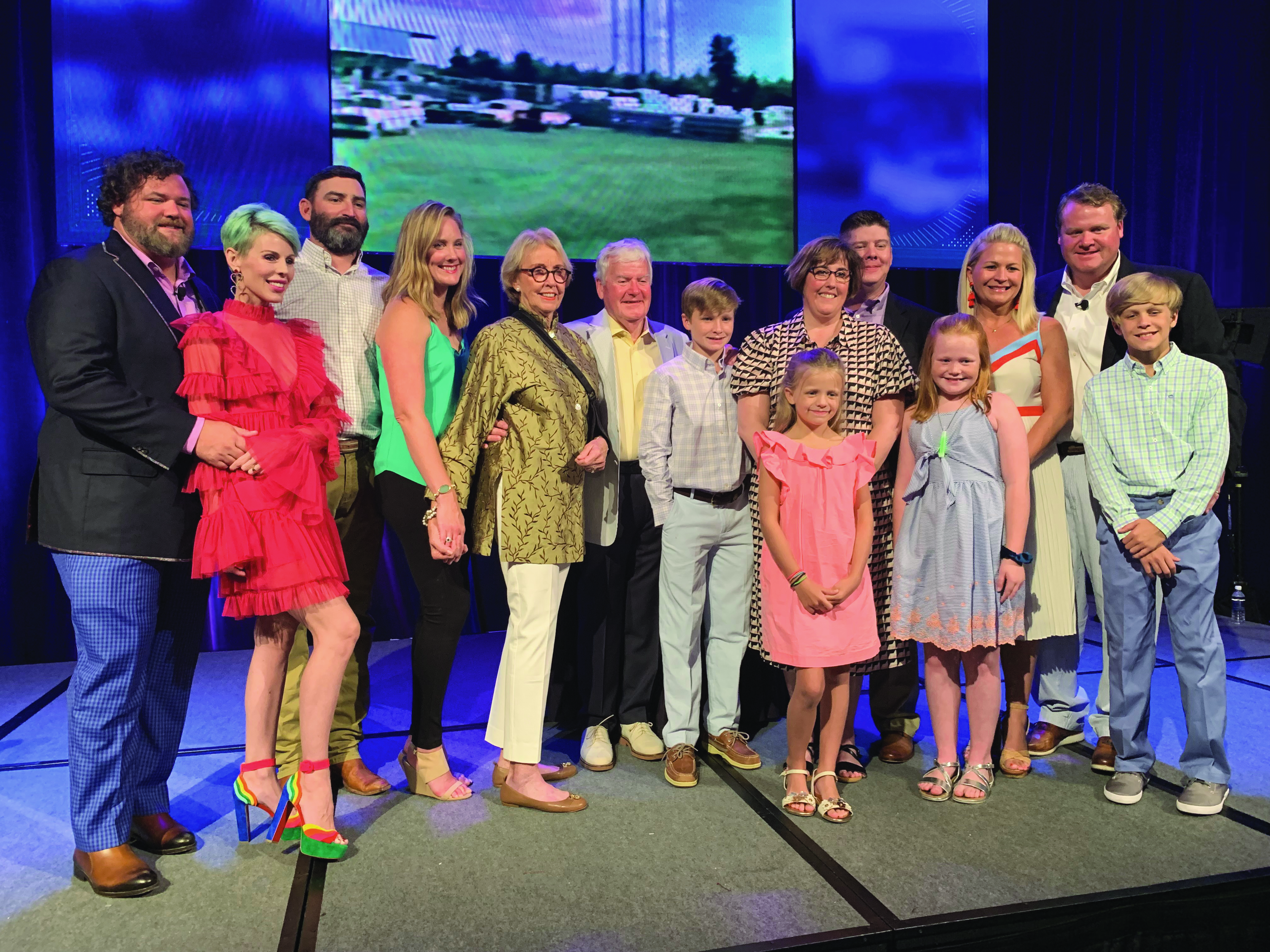 He was a volunteer leader in the Wholesalers Distributors Association, a regional affiliation of the American Supply Association (ASA). Maloney became involved because, as is typical in this industry where friendships are made -  his friend and mentor, industry veteran John Vogt, told him to as he would meet a lot of people who could help his business. Both men shared the belief that being involved, and volunteering makes for a stronger industry.

“I served with Don at WDA, ASA and the Embassy Group,” notes John Vogt, chairman at National Wholesale Supply. “He is a man of great integrity and a good friend. He is truly deserving of the Person of The Year honor!”

Maloney rose through the volunteer chairs at ASA and became its president in 2001. “That was a tough time — the association was going through restructuring from its regional affiliations, its trade show was suffering, and consolidation within the industry was occurring,” Maloney explains.

He knew that to be successful, the association needed to bring groups together, instead of breaking apart. “The role of the manufacturer was not clearly defined within ASA, and we understood that we needed to provide their voice within the channel,” he says. During this time, ASA created a seat on its board of directors for a manufacturer to hold. It also formed its Associate Member Division, allowing manufacturers to become members of the association. In essence, these actions solidified the industry collaboration and laid the foundation for its unified partnerships today.

“Don Maloney stands out as a unique leader in our industry,” says Frank Finkel, director of business development at Ferguson Enterprises. “He quietly has put his imprint on ASA, Embassy and of course Coburn’s. His thoughtful, well-reasoned ideas have contributed to the success of the entities he has led. His philosophy can be summed up easily — Laissex bon temps rouler!”

Recently, Coburn Supply celebrated its 85th anniversary in New Orleans. The event — a weekend celebration for its employees and their special guests, as well as industry guests — was attended by more than 2,000 individuals. It was a momentous three-days, and in typical Coburn fashion, the hospitality reflected the spirit of giving and honoring everyone in the room, a characteristic that has helped the company be where it is today. Maloney said it best when asked what his motto is: “Work hard and play hard.”

It was an orchestrated masterpiece, with Don and AJ greeting each individual by name, shaking hands and welcoming them to the celebration. It was evident the family of employees is, in a real sense, family. So much so that a sign hung in the lobby of the hotel that read, “We are a business built on family, and our employees are part of that family. We appreciate every single person who has helped build Coburn’s into the company it is today, and we know that all things are possible with a talented, hard-working team like ours.” 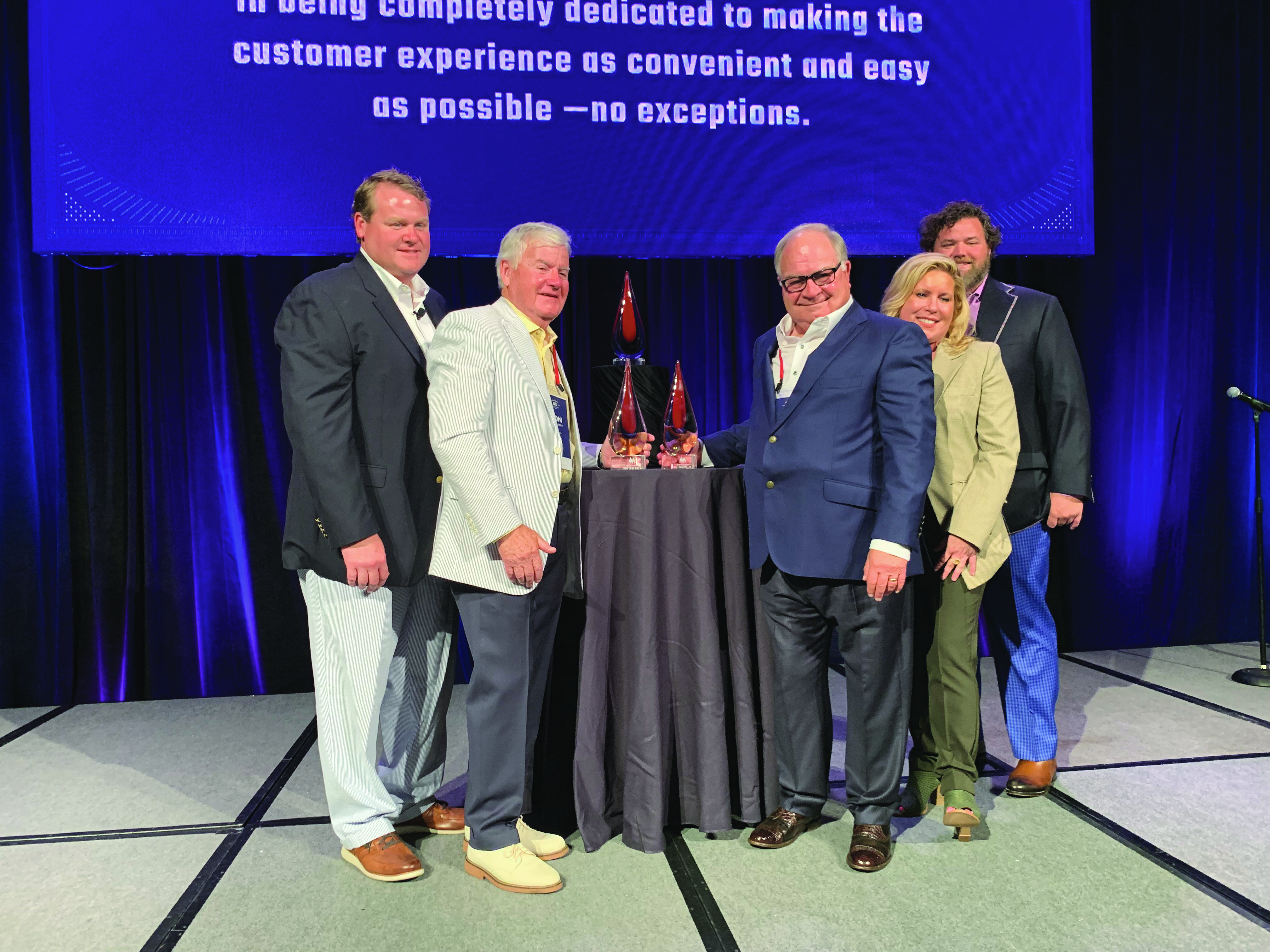 During the banquet gala event on the Saturday evening, a video was shown highlighting several employees who told their stories of coming to work for the company, and what Coburn’s meant to them. The video embodied the spirit of the company, its workers, and perfectly summed up the sense of community it has built over its 85 years – and passed down through the generations by its leadership.

During the gala, Patrick, Michael and Christy took the stage to present a new award — the Spirit Award, to be presented to those who embody the spirit if Coburn Supply and live out its values. The first two recipients were Don and AJ Maloney — two pillars of the company who represent all that is right and good at Coburn’s.

Patrick spoke of his father, Don: “He is absolutely a person of his word, He puts people at ease, no matter what they are talking about. When he talks to you, you know the conversation is genuine and that you are being heard. When he asks you how you are doing – he really wants to know – how you are doing. This recipient is my hero.”

Both Don and AJ had no idea the awards were being presented to them – and the moment of humanity and humility was summed up by the expressions on their faces. Don, caught up in emotion, gave a big smile and thumbs up – and AJ did the same. The roar of applause from the crowd was evidence that the awards were well deserved.

I asked Maloney who  his mentors are. I could see the emotion of how impactful those individuals have been. “My family —  my wife, my children, my brother, my parents and my uncle,” he says. “These individuals allowed me to follow my pathway; they have given guidance and, at the same time, challenged me to be the best one can be.”

As he is the third generation in the family business, the fourth generation is there as well,

deeply committed to carrying on the legacy of the company — the character and integrity of the individuals who have built it and guided the way.

Maloney’s advice for the next generation to lead. “I tell them to respect people,” he says. “You will have differences — there is no denying that, but all can be accomplished by respecting the individual. And no job is beneath you. Don’t ask somebody to do something you wouldn’t do yourself.”

Honor, integrity, respect and helping others to be the best they can be — this is how Don Maloney has contributed to and helped positively change the industry. Thank-you, Don, for being a change-maker and an inspiration to so many individuals, both personally and professionally.