Opportunities such as a potable water exchange in a deep lake water cooling system.

In municipalities from Toronto to Valley Stream, N.Y., it works. Let's get real about potable water thermal exchange.

Fifteen years ago, the Canadian city of Toronto started using potable water exchange in a deep lake water cooling system. Three intake pipes run up to 83 meters (272 feet) deep and out to 5 kilometers (3 miles) from the shore. The physics of cold water are factored into the design. Water is most dense at 4 C (39.2 F), ensuring that the cooling water removed from the lake bottom will have a consistent year-round temperature at the system’s intake points.

The cooling water to be used by the deep lake system first goes through Toronto’s standard water treatment process to become regular drinking water; only its heat exchange properties are leveraged by using heat exchangers. The system, as currently installed, can provide 72,000 tons of refrigeration and air conditioning to about 70 downtown office buildings, or 3.7 million square meters.

William Varley, president of American Water in New York, and Patricia Acampora, commissioner at the New York Public Service Commission (PSC) from 2009-2015, were keynote speakers at the International Ground Source Heat Pump Association’s 2016 conference, sharing their passion and ideas for use of the public water system’s infrastructure to provide service connections for geothermal heat pumps (GHPs) in the buildings they serve.

In July 2015, American Water reported that it installed a city-water-main-sourced GHP system for the William L. Buck Elementary School in Valley Stream, N.Y., to feed the school’s new geothermal heat pumps. The project involved a decoupled secondary circuit configuration that returns the water to the main line and facilitates zero water use.

The NY State Public Service Commission was behind the effort and worked on the plan with American Water. Upon successful completion of the test, the water utility will have the opportunity to charge the school for the thermal energy exchanged with the city water main for the heating and cooling of the school. Soon, the intent is for other schools and government buildings to participate. 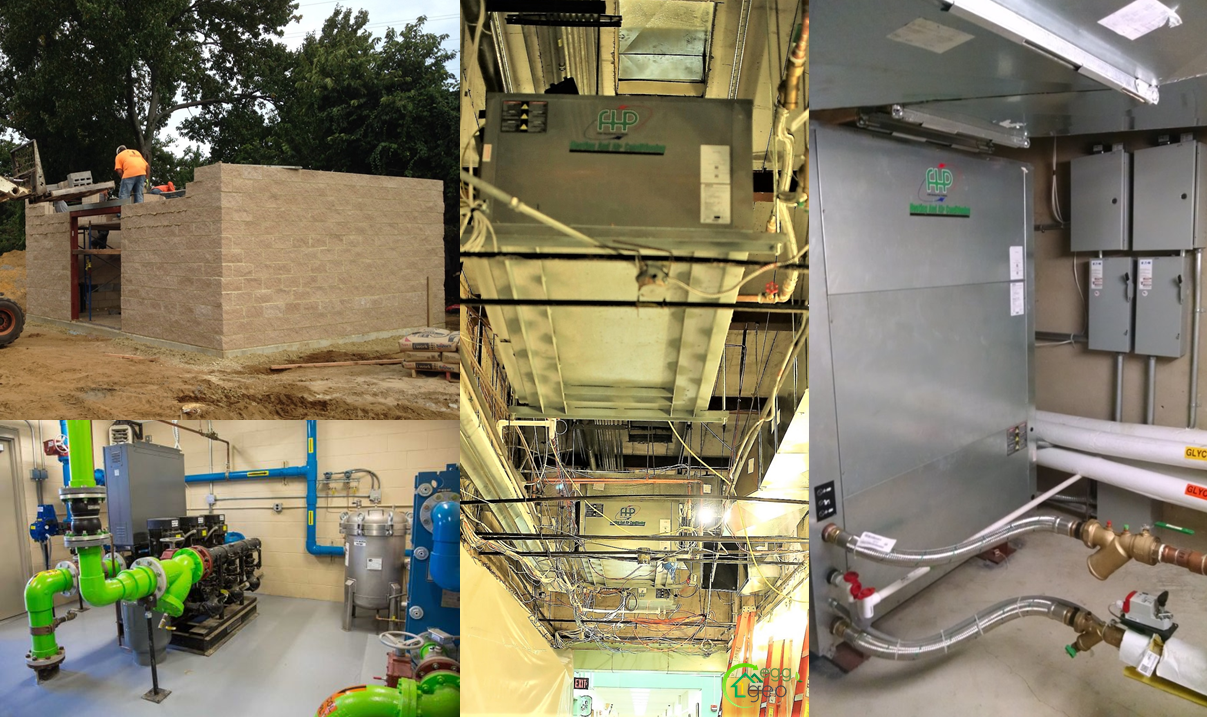 To help inform future decisions about the subsequent uses of water serving as a heat source and sink in the heat exchanger component of a geothermal heat pump system, the U.S. Department of Energy’s Oak Ridge National Laboratory (www.ornl.gov) — funded by American Water — performed an independent assessment of data characterizing the quality of water that had passed through a heat exchanger supporting multiple GHPs in a 40,000-square-foot school building.

ORNL researchers Ellen D. Smith and Xiaobing Liu reviewed the data and identified no conditions preventing the use of heat exchange outflow water for water supply.

Most of the United States and portions of the world have public drinking water supply lines. Any location that has city water lines can now take advantage of New York’s example and has the opportunity to institute a similar program.

With the four-year test complete and the “Evaluation of the Impacts of Heat Exchanger Operation on Quality of Water Used as Heat Source and Sink” report in from ORNL, Oneonta, N.Y., agreed to fund a study on a 2019 water main project along its Main St.

According to reports from Valley Stream and local authorities having jurisdiction (AHJs), the individual municipal water districts were free to use the energy in their water lines. It would be up to the local municipalities how they chose to keep their drinking water safe.

The standards are established. Consider a drinking fountain, a refrigerator with ice and water in the door, or a heat pump water heater. All these appliances have refrigeration circuits that safely change the temperature of water up or down

These appliances use a double-wall exchanger, which transfers heat from a refrigeration circuit to and from the potable water safely, along with other sensors as needed to meet code and drinking water standards.

The NY DOH Pushes Back

The New York Department of Health (DOH) has a regulation shared by Roger Sokol, director of the NY Division of Environmental Health Protection, in May 2019 that prohibits the introduction of potable water after heat exchange. He states that a direct cross-connection is a direct contradiction to 10 State Standards and contradicts the U.S. Environmental Protection Agency’s guidance document WSG 170.

Geoffrey Snyder, director of environmental health at Madison County Department of Health, notes that Part 8.10.2 of the 10 States Standards does not allow water used in conjunction with heat exchangers to be returned to the public water system. Perhaps someone should tell that to Toronto.

During previous conversations with the New York State Energy Research & Development Authority (NYSERDA), after having considered the evidence from the Valley Stream school project and the report from Oak Ridge National Laboratories, we understood that the individual municipalities chose to provide HVAC heat exchange from water mains.

However, after various email conversations with the NY DOH, it was indicated that this would jeopardize state funding for the project. This is a missed opportunity to encourage good practices. We need only get it to the right folks to help promote proper communication.

We began to investigate the possibility of using raw water, either from the freshwater reservoir or pumped from the ground before being treated into water treatment facility. Oneonta would take advantage of the potable water flow before it was processed and piped to the city.

Oneonta provided drawings showing a 10-inch line passing a few blocks away from the Fox Hospital and Nursing Home (see image). There is also a 10-inch raw water main running through the front lawn of the middle school.

NYSERDA’s Clean Heating and Cooling division wants to see projects such as the Oneonta’s go forward. NYSERDA representatives scheduled an April 26 meeting with the mayor and city officials to discuss how to continue this momentum.

During the meeting, we discussed several possibilities for using raw water, wastewater and variations of standard geothermal exchange systems. After a lively discussion about the possibility of thermal pollution, it was identified as not a real issue. Then we traveled to Troy, N.Y., to talk about similar district opportunities with its city officials.

After the meeting and having looked further into potable water thermal exchange, the city of Oneonta was told in May 2019 that the “use of potable water for heat exchange is not a NYSERDA decision. It’s totally the decision of the Department of Health and, to a lesser degree, the Department of Environmental Conservation. [The consultant and the city] really need to sit down with DOH and present the case, and hear from them directly. [It’s] strongly suggest the City of Oneonta schedule a meeting with DOH.”

It’s too late for the Oneonta’s Main Street project, at least this time around. We can help them to prepare for the next geothermal exchange opportunity.

What’s the reasoning? What about other potable water exchange systems?

Lack of communication and legislative difficulties are obstacles. It’s human nature to shy away from something that’s unknown and is going to take more work, even if it makes sense. I’ll share an article I wrote last November for Plumbing Engineer that included information on potable water and other thermal exchange practices: “The Water-Energy Nexus and Geothermal Systems,” http://bit.ly/2ATFM4y. It says, in part:

“In the master design of mixed-use communities, all facets of infrastructure must work as a single body with the purpose of facilitating interconnections of the systems. This includes thermal resources within any planned community, working as one toward the sharing of energy with any infrastructure systems within the community. A ‘community thermal utility’ is typically regulated and empowered to charge for BTUs moved back and forth between structures and systems (at a reduced rate) set forth by the planners.”

Nearly every community has enough water, wastewater and reclaimed water moving underneath it each day to provide for the fluid exchange needs for that community. Toronto does it with just three freshwater intakes. Valley Stream, N.Y.’s William L. Buck Elementary School did it with just a pair of saddle taps to the water main.

We have the means of heat transfer already in the ground, which can eliminate the need for much of the loop infrastructure. Tapping existing pipe infrastructure for thermal exchange helps to reduce the first cost well below that of single geothermal systems, and adds load sharing and diversity, significantly reducing energy consumption beyond stand-alone systems (look at what Stanford is doing). The water/energy utility can own the exchange facilities and sell the energy.

We will continue to work with the city of Oneonta, NYSERDA and the AHJs (such as the NY Department of Health). A knowledgeable entity that can help integrate all the utilities and AHJs into a symbiotic state is the key. It will move them out of silos and put them on playing fields of progress.

What can you do to help? Find out all you can about geothermal exchange and get your people trained. A great one-day course providing an overview and CEUs is available online from the International Ground Source Heat Pump Association: Introduction to Geothermal Systems Technology (https://bit.ly/35aKEPX).

Special thanks to Ellen D. Smith and Xiaobing Liu of ORNL for the report, “Evaluation of the Impacts of Heat Exchanger Operation on Quality of Water Used as Heat Source and Sink,” June 30, 2018. ORNL/TM-2017/382, https://bit.ly/30VHHPS.