Prefabricated Hydronic Panels: The Key to Higher Quality and Profit

While no means a new concept, radiant pioneer John Abularrage believes that prefab is underutilized and offers a number of important benefits.

The staff of Advanced Radiant Design, Stone Ridge, New York, has worked diligently through the years to bring near-perfection to the craft of hydronic panel prefabrication. An art form all its own, prefab “requires close attention to detail and a highly organized approach,” says owner John Abularrage.

According to Abularrage, prefabrication can save 50 percent or more in labor costs over on-site fabrication.

“Constructing panels in the shop provides a controlled and comfortable work environment with all the necessary tools at our disposal and eliminates the repetitive set up and breakdown on a daily basis usually required with field fabrication,” Abularrage says.

He notes that prefabbing hydronic panels is a bit like any manufacturing process.

“We’ve designed rather complex systems with care, to be built in controlled conditions where all of the parts and pieces are at our fingertips, not unlike any modern manufacturing process,” he explains. “In our shop, there are none of the disadvantages of jobsite construction that can include high heat, extreme cold, jobsite noise or chaos, lack of electricity or an acetylene gas tank that runs out at exactly the worst time.”

According to Abularrage, prefabrication can reduce travel time and expense in particular on long-distance jobs. It also permits unrestricted work hours, unlike the time constrictions, which may be present at jobsites.

In his opinion, there’s no doubt that the quality of a preassembled panel is higher than what can be achieved in the field.

“Actually, much higher,” Abularrage emphasizes. “When we prepare to build panels at the shop, we control everything, from the height of the work platform to even the music we listen to. It’s more like a hospital operating room. There are no distractions, and everything we need is available. Forceps, please!”

At times, ARD has as many as a half-dozen control panels prefabricated in its shop, waiting for the appropriate time for installation. This solves the problem created by the ‘hurry up n’ wait’ jobs that would otherwise be impossible to complete in a timely manner.

According to Abularrage, while prefabrication may not be right for every situation, it can be an important key to higher quality and profit for every contractor.

“Building a successful business happens through professional management of the work we do,” Abularrage says. “From the people we groom for greater and greater responsibility, to the way we interact with customers, and even to details such as how we hone our skills, and our mechanical product, to an ever-finer edge.” 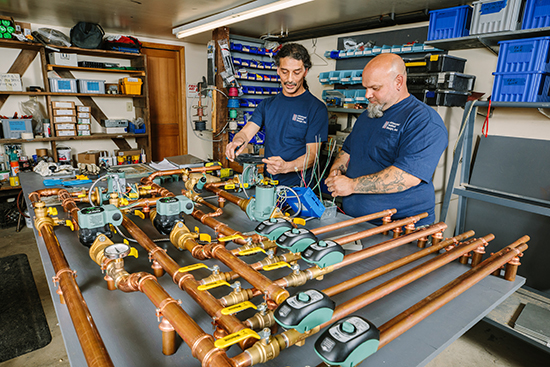 The process of prefabrication always begins with accurate measurement of the space available for the prefabricated equipment. Careful jobsite measurements of the mechanical space evolve into a CAD drawing. Only then can real calculations be made to a custom panel’s size and capability.

“With completion of a CAD drawing, decisions about the alignment of valves and components are made,” he explains. “While this has little effect on system performance, it adds to the overall cohesiveness of the finished project without adding significant time to the fabrication.”

This visually important refinement communicates a high level of craftsmanship and professionalism.

“Don’t dismiss the value of this as merely ‘mechanical vanity,’” Abularrage warns. “There’s real advantage to a wow factor. I’ve had seasoned jobsite foremen marvel at the work, telling my guys that they’ve never seen mechanical systems as nicely constructed as ours. Guess who they refer other customers to?”

Prefabrication is by no means a new concept. However, Abularrage believes that it’s underutilized and offers a number of important benefits.

“Training is a less evident benefit of prefabrication,” he says “Mentoring an apprentice under shop conditions with real-world applications is priceless. It acts as a bridge between the classroom and the field. I’ve found that the ability to train from theory, through development, to fabrication, and finally to the installation of a control panel to be most effective.”

The prefabrication process is best accomplished with continuity of responsibility. If the same person is performing the site survey, fabrication and installation, any conflicts can be more readily identified and resolved. Coordination and communications with related trades is also improved.

“The last thing we want to happen is to deliver a prefabricated control panel to a job site that’s larger than the available space,” Abularrage adds.

The CAD drawings helps avoid that problem since they include accurate measurements of floor and wall space available for all system components, including control panels, boilers, tanks, and supply and return piping that will connect to the control panel.

“These drawings must include any equipment from other trades that needs to be in the mechanical room,” he adds.

Access for servicing the equipment is also critical and needs to be documented in the drawing as well.

Starting with an accurate piping schematic, the basic layout of the fittings and components can begin. There are many variations of the layout, which can affect the overall dimensions of the panel. Sequencing either vertically or horizontally can make a tremendous difference in dimensions in either direction.

“It always amazes me that regardless of how much space is available,” Abularrage adds, “it so often comes down to a matter of inches in order to make a control panel fit in the allotted space.”

When laying out the components, consideration must be given to the hangers that will support the system. This sometimes requires adding piping length between components to accommodate the hangers. Once the layout is decided and confirmed, actual assembly can begin. 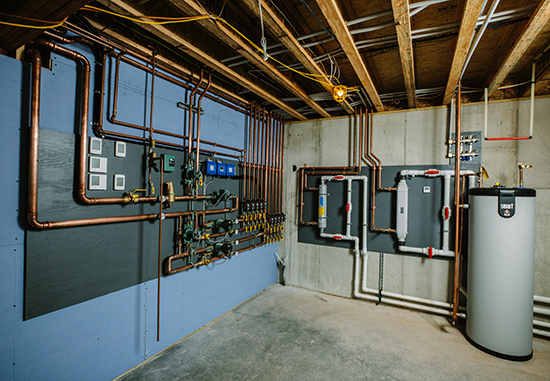 According to Abularrage, there are a few well-designed and manufactured components that have for many years been on the A-list for prefabricated panel construction.

“Our A-list includes Taco’s Zone Sentry zone valve and the 007e circulator,” Abularrage says. “The Zone Sentrys provide reliability. We’ve never had to replace or service any of them, but the heads snap on and off of the valve body in a second, which is nice during fabrication. We’ve used them steadily since they entered the market. We also like that the light on top provides an indication of power to the unit, and that a simple twist of the manual over-ride can open or close the valve.”

Abularrage says that they were quick to standardize on Taco’s 007e, a high-efficiency ECM circulator that, he says, “contributes nicely to overall system efficiency.”

For control of entire hydronic systems, Abularrage has used tekmar controls for more than 25 years.

“Though our control strategy, with panels, remains essentially the same, the ever-improving technology refines the process and system operation and efficiency,” he explains. “Here’s where tekmar’s fully-integrated point-to-point wiring and indoor-temperature feedback improve efficiency by helping to keep system temperatures as low as possible. Meanwhile, the 007e is designed to keep system speed as low as possible, yet while satisfying the load.”

Maintaining commitment to a few reputable companies and their technologies means that Abularrage’s crew knows and are familiar with all of the older and newer products.

“The manufacturers reciprocate through their commitment to us, such as if we have questions, or needs – we feel prioritized, he adds. “That’s valuable.”

Abularrage's first experience with engineered, prefabricated systems goes back to the late-1970s in the solar industry. The technique has since become a fundamental part of the ARD business model.

“The fundamentals of primary/secondary piping remain the same, and they still look exactly the same, except for the change to press fittings, and components used – those have modernized through the years,” he adds.

ARD has been producing the same single- and dual-temp control panels for more than 25 years.

“Standard prefab panels – those with little or no variation – apply to a majority of our radiant heat jobs.” Abularrage explains. “They give us the quality control we need, yet allow us to be competitive with pricing, too.”

He appreciates the many advantages offered by panel prefabrication.

“Among them, greater profitability, but more importantly, consistency and continuity that leads to very high system reliability and – for routine maintenance, or when challenges may arise – much greater serviceability and efficient troubleshooting,” he says. “Another advantage is the ability of controls that can be tailored to a particular application using the same standard piping arrangements.”

Anyone who’s impressed with the finished product will also add that all-important word-of-mouth element to your sales efforts.

While prefabrication isn’t for every situation, it can be an important key to higher quality and profit for every contractor.

Almost every job offers the opportunity to prefabricate some aspect. If contractors haven’t yet tried prefabrication, Abularrage recommends starting with a simple subsystem that they’ve typically fabricated in the field.

“Take your time,” he adds. “As you develop the shop techniques, the efficiency will follow. The rewards will offset the investment in the learning curve many times over.”