Project improves safety to the environment from the potential for leaking tanks.

As a refresher, there are 20 cylindrically shaped, vertical tanks, located 100 or more feet below the Red Hill above Pearl Harbor. Each tank has a 300,000-barrel capacity for a total capacity in those 20 tanks of 6 million barrels (252 million gallons). Each tank is 250 feet in height with a 100-foot diameter. The tanks are currently used for the storage of JP-5, JP-8, and marine diesel fuels. 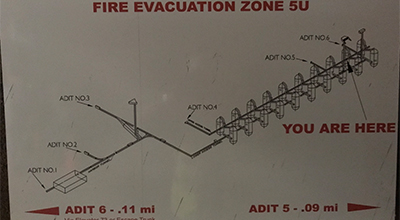 The tank construction consists of concrete lined walls faced with a quarter-inch steel plate. The 20 tanks are aligned in pairs on either side of upper and lower access tunnels. The upper access tunnel connects to each tank about one-third the way to the top.

There are more than seven miles of tunnels in the Red Hill Tunnel Complex. POL pipelines run from the tanks along the lower access tunnel to the harbor access tunnel down to the main fuel pump house at Adit 1, which is located at Pearl Harbor.

As part of a major improvement program to improve safety to the environment from the potential for leaking tanks, there was a large project to improve the fire safety in the tunnel areas.

The contracting officer for the fire suppression system upgrade is the Naval Facilities Engineering Command Pacific. The Red Hill facilities are under the command of the Defense Logistics Agency. The design was by Insynergy Engineering of Honolulu, Hawaii.

The prime construction contractor for the project, Hensel Phelps, used our firm, Coffman Engineers Honolulu Fire Protection Group, as the Quality Control Fire Protection Engineers for the project. The QCFPE is responsible for the review and approval of all fire protection submittals for the contractor, construction site inspections, and supporting the acceptance testing and inspections for this system. Also, the QCFPE assists with the coordination of various system interfaces and supports the contractor with the RFI process.

The water supply consists of two 250,000-gallon aboveground water storage tanks, one existing and one new, constructed as part of the fire protection upgrade project. The tanks are interconnected and have bottom elevations at approximately 570 feet. There is approximately 1,500 feet of 12-inch water line from these tanks supplying the fire pump system located in the AFFF Storage and Fire Pump Building located at elevation 260 feet.

The fire pump discharges into 12-inch underground fire mains routed along access roads to various entry points (adits) to the tunnel system. From the pumphouse, a 12-inch fire main runs approximately 200 feet to an upper tunnel entrance at Adit 6. A branch of the 12-inch underground main continues approximately 600 feet where a branch enters the Upper Tunnel at Adit 5. It continues another 1,800 feet where a branch enters the Upper Tunnel at Adit 4. The underground main then continues as an 8-inch main and runs along the access road another 7,000 feet to the Lower Tunnel entrance at Adit 3. A fire main provided along the entire length of the Upper Tunnel loops into the outside fire main at the connections at Adits 4, 5 and 6. Near the top end of the Upper Tunnel at Tanks 19 and 20, an 8-inch fire main drops down 200 feet to the lower tunnel fire main in a shaft adjacent to one of the elevators connecting the upper and lower tunnels. The 8-inch main then runs down the Lower Tunnel where it connects to the fire main that entered Adit 3.

The lower tunnel area where the tanks are located is provided with AFFF foam sprinkler systems. The systems are preaction systems with closed-head sprinklers. There is a total of five AFFF system zones, each with a preaction AFFF sprinkler system riser. Each riser covers an approximate area of 10,000 square feet. Each preaction AFFF zone is isolated from one another by fire barriers.

The system design criteria are: 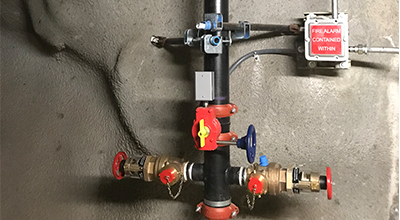 The preaction system piping is supervised for leaks using nitrogen. A nitrogen generator and nitrogen storage system are provided at the AFFF Storage and Fire Pump Building. From this point nitrogen is piped to each of the five preaction AFFF systems.

A standpipe system provides hose valve stations consisting of two 21/2 pressure-regulating hose valves distributed along the portions of the upper and lower tunnel where the tanks are located. Each hose valve is set to deliver 250 gpm at 100 psi. All standpipe hose valves are designed to deliver water only.

The FA/MNS covers the entire tunnel system upper and lower tunnel. Rated-compensated heat detection is provided throughout the upper and low tunnel systems. Detectors spaced on approximate 30 feet spacing. Detectors are also located in ladder passages leading from the main upper tunnel to the exterior top of each of the 20 fuel tanks, and in the each of the tank galleries in the lower tunnel.

As noted, triple-infrared flame detectors are provided for automatic activation of preaction AFFF valves in the lower tunnel. Manual fire alarm stations are also distributed along the tunnels at several locations. 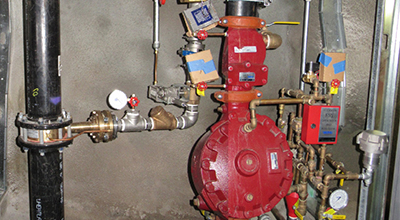 At the lower tunnel fire barriers, with a two-hour resistance rating and automatic-closing fire doors with a 90-minute fire protection rating, provide separation for each AFFF sprinkler zone.  There is also door on the lower level just downstream of the tanks which is designed to stand up to a major liquid leak from one of the tanks upstream.

A 14-inch drainage pipe collects discharged foam solution from a sump located in the lower tunnel downstream of the fuel tanks and pipes it to a 153,000-gallon capacity AFFF retention tank near Adit 3. l