A hundred feet beneath the hills above Pearl Harbor lies one of the truly amazing engineering achievements of our time. A Naval fuel supply depot with six million barrels of fuel.

In this series of columns, I will attempt to describe this amazing facility and the fire protection features it contains.

Let us start with a very brief history of the Navy in Hawaii.

Shortly after being appointed to the position of Assistant Secretary of the Navy in 1897, Theodore Roosevelt in a letter to Captain Alfred Mahan, a top Naval expert of the time, wrote:

“If I had my way, we would annex those [Hawaiian] islands tomorrow. If that is impossible, I would establish a protectorate over them. I believe we should build the Nicaraguan canal at once, and in the meantime, that we should build a dozen new battleships, half of them on the Pacific Coast… I am fully alive to the danger from Japan, and I know that it is idle to rely on any sentimental good will towards us.” 1

Driven by the concern of Japanese expansion in the Pacific, the interest of other nations in the Hawaiian Islands, and the local business leaders who conspired to overthrow the Hawaiian monarchy in 1893 (with the support of U.S. troops); the U.S. annexed Hawaii in 1898.

In the late 1800s, Pearl Harbor served as a coaling station for U.S. Navy ships. The U.S. Navy began expanding its presence in Pearl Harbor in 1899. Known then as Naval Station, Hawaii there was a continuing development of facilities at the site to accommodate greater numbers of naval vessels and the services they required.

In 1908, the Pearl Harbor Naval Shipyard was officially established.

In 1933, concern over Japanese expansionism prompted the Navy to stage a mock Japanese attack on Pearl Harbor to evaluate its defenses. The exercise demonstrated that U.S. defenses were not adequate. Apparently, the lesson was not learned.

Concerned about the vulnerability of the Navy’s fuel supply in the islands to an aerial attack, the Navy embarked on plans for an underground fuel storage facility.

Construction of the Red Hill Tunnel Complex began on Dec. 26, 1940 and was completed in September 1943. Sixteen workers died during the construction. Ironically, the Dec. 7, 1941 attack on Pearl Harbor, while momentarily crippling the U.S. Pacific Fleet, did little damage to aboveground fuel storage.

The fuel storage tanks at Red Hill lies beneath 100 feet or more of rock. In 1940, the land above was originally site of sugar cane fields. Now, there is a neighborhood of homes sitting atop the facility.

There are 20 cylindrically shaped, vertical tanks. Each tank has a 300,000-barrel capacity for a total capacity of the 20 tanks of 6 million barrels (252 million gallons). Each tank is 250 feet in height with a 100 feet diameter. 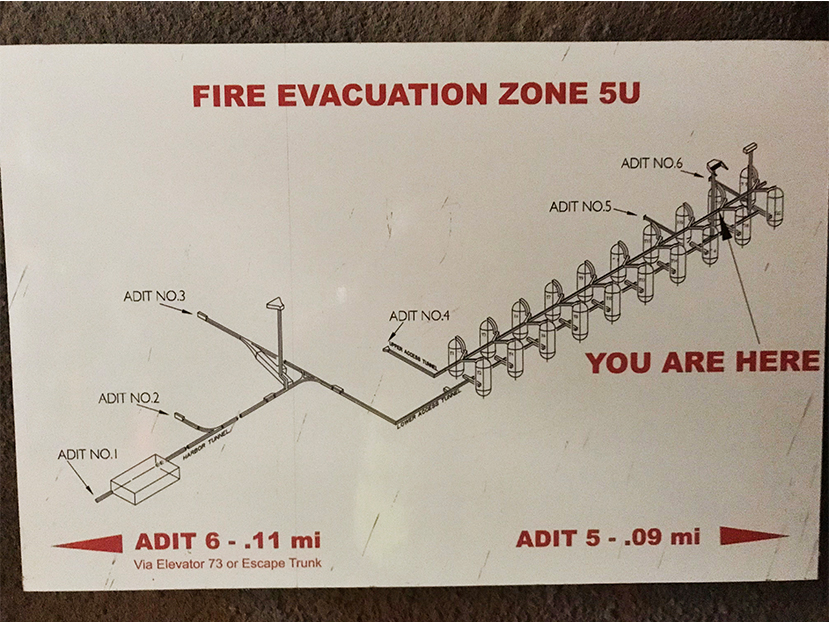 The tank construction consists of concrete lined walls faced with 1/4-inch steel plate. The 20 tanks are aligned in pairs on either side of upper and lower access tunnels (see Photo 1). 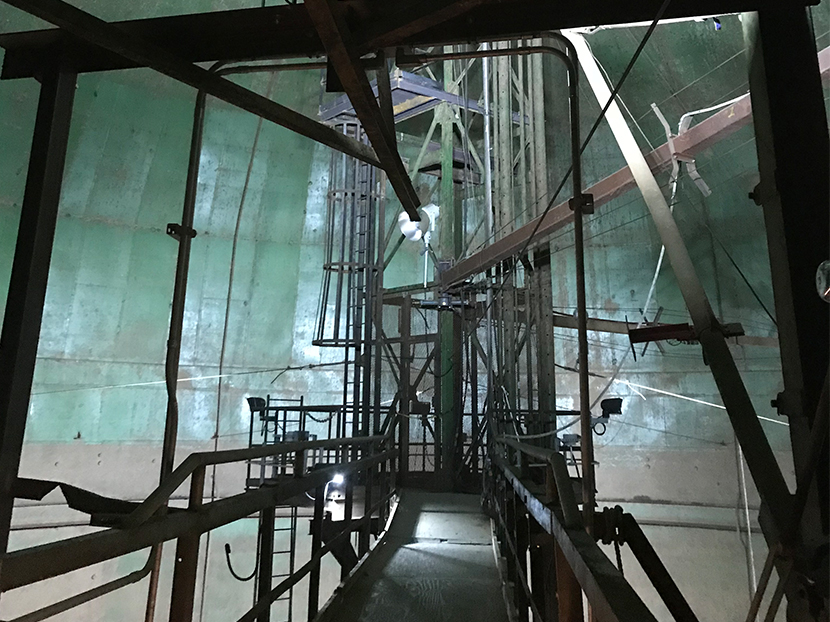 The upper access tunnel connects to each tank about 1/3 the way to the top. Photo 2 depicts the suspended walkway into one of the tanks from the upper tunnel. 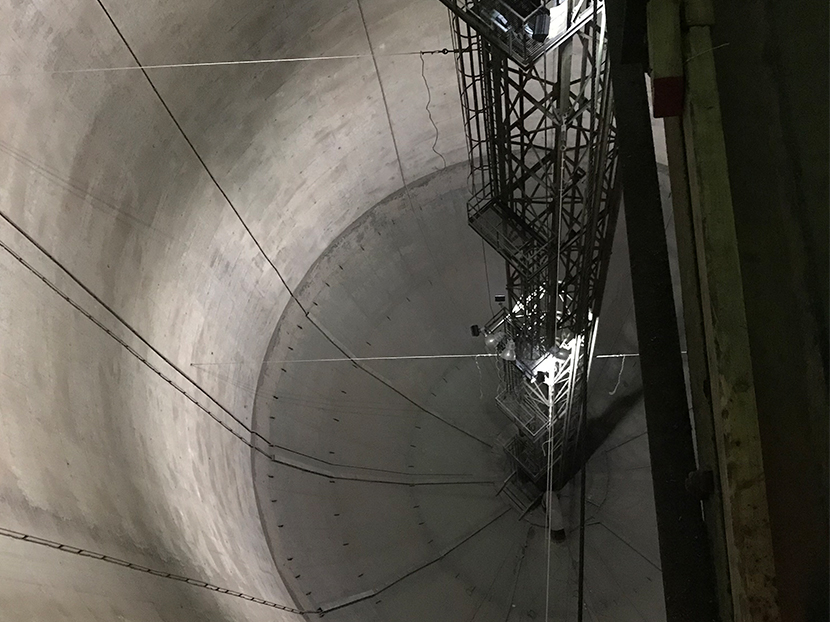 Photo 3 is a photo looking toward the bottom of the tank from the suspended walkway.

The tanks are currently used for the storage of JP-5, JP-8, and marine diesel fuels.

There are more than 7 miles of tunnels in the Red Hill Tunnel Complex. POL pipelines run from the tanks along the lower access tunnel to the harbor access tunnel down to the main fuel pump house at Adit 1, which is located at Pearl Harbor. Near the junction between the lower access tunnel and the harbor tunnel, the Navy operates a water pumping station, where each day millions of gallons of fresh water is pumped out of the aquifer to serve the water needs of the surrounding area. It seems a bit incongruous that a major freshwater pumping station is located in the same tunnel system a few though feet downstream of 252 million gallons of fuel.

Especially since, in recent years the facility has been plagued by fuel leaks. The Navy has been under major pressure from government and private environmental groups to deal with the problem. It has embarked on extensive programs to clean-up the site and to ensure that future leaks do not occur. Along with this effort to correct environmental problems, came projects to correct safety and fire protection deficiencies.

In spite of the recent problems, the complex is still an amazing engineering achievement. In 1995, the American Society of Civil Engineers designated Red Hill as a National Historic Civil Engineering Landmark.

My first visit to the Red Hill tunnel complex was in 1979. At that time, the four tanks at the upper end of the complex were used for the storage of JP-4, a high flammable jet fuel. The tunnels serving these four tanks were separated from the remainder of the tunnel system by “fire-rated construction.” The tunnel portions serving the four tanks were protected by a manually activated total flooding carbon dioxide fire extinguishing system. Talk about a scary situation. The carbon dioxide system was a Cardox low pressure system using a large refrigerated storage tank. The system once activated had a time delay during which a pre-evacuation alarm occurred. The pre-evacuation alarm was the odor from a crushed glass bulb that contained mentholated spirits. My thought on learning about this was if you ever smelled the menthol it was time to bend over and kiss your okole goodbye.

The old Cardox system has long been gone, but the concern for fire protection and life safety has not. That’s a subject for the next column.

For more detail on the construction of the tunnel complex, visit bit.do/RedHillFuelStorageTanks.

SFPE Notes: Hawaii: The 12th International Conference on Performance-Based Codes and Fire Safety Design will be held in Honolulu, Oahu, April 23–27, 2018. The conference will cover current and future trends in building and fire regulatory systems, the contribution of fire protection engineers to innovative design solutions, and the latest developments in fire modeling and risk assessment. Registration is open. Go to www.sfpe.org to register.