… also the stupidest idea of all time as shoppers can’t wait to buy bottles of ‘raw’ water – untreated, unfiltered, unsterilized and often out of stock – all for $15 a gallon.

Never being much to play computer games or card games let alone a card game based on a computer game, I’d been unaware of The Oregon Trail until a Facebook friend posted the image you see accompanying this column.

As it turns out, The Oregon Trail is one of the first computer games developed by a history teacher in 1971 to educate children in his own classroom about the brutal realities of 19th century pioneer life. Players guided a Conestoga wagon filled with settlers circa 1848 along the actual 2,170-mile trail that once went from Independence, Missouri to Oregon’s Willamette Valley. 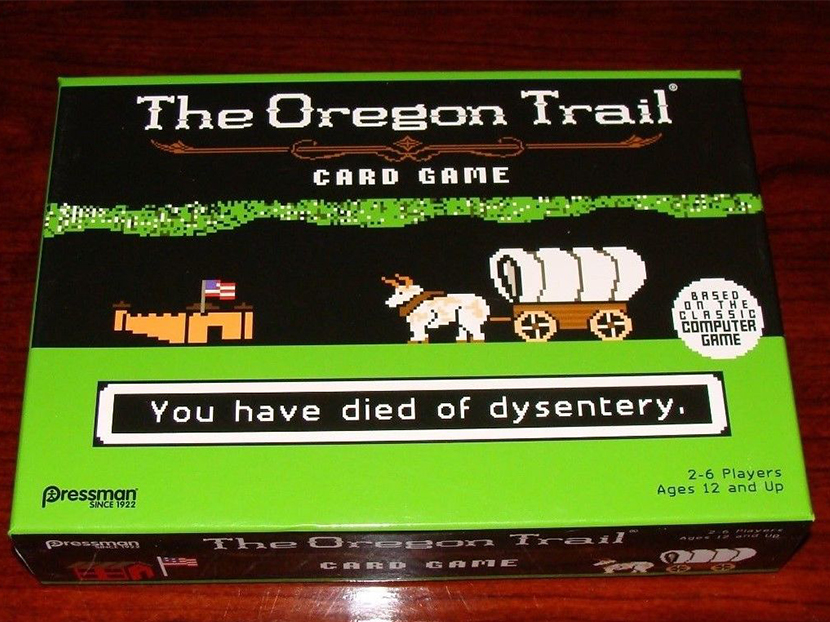 Throughout the course of the game, players had to carefully consider their actions since anyone could fall ill and die from a variety of causes, such as measles, snakebites, starvation or just plain exhaustion.

While the game has gone on to sell 65 million copies worldwide in one computer iteration or another, a fan favorite death remains, “You have died of dysentery.” Today, you can buy tee-shirts and coffee mugs embellished with the catchphrase.

I’m guessing, however, nobody shopping at San Francisco’s Rainbow Grocery ever grew up playing the game. According to a trends article published in The New York Times, shoppers can’t wait to pay $36.99 ($14.99 per refill) to take a sip from a 2.5-gallon container of “raw water.”

One of the grocery managers describes the water, marketed by an Oregon startup called Live Water, as having a “vaguely mild sweetness, a nice smooth mouth feel, nothing that overwhelms the flavor profile.”

Raw water proponents say their au naturel hydrogen and oxygen contains healthy and natural minerals that get stripped out when tap water or bottled water is filtered and treated. Minerals, for example, like arsenic. It’s 100 percent natural. And it can kill you through organ failure and internal bleeding.

If that sounds like too much of a price to pay for water that might, at best, make you seriously ill, head down to San Diego for fluoride-free, chlorine-free and “mineral electrolyte alkaline” drinking water. A gallon will set you back only $2.5O. Trisha Kuhlmey, owner of Liquid Eden, says she sells about 900 gallons a day with sales doubling every year as the “water consciousness movement” grows.

I’m not sure about Liquid Eden’s water, but Live Water’s bottles come with an expiration date since owner Mukhande Singh (born Christopher Sandborn) told the newspaper that “real water” only stays fresh “within one lunar cycle of delivery.” If it sits too long, Singh says it will turn green.

“People don’t realize that because all their water’s dead,” he says, “they never see it turn green.”

Plus, it’s not just raw water in bottles. Plenty of other people simply want to get off the grid just like so many install solar panels to generate their own electricity. In this case, homeowners can install a system of panels that extract water directly from the atmosphere, storing it for later consumption. Zero Mass Water, which has raised $24 million in venture capital, sells such a system for $4,500, including installation.

Meanwhile a podcaster who prefers the term “unprocessed water” over raw water since it brings to mind raw sewage started a website to help people find the closest spring. Using the site, I found a couple of springs right in Chicago including one spot less than a 20-minute drive from O’Hare International Airport, and another even closer to the airport labeled no less than the “Fountain of Youth,” a hand pump in a suburban forest preserve the likes of which I had thought had all been padlocked decades ago.

I’m pretty sure we can all agree on pure water. Bottled water, even if it’s glorified tap water, comes with a certain level of guarantee of safety. Most of us consuming tap or private well water can install reverse osmosis filtration for an added measure of safety. (Most bottled water is, in fact, tap water that’s gone through an RO system.) In fact, if you really want to drink the purest water of all, pick up a gallon of distilled water at Walgreens for just a couple of bucks.

And it’s not that the jury is still out on raw or unprocessed water. It’s that the jury has already rendered the verdict, but true believers of “off the grid” water aren’t interested in listening to the rendering.

“Almost everything conceivable that can make you sick can be found in water,” food-safety expert and lawyer Bill Marler told Business Insider regarding the article.

In much the same as the movement against vaccines, the movement toward raw water is another example of how false witness has overwhelmed facts. Science isn’t to be trusted. Raw water, after all, is all natural. Modern water treatment is the culprit. Things were better before water was processed like a pack of Twinkies. Let’s Make Water Great Again.

And so, while 780 million people around the world actually lack access to safe water, now people in this country who should know better, are willing to pay to join them.

This is the true cognitive bias of our time.

Overall in the U.S., outbreaks from water-associated diseases are low. A Center for Disease Control and Prevention report released in last November calculated 42 drinking water–associated outbreaks in 2013-14, which caused 1,006 cases of illness, 124 hospitalizations, and 13 deaths. (The majority of the cases, and all of the deaths, were linked to Legionnaire’s disease caught through inhaling Legionella bacteria.)

Modern methods of water treatment and sanitation have made it this low.

Those who do want to quench their thirsts with a glass of raw and unprocessed water do make a point when they raise concerns about public water passing through lead pipe and aging infrastructure before it gets to the tap. But that’s an argument for reinvesting and improving the country’s pipelines.

Let’s hope this trend, if it even is a trend, evaporates.