Free Subscription
Home » Can You Build This for Me?
Letter from the Editor

Can You Build This for Me?

It’s time to encourage girls to embrace STEM through fun.

Earlier this week, I was visiting with my twin nieces who are getting ready to turn five in a couple of weeks. They’d gone on vacation to visit their grandparents in California and came back home with a box of new toys.

For about an hour or so, Gwyneth (older by 2 minutes) repeatedly asked me to come upstairs and see her new toys. I finally caved and made my way up for what I was sure would be a 20-minute explanation of what makes the latest Doc McStuffins gadget the greatest invention since, well, since the last one she received.

To my surprise, she led me to a box on the floor that read “Engineering & Design Building Set.” Then she turned to look at me and ask, “Can you build it for me?”

My first instinct was to get on the floor and put the entire playground together for them, but then I thought, “that would kinda defeat the purpose, wouldn’t it?” Instead, I sat down next to her and said, “Why don’t we build it together?”

No sooner did Charlize (younger by 2 mins, but don’t tell her that!) come into the room and say, “We can’t do it, it’s too hard!”

I went into “Super Auntie” mode and responded, “There is no such thing as too hard, you just need to give it a try!”

So, we sat there for about an hour, piecing together the parts of just a portion of the entire playground. There were a few times I wanted to jump in and build it for them, but I realized that they wouldn’t really benefit from that. 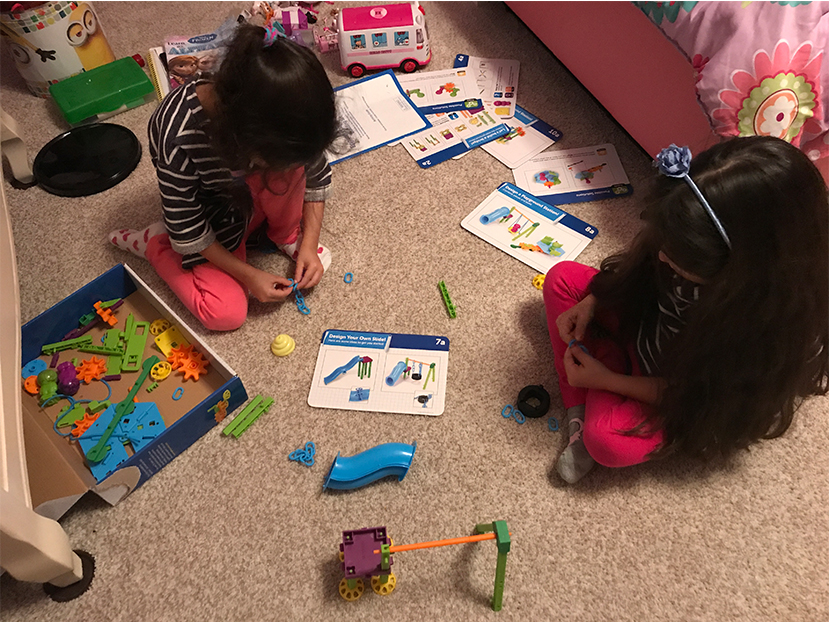 It struck me that perhaps both Gwynie and Charli, though full of imagination they may be, have become accustomed to playing with toys that are already complete. And this new toy, with an image of a completed playground on the box, threw them for a loop when they opened it and discovered they had to be the engineers who put it together. And if they wanted, they can use four rings to hold the swing up, or five, or six. They had creative control, and that stumped them.

So, I did what any reasonable person would do. I stopped building. I stood up and said, “I helped you with the swing and slide, the rest is up to you! Follow the instructions, ask mom and dad questions, but you have to finish it.”

I’ll keep you posted on the progress of the playground.

There has been a lot of discussion lately about toys that encourage children toward career paths that embrace Science, Technology, Engineering and Math (STEM), especially for little girls.

There also has been a lot of discussion lately about the shortage of tradespeople in the industry. Encouraging children to be curious and learn with both their minds and hands, is equally important.

I’m going to be a little biased and say that this is especially true for young girls.

Men in engineering jobs far outnumber women. In fact, less than 10 percent of the American Society of Plumbing Engineer’s membership is comprised of women.

I recently sat with the Women of ASPE at the 2017 ASPE Technical Symposium and asked what the group is doing to effect change in the organization. This month’s featured women story focuses on their success to date, and what they plan on doing for the coming year. It’s a great group, doing great work to advance women in the plumbing engineering industry. You can read more about Women of ASPE here.

As for encouraging the young girls in your life, a recent focus of many toy companies has been to specifically create toys that are appealing to girls, so they can have a vested interest in STEM careers at an early age. Take a look at the Top 10 Best STEM Toys for Girls 2017 | Coding, Engineering, Science.

As always, my goal is to talk to leading women in the industry each month and share their stories, thoughts and insights. If you know a woman, or are a woman who should be featured, let me know.

T&S Is Helping Stop The Spread Of Germs