Heat metering has become more important to the users of renewable and high efficiency heating systems. It provides verification that a solar (or any alternative) heating system is working properly, proof that conventional fuel sources are being offset, and that the expected fuel savings are real. When solar heat savings is accurately metered, it can allow solar heat to be included in renewable energy credits and also allows the reduction of carbon emissions to be quantified.

Both government and solar industry authorities are working on standards that will allow metered solar heat to be given the proper credit for these very tangible benefits. Of course, as the owner of the system watches the meter from day to day, the constant proof of performance provides a confidence in the technology that was never available in the past. 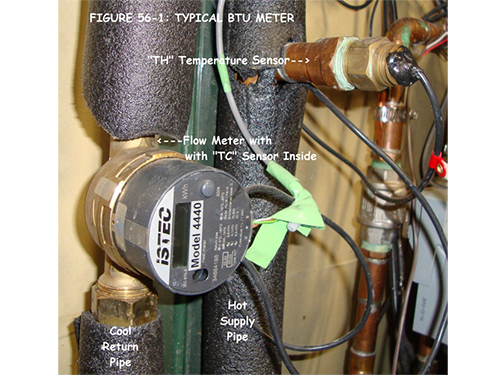 Taking water at room temperature as an example, its specific heat capacity is 1 BTU per pound per degree (F) rise in temperature. In fact, this is the definition of the British Thermal Unit (BTU). A proper BTU meter takes data from the flow meter and the two temperatures and then calculates the thermal energy based on these and other factors, taking into account the actual heat capacity of the fluid and its density and physical properties at the measured temperatures.

The BTU is such an anachronism these days that even the British no longer use it, favoring the watt or the joule instead (e.g. 1 kilowatt-hour = 3412 BTUs). But the definition of a BTU is so thoroughly compatible with hydronic heating principles that it is hard to give it up here in the metrically reluctant U.S.

Typically, when metering is required for multiple heat sources and multiple heat loads, a BTU meter is cut into the return pipe on each heating loop. This involves mounting a flow meter in series with the flow in each loop, along with a TH on the supply pipe and a TC on the return pipe.

Figure 56-1 shows a photo example of one of the BTU meters installed in the SolarLogic heating lab. When we first constructed our heating lab, we installed over half a dozen BTU meters like this on our hydronic plumbing so that we could meter the boiler, the solar, the heat storage, the DHW, the radiant floor, the baseboards, the ice melt and the spa separately from each other. One device with one meter is the most common way to measure heat energy.

Some solar differential temperature (DT) controllers come with an optional flow meter connection so that a BTU meter function can be activated within the controller when a flow meter is connected. These have been available on solar water heater DT controllers for a number of years now, and are used to display the heat available from the collectors.

For example, the iSolar Plus, BX and MX-LTE, available from Caleffi Solar, provide a connection for a flow meter and has the capability to display heat quantity measurements.

The useful heat supplied or consumed by a solar combisystem can best be measured on its way from a heat source, or to a heat load. In the SolarLogic laboratory, we originally placed a BTU meter on every source and every load. But over time, as we developed our primary/secondary piping standards, we arrived at a way to measure all the major heating components with a single flow meter.

1. The heat provided to and from every secondary loop is provided sequentially as heat flows down the primary pipe from one pair of secondary tees to the next.

2. Heat flow to or from all the secondary loops can be measured with just one flow meter located strategically in the primary loop pipe.

The piping diagram in Figure 56-2 illustrates this concept, showing a solar combisystem connected with a primary loop that has four secondary loops in addition to the solar collector loop. If we were to use conventional BTU meters to measure the heat flow in and out of each of these five loops  , it would require five flow meters and 10 temperature sensors. But in Figure 56-2, you can see how we can now use only one flow meter (F) and five temperature sensors to do all the same heat-metering measurements. 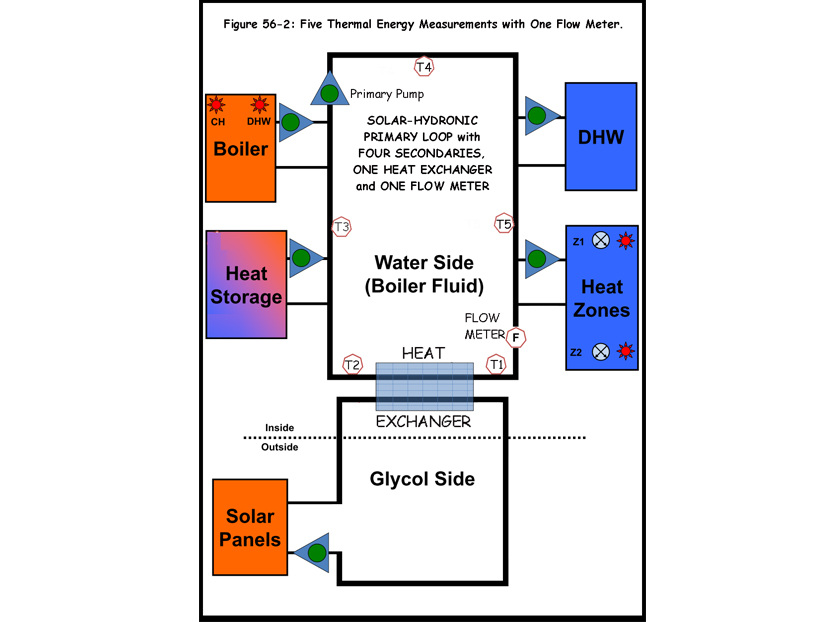 In this primary loop configuration, the flow of fluid through the water side of the solar heat exchanger is driven by the primary pump. This pump-flow is identical to the flow rate passing by each pair of ‘closely spaced tees’ feeding the secondary loops. So, a constant primary pump flow only needs to be measured once, and the BTU energy supplied to or from each secondary can be determined by looking at the temperature difference across each pair of tees.

For example, the heat coming out of the boiler is determined from the temperature rise from T3 to T4. The heat delivered to the DHW tank can be calculated by looking at the temperature drop from T4 to T5. With five temperature sensors, five separate heat flow measurements can be made depending on which pair of sensors you look at. In the case of non-constant primary pump flow, the flow sensor (F) can be monitored to provide continuous heat flow measurements, moment to moment as primary loop flow changes.

When the temperature difference is negative, the resulting BTU calculation will also be negative. This indicates that the flow of heat has reversed direction. This is how we can tell when cooling is being accomplished rather than heating. So, if T2 minus T1 is positive, it means heat is flowing into the primary loop from the solar collectors. If T2 minus T1 is negative, it means heat is being pulled out of the primary loop and rejected to the (cooler) solar panels. This might happen when heat is being dumped from the storage tanks during a period of controlled overheating or during summer night sky radiant cooling (NSRC) mode. Also, this is how you can tell whether solar heat is going into the heat storage tank or going out using T3 and T2.

When we developed the Solar Logic Integrated Control (SLIC) system, this single-flow-meter capability was built in from the very beginning. It uses the primary loop advantage when metering all the heat sources and loads under its control. When a single flow meter is connected to the SLIC, it calculates and displays the heat energy flowing in and out of every secondary loop that has a pair of temperature sensors installed. Using built-in software, any pair of temperature sensors located on the primary loop can be used as the TC and TH measurements to calculate a BTU value around the primary loop. Figure 56-3 shows a typical primary loop installation of a single flow meter in just such a system. The Grundfos Vortex Flow Sensor is seen in the photo, which is a solid-state device with no moving parts.

There are now scores of solar, alternative and renewable hydronic heating (and cooling) systems around the northern hemisphere that meter their heat energy in this way. We have found that it serves a similar purpose as the watt-hour meter on your electric service by displaying heat energy collected, consumed and delivered by hour, day, month or year. 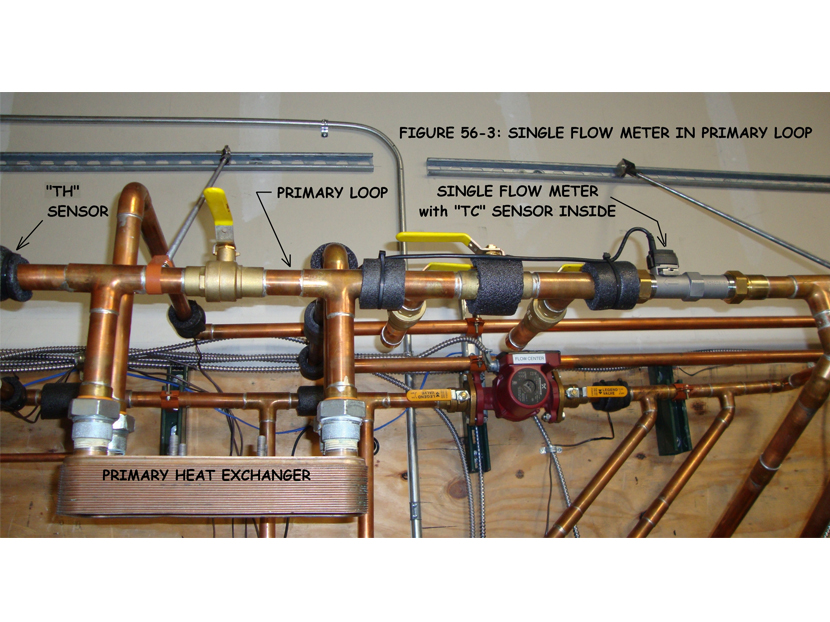 Table of contents for the past 6 years