Sometimes there is more to the problem than what meets the eye.

Last month, I talked about accepting a job that had challenges. I thought perhaps, that I had finally found a solution. But the goblins came back.

“Um, yeah. You were just here a month ago and got my boiler running.”

“Oh, yes!” I replied, “How is everything working?”

“Well, the boiler is running, but I have no hot water.”

“Okay, I’ll be right out to get it taken care of.”

This system is quickly becoming the bane of my existence. Nonetheless, I arrived at the job with a cheerful smile, ready to tackle whatever was thrown my way. I grabbed my backpack full of tools and headed into the barn to start troubleshooting when the farmer suddenly appeared. We exchanged cordials and chatted briefly. The conversation was often interrupted by his jovial laugh; this guy finds humor in everything regardless of the circumstances.

“No,” he replied. “And this one is remote radiant manifold; the pipes stay hot all the time. Even in the summer.”

“That shouldn’t happen,” I said.

Taking some encouragement from the fact that I agreed with him, he continued, “The air handler keeps blowing warm air in the middle of the summer. We shut off these two valves; that fixed it with a somewhat smug air.”

“And the boiler just keeps running and running,” he went on.

“Okay,” I replied. “Let me see what I can figure out with this hot water situation, and then I will investigate the other things you pointed out.”

“Sounds good,” he said, as he walked off with a pleased look on his face. He was still inwardly congratulating himself for fixing the air handler situation by closing those two valves. While closing the valves was the absolute wrong thing to do, I let him have his moment. One battle at a time.

It didn’t take long to figure out why there was no hot water. The circulator that pumps water through the FPHX on the tank side was a Grundfos pump with a cast iron volute. The volute was rusted shut and had killed the pump. Who does that? So, I replaced it with the Taco pump that you see in Pic A. Now we have hot water. 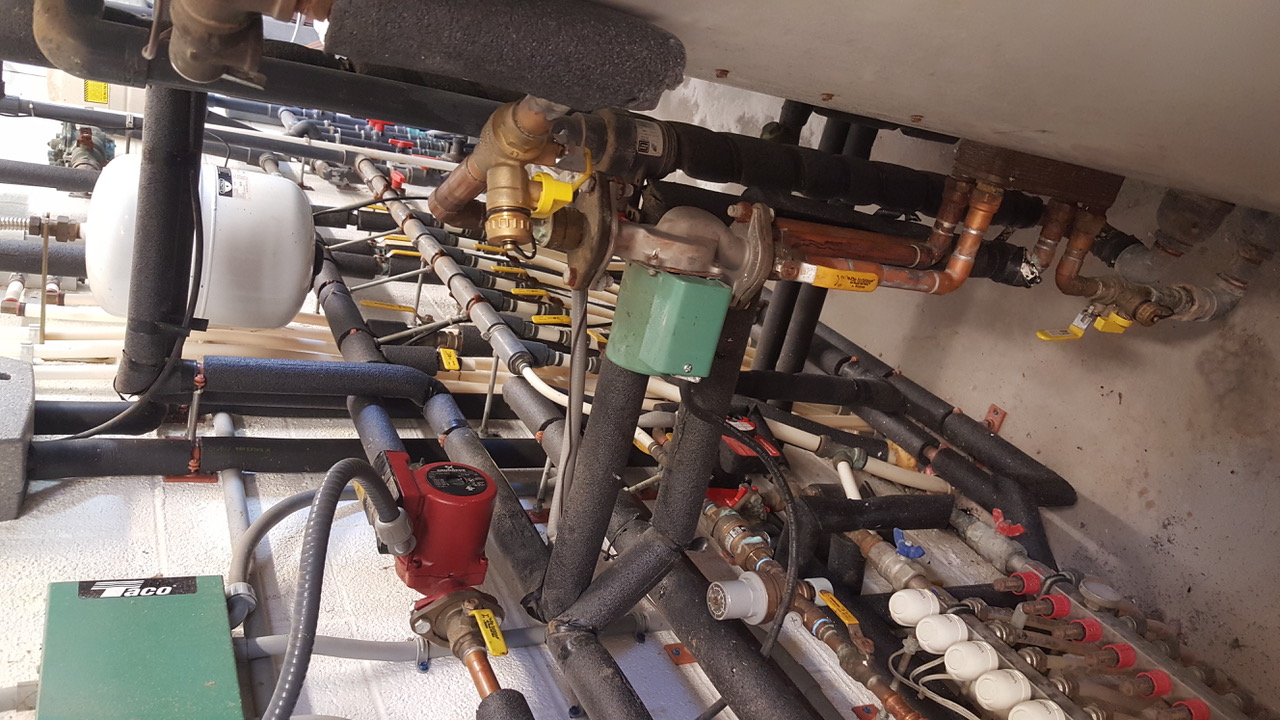 Without that pump running, the tank was never satisfied and sent a constant call for DHW.

The DHW loop was plumbed with ¾-inch copper piping. The DHW pump was a Grundfos 26-99. You know as well as I do that it was only a matter of time until that pump was going to burn up from cavitation.

I began pulling off the pipe insulation in an effort to see what might be entailed to re-pipe the DHW loop, and this is when the heating goblins offered up yet another plot twist. The DHW loop and all the secondary loops were tee’d off the primary loop with venturi tees (monoflow tees).

Unbelievable! This was starting to look like a bad barnyard lab experiment. I looked at the boiler wiring and discovered the DHW pump and boiler pump were wired together. The ¾-inch DHW loop did not provide enough flow to the boiler, and it would lock out during a DHW call. Their solution was to wire the pumps together, run everything off a CH call, disconnect the outdoor reset, and bump the CH set point to 180 F. This explained why the air handler was blowing warm air in the middle of the summer and also why the radiant manifold was staying warm.

I summoned the farmer and gave him all the details. I explained about the DHW pump and the ¾-inch pipe and how we should probably re-pipe the system to get everything right. I showed him the venturi tees and told him this was why the remote radiant manifold was staying hot in the middle of the summer.

Then he walked over and turned the hot water faucet on. By this time there was hot water at the tap, which seemed to please him. To him this meant that this was all the money he had to spend on this day. He had hot water, and that was good enough.

He did, however, allow me to cut out the two closely spaced venturi tees that fed the remote radiant manifold and replace them with normal tees to stop the water flow. This, it seemed, had been one of his pet peeves, and he had spent an inordinate amount of time fixated on the warm pipes that were not supposed to be warm.

Since it appeared he was not going to spend the money to make the other repairs, I twisted his arm a bit to allow me to reconfigure the piping takeoff to the air handler. He was not quite as enthusiastic about that, since he considered his closing of the valves to be an excellent fix. After I spent more time persuading, citing freezing issues, he reluctantly agreed. I removed the pump and installed a zone valve in its place. This worked perfectly because of the venturi tees.

So now I had to walk away, knowing full well that I would be back to replace that DHW pump. That’s one of the worst feelings, not being allowed to fix everything the way it should be. It’s always in the back of your head, and you are just waiting for the phone call.

As it turns out, I didn’t have to wait long. He called again and said he had no hot water. I went out and saw the FPHX was clogged with mineral deposits. It was so bad that I could only get a trickle of water through it. So, I installed purge valves on either side, hooked up my transfer pump and began flushing cleaner through it. Eventually it broke through, and I got it cleaned up. I called him the next morning and asked him if he had hot water.

“We have hot water like we never had before,” he laughed.

“Excellent,” I said. “And about those other items that need repaired?”

I was once again wasting my breath. He had hot water and that’s all that mattered. It was time to go make hay or something like that.

So, I bided my time for a few weeks and — ring! I answered the phone, and there he was again fussing about his hot water situation. This time, when I came out, it was as I expected. The DHW pump was burned up. Physics say a Grundfos 26-99 doesn’t work on a ¾-inch pipe. And so, it was with a twisted sense of satisfaction that I replaced the pump with a smaller one.

Once more he had hot water and unceremoniously sent me down the road with his booming laugh still ringing in my ears. I must be the worst kind of salesman in his eyes, always trying to get him to spend money on things he doesn’t need.

An uneasy peace settled over the land. I knew all was not well, and yet the phone didn’t ring. Perhaps he hired someone else? Oh well, I thought. I did what I could. Life goes on.

After a few months, the phone rings once more. I was elated to hear him at the other end, thinking that maybe this time he will let me fix everything correctly.

Sure enough, he was having hot water issues again, and appeared to be somewhat frustrated with the whole thing. Seizing the opportunity, I once more offered to make the major reparations needed to repair the whole system once and for all. This time, much to my surprise, he bit. The milk price must have been high because he told me to do whatever I think it needs.

I didn’t wait for him to change his mind. I had a green light, and it was go-time. We removed the decrepit, leaking solar tank and the water storage tank. Next, we ripped apart the boiler pluming and installed a new NTI S120 indirect water heater.

I put in another Grundfos 26-99 for the DHW pump. Only this time, it was on 1-1/2-inch pipe instead of ¾-inch. I got the boiler rewired to accept individual calls for DHW and CH and reconnected the ODR control.

The NTI S120 was perfect for this environment; it’s a stainless-steel tank and has a plastic outer jacket. No rust!

I fired up the boiler, and we were off to the races. The indirect heated up quickly, and everything was working like a well-oiled machine. The farmer and I were pleased as punch. He had endless amounts of hot water, and I had the satisfaction of a job done right. 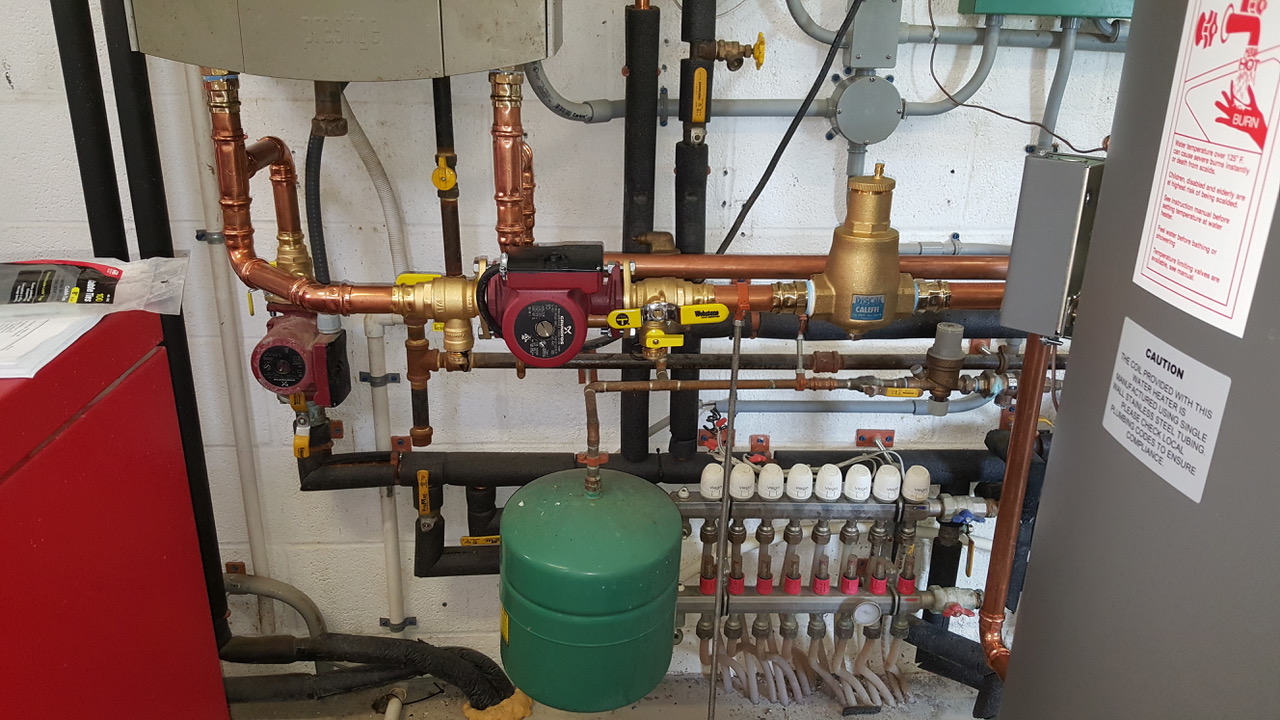 Remember those heating goblins? Persistent creatures that will not die? They left me alone for about six months until boredom set in, and they set me up for another big hoorah.

The farmer called once more, and this time my heart sunk to my feet. I guarantee my work and if this is something I did, the repairs will be on my dime.

“What’s the problem?” I asked.

“Well,” he said. “This boiler NEVER shuts off anymore, and we are blowing through our 1,000-gallon propane tank like nothing.”

“It just doesn’t seem to be as hot as it was before,” he replied.

There is nothing scientific in a farmer’s answer when you start asking technical questions about water usage and such. I was on my own to figure this out.

I arrived at the job and sure enough, the boiler was running wide open on a DHW call. Everything looked normal enough. The indirect was supplying hot water to five robotic milkers. There was a recirculation line installed to provide them with instant hot water. All this piping was done underground before the concrete was poured.

I thought to myself, “There is no way these robots are using this much hot water. It just can’t be. There has to be a leak.”

Once more, I questioned the farmer to no avail.

“Do you ever notice any wet spots or warm spots anywhere in the building floor where they shouldn’t be?” I asked.

He had seen nothing except his cows and hayfield.

After poking around for a while, slogging through cow manure, and almost getting kicked by one of the ungainly creatures and knocked off my feet by a manure scraper that came out of nowhere, I found it. One of the DHW supply lines had a bit of water bubbling up out of the ground when I wiggled the pipe. I valved it off, and within minutes the indirect heated up and was satisfied.

A ¾-inch pex line had blown apart underground; that wastes an awful lot of hot water! Not wanting to, or knowing where to tear up the concrete floor, we decided to run a new hot water line above ground.

Everything is working as it should. I’m done now, right?

Back out I went. Everything looked normal, so I interrogated the farmer in earnest. I could sense that all he wanted to do was go make hay, but after a mind-numbing, endless interrogation session, I discovered that they had removed all 10 check valves from the water supplies in the robots. This made no less than five cross connects. No wonder all the confusion! They removed them because they were leaking. And they had been well satisfied with their fix, much like valving off the air handler.

But we got new check valves put in, and everything went back to normal. The propane usage has dropped to less than a quarter of what was being used, and they have all the hot water they can use.

The heating goblins are sleeping.