How do you deal with a heating system problem that can’t be fixed?

Are you sure you want to take that job? Why not! After all, who doesn’t love a good challenge? Except sometimes, the challenge just doesn’t go away. You solve one mystery and think, “Ah-ha! I got you now!” But by the time you get on with your life — before the satisfaction of solving a mystery has worn off — that job rears its ugly head again and says, “Look at me now! I bet you didn’t know I can do this trick.” And back you go to solve yet another mystery.

It seems like some heating systems are plagued from the day of their inception. They usually start off with a bad design and misapplication. After that, the heating goblins attach themselves to the system and plague it until the day it dies.

You aren’t responsible for any of it because you didn’t install it. Yet here you are, pulling your hair out, grinding your teeth and racking your brain, trying to figure out what the heating goblins are up to now. You are here because you have earned the reputation of that guy who has the answers. And, you can’t walk away because that would mean giving up. And giving up is not something good contractors know how to do, even when they should.

I had one such system plaguing me for the last two years. I think I have everything under control now, knock on wood, but it was a marathon. It all started with the boiler. I received a call from this dairy farmer. He got my name through a referral, and I was his last-ditch attempt to get his heating/hot water system operational. He was ready to scrap the whole thing and start over. In hindsight, maybe that’s what we should have done, but all I had to do was make the boiler run. 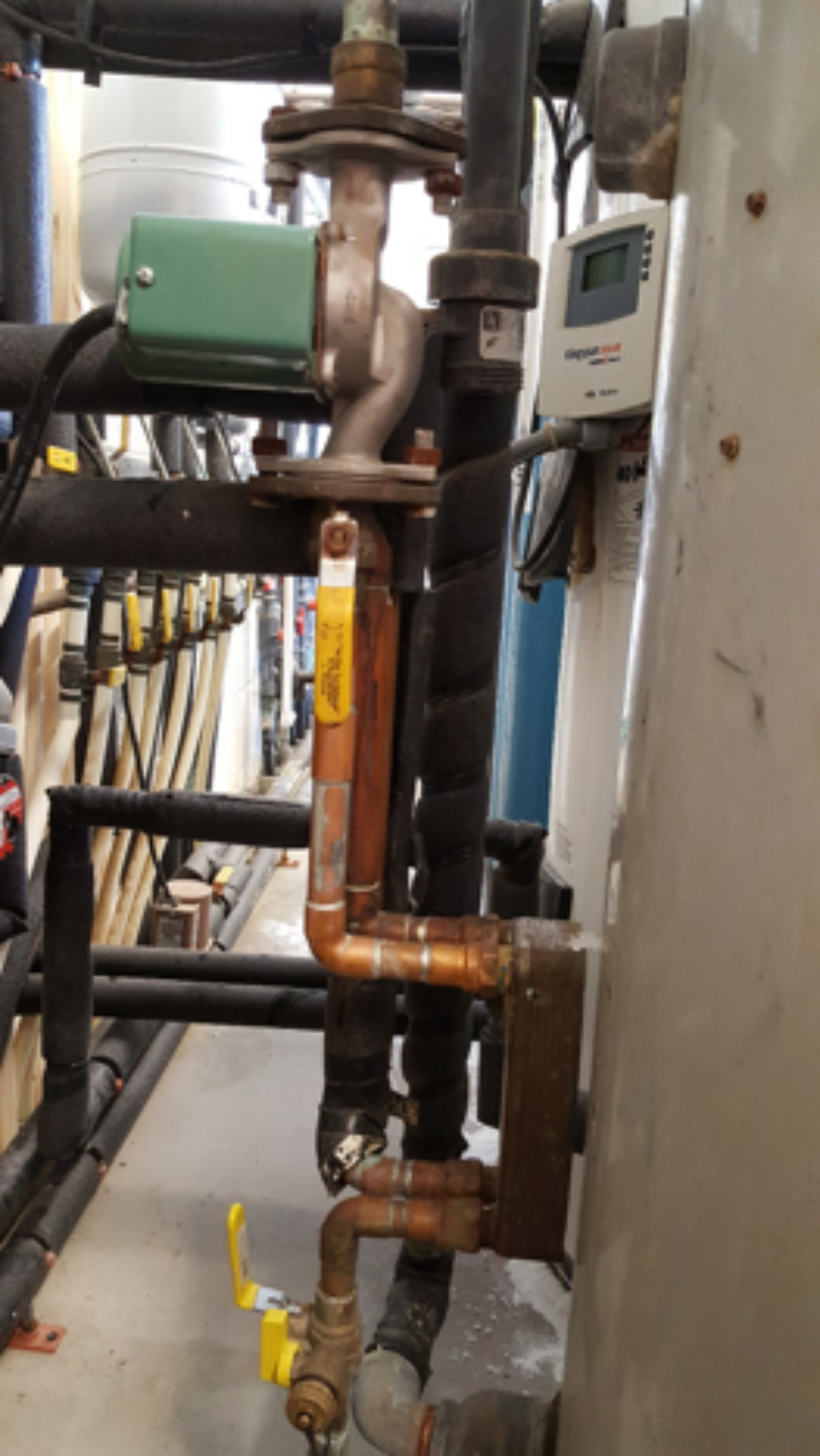 The boiler was a Triangle Tube Solo 250. It was piped primary/secondary, as it should have been. The heating zones were mostly radiant in-slab with one hydro-air coil. The radiant zones were mixed to a lower temperature with thermostatic mixing valves. There was also one zone off the primary loop that was piped through a flat-plate heat exchanger, and heated the DHW entering the calf bottle washing machine. The DHW setup for primary use was rather unique. First in line was a solar tank connected to one bank of thermal collectors. Connected in series for the final DHW production was a 100-gallon A.O. Smith storage tank. The storage tank was heated via a FPHX (flat plate heat exchanger). See picture A.

A DHW heating loop was plumbed off the boiler loop on the TT. It first went through the FPHX on the side of the storage tank, then through a HX coil in the top of the solar storage tank, and finally back to the boiler to be reheated.

But all that aside, I’m here to make the boiler run, right?

I arrive at the site with a triangle tube service kit. It includes most of the major boiler components and a service manual. I checked the lockout code on the boiler, and it was off due to flame failure. We’ve all been there before; usually a simple service and flame sensor cleaning takes care of that. Not on this one though. Remember the heating goblins? They were in this boiler, although I didn’t know it yet. I did all the normal stuff: I cleaned the boiler thoroughly; I cleaned the flame sensor; and then I put it back together, and it ran. I did a combustion analysis and got it tuned just right. High fire and low fire.

This was late in the evening, and I was satisfied that it was in working order, so I decided to go home. Before I left, I did point out a few items that we should repair sometime in the future.

The next morning, the future had arrived. Bright and early, I got the call, “No heat and no hot water.”

“Okay,” I replied, “I’ll be right there.” I cancelled my other calls and went to see what might be wrong.

Upon arrival, I saw the boiler was off on the same error code. “This is strange,” I thought. So, I reset it, and it turned on. I checked the microamps on the flame sensor, and they were within parameters, but on the low side. As the boiler modulated down, they got somewhat worse. So, I did what you would have done. I replaced the flame sensor and checked the resistance on the ignitor cord. All good there. I checked the electrical grounding system in the boiler and all the way back to the electrical load center. It did look a little rough, so I redid all the connections. The whole time I’m doing this stuff, I’m rechecking the microamp readings. Everything I did had a small reward, as the readings would go up a point or two, but they were still low.

Not being satisfied, I started looking at the gas train and venting assembly. That opened up a can of worms.

But first, the setting. 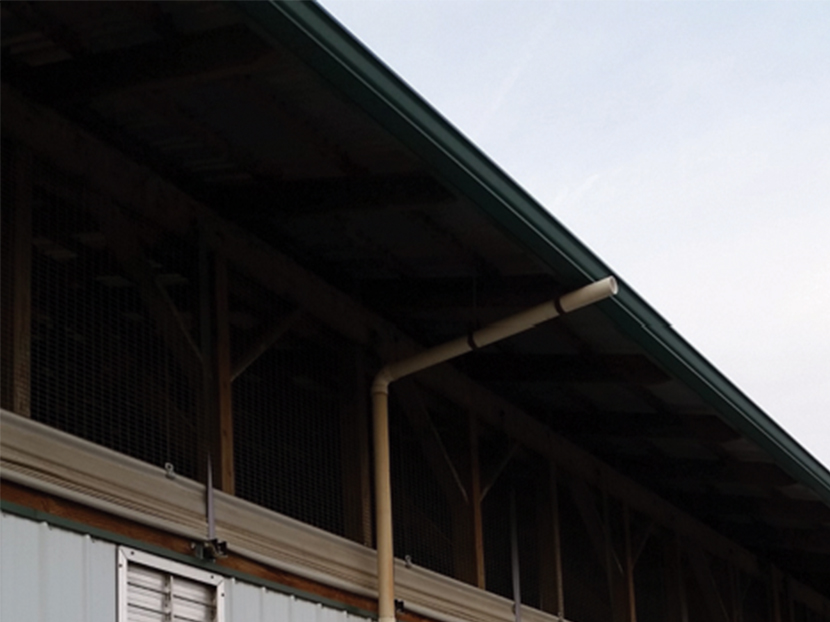 So, the dairy barn in which the boiler was located was one encompassing building. It has 20-foot high ceilings, and it houses the loafing area for the cows along with the milking area, feeding area and equipment rooms. The equipment rooms and milking areas are all enclosed and ventilated with ceilings only about 10 feet high. This allows the main barn/loafing area to be ventilated the whole way around the perimeter. This is important to get rid of the manure gasses and provide fresh air for the cows.

So how to vent a boiler in that setting? Here’s what I found.

As you can see in picture B, the inlet vent to the boiler is directly below the ventilation curtain of the barn. Not good! According to the National Ag Safety Database, decomposing cow manure off gasses hydrogen sulphide, carbon dioxide and methane, among other things. If you look at picture C on the inlet screen, you can see a buildup that verifies the boiler was sucking up these contaminants from the main barn area.

Without further ado, I tore down the boiler and inspected the blower and gas venture. Everything has a sticky tar-like buildup on the inside. No wonder stuff doesn’t work right! I did what you would have done. I replaced those components with new ones from the TT service kit.

I was pretty confident that this was going to solve the problem. I mean, there wasn’t much left that it could be.

So, I restarted the boiler and threw the analyzer back on. Combustion readings were good, but it didn’t do much to improve the microamp readings. They had improved slightly, but over time they seemed to degrade. I had never seen anything like that before.

This is the part where I start grinding my teeth. 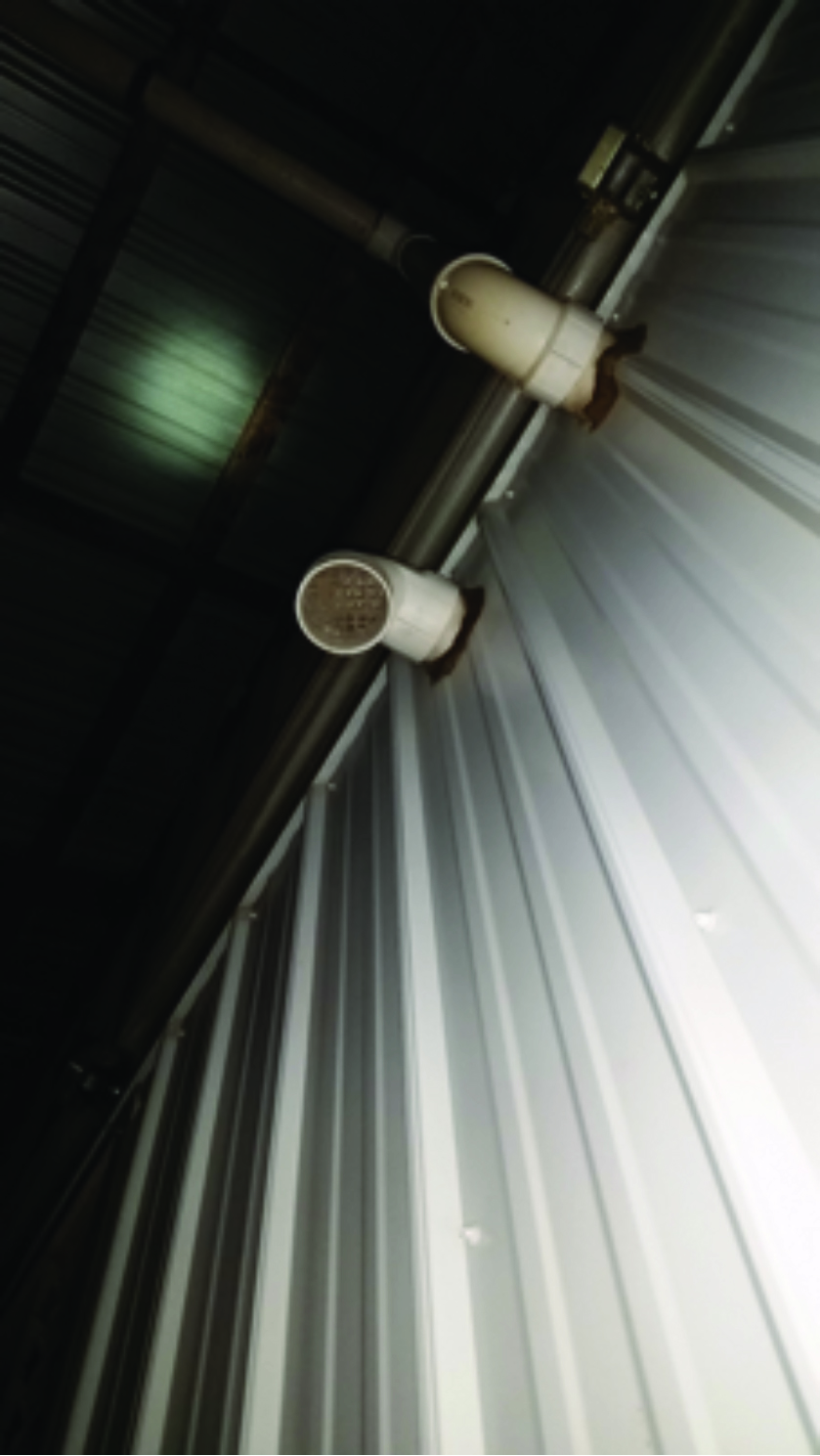 The only thing that was left was the Firetube HX and the MCBA control board. The HX wasn’t leaking, and the MCBA board was working. There had also been no error codes indicating anything wrong with the MCBA board. Nevertheless, I was running out of options and needed to do something. I pulled the control board and inspected it closely. That’s when I had one of those, “Ah-ha, got you now!” moments. I spotted a wee spec of corrosion on one of those little gadgets that do important stuff, on the board. It didn’t look like much, but those boards are sensitive. I put in a new MCBA controller and wah-la, we were off to the races. The microamp reading shot up to normal levels and stabilized.

The boiler was now functioning as it should, but I knew it was only a matter of time until this all happened again, unless I changed the venting.

But how? I couldn’t draw air from the room the boiler was in. There were vats of both alkaline and acidic chemical cleaners sitting in there. Plus, the room had a slightly negative pressure due to a ventilation fan. I couldn’t go up through the roof of the barn, because there was a peak overshot with another ventilation area along the ridge. So, I moved the inlet down to about four feet off ground level and left the outlet up high so exhaust gasses wouldn’t drift into the barn. Thus far that has seemed to be working, and the boiler doesn’t seem to be deteriorating at the pace it was before.

So now the farmer has a working boiler and heat and hot water once more. I mentioned that I would probably change a few things with the system that were done wrong. He listened attentively and promptly forgot what I said the minute I stopped talking. He gave me a check and sent me on my way. He had heat and hot water, and that was good enough for him.

For a short time, all was well. Then the heating goblins got restless again, and I was summoned for another tour of duty.

Tune in next month for the rest of the story!