A college football stadium is an iconic symbol of American energy, passion and enterprise — it’s a volcano of noise and excitement on game day.

One of the most unique demonstrations of game day enthusiasm can be found in Lexington at the University of Kentucky’s Commonwealth Stadium, home of the Wildcats football team.

On game day, Wildcat devotees gather noisily for the celebrated “Cat Walk.” It’s been described as an “undulating, 200-decible funnel of crazed humanity,” where screaming fans adorned in blue and white, some festooned with body paint head to toe, line up a short distance from where the team bus arrives.

When the bus doors open and players surge out, the squad begins their adrenaline-fueled game day rush. And that’s just the beginning of the game day experience where youthful excitement fuels a robust blend of hormones and school pride.

The school’s more than 30,000 students share an uncommon zeal for the school’s football team, and the stadium found at the epicenter of their passion. 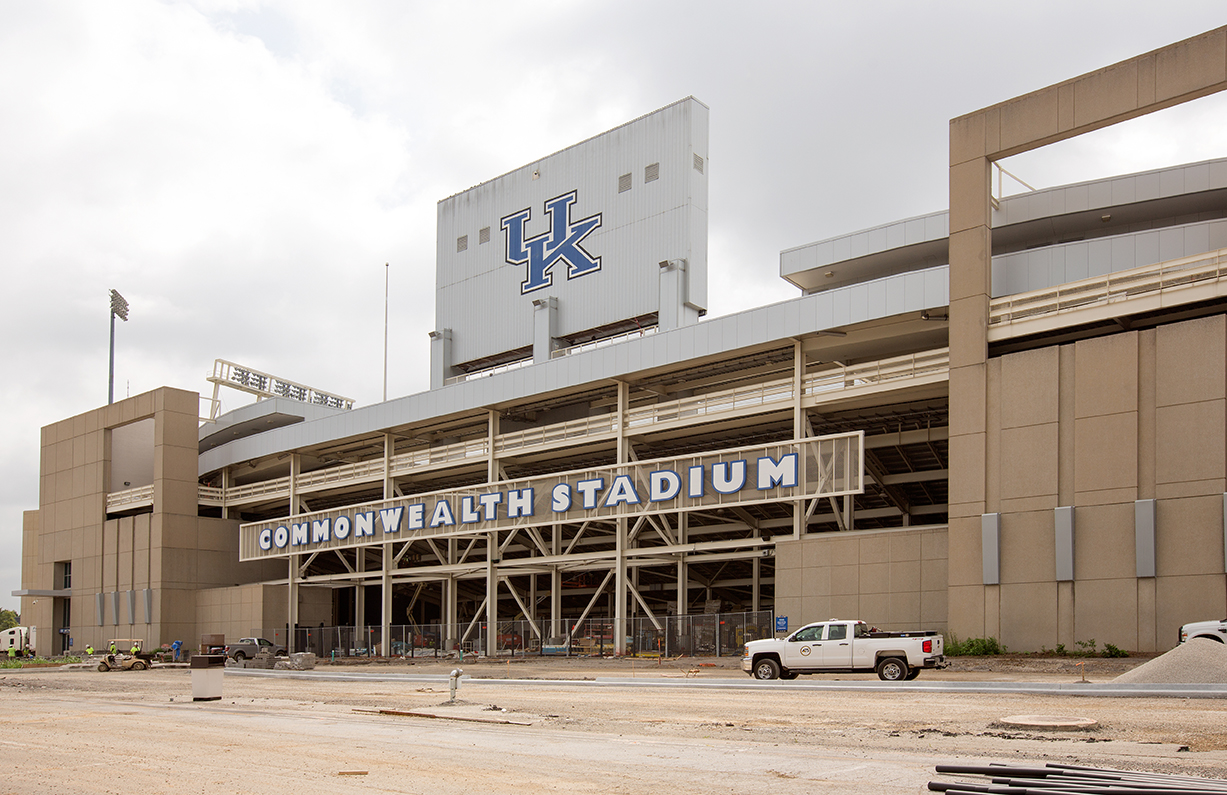 Three years ago, the Wildcat’s open-air arena, “House of the Big Blue Nation” — or more widely known as the Commonwealth Stadium — was, well, rather run of the mill.

Mitch Barnhart, the University of Kentucky athletics director says that, when he laid eyes on the stadium for the first time, it certainly wasn’t what he’d hoped it to be.

It just so happens that preparations were underway to fund a rather ambitious makeover. Between 2014 and 2015, the stadium underwent a $120 million facelift.

To start, the facade of the stadium received a stacked limestone base that runs all the way around, with design touches like reclaimed barn wood in various lobbies and outdoor spaces, giving it that exclusive, unique Kentucky feel.

Maybe even just a bit like a bourbon barrel?

More than $11.2 million of the renovation project was geared toward improved concession stands and bigger, better restrooms — ensuring fans get in and out faster — and back to the game.

More than 25 bathrooms, 16 concession stands and concourses throughout the stadium were enhanced and received all new, state-of-the-art plumbing fixtures.

January 2014 marked the kickoff of Davis & Plomin’s endeavor at Commonwealth.

“We began by installing the underground sanitary sewer lines for the first floor concession stands and bathrooms,” explains Jeff Buhr, project manager at Davis & Plomin. “We also demolished the old water mains to allow room for the new ones.” 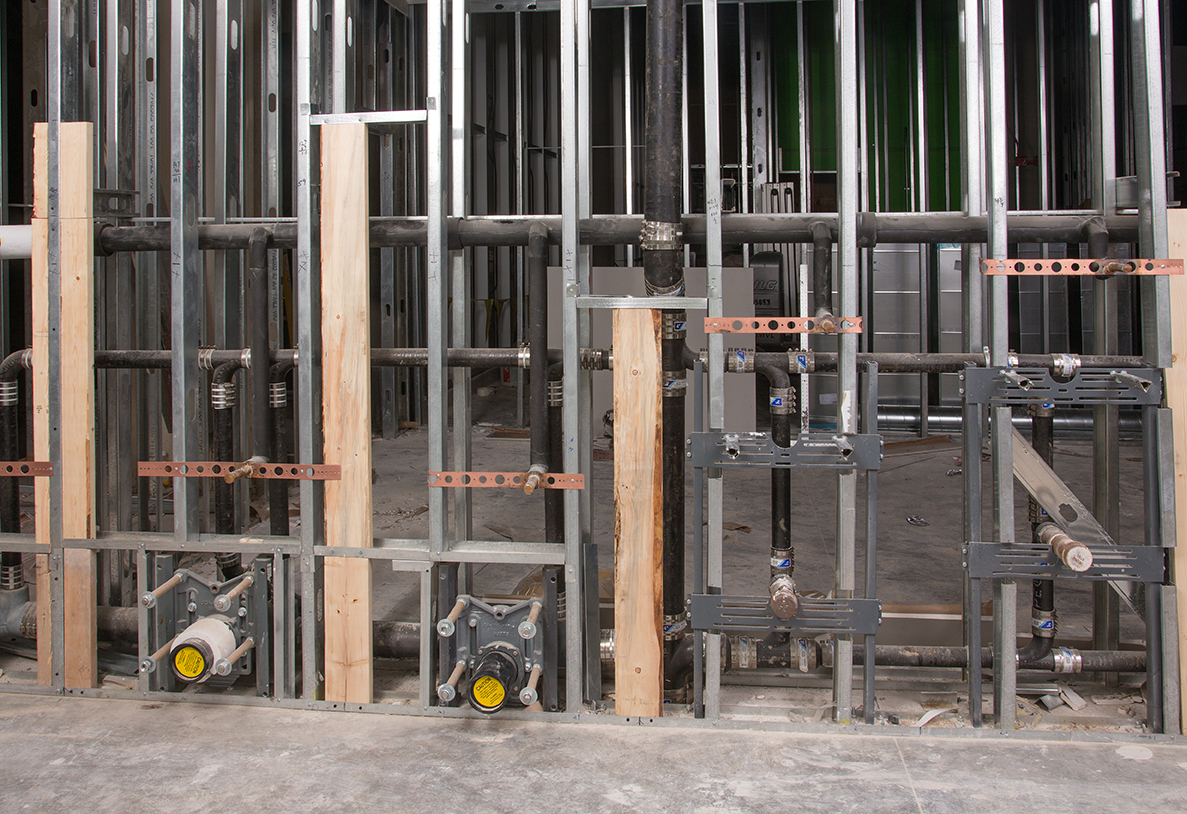 By June of 2014, Davis and Plomin’s work was ready to move inside the stadium, beginning with underground and under-slab plumbing.

Adding to the existing bathrooms and concession stands, several new facilities were installed to more conveniently serve the fans.

Managers at Davis & Plomin worked closely with Craig Cumberledge, partner, and others at the manufacturer’s rep firm, Cleveland, Ohio-based Disney-McLane, to select a variety of plumbing materials and equipment used for the substantial job.

“This was a project we were delighted to be involved with,” Cumberledge says.

“We turned to Watts for a majority of the materials. Our customer, Davis & Plomin, uses a lot of its products, with no reservation because of the manufacturer’s solid performance across a broad spectrum of commercial jobs,” he adds. “They also favor Watts because of the time-saving advantages when installing its technology.”

Behind the scenes in the locker rooms, updates were also happening. New showers were installed to more readily serve the team before and after games. Six-inch round, bronze top Watts FD104-A6 drains were specified.

Drains for all occasions

With more than 60,000 fans surging through the concourses, the stadium floors and drains had to be up to par for the traffic.

Not only would heavy foot traffic wear and tear them, but attendees’ trash that accumulated — gum, food items and plenty of spilled beer — had to be taken into account.

“Twelve-inch by twelve-inch square bronze Watts drains were specified for the concourse areas,” Buhr says. “We knew that they would hold up to the traffic — and trash — that accumulates on game days.” 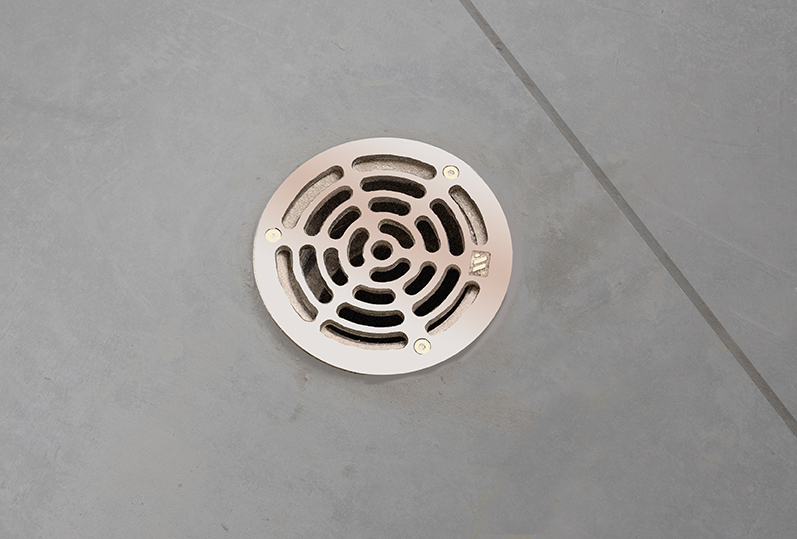 Four – and six-inch brass-top cleanouts with epoxy exteriors and bronze interiors were installed amongst the drains in case the lines ever backed up and a main would need to be cleaned.

Up on the roofs, decks and overhangs, Watts RD300 drains were chosen to whisk away rain and outdoor debris.

At work, in season

Buhr explains that crews were able to get the most invasive work done during off-season periods when there was no conflict with sporting events.

During football season, Davis & Plomin crews put their heads to the grindstone from Monday through Thursday, breaking for game day, preparation and cleanup.

“Assuring to make as much progress as possible in our short work weeks during season was our top priority. We weren’t about to disappoint 60,000-some screaming sports fans,” Buhr chuckles.

At the peak of their work at the Commonwealth Stadium, there were 36 Davis & Plomin plumbers and pipefitters on the job.

Not only did Davis & Plomin tackle all of the plumbing, it took on all the heating and ventilation work in the concession stands, locker rooms, press boxes and suites as well.

“We provided heating and cooling for the stadium, as well,” Buhr explains. “We specified Daikin VRF systems throughout all closed spaces and ventilated bathrooms and kitchen areas — installing all ductwork and piping necessary for that, too.”

It was a busy year and a half for Davis & Plomin — with work wrapping up in September 2015. In fact, technicians were making final water connections and firing up new HVAC equipment on the very first game day of the 2015 season.

“It gives us a real sense of pride knowing that we helped improve one of the area’s finest, most popular sporting venues,” Buhr concludes. “Now, as a new generation of players and fans experience the stadium in new form, their excitement will add new energy to school tradition.”