Free Subscription
Home » What is PLEV?

Energy and maintenance expenses account for approximately 75 percent of the life-cycle costs of a centrifugal pump. With a growing emphasis on reducing energy consumption driven by government regulation and businesses seeking operational and financial efficiencies, HVAC system designers are seeking system solutions that maximize efficiencies while reducing costs.

To address this demand and the industry’s evolution, Bell & Gossett (B&G), a Xylem brand, has introduced a new pump selection criteria called Part Load Efficiency Value (PLEV). PLEV is a calculation that represents the efficiency of the pump at partial flow rates and can be used to gauge true pump performance within a hydronic system.

Centrifugal pumps installed in HVAC systems typically operate in variable load applications that see a fluctuation of flow requirements, based on the heating or cooling load of a building at any given time. General industry practice is to make pump selections based on a system’s design load, or the maximum capacity of the system. With this approach, the pump system efficiency is typically measured at 100 percent capacity, even though the system generally only operates at that level 1 percent of the time. Given the reality of how buildings actually operate, traditional sizing and measurement do not accurately reflect where pumps operate most of the time.

This practice is a contributing factor to why the majority of systems today operate with oversized pumps, leading to inefficiencies. A pump is considered oversized when it does not operate within about 20 percent of its best efficiency point (BEP).

There are a number of reasons why system designers oversize pumps, including adding safety margins beyond those factored into the design by pump manufacturers. Oversizing pumps is a common, yet often unnecessary, practice that increases the system’s operation, maintenance and capital costs. For example, oversizing the flow by 5 percent increases the energy demand by more than 15 percent. An increased flow of 10 percent raises the energy consumption by 30 percent.

The Hydraulic Institute has defined preferred operating range (POR), which is a range of flows on either side of the BEP in which hydraulic efficiency is not degraded. POR generally extends from 70 to 120 percent of flow at BEP. When a pump operates outside of its efficiency range, it increases the likelihood of cavitation — a noisy and damaging condition caused by vapor bubbles forming and collapsing at the pump impeller — and overloading the pump motor. Long-term mechanical damage to the pump can result when any of the following occur:

Practices such as throttling the pump or trimming the impeller combat the effects of oversized pumps to a certain extent, but they aren’t always the most efficient solutions. If a pump is so oversized that its flow must be throttled more than 50 percent, it should be replaced with a properly sized pump.

Proper system design is a critical element in minimizing life-cycle costs and reducing power consumption. Studies have shown that 30 to 50 percent of the energy consumed by pump systems could be saved through equipment or control system changes. By matching the equipment more precisely to actual system demands, pumps will use less power and require less maintenance, reducing costs and extending equipment life.

B&G’s PLEV formula creates a modern standard for the industry, providing the most accurate specification of a centrifugal pump at partial flow rates, in turn helping to eliminate oversizing often associated with system design.

PLEV is derived from the successful Integrated Part Load Value (IPLV) performance calculation developed by the Air-Conditioning, Heating and Refrigeration Institute (AHRI) in AHRI 550/590-1998. The proven formula describes the equipment efficiency while operating at various capacities of a chiller system, and is crucial in supporting energy use and operating costs throughout the lifetime of the system. B&G engineers have adapted the formula for centrifugal pumps used in HVAC systems and updated B&G’s ESP-PLUS online selection software with the PLEV selection criteria.

The subscript “v” denotes variable speed operation with the control, or fixed head, calculated within a system’s critical circuit. B&G’s ESP-PLUS software defaults to 30 percent of pump TDH (Total Design Head) to represent the minimum control head within a system. The American Society of Heating, Refrigerating and Air-Conditioning Engineers’ ASHRAE 90.1- 2013 guideline requires that the total head loss in a system be calculated making it natural to calculate the critical zone’s fixed head, too. This is the number that should be used as it represents a more accurate calculation, which will be reflected in the cost analysis.

PLEV can be used to accurately compare pumps from different manufactures to identify overall operational efficiency. The 30 percent TDH, or calculated minimum control head within the equipment schedule along with specifications, will ensure a fair comparison among manufacturers.

PLEV provides system designers more latitude in selecting pumps to the right of BEP, as long as system head loss is calculated accurately (See Figure 4). Pump selections to the right of BEP may have a higher PLEV than other selections because the PLEV load profile is heavily weighted on operating hours at 75 percent and 50 percent operation. These load profile points account for 87 percent of operating hours. 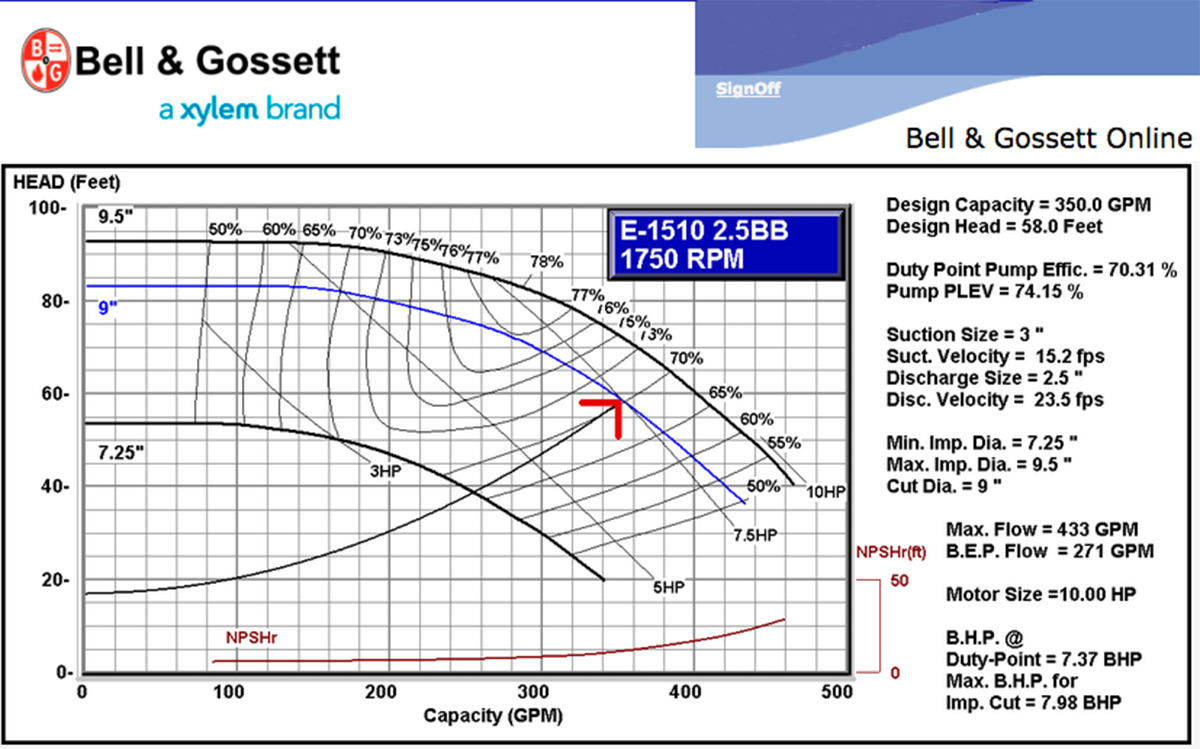 If system head loss has been estimated and a selection is made to the right of BEP, there is a risk that the pump will run outside the acceptable range of operation. In a worst-case scenario, the pump may run off the end of the pump curve. ASHRAE guidelines prefer pump selections between 85 and 105 percent of BEP.

PLEV can be considered as a factor in two-pump parallel pump selections, but users must carefully evaluate the requirement for a point of intersection between the single pump curve and the system curve. The risk of selecting a pump with a higher PLEV, or to the right of BEP, will increase the likelihood that the single pump curve will not have a point of intersection. In general, selecting pumps to the left of BEP in multiple parallel pump systems continues to be a recommended practice to minimize operating costs as a whole.

In applying PLEV as a pump selection criterion, it’s critical for designers to select pumps that operate at the highest efficiencies across the largest segment of the pump curve. Newer pump designs incorporate cutting-edge computational fluid dynamics technology to increase efficiency, such as B&G’s e-range of centrifugal pumps that operate efficiently to the left, or right of BEP.

B&G’s term for these efficiency ranges is Efficiency Islands. An Efficiency Island is an envelope on the performance curve where the pump operates as widely and as deeply as possible within the POR. These extensive efficiency profiles enable users to maintain significantly higher levels of efficiency over a much wider range of operating conditions, leading to lower power consumption and life-cycle cost, and increased pump reliability and overall system performance.