A Fight Over Plastic Pipe in Michigan

Water service lines aren’t the only piping at issue in the Wolverine State.

A bill winding its way through the Michigan legislature hopes to lower the cost of underground pipelines for drinking water, wastewater or storm water infrastructure projects.

Or rob engineers, utilities, public entities and other water works professionals from designing systems in a manner that best serves the distinct needs in each of their individual communities.

It’s one or the other.

We’ve focused so much on water service lines in our coverage of the Flint Water Crisis that this other matter slipped our attention.

We first learned about the matter from Andrew G. Kireta Jr., vice president of the Copper Development Association, when we called him about the CDA’s recent effort that helped Flint obtain 200,000 feet of copper piping for its service line replacement program. (For more on that, see our sidebar on page 30.)

On March 23, the Senate Committee on Michigan Competitiveness advanced just such legislation.

“In the past, there were fewer types of pipe materials available,” Committee Chairman Mike Shirkey, state senator for Michigan’s 16th district, said in prepared remarks. “Today, engineers can choose among a much wider range of materials that meet current standards for safety, strength, temperature and performance.”

The bill, Shirkey added, encourages competition in the bidding process, which could save the taxpayer’s money while still incorporating the expertise of engineers.

“There are thousands of miles of water and sewer pipes across the state, and many of these pipes are getting too old to use,” Shirkey said. “Replacing the pipes can be expensive, so engineers should have the freedom to choose from all available options in their planning.”

The bill will now be considered before the full Senate. 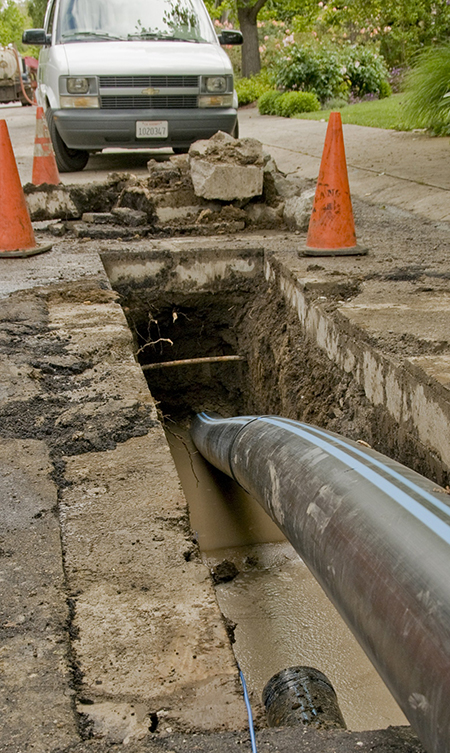 Sponsored by Sen. Rick Jones, Senate Bill 157, “Public Works Quality Material Procurement Act,” would prohibit a public entity from adopting or enforcing an ordinance that restricted or prohibited the evaluation, comparison or use of certain pipe and piping materials that meet current ASTM International or American Water Works Association standards, to be used for a public works project financed in whole or in part by public funds.

And in case you haven’t guessed by now what that “certain” pipe and piping materials might be, that would be plastic. Legislation such as SB 157 is largely due to the support of the PVC Pipe Association; the American Chemistry Council and the Plastics Pipe Institute Inc.

The provision also states it would not limit the professional judgment of the project's engineer to specify or select any acceptable pipe and piping material based on the performance requirements for the particular public works project.

“The proposal is not a mandate that cities, counties or townships use a certain material,” Jones told the Michigan Capitol Confidential, which describes itself as reporting “with a free-market news perspective about the public officials who seek to limit government, those who do not, and those whose votes are at odds with what they say.” “It simply requires them to consider materials that meet high standards.”

While the legislation looks to be gaining momentum in Michigan, bills such as this one have been tried before in other states. As far as we could discover, the first such case was in Indiana in 2014, and a total of 11 states have tried since then. None of the legislative efforts have succeeded.

Open procurement is one of those innocent phrases that sounds simple enough. After all, why would anyone be against more competition, particularly for infrastructure projects meant to last for generations?

“This reform would allow new technologies that meet current standards for safety, strength, temperature and performance to be given a fair chance in the bidding process,” Jones said. “Replacing Michigan’s aging water infrastructure will be costly; by removing a virtual monopoly of outdated legacy materials and allowing all materials to be considered on projects, we could significantly lower costs to taxpayers.”

And, as you’d expect, words such as “virtual monopoly” and “outdated legacy” – well, them’s fightin’ words to metal pipe makers. It also didn’t help any when the original Indiana legislation specifically mentioned PVC pipe – a fact that the opposition has latched onto ever since.

Opponents say the requirement would be anything but “open” and instead restrict and limit the authority of people working on the demands of specific projects. Multiple design standards for each project might be needed. And litigation and delays might ensue.

The watchword for those in favor of the legislation isn’t so much “open procurement” as much as it is “closed competition.”

“All we are asking for is open competition,” Tony Radoszewski, CAE, president of PPI, told us. “We’re not trying to tell engineers how to do their jobs. If it meets the engineering requirements, it has to be allowed on the bid.”

And Lance MacNevin, PE, director of engineering for PPI’s Building and Construction and Power and Communications Divisions, also mentioned many instances of cities making a switch to HDPE for water service, including several cities right in Michigan.

One of the many recent projects to date for using HDPE plastic piping for water mains started more than seven years ago in Palo Alto, California. The city decided to replace a water main system made up of concrete, PVC and cast iron with PE4710 (HDPE) pipe.

Since then, many utilities and cities in Michigan (such as Livonia, Lansing and Lyon Township) and around the country have installed HDPE water piping systems.

In addition to HDPE pipe providing the needed performance for these applications, proponents also say that bids of all kinds, including those for concrete or iron pipe, come down in price when plastic is part of the bidding process.

“When a product has no competition,” Radoszewski added, “if officials don’t have to look at anything else and they’re going to continue to use the same thing forever, then the suppliers of that material can charge whatever they want to charge.”

He also objects to the claim that this legislation forces the engineer to use a certain product.

“The reality is that in closed-bid municipalities, that is those where only one material is allowed, the engineer is already forced to use only one product,” Radoszewski explained. “We have been turned down at the door from even talking to engineers since plastic pipe is not allowed.”

The American Chemistry Council has more information on cost comparisons on its website.

“The  average cost to replace a 12-inch water pipe in ‘closed competition’ is $84 per foot,” says the council regarding a study done in Michigan. “But with ‘open competition,’ the average cost is $63 in pipe capital costs alone.”

“Furthermore, competition lowers cost for the existing material,” the council adds. “Ductile iron pipe of the same diameter was found to be less costly in open competition cities than in closed cities.

On the matters of performance, the council also takes a stab at the competition by noting that 17 percent of the country’s potable water is lost to leakage due mainly to corrosion.

“Additionally, municipalities must increase operational expenditures for legacy materials, including having to spend more money on energy to pump water through corroded and calcified pipes,” the council contends.

In the end, Radoszewski just wants a seat at the table to, naturally, promote his industry’s pipe materials, which the council says is closed off to plastics competition from an estimated 78 percent of U.S. water systems.

Within the PPI is the Municipal Advisory Board comprised of contractors, academics, municipal water systems officials and design engineers. The group’s mission is to provide the “highest quality and most cost-effective HDPE piping solutions for municipalities” and improve the standards, design and installation of HDPE systems.

“Many times,” Radoszewski said of the municipal officials, “they’re just not aware of it or they have a bias against something other than what they’ve always used.”

“Our communities are not opposed to PVC or plastic pipe,” John LaMacchia, a spokesman for the Michigan Municipal League, told the Michigan Capitol Confidential after the bill headed to the full Senate. “In many cases the same standards allow for PVC or plastic in the system. For us, it’s about where it is appropriate to do that. We think it is important for local governments to maintain the ability through their engineers to develop those standards. In a lot of ways that can ensure quality, safety and uniformity.”

LaMacchia, whose group is Michigan’s largest collective voice for municipalities, added that local governments are always looking to save money and in no way are biased against plastic pipe.

That’s about as mild-mannered response we read against SB 157.

Ultimately, opponents of the legislation say the bill takes decision-making away from professional engineers and local communities and makes a complex, site-specific decision just another paragraph in another page of statutes.

“While the legislation may seem innocent and straightforward on its face, it is part of a national effort to deny utilities, engineers and other waterworks professionals the ability to continue to design projects in the manner that best fits the needs of the project and/or their community,” according to a no-bones-about-it website from the Ductile Iron Pipe Research Association dedicated to stopping any such legislation. “Quite simply, the national effort is designed to benefit PVC pipe by forcing a product on water systems that they can already use, but in many cases and for many reasons, choose not to.”

Meanwhile, the AWWA, which considers itself neutral about which materials utilities select for their projects, is also strongly vocal in opposing the Michigan bill.

“The careful consideration of materials appropriate to each infrastructure project is a critical part of this,” the AWWA states in a form letter that members are encouraged to send to legislators. “While we recognize that every kind of pipe has appropriate applications, not all kinds of pipe are equally appropriate for all applications. AWWA believes it is critical that utilities and their design engineers be able to specify the kind of pipe that they consider most appropriate for each particular project in their community.”

One bullet point included in its list of reasons to oppose the effort goes straight to the heart of the matter for the standards maker:

“The bill implies that all water pipe material are equal as long as they meet the minimum AWWA and ASTM standards, but pipe materials have significantly different characteristics and are not equally appropriate for all applications. For that reason, the use of AWWA standards in the definition of ‘acceptable piping materials’ may be flawed and misleading.”

The bottom line for the opposition is that pipe materials are not interchangeable and are not equal – each has very different service lives, strengths and weaknesses, environmental considerations, safety concerns and operational costs.

That last factor is vital since the bill’s focus is largely aimed at the initial acquisition. But the cost of the piping is just one factor when designing a pipeline since many other long-term costs must be used to determine a piping selection.

Strip these concerns away and all you may be left with is the lowest bid wins.