Keeping the Heat On

Now that many of us are in the shoulder season waiting for April showers to bring May flowers, we thought it would be a great time to profile Oliver Heating & Cooling, Morton, Pennsylvania, which has been helping keep the heat on in the dead of winter to those who need it the most throughout the contractor’s Delaware Valley service area.

“We understand the value of growth through service, not just through our professional service offerings, but through our commitment to serving our community,” David Oliver, second-generation owner of Oliver, says. “We believe strongly in giving back to the community that has helped us succeed.”

Heat for the Holidays

Oliver, which celebrated 50 years in business last year, has helped provide local families in need with new heating systems through its annual Heat for the Holidays program.

Since the initiative first launched in 1998, Oliver has donated and installed more than 94 heating systems valued at nearly three-quarters of a million dollars, relied on more than 5,600 volunteer labor hours and enlisted the help of more than 940 Oliver employees.

The Oliver team reaches out to local community leaders, residents and through social media to identify deserving families throughout its trading area.

“This can include medical circumstances, financial hardships, community involvement from the family, or other situations that might aid in the evaluation process,” a press release announcing last year’s program stated.

About the only qualifications placed on candidates are that they own their own homes, and that they live in Chester, Delaware, and Montgomery counties in Pennsylvania; New Castle County in Delaware; and Atlantic, Cape May, Gloucester, and Salem counties in New Jersey.

Oliver then works together with heating equipment manufacturers, local supply houses such as Lyon Conklin, US Supply and J Lorber Supply and area financial institutions to donate finances, equipment, materials and supplies. Oliver donates all the labor for the installations. Each job is 100 percent complete and 100 percent free to the recipients.

Although the families receive the good news during Christmas week, the actual work is organized in January, when Oliver technicians gather in the early morning hours to begin loading trucks with equipment for the day’s work. The group then gathers for breakfast and a prayer to bless the day’s work, an Oliver tradition at the start of each meeting and company event. 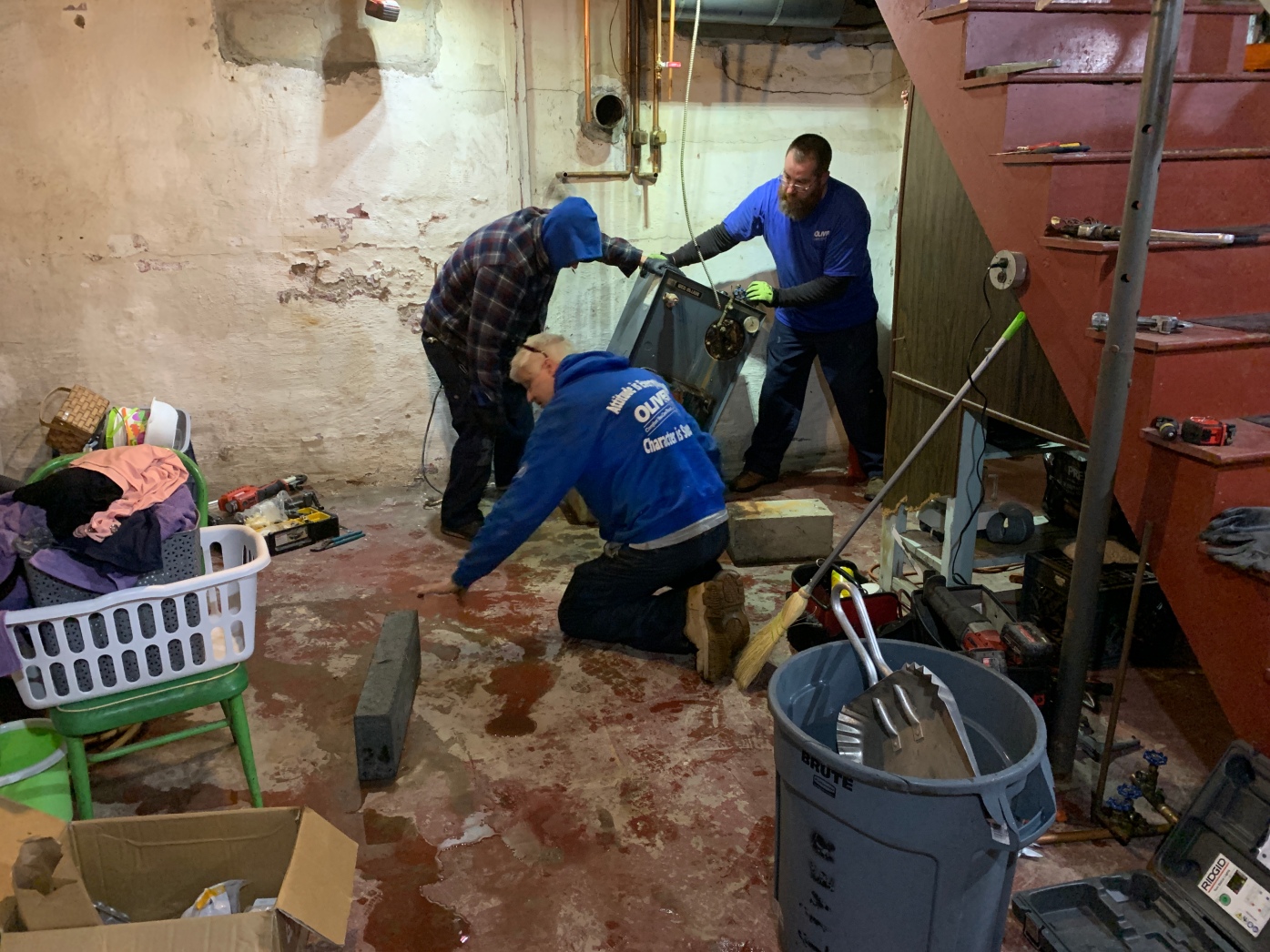 Try as it might, Oliver can’t help everyone. The company received 12 nominations in 2021. Techs head out to each address to decide who needs a new heating system the most. For families who aren’t selected, Oliver still goes the extra mile and provides regular checkups at no cost.

The Heat for the Holidays program marks a celebration of giving throughout the company. In addition to the field employees who donate their time and expertise, office staff and family members organize and distribute additional holiday cheer to the recipients of the new installations.

Joe Oliver started the business in 1971. A Yale University graduate with a master’s degree in engineering, Oliver’s backstory is very different than the many we’ve heard over the years and is truly a leap of faith. There’s a marvelous video the company did to mark its 50-year anniversary that outlines his accomplishments, which you can watch on YouTube (bit.ly/3hIS44k).

“It’s almost surreal like I’m in a movie or something,” Oliver says in the video, seemingly flabbergasted by his own success. “Did this really happen? That I can relax now and know that everything’s in place and going forward, and I’m living such a full life.”

Oliver was putting his college studies to work helping build Sikorsky helicopters during the Vietnam War. But as the war was drawing to an end, Oliver found himself along with 10,000 others out of work.

Oliver headed to a church prayer meeting where a couple of his fellow parishioners told him to go into the HVAC business.

“I didn’t know anything about it, but they were familiar with the industry and offered to give me some pointers,” Oliver says. “So I talked to my wife and we prayed and decided to go into it.”

With the help and support of his wife, Beverly, as well as other family members and his church group – not to mention attending night classes and working 14-hour days – Oliver grew his business. And when Oliver was ready to hire his first employee, a man no less by the name of Adam answered the help-wanted ad and got the job.

“This biblical coincidence, coupled with Joe’s strong beliefs, encouraged him that he had chosen the right path,” says the company website.

Although the Oliver logo has evolved several times since the doors opened, one central image has remained – a white dove, symbolizing the company’s roots in the founder’s faith. 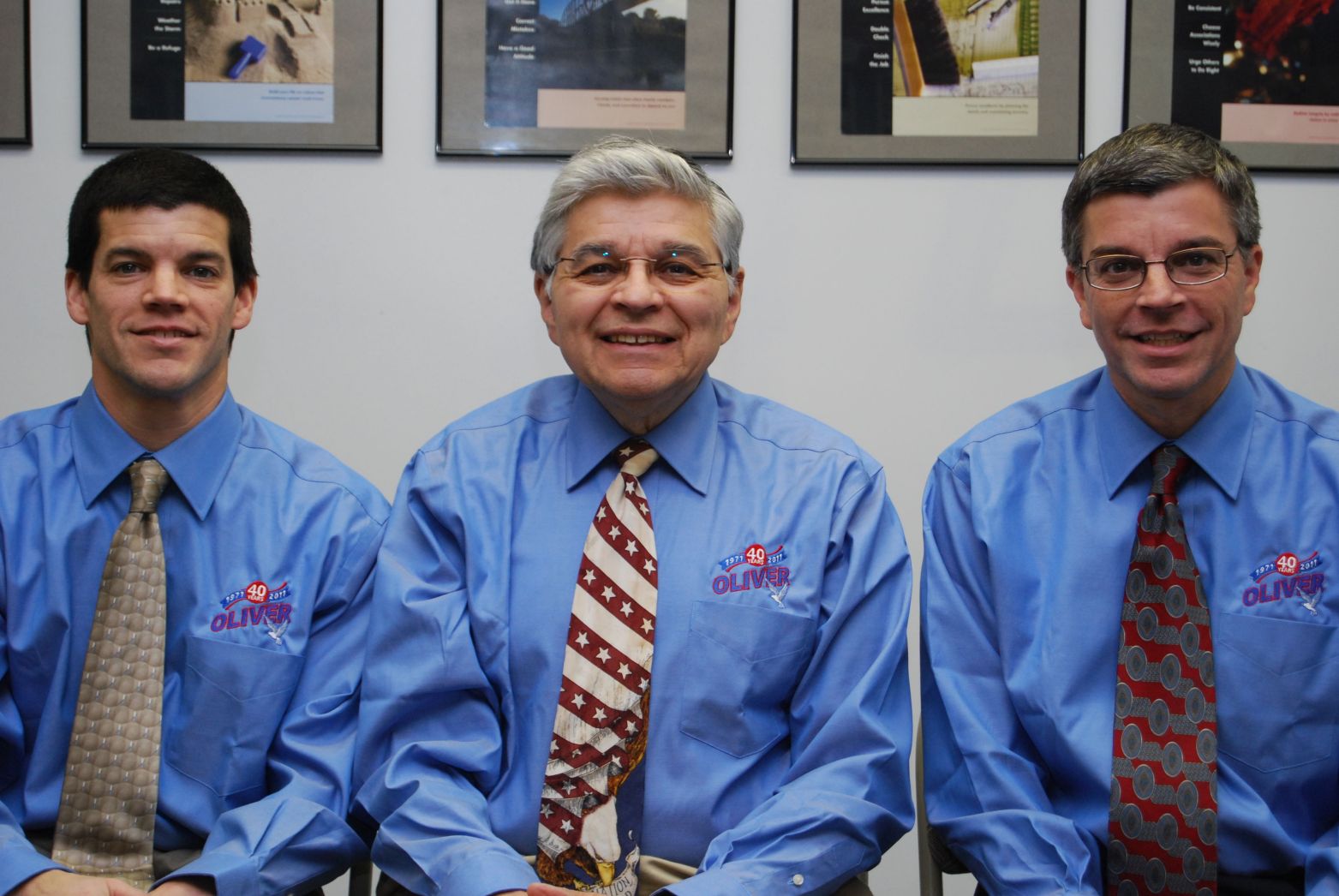 From its beginning at a church prayer meeting, Oliver has become a testament to hard work, perseverance and dedication. Since then Joe’s sons, David Oliver and Bill Oliver lead the company as owners along with non-family members, namely, Bernie Sweeny and Rocco Pace, as key decision-makers.

Oliver currently employs 225 people and has more than 125 trucks on the road. The company installs and services most types of heating, ventilation, and cooling equipment and offers plumbing, electrical, and water heater services in addition to air duct cleaning for residential, commercial and industrial needs. Oliver also custom fabricates its own sheet metal in-house for commercial and residential service projects.

In 2018, the Air Conditioning Contractors of America named Oliver Residential Contractor of the Year for the company’s “commitment to promoting professionalism and supporting the contracting industry for over four decades.”

The company has “stood the test of time,” according to David, because of the high standards and team built by his father.

In the YouTube video, Joe says success in all relationships, whether that be in marriage, work or friendship, comes down to trust.

“And to trust, you have to be real, you’ve got to do what you say you’re going to do,” he adds.

This feature is part of our Plumbers Giving Back series, sponsored by the the International Association of Plumbing and Mechanical Officials (IAPMO).