When Denver Water was planning its new, high-performance administration building, one of the city utility’s key goals was to implement a rainwater capture system and an on-site wastewater treatment system to drive overall building water use to exceedingly low levels.

Implementing such systems would take water-efficient design to the next level and would not come without challenges. With the leadership and support of the water efficiency-focused client, however, the design and construction team were ultimately able to deliver on Denver Water’s “One Water” concept.

Critical to the overall project success was a thorough understanding of the existing water use on campus and the client’s goals for water use reduction. This discovery process started very early during the master planning phase of the project, approximately eight years before the project would be completed. 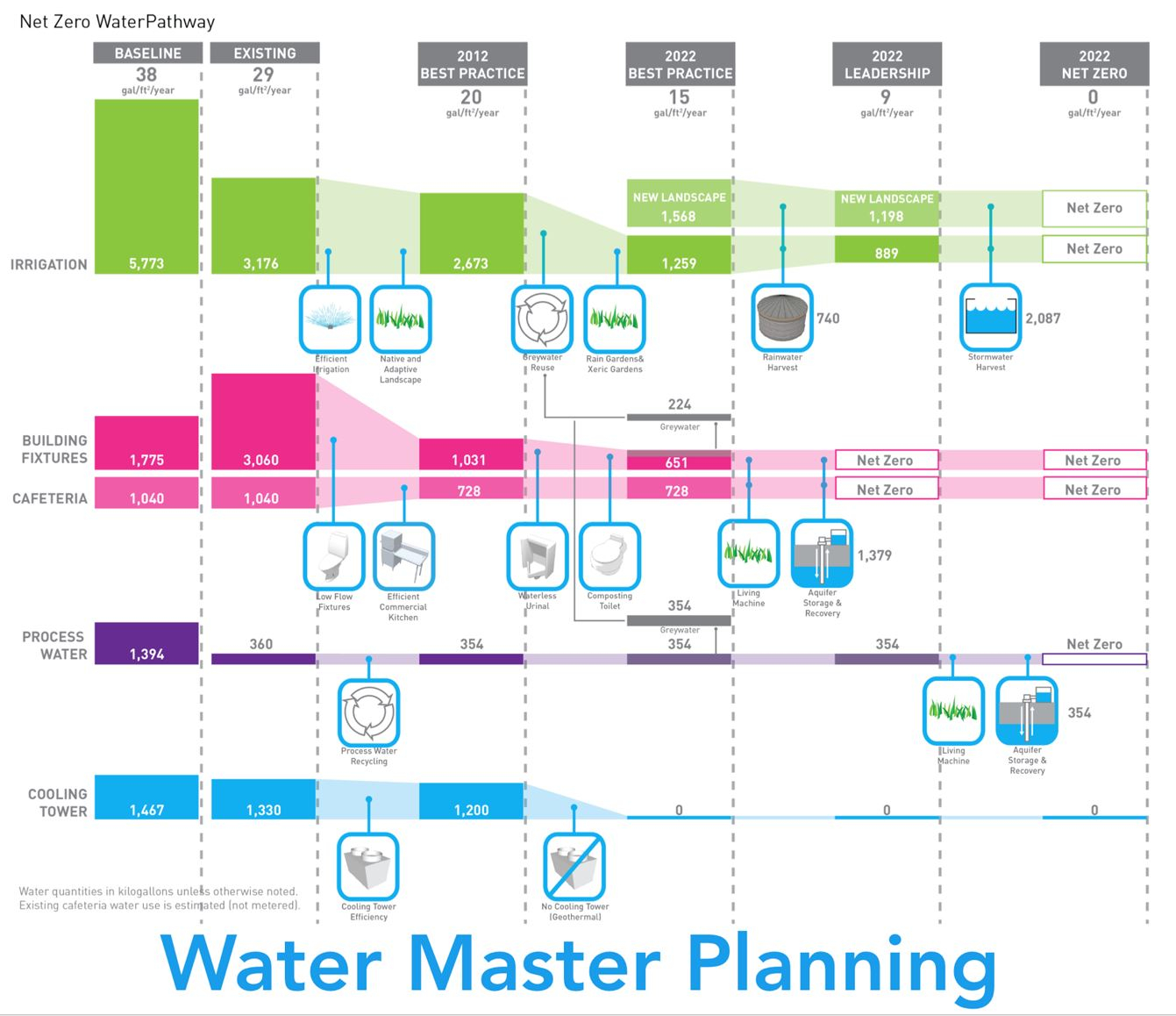 The WUI of the existing buildings on the Denver Water campus also was determined. Additionally, the existing campus WUI was broken down across various uses — irrigation, building plumbing fixtures, cafeteria fixtures, process water and cooling water. The typical baseline was modeled to be 38 gal/sf/year and the existing campus was performing at 29 gal/sf/year, already a 24 percent reduction in water use due to years of water efficiency measures by Denver Water.

From the developed baseline and existing conditions, multiple layers of best practices were considered for the current time (2012, when the master plan phase began) and into the future (2022, when the project was to be entirely constructed and landscape established, about two years after substantial completion). Additionally, stretch goals to set leadership trends along with theoretical net-zero conditions also were evaluated.

The first step toward achieving these long-term goals was a continued push on water efficiency. This included implementing a more native and adaptive landscape to reduce or eliminate irrigation requirements and deploying ultra-low-flow plumbing fixtures and commercial kitchen fixtures.

The second step was to reconsider where water was needed and whether water use could be entirely or nearly removed. The design team determined that a cooling system without evaporative cooling methods would be implemented, ultimately settling on a hybrid geothermal system (via distribution water conduit sink/source geo-exchange) coupled with air-cooled systems.

The team also determined that process water use in the water meter testing facility could be reduced through capture, treatment and, ultimately, reuse.

These best practices for eliminating or optimizing consumptive systems dropped the WUI to 15 gal/sf/year, a nearly 50 percent reduction over the existing campus. Further reduction also would be achieved through reuse systems, with the captured and treated water used for landscape irrigation and the flushing of plumbing fixtures.

All told, through best practices and more aggressive leadership measures, it was determined that the WUI could drop as low as 9 gal/sf/year. Further reduction, although possible, was determined not to be cost-effective and also counter to Denver Water’s intent to use highly regulated, utility-provided potable water for all potable water uses.

The final selected target would achieve nearly a 70 percent WUI reduction over the existing campus and a more than 75 percent reduction from the average building.

The owner and the design team set these early-stage goals to ensure that all future decisions would facilitate a successful implementation.

To address water use reduction, all plumbing fixtures were low flow using water; no waterless urinals or composting toilets were implemented due to the nuisance issues sometimes encountered with these devices. Specifically, the flow rates for the common plumbing fixtures were 1.1 gallons/flush (gpf) for water closets, 0.125 gpf for urinals, and 0.1 gallons per cycle for lavatories.

Extra care and attention were paid to the selection of the commercial kitchen equipment to ensure that it also used low-flow components.

For water reuse, the team first had to make sure that such reuse was allowed by local laws and a need for reclaimed water existed. Fortunately, local codes did allow for reclaimed water, and it would be used for typical nonpotable greywater uses, including flushing fixtures (urinals and water closets) and irrigation.

Of these three, greywater and rainwater tend to be the most common across the United States due to their more simplistic treatment requirements and reduced hazards.

For Denver Water, the team chose a plant-based blackwater system and a rainwater system. To provide a broader understanding of all the options considered, explanations of all systems follow.

• Greywater systems. Chapter 13, Nonpotable Water Systems, was added into the 2015 version of the International Plumbing Code (IPC) to govern nonpotable water systems such as greywater. This IPC chapter does an excellent job of walking through the requirements of the system, including, but not limited to, allowable and prohibited sources, allowable and prohibited uses, disinfection, filtration, makeup water, signage requirements, testing, operation and maintenance.

A greywater system was not used for Denver Water as sources were limited, which is common for office buildings. Greywater-only systems can be more beneficial for hotels, apartments and other facilities with multiple showers/tubs and clothes washers.

• Blackwater systems. In addition to the sources identified for greywater, blackwater systems typically add in water closets, urinals, dishwashers, kitchen sinks and other more contaminated wastewater sources. Blackwater systems take reclamation to another level since it contains significantly more pathogens and bacteria from feces, other human bodily fluids, and food particles, which are all particularly hazardous if not treated properly.

It is recommended that the plumbing engineer seek out a specialty consultant for the detailed design and implementation of the on-site wastewater treatment system. (Numerous regulatory requirements must be dealt with when implementing any type of blackwater system; see the regulatory issues sidebar for more information.)

The first Living Machine, which is still in operation, was installed in 1995 at the Findhorn Ecovillage in Moray, Scotland. This system consists of multiple stages (see Figure 3), starting with the influent being routed to a septic tank with overflow to the municipal sewer. From this septic tank, the water is processed in closed anoxic and aerobic tanks, followed by open aerobic tanks and then polishing wetlands. 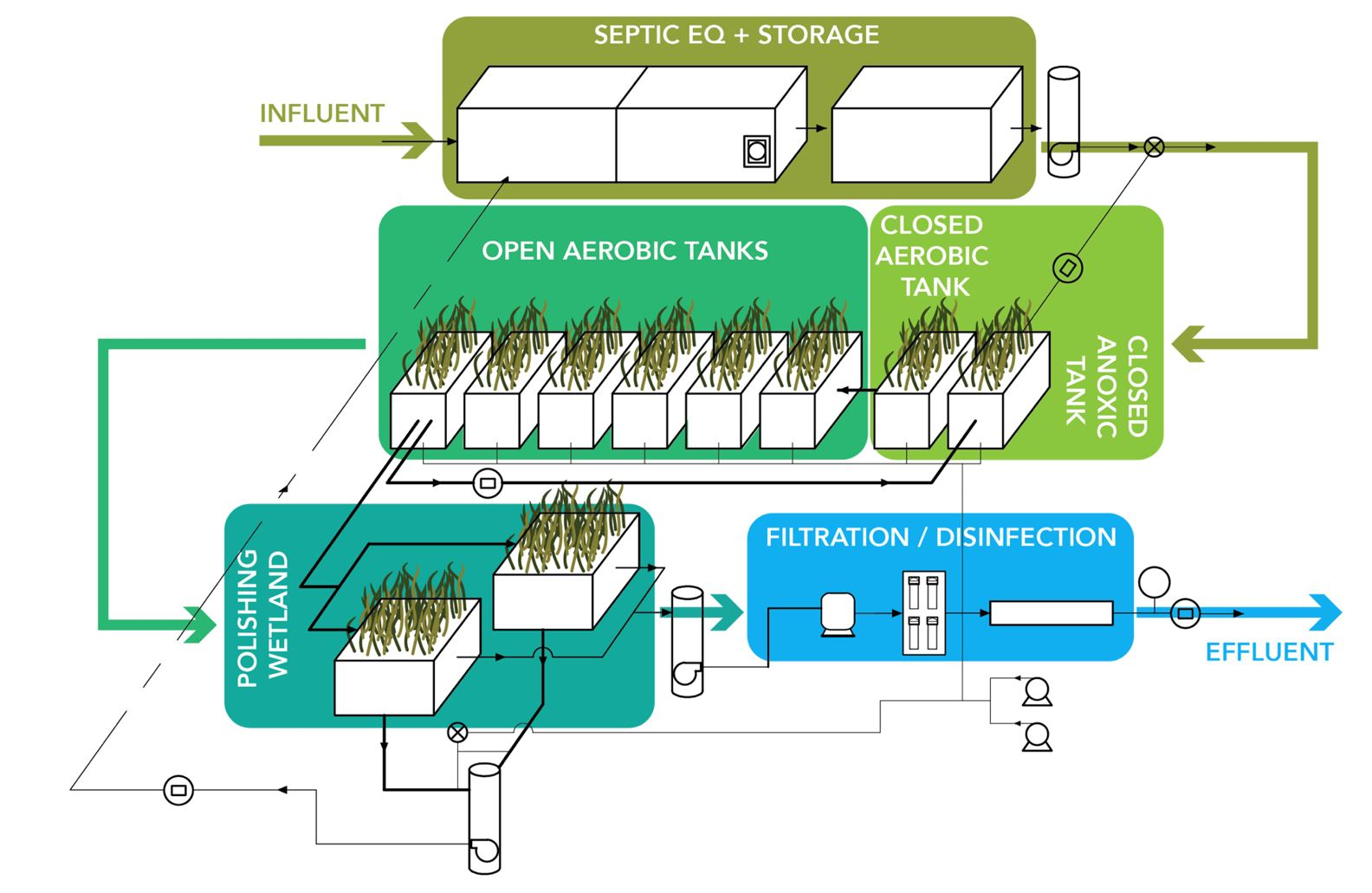 The open tanks and the polishing wetlands use plants for the treatment process; these plants are visible in the Denver Water administration building lobby. Finally, the water is filtered and disinfected before the effluent is routed to a holding tank for use either to flush plumbing fixtures or to be used for irrigation.

• Nonplant-based treatment. A few manufacturers are developing and producing nonplant-based blackwater treatment systems (see Figure 4). These are gaining more traction as the need for deploying water reuse systems increases — for example, in water-challenged areas such as California. These systems collect blackwater into a first-stage settling tank, with overflow to the municipal sewer, and then route the blackwater into aerobic screening, biological treatment, filtration, and finally disinfection before it is collected and reused. 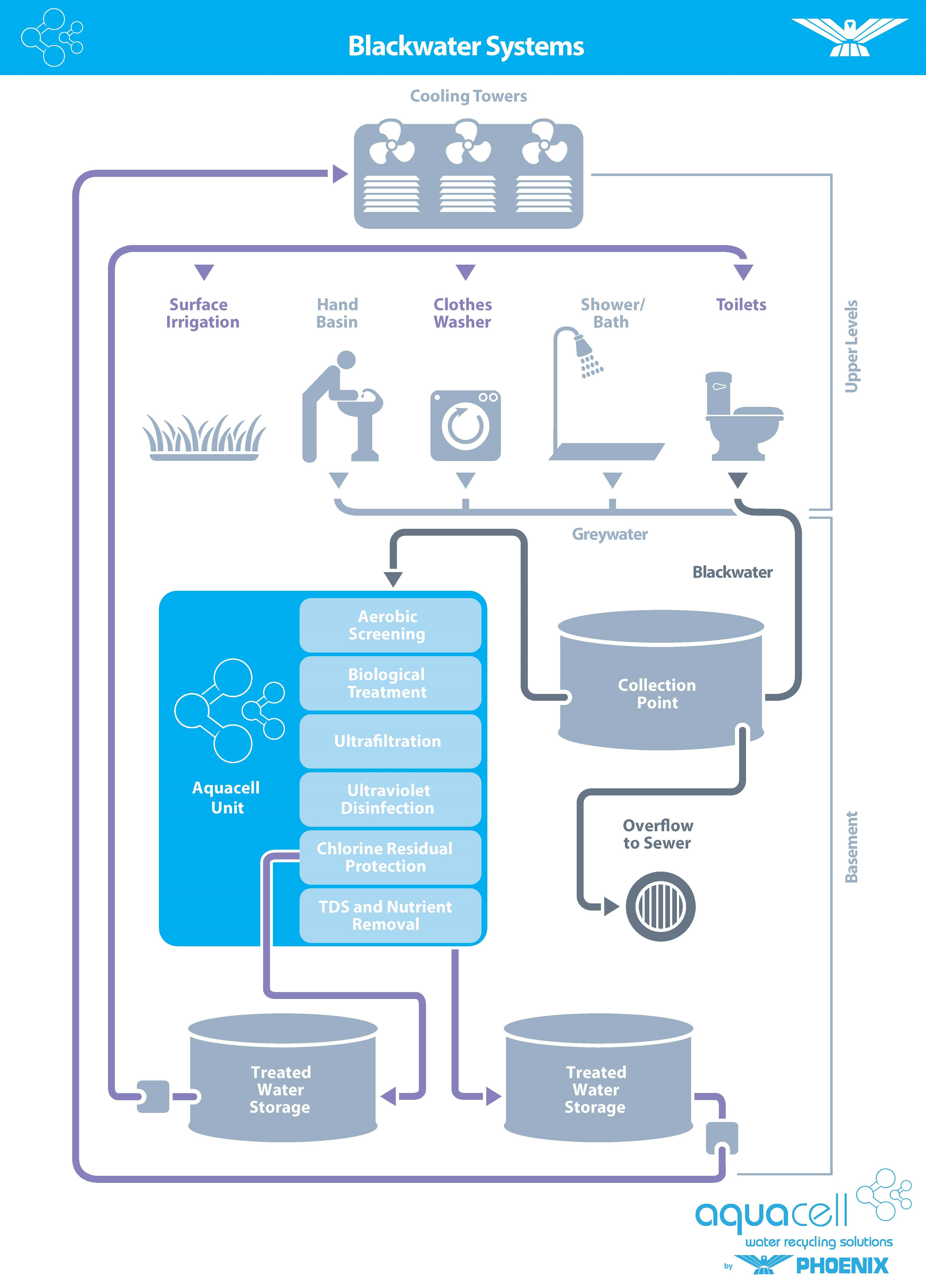 • Rainwater systems. Similar to greywater systems, rainwater systems are now covered in Chapter 13 of the IPC. In addition to some of the exact requirements as greywater, rainwater also must address debris excluders and first-flush diverters to address large contaminants, such as leaves, which may be present in the rainwater flow. For the Denver Water project, rainwater was captured off both the administration building roof and off the solar panels covering the top floor of the adjacent parking garage.

Rainwater reuse, like blackwater, is not without its fair share of regulatory issues. In Colorado, rainwater harvesting is significantly limited due to the water rights on this rainfall. Denver Water assigned water rights to the collected rainfall on this project.

One key aspect of implementing rainwater reuse is water scenario modeling to help determine storage tank size. For the Denver Water project, multiple scenarios with various levels of landscape quality and demand satisfaction were reviewed; one example of that modeling is shown in Figure 5. 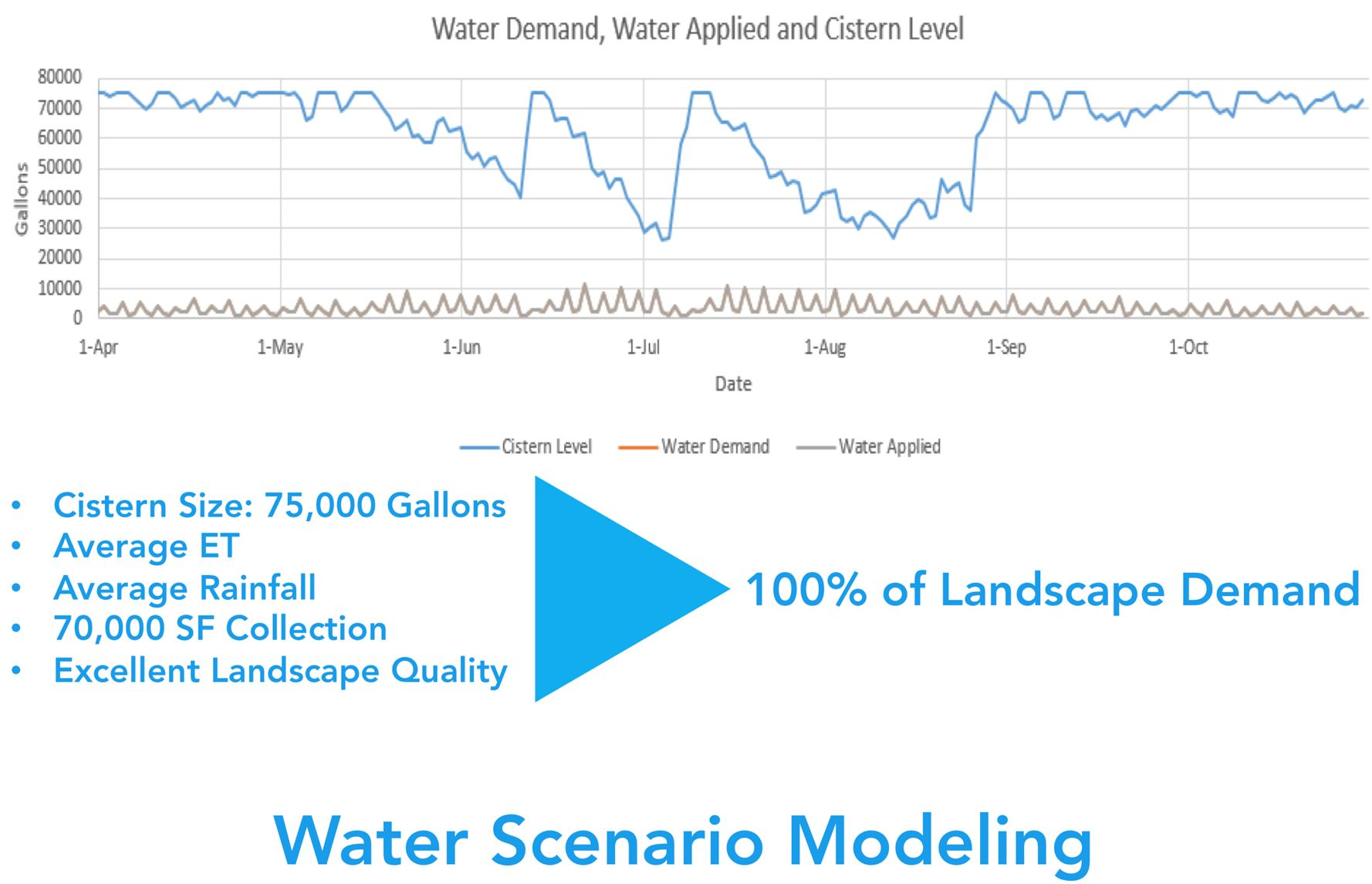 Numerous requirements must be evaluated and implemented to ensure the proper operation of the systems.

In addition to high-efficiency plumbing design, the implementation of reuse systems can drive overall water consumption to very low levels compared to similar building types. However, the owner must define goals at the outset of planning so that the challenges of implementing the reuse systems can be tackled early in the design process.

Implementing these systems is a team effort, and the plumbing engineer needs to engage specialty consultants and work closely with the owner, architect, contractors and other consultants to ensure a successful outcome.

Ken Urbanek, PE, is a principal and client executive of IMEG Corp., where he oversees the firm’s Denver office. He has a broad design and construction background that includes specific expertise in high-performance building design, including campus distribution systems, radiant cooling, under-floor air distribution, chilled beams, geothermal, variable-refrigerant flow systems, and water-efficient plumbing systems. He served as principal in charge and the mechanical engineer of record for the Denver Water Operations Complex Redevelopment.

Walker Jones, a senior mechanical engineer at IMEG Corp., contributed to this report.

Showrooms Engineers & Specifiers Green Building Plumbing Projects Water Quality
You must login or register in order to post a comment.