Free Subscription
Home » What Happens to Plumbing When the Building Leans? Part 2
Feature

What Happens to Plumbing When the Building Leans? Part 2

A case study of how soil settling caused extensive damage to a new institutional structure.

In Part 1, published in this magazine’s February 2022 issue, we talked about why buildings lean, how this phenomenon affects plumbing systems and drain lines, and how low-flow fixtures compound this problem. This month, we’ll look at an institutional building’s soil-settling problem.

Many years ago, I received a call about a new facility that was experiencing some serious plumbing problems within a year or two of opening. In this case, the ground was settling, not the building. They said the buildings’ structure and foundation were stable, and the ground under the floor slab in parts of the building was settling.

As it turns out, the construction logs and interviews and depositions of the workers indicated there were shortcuts taken when they were backfilling around a two-level basement with a utility tunnel below. Some areas had backfill along the basement and tunnel walls, which were to be located under the building with a slab on the main level, of about 30 feet.

The engineers’ specifications called for backfill in small lifts or layers of 6 to 8 inches with compaction of 95 percent after each layer of engineered sand fill was applied. To speed up the construction process, someone decided to allow front-end loaders to dump the excavated backfill into the excavation instead of clean sand fill with compaction. The clumpy clay and loam fill were deposited, then the front-end loader drove over it a few times to try to
compact it.

No vibrating compactors were used, according to depositions of the field engineers. Engineered clean sand backfill should have been used and compacted with a vibrating compactor as each layer of backfill was added under the building. The soil should have been tested to confirm the backfill met the engineers’ specifications, but this was not done to speed up the construction process.

If not improperly compacted, backfill or backfill contaminated with organics or clay could result in settling, which could take with it any utilities in the area such as drain lines, sewers, water lines and electrical conduits.

In this institutional building, after the backfill was improperly placed, the underground utilities were installed and the floor slab was poured over the area. Over time, the soil settled away from the slab-on-grade, causing the ground to settle enough to pull apart some sanitary drains leading from some large public restrooms above the settling soil area. After the sanitary drains separated, water poured into the void space beneath the floor slab and accelerated the settling of the soil.

The soil in some areas had settled almost 2 feet under the slab-on-grade floor. The floor was not designed to be a suspended slab, so cracks appeared in it and the tile as the concrete floor began settling. The resulting settling also took with it sanitary drain piping that separated at hub-less connectors — allowing for a free-flowing waterfall of almost 2 feet of sewage from one end of a vertical pipe to the other.

The wastewater flow mostly missed the pipe below because a vortex formed, which swirled the waste in the pipe. When it reached the opening, the centrifugal force sent the water outward as it fell through the almost 2-foot void space. As the soil and the drain pipe settled deeper into the improperly compacted soil, it caused reverse slopes or uphill portions of the drain pipe — causing drains to stop flowing properly.

The settling also took with it electrical conduits and separated water pipe, causing a cross-connection between open waste and water piping. The water intrusion in the settling soil further accelerated the settling and caused cracks in foundation walls, water intrusion into a lower basement wall area and leaks in the utility tunnel below. In addition, there were some underfloor water-pipe-to-trap-primer connections in public restroom floor drains above the now suspended slab-on-grade that also separated. 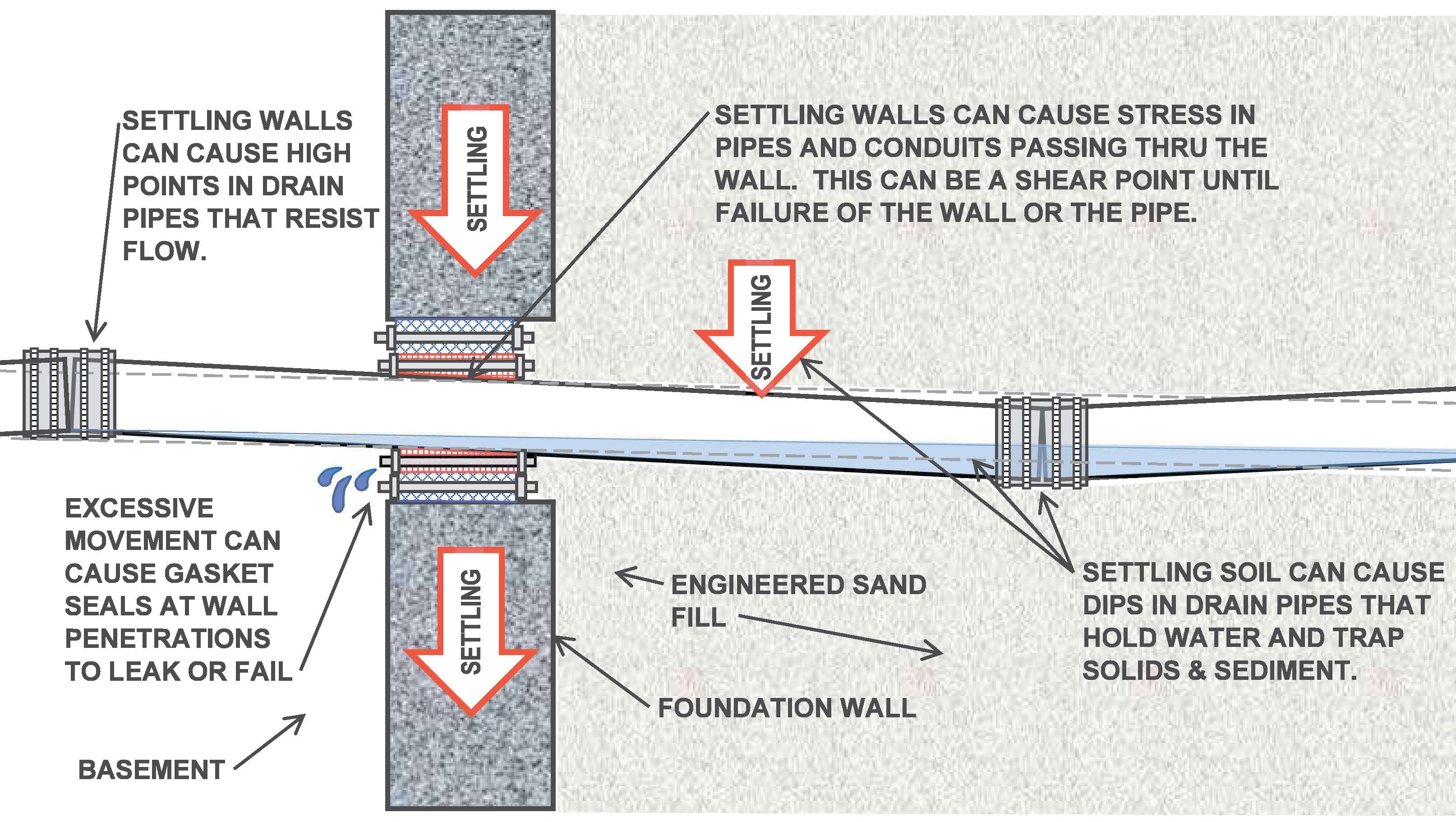 This all occurred in a relatively new building constructed for hundreds of millions of dollars. Since the building was already operational, the lower floor needed to be shut down. There would be a loss of income from shutting down revenue-generating spaces and relocating staff and procedure spaces. Emergency meetings were held; many options were presented to address the situation while minimizing the impact.

Inspection holes in a few key locations were drilled to find out the extent of the affected underfloor area. They discovered a large void space below the floor, which grew in depth as it got closer to the foundation wall that went to two lower levels and a utility tunnel. Eventually, they decided the settling had slowed after the soil in the area was saturated from the water.

One solution was moving everyone out of the affected area, removing the entire floor slab and trenching to install new drains in these areas. However, it was considered too expensive and too disruptive, so they decided to pump in a slurry to fill the void spaces under the floor and hydraulically fill the under-slab area, then monitor it in case of further settling.

The existing underfloor drains had settled so far, they were sloping uphill in many areas and the underground drains were not re-useable. To resolve this issue, a vacuum waste system was installed in the affected area. There were a few mechanical spaces with enough space for the vacuum waste pumps and a receiver; the smaller vacuum waste line went up in partitions behind vacuum water closets.

For this building, just as the leaning tower of Pisa, the contractor and field engineer did not consider the soil conditions and what settling could do to a building. They did not properly backfill and compact the soil within the building footprint, where there had been deep excavations near what was to be slab-on-grade areas.

Many building utilities enter a building through an oversized hole or sleeve formed in a concrete basement wall. The annular space around the pipe is often sealed up with rubber or synthetic gasket materials — rubber or synthetic links that seal like a gasket or collar around the pipe in the annular space or the opening in the foundation wall. These gasket chains are installed and compressed with washer plates; the gasket chains expand and fill the void around the pipe, creating a watertight seal.

Sometimes concentric rings of rubber or synthetic gaskets links are used to seal the space between a pipe and a foundation wall to prevent groundwater intrusion; they can allow for a few inches of settling or movement. If a building settles significantly — more than a few inches — the wall penetration can act like a see-saw. This can cause a deflection in the pipe inside and outside of a building wall.

Stress can build up at these shear points where a building foundation is settling, and they can rupture or crack a pipe or conduit at or near a wall penetration or cause the pipe to have a reverse slope. Ideally, the waste line leaving the building should drop and offset in the basement near the outside wall, allowing for some movement and adjustment of a vertical pipe inside the building (see Figure 1).

A cleanout should be located in the building on the floor above, about a foot above the exterior manhole elevation in the street, so it can be removed when a street sewer is backed up. This prevents a condition that allows all upstream waste to drain into a basement or lower level of a building.

I investigated a building where a cleanout was located in a basement below the street manhole. When the drains on the lower floor backed up, the building maintenance man removed the basement cleanout; the entire 12-inch combined storm and sanitary sewer system drained into this multimillion-dollar facility. It flooded the basement mechanical rooms, the electrical and mechanical equipment and all the special purpose rooms on that level. The cleanout on an upper level above the manhole elevation would have prevented this flood.

For pressure water pipe, a ruptured water line can flood a basement and take out critical utilities in the basement and lower levels of a building. Swing joints or expansion loops or offsets should be looked at if significant settling or movement is a concern at foundation walls.