The Evolution of Sump and Effluent Pumps

Improvements were often been driven by the people who knew these products best: plumbers and engineers.

For more than 100 years, submersible pumps have been changing the way people move water, waste and liquids. Today, they’re an essential part of countless different types of residential, commercial and industrial operations, pumping a steady stream of reliability and providing solutions to meet even the most challenging user demands.

And, as most professionals know, these pumps have come a long way over the years. In fact, the modern submersible pump has evolved significantly since it originally hit the market in the early 1900s. This evolution has often been driven by the people who know these pumps best: plumbers and engineers.

Let’s take a closer look at how submersible pump technology has expanded over the years and how installers and users have benefited from each innovation. A little history proves that user needs and problem solving have always been the catalyst for change and innovative product design.

Arutunoff’s journey to innovation began in 1916 when he created a centrifugal pump design that could dewater mines and ships using a motor running at very high speeds. He believed that the electrical transmission of power could improve the antiquated methods he saw in use in oil drilling during the early 1900s in Russia. Arutunoff’s design was small in diameter and built with stages to achieve high discharge pressure. It was the result of trial and error – and practical problem solving.

Although Arutunoff built his first centrifugal pump while living in Europe, his invention would soon come to America. After immigrating to the United States in 1923, Arutunoff sought financial backing to manufacture his pump design. In 1928 he met Frank Phillips, head of Phillips Petroleum Co., and received the financial support he needed to bring the submersible pump and motor technology to oil producers in the United States.

From oil to water

While Arutunoff’s technology is still in use today, it’s also evolved to cover more industries.

In the 1940s engineers realized that the technology used in oil production could also be applied to a growing need: pumping clean water for industrial and residential use.

A popular story about one of these innovations involves a plumber, R.M. “Doc” Wolfe, who began installing a new luxury in homes: air conditioning units. Each unit had a pump to get water up into a screen for evaporative cooling. Every time Wolfe fixed one of these pumps, it would break again. He enlisted the help of inventor Harry Goodman to engineer his solution: the world’s first evaporative pump. In 1941, the Little Giant Vaporizer was born. [EDITOR’S NOTE: We covered more details on Little Giant’s long history in our November issue, which you can read here: bit.ly/3nw9aFn.]

As any water professional knows, clean water supply or movement is only half of the equation when it comes to water management. Wastewater removal is just as critical. The post-WWII era led to suburban growth – and created the need for 2 and 3-inch solids handling as well as sump pump solutions.

Across the country, wells and septic systems were becoming more common as residential growth extended beyond city centers. Basements across America were also being put to new use, becoming “livable spaces” with basement bathrooms more commonplace.

These changes and more meant the need to lift a home’s sewage up and out – and a pump was the answer. In the mid-1950s, the submersible sewage pump first entered the market helping to meet these growing demands.

By the late -1950s submersible effluent pumps took waste removal a step further. They provided increased head for applications like septic tanks with up to three-quarter inch solids and where large solids handling was not necessarily needed. Equally important was the addition of sump pumps for generally clear wastewater removal for residential and commercial below-grade areas.

As home aged during the 1980s, new pumping needs emerged.

Older concrete sump pits began to deteriorate, creating performance issues for strictly clear water pumps. This aging infrastructure created the need for a “heavy duty sump pump” – something that could handle small solids of up to a 1/2  inch, but do so without the need for the large motor required for a full effluent system.

As a result, pump manufacturers began to develop hybrid systems that could fill the market gap between small pumps and powerful effluent. Submersible hybrid sump/effluent pumps proved a cost-effective and “right-sized” solution where light solids handling was needed but extremely high performance and associated cost was not. 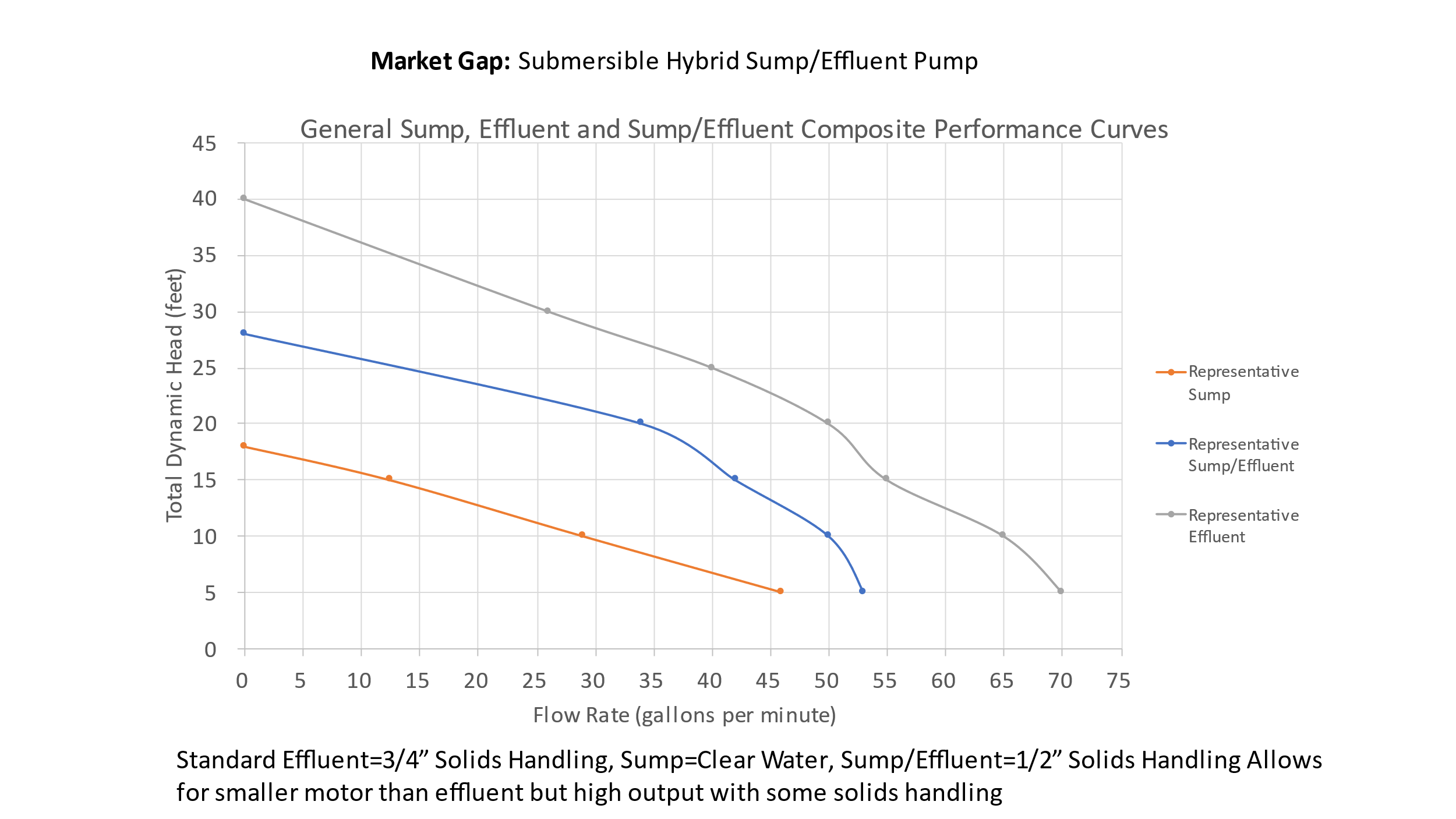 The development of hybrid systems opened the industry up to additional pump innovations throughout the 1990s and into today, and these innovations continue to be designed around installer and user needs.

For example, population centers throughout the United States continue to shift and infrastructure that was once adequate needs updating. Previously undeveloped areas are seeing tremendous growth in both commercial and residential building, and these areas often cannot accommodate a gravity sewer network or centralized treatment plant.

Also, waterfront properties with septic waste treatment systems are feeling their age. Low-pressure sewers have been providing the answer, becoming especially important in rural areas, hilly or mountainous terrains, wet and lakefront properties. In areas like these it is often not safe to use septic tank waste treatment systems (that can fail and pollute ground water and recreational water) and gravity waste drainage systems can overly impact the environment, do not exist or are too costly to build.

Low-pressure systems, in contrast, require pumps with high pressure output that can still handle raw sewage by grinding everything into a sludge and then pumping it away.

What’s next? Like so many innovations, the birth of the submersible motor pump started with a problem. Continued problem-solving will likely lead to new solutions that help contractors, distributors, and homeowners around the world move water in the smartest ways possible.