Free Subscription
Home » Can America Lead the World on Climate Solutions?
The Future is Now

Can America Lead the World on Climate Solutions?

The U.S. Aim Act, the Kigali Amendment and a successful return to natural refrigerants mean we are back on track to battle global warming.

For more than 100 years, the United States has been a global technology leader and, for much of that time, the world’s biggest economic powerhouse. But doubts have crept in recently as America has focused more on its own challenges than those facing the Earth as a whole, established geopolitical patterns have been upended, China has risen, and alliances have evolved.

In addition, despite the fact that climate change is a science and engineering problem caused mostly by human technological practices, it has been transformed into some kind of political discussion by powerful energy industry players and protectionist governments. The growing impact of the information age, the Internet, social media and mainstream media fragmentation have added to the confusion around what should be a simple set of engineering solutions implemented by countries working together, led by America.

With the southwest in permanent drought; West Coast wildfires; millions of acres in flames in Siberia, Greece, Italy and Spain; floods in 16 states, China, the UK and Europe; glaciers melting; Gulf Stream anomalies; the fear of a continuing series of pandemics — it has never been more urgent that we come together on climate change. But can we? 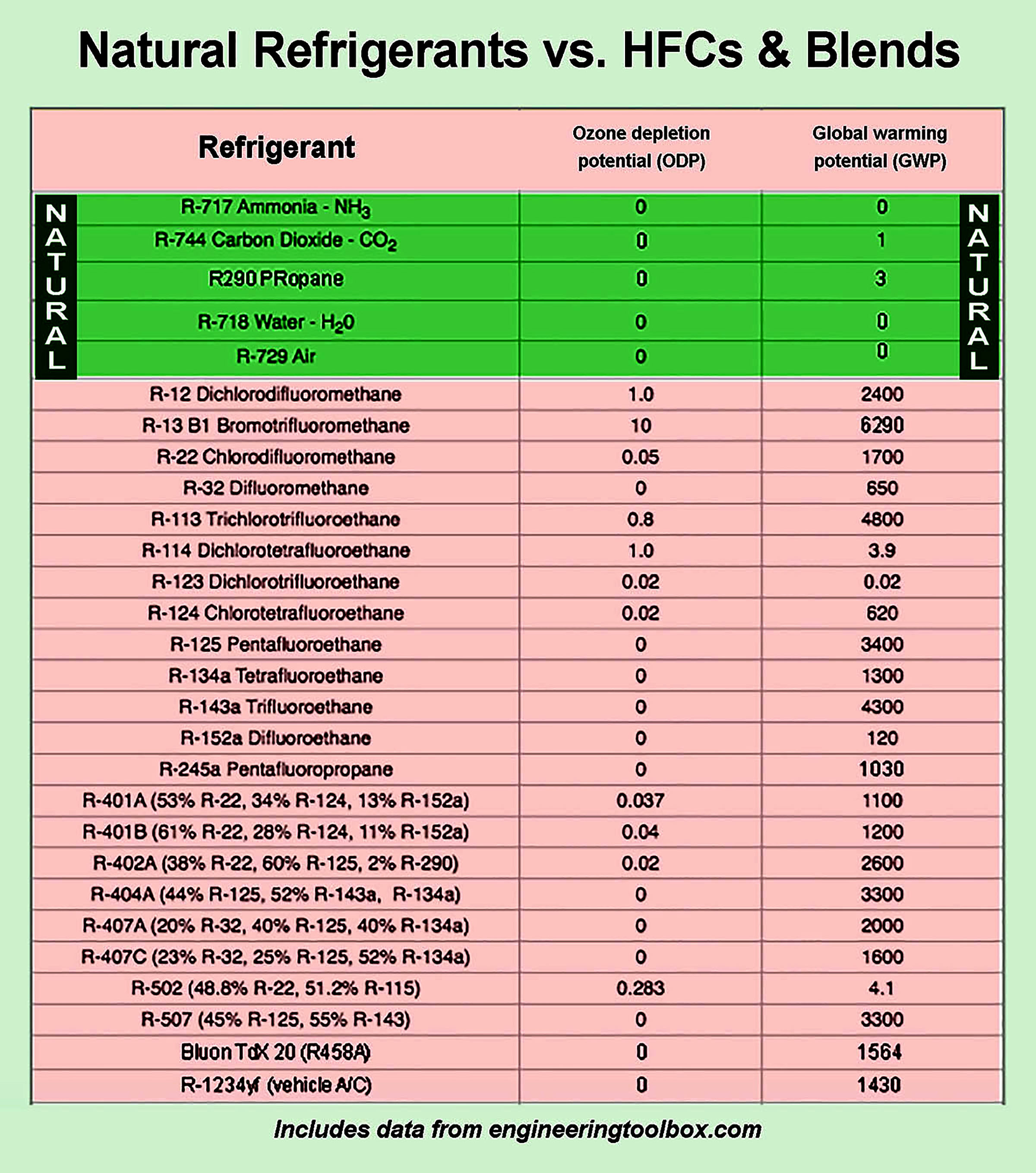 By the time you read this, the UN’s COP26 climate talks (https://ukcop26.org/) will have concluded, likely with much fanfare. I’m writing this before they start and feeling a bit cynical. Countries such as the United States, the United Kingdom and China will likely create a goal to cut methane emissions significantly by 2030 and declare the talks a success.

The United Nations might say we achieved some hopeful progress but not enough, and environmentalists will say it was mostly photo ops with inadequate commitments.

The Montreal Protocol: A Global Collaboration

No matter how COP26 might be framed in various reports, it’s good that countries come together and acknowledge what many of us know is true (according to polls) — climate change is a big problem that needs solving. There are loud, well-funded voices saying we should go slow or can’t solve it, but historical precedent shows we can defeat global problems.

We battled the rise of fascism in the 1940s, the energy crisis of the 1970s, Y2K, the financial crisis in 2008, and we have done very well with the Montreal Protocol. It has shown we can solve big environmental problems and how important engineers and scientists can be in these efforts. The HVACR industry, in particular, has played a starring role in the success of the Montreal Protocol and now the Kigali Amendment.

The original Montreal Protocol (https://bit.ly/3jGCI1V) was created in 1987 due to a hole that opened up in the ozone layer of Earth’s atmosphere above the South Pole. This atmospheric layer helps protect life here from being burned up by the sun. Scientists indicated the hole would continue to expand if the use of damaging refrigerants was not curtailed. The world came together and 197 countries signed the Montreal Protocol.

This resulted in about 30 years of replacing hydrochlorofluorocarbons (HCFCs) with hydrofluorocarbons (HFCs). And it worked. The ozone hole stabilized and then began to shrink. A few years ago, scientists reported that progress had stalled. Some illegal practices were identified in various countries, halted by their governments, and the most recent news from NASA is that ozone improvement is continuing.

The Kigali Amendment recognized that although HFCs were better for our ozone layer, they contributed significantly to climate change. In late 2020, bipartisan legislation known as the AIM Act was introduced by U.S. Sen. John Kennedy, R-La., and U.S. Sen. Tom Carper, D-Del. It established a phasedown plan for HFCs and enabled a transition to “next-generation technologies.” 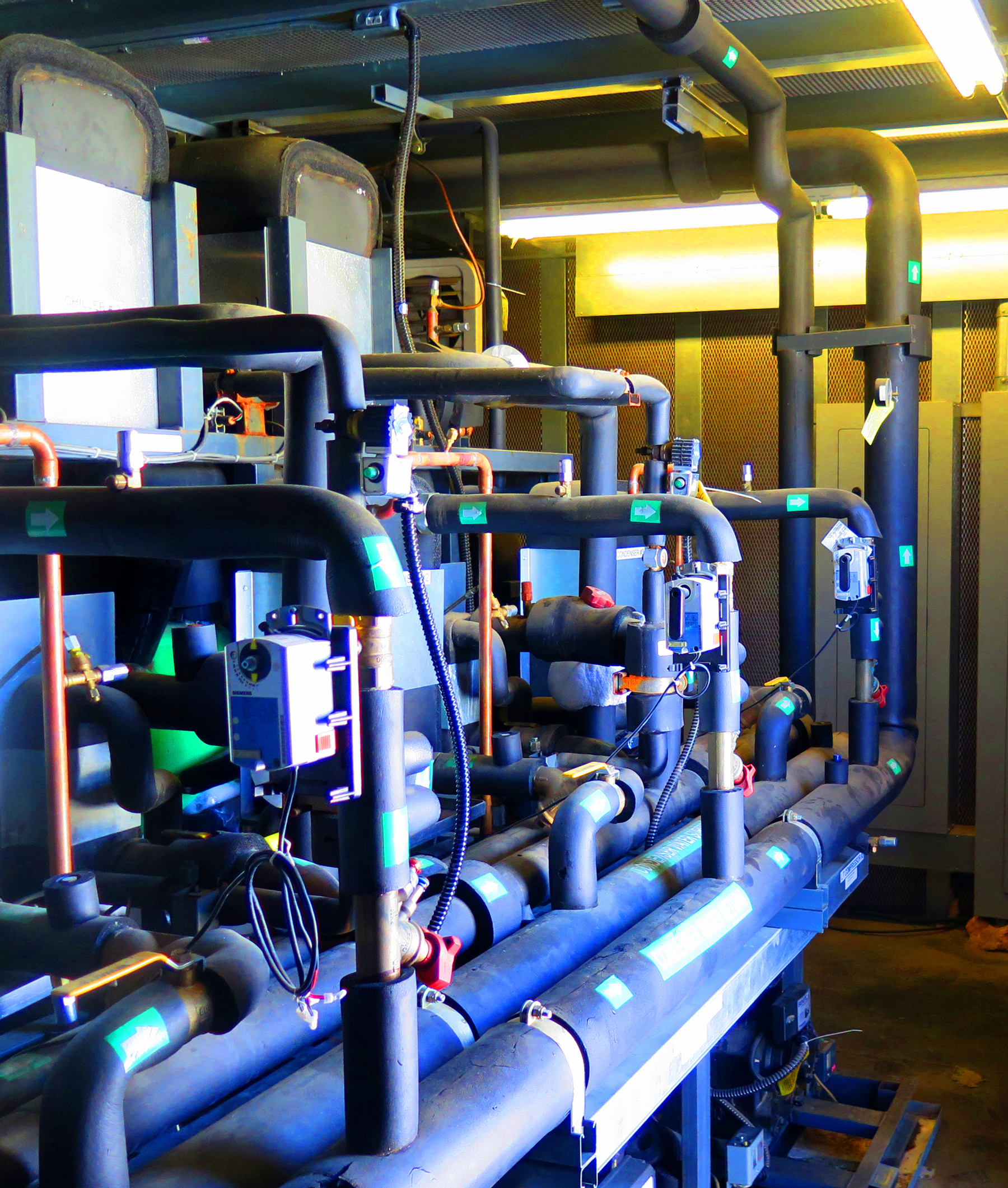 The AIM Act directs the EPA to phase down production and consumption of HFCs in the United States by 85 percent over the next 15 years as part of a global effort.

It wasn’t motivated only by concern for our home planet; America will benefit by re-asserting its leadership. Last year, the Air Conditioning, Heating and Refrigeration Institute (AHRI) and similar groups were pushing for national ratification, which had stalled after several chemical companies discouraged the Trump administration from moving on Kigali.

But equipment manufacturers worried they would lose market share and venture capital to foreign companies in the absence of harmonized standards, international leadership and a ready marketplace for the new technology. Distributors wanted a simplified supply landscape. Trade groups and installers wanted national rules, not state patchworks, and also finalized training directions.

Chemical companies were alone in their opposition because new technology has been moving toward the return of natural refrigerants such as C02, ammonia and propane rather than the expensive blended refrigerants the chemical companies developed. Many of these still carry high scores on either global-warming potential (GWP) or ozone-depletion potential (ODP), or both. They will now be phased down by 2036.

“American consumers are expected to benefit from transitioning from HFCs to environmentally safer alternatives and more energy-efficient cooling technologies,” the EPA notes. It estimates that cumulative net benefits will be $272.7 billion from 2022 through 2050 (https://bit.ly/2ZDFZrV). In 2036, the final reduction year, emissions will be cut by 171 MMTCO2e.

According to AHRI, American refrigerant and HVACR equipment manufacturers supported the AIM legislation to transition to next-generation technologies (https://bit.ly/3BmzQgz). “Studies forecast the overall contribution to the economy from the HVACR industry will be 2.5 million jobs and $621 billion in economic output by 2027,” it notes.

Chemical companies continue to repeat the narrative that natural refrigerants are problematic, which is based on grains of truth. They are flammable, the pressures are higher, and there are questions about safety and effectiveness.

A case can be made for each of these obstacles, but the reality is that it’s now old information. Examples of successful implementation with natural refrigerants continue to multiply; they are found all around the United States and in other countries.

In the last few years, we have published details on projects such as modern ammonia and heat recovery in arenas used by NHL hockey teams such as the St Louis Blues, San Jose Sharks, Anaheim Ducks, and Arizona Coyotes (https://bit.ly/3mnoHrH). Hundreds of thousands of R290 propane-based standalone refrigeration cases are being used worldwide by Coke, Pepsi, Unilever, Nestle, McDonald's, Aldi, Whole Foods, Target and Starbucks.

HillPhoenix of Georgia has supplied Advansor C02 transcritical systems to hundreds of grocery stores across the country, including numerous Walmart installs, 35 factories, warehouses and food plants in Wisconsin, Ohio and Nova Scotia, to name a few. The AHR Expo has given Danfoss some of its top innovation awards for C02 systems and products on several occasions in the last few years (https://bit.ly/3EoYGyf).

Dave Malinauskas, president of CIMCO Refrigeration, said to me last year: “I find it impossible to believe that there will be a law anywhere allowing refrigerants with ratings of more than 150 GWP within a short time. C02 is nontoxic, not flammable, naturally occurring, causes no ozone depletion and costs about a dollar a pound. Synthetics are $40 per pound. There are now about 30,000 transcritical C02 systems around the world.”

Another system has emerged from early C02 efforts that solves many problems — C02 combined with low-charge ammonia. Until last year I was not aware of how popular it has become all over the globe in a very short period (see map). 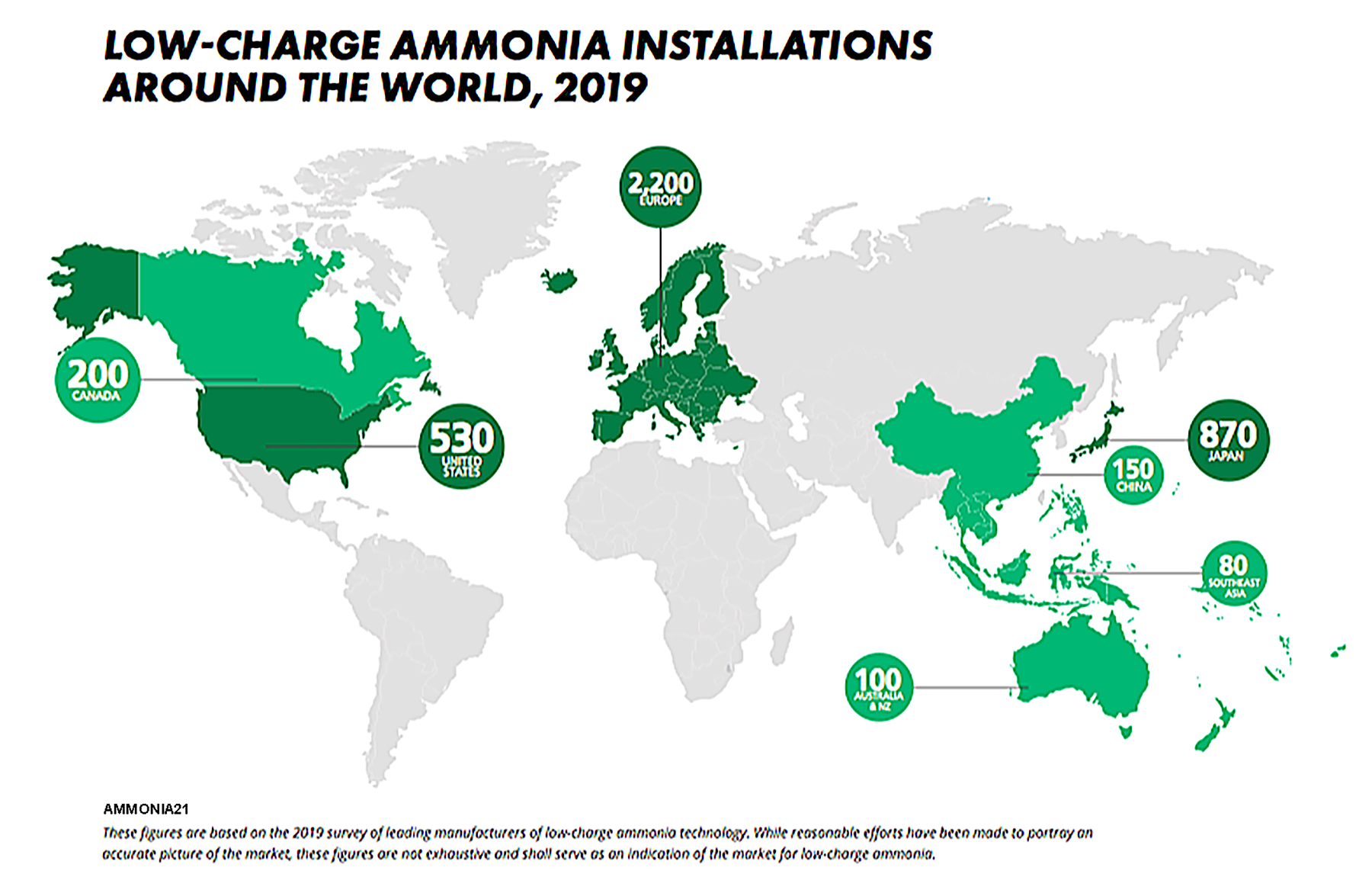 In addition, Sanden has supplied hundreds of C02 heat pump water heaters to residential and commercial customers all over the United States. The first C02 heat pumps for air conditioning are now beginning to be introduced in North America.

I hope events such as COP26 will help catalyze a faster transition, and these global efforts will all be led by a resurgent technology leader taking its traditional position at the front of the pack — the United States of America.