Docuseries spotlights contractors all while underscoring the need to attract the next generation to the trades.

Pfister launched a biweekly digital docuseries called “American Plumbing Stories,” earlier this month available at www.AmericanPlumberStories.com. The series features engaging profiles of plumbing contractors throughout the United States. Each profile relates how the contractor got into the profession and also highlights some interesting activities these successful PHCPPros have on the side.

While each profile is solid content, the Pfister campaign is also tackling the larger issue of the industry’s labor shortage and aims to promote the plumbing trade to the next generation with other activities tied into the campaign, including education assistance and mentorship opportunities.

“We need to dispel misconceptions by telling the stories of real-life plumbers and how they got started in the trade,” says Spencer Brown, director of sales for Pfister. “We started this whole process by telling ourselves we needed to ‘inspire, educate and entertain.’ The stories show how these contractors built a career that allows them all to lead rewarding and fulfilling lives.”

Brown, who’s spent his entire 22-year career with Pfister, knows many of the plumbers profiled in the series. In fact, far from sitting at the Pfister home office in Foothill Ranch, California, Brown has “executive producer” credits on the series and has been traveling around the country with the film crew leading the interviews.

“In my time in the plumbing industry with a plumbing manufacturer,” Brown adds, “I know that this industry is a tremendous long-term career for any young man and woman. I hope that with this series we can engage young people by sharing an authentic look at the plumbing trade today and encourage the next generation to join and ensure the future of the plumbing industry.”

Initially, a dozen episodes will be released over the course of the next six months, with Pfister already planning more profiles after that.

We got a sneak peak at the first video on Ken Clark, Clark Plumbing, who employs around 40 from offices near Jackson, Mississippi.

As he got older, his dad gave him a truck and told him, if you wanted money, you could.

We also meet his dad in the video.

“He likes plumbing kind of like me,” adds Doyle Clark, 81. “I’ve been doing it ever since I was 25 years old. I’ll probably retire when I’m six feet under.”

The video also features his sons, plus another employee who’s been with Clark for 30 years.

“His dad and my dad were friends and his dad called me and said, put him to work,” Ken adds. “I picked him up in the morning for his first four years.”

If anything, his employees wished he’d “chill out a bit.” Good luck with that because Ken is well known on the Street Outlaw Racing circuit. Google the White Zombie and you’re likely to find information about his 1967 Chevy Nova outfitted with a nitrous-fed 632 cubic-inch Reher Morrison Racing engine. The car even has its own Facebook page: bit.ly/3xEFwl5

“We’ve run quite a few races,” Ken adds. “I love to leave on a Friday night and be back to plumbing on Monday.”

Each episode also highlights the true opportunity the plumbing trade has to offer those who don’t want to pursue a college degree or who are unsure which career path to take.

“Becoming an ‘American Plumber” is a true alternative,” Brown adds. “By foregoing student loan debt and entering a career early, young professionals can build a tremendous life for themselves and their families.”

Pfister also partnered with chart-topping country music star Craig Morgan to host each episode. Morgan also wrote and performed the docuseries’ theme song “Good Life”, which can be downloaded for free from www.AmericanPlumberStories.com.

The song begins with these lyrics: “Some days I’m working before the sun kisses the sky/Watch the world wake up from the seat of my truck/I’m out here earning my piece of the pie/A good honest buck/No, it ain’t luck.”

Since releasing his debut record in 2000, Morgan has dropped eight studio albums and charted 15 Top 20 singles.

“I was very excited when Pfister approached me about this project,” Morgan said in a press release. “I am glad to help shine a light on the trade and see what Pfister is doing with American Plumber Stories to help inspire a new generation of plumbers.” 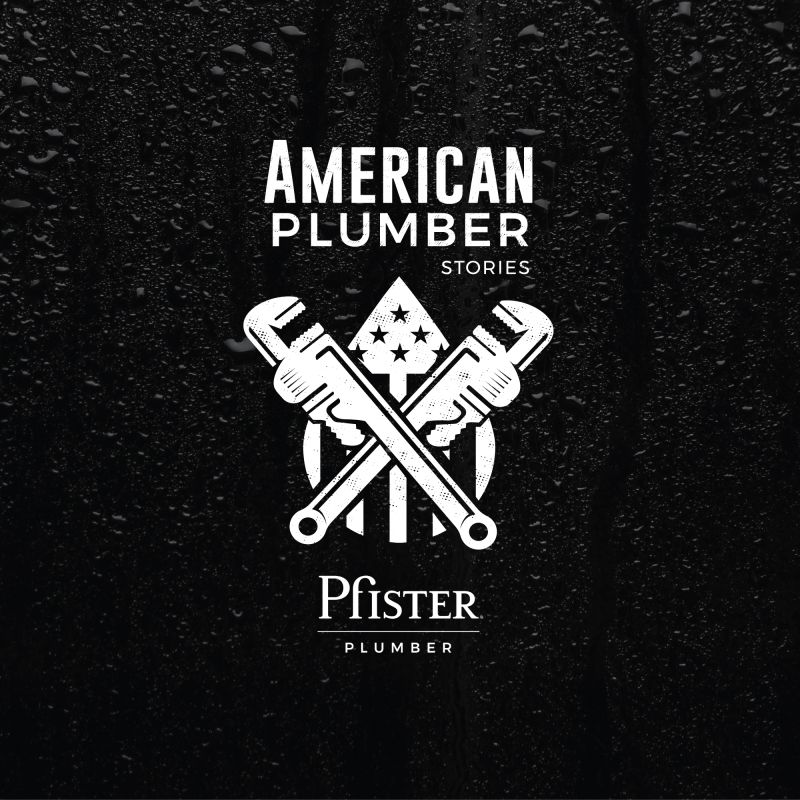 Prior to his music career, Morgan spent 17 years serving the country in the Army and Army Reserves. Morgan remains an avid supporter of America's military personnel and has made 16 overseas trips to perform for our troops.

He is a recipient of the 2006 USO Merit Award and in 2018 was awarded the Army’s Outstanding Civilian Service Medal, one of the highest awards the Army can bestow upon a civilian, in recognition of his significant dedication to our military men and women around the world.

Pfister has more in store to promote a career in the trades. In our September issue, we’ll have a full Q&A with Brown and be able to tell readers more about a partnership with a major construction trade association that will channel money into a national skilled trades education fund. Pfister is also continuing to work on a mentorship program to pair up students with contractors. Also, Morgan will also be the star attraction at The Builders’ Show in Orlando next February.

The company has a long history in the plumbing industry and was founded by Emil Price and William Pfister in 1910. In 1941, Isadore Familian bought the business. Isadore’s father founded Familian Pipe and Supply Co. in Los Angeles.

For a long time, the company was well known for its tag line: “The Pfabulous Pfaucet with the Pfunny name. After a series of acquisitions, today, Spectrum Brands Holdings Incorporated Hardware and Home Improvement Group owns Pfister. Visit www.pfisterfaucets.com for information.

American Plumber Stories can be watched at www.AmericanPlumberStories.com.