Oh, Say Can You See

A passion for giving back is making a significant impact inside and outside the channel.

Recently, a post on LinkedIn from Mike Stillwell, president of Omaha (Neb.) Winnelson Co., caught my eye. He posted a picture of artwork for sale — it was in the image of the American flag, created by Jeremy Walz, director of health and safety for Snell Services, a contractor based in North Platte, Nebraska.

The artwork was customized with a company logo and available for purchase at Stillwell's Omaha Winnelson showroom. It caught my eye because it wasn't a product promo; it was a beautiful interpretation of the American flag. Instinctively, I knew there had to be more to the story, so I phoned Stillwell to hear how the flags came to be and his connection to Walz.

What I heard was a beautiful story about partnerships and giving back. It’s an extraordinary glimpse into the lives of two individuals who are passionate about the industry, their community and selfless acts of kindness and patriotism. It’s a story about the heart of America. 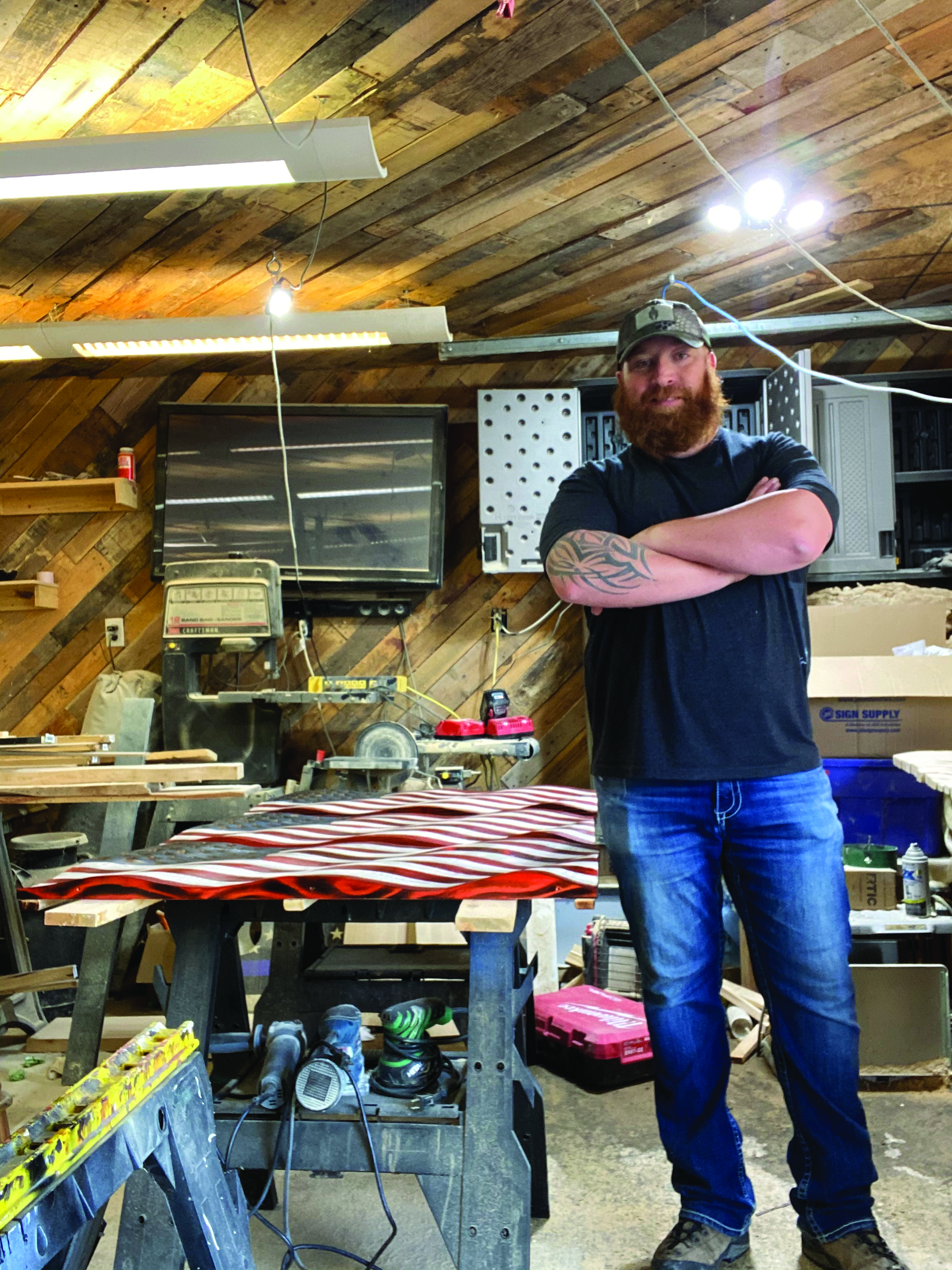 Stillwell is a man passionate about developing relationships that help others on their road traveled. Having graduated from the University of Nebraska at Kearney with a major in industrial distribution, he started his career working within the channel in 2003. Living in middle America, Stillwell inherently understood his ability to develop and build relationships with people; it’s in his DNA and would serve him well in connecting to his community and business.

He parlayed his skills into a career and connected with a small Omaha Win company in early 2009. "I enjoyed working for the company as an outside salesman and developed the relationships that helped grow the business," Stillwell says.

So, in 2018, when an opportunity presented itself for Stilwell to become president and owner of another Win company in Nebraska, he jumped at the chance. “I moved my family to North Platte, Neb., and took over a struggling company that needed a jolt," he recalls.

His love of community — including the community of industry —  helped him change the company's culture and nearly doubled the company’s size in more than two years. While there, he became acquainted with Jeremy Walz, who works for Snell Services, a family-owned commercial and residential contractor business also headquartered in North Platte.

Walz embodies the core motto and value of his company, stated on its website: "First and foremost, self-performance remains the foundation of our business. Snell Services Inc. believes our hands-on approach, our passionate belief in our people, a desire to build relationships based on trust and integrity, and a deeply felt obligation to give back to our community ensure quality performance."

As a contractor, Walz relied upon Stillwell and the team at WinSupply for its specialty is serving its customers of plumbing contractors, re-modelers and mechanical contractors.

"We cater to the one-person shops as well as the large mechanical contractors — and can handle everything in between. Our team has the experience and are experts at what they do," Stillwell says, noting that is how he and Walz formed their connection. "Jeremy and I worked on several jobs together, and we became friends."

At the time Stillwell was running Winsupply in North Platte, Walz was an estimator for Snell Services in the plumbing and HVAC division. He and Stillwell had gone to a meet-and-greet over lunch, and the two discussed upcoming work that Walz had.

The discussion naturally turned to golf and hobbies. "I showed Mike pictures of my flags that I had on my phone, and he asked if I could put his Winsupply logo on one,” Walz says. “I did one for Mike, and when he hung it up in his showroom, people commented on it. He bought several more over the next couple of months for customers and other Winsupply companies.”

"I started having great reactions to people seeing them; other Win companies, vendors and friends thought maybe I could help him sell them,” Stillwell recalls. “North Platte isn't exactly a metropolis with a ton of business, so you have to be creative in what and who you sell when trying to grow a business. I thought it could be mutually beneficial; Jeremy agreed."

Which is how it came to be a post on LinkedIn. But how did the artwork come to be? It is a story of an incredible selfless giveback — to help others.

One day in 2016, while scrolling through Facebook, Walz saw a post from a local family raising money due to a medical hardship. While he didn't know the family directly, their story touched him. "I wanted to help in some way but didn't know how I could,” he notes. “I am very patriotic and was considering making flags as art. That is when I decided to try and put the flags into production and see if I could raise money to benefit the family."

"I created a few designs, then contacted the family and asked their permission to make flags for sale, with 25 percent of all sales going back to them," Walz recounts. They agreed, and Walz raised a considerable amount to donate, which only   fueled his love for giving back and doing more. "Since then, I have donated flags to other families, donated flags for silent and live auctions," he adds.

The organization also assists veterans returning home from combat with transitioning back to civilian life.

Walz's flag art includes the Second Amendment, Pledge of Allegiance, the preamble to the Constitution and other patriotic sayings; he can also incorporate company logos into the art pieces.. The flags are all handmade by Walz; he purchases all the pinewood lumber, cuts the boards to length, and hand paints and engraves each as specified by the customer. The original design is 19 1/2 inches by 37 inches, but Walz has made custom-order sizes of 3 feet by 5 feet and  5 feet by 8 feet.

"Mike Barker, CEO and president of Heroes Sports, and I became friends through mutual friends during the pandemic,” Walz says. “When I heard what his organization did, I contacted him and said I wanted to help somehow. I am not ex-military; it is one of my regrets. I didn't serve my country in battle, but if this can help those that do, then it is something I want to continue doing. I am very patriotic and support the troops, veterans, first responders. Everything they do and have done gives me the freedom to do something I am passionate about and owe them.”

Supporting community, employees and fellow men and women are in the DNA of Walz and Stillwell. For more information on connecting with Walz, he can be reached via email at jwalz6745@gmail.com or on Instagram: @jeremywalz81

As for Stillwell, he will continue on his journey to help others. "I am so proud and humbled to have been able to lead two teams in both Omaha Winnelson and Winsupply of North Platte,” he says. “I would not trade any member of those teams for anyone else; they all put their faith in me and the direction we decided to go, and we all pulled in the same order, and we hit our goals. #NEXT”