Last September, 14 St. Louis-area men and women graduated from the initial six weeks of a year-long pilot program and are all currently holding down full-time work as pre-apprentices at several member businesses of the Mechanical Contractors Association of Eastern Missouri and the Plumbing Industry Council.

The pre-apprentices are the first cohort in a joint initiative dubbed “CHAMPIONS” (Creating Hometown Advantages through Minority Participation in our Neighborhood) designed to enhance diversity in the PHCP trades within the city and strengthen the Local 562 workforce.

“We aimed to demonstrate the tremendous career opportunities available within the plumbing and heating market to a broader audience, focusing on women and minority residents of St. Louis City,” says Carly Carmosino, program manager at the Mechanical Contractors Association of Eastern Missouri.

With skilled plumbers and pipefitters in short supply but high demand, the CHAMPIONS program offers a fast track to the profession with the ultimate goal of enrolling in Local 562’s five-year apprenticeship program.

“As we looked ahead at our industry’s work in the city of St. Louis over the next few years,” Steve Faust, business development and diversity coordinator for icon Mechanical told St. Louis Construction News and Review last year at the graduation ceremony, “we realized that we needed a continuing and larger diverse workforce. We examined other apprenticeship training programs and tried to adopt best practices that would ensure that enough craftspersons would be trained and available.” 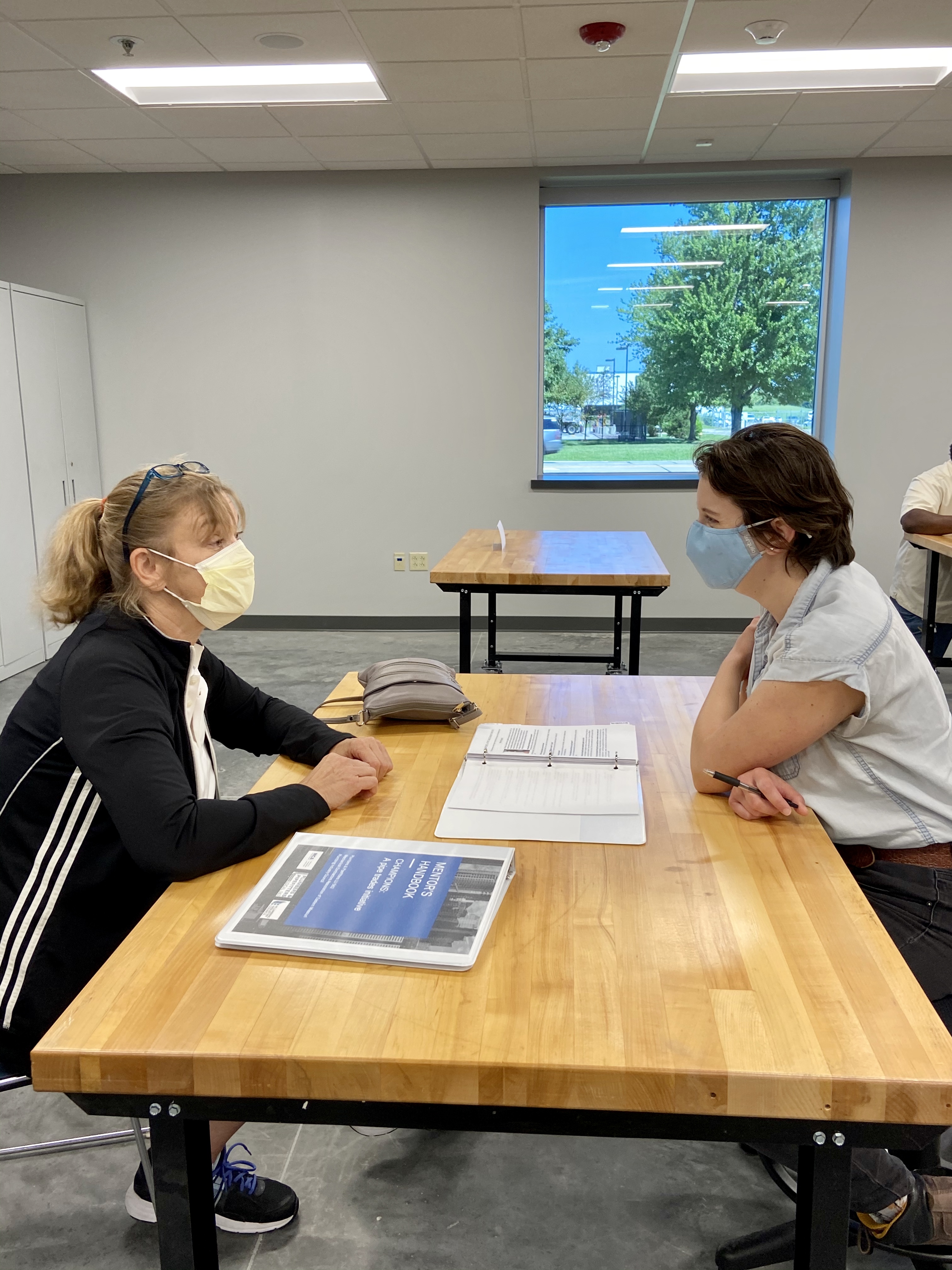 As part of the program, the CHAMPIONS committed to a multifaceted course curriculum and engaged in weekly mentorship, and committed to personal and professional evaluation sessions, all of which continues as pre-apprentices in the field.

Readers would certainly expect Local 562 to teach the best technical training – although the CHAMPIONS had the added distinction of being the very first students to pass through the then brand-new training hall in Earth City, Missouri.

“Of course, we took all necessary precautions on account of COVID,” Carmosino adds. “There were no issues, but it certainly helped that the students and instructors were the only ones in the entire building at this time.”

Beyond the basic plumbing and pipefitting training, however, the CHAMPIONS also participated in non-technical professional development courses. On their first day at the training hall, they engaged in an examination of the value of time management and its impact on daily productivity. As the six weeks progressed, the students studied financial planning, and sharpened skills such as teamwork and constructive communication.

“We collaborated with several area not-for-profits, such as Mission STL and Prosperity Connection, as well as the St. Louis Community College Workforce Solutions Group and Dale Carnegie to provide essential tools and advice to our CHAMPIONS,” Carmosino adds. “We focused on developing the whole person, so that throughout the program, participants strengthened both their technical and soft-skills aptitude.”

In addition, the initiative includes specialized monitoring and support to the CHAMPIONS.

“People will mentor you, and we will be involved with you for a long time,” Brian Nichols, Local 562 assistant business manager/president told the St. Louis/Southern Illinois Labor Tribune during the program’s kickoff. “If there’s something you stumble on, we’re here to help you. We’re here to be a big happy Local 562 family. When you get sworn in, you’ll be adopting 4,200 new brothers and sisters.”

According to Carmosino, the mentorship element is a key to much of whole enterprise.

“We hope that students not only see this as a job, but as a career,” she adds. “We want them to be able to envision their lives here in five years, and mentorship is essential to building a strong sense of community within the trades.”

Following a mentorship training course, volunteers from Local 562, many of them foremen, met with students regularly on an individual basis once a week for the first six weeks of initial training. Mentors received discussion topics and materials to help support their initial conversations with the students.

“The mentoring meetings lasted for an hour (during the initial six weeks),” Carmosino adds. “We wanted to make sure to keep the conversations flowing and make the meetings as productive as possible.”

And these conversations continue.

“For the first six weeks, we monitored carefully to confirm that mentors and mentees felt that they were a good match,” Carmosino adds. “Now the pairs still meet, but the time is really theirs to discuss what they would like.” 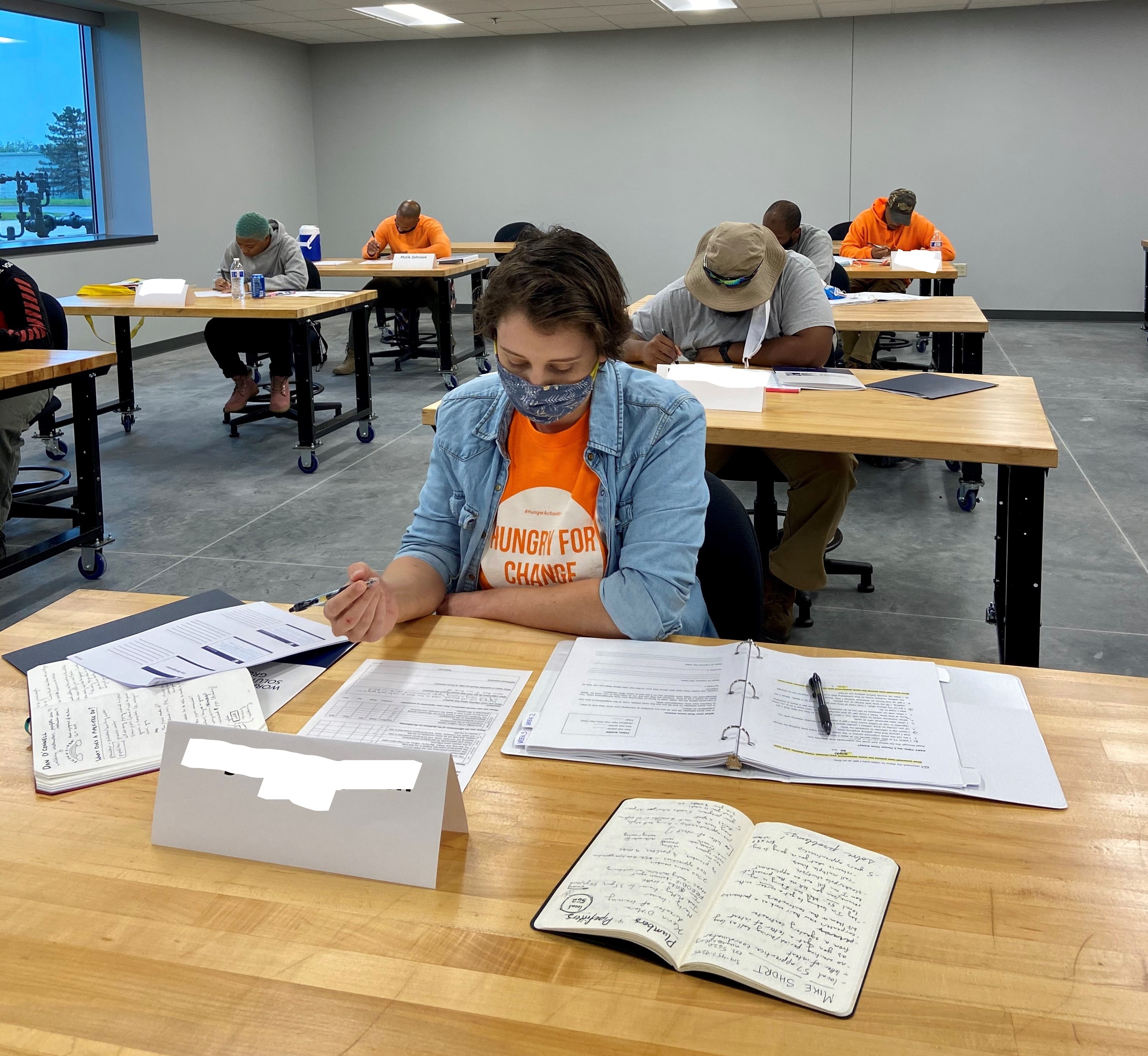 And to further ensure a good fit, the contractors who signed on to hire the pre-apprentices also took part in a cultural competency class. The course focused on effectively leading diverse and inclusive teams in the field.

“It’s a two-way street,” Carmosino explains. “Everyone benefits from understanding another employee or team member’s perspective. The course offered positive and valuable advice for all of us.”

Finally, every three months all the CHAMPIONS and mentors meet at Local 562 for a peer group meeting.

“It’s a great opportunity to talk about how things are going, share experiences, and gain feedback from their peers,” Carmosino says. “The meetings help keep everyone on track, and foster comradery for students and mentors alike. These sessions are important now that the CHAMPIONS are out of the classroom and into the field.”

The CHAMPIONS were selected through a competitive application and interview process. Some came through the BUD (Building Union Diversity) program, which was launched in 2014 to bring more minority and female workers into the union trades in a partnership with the St. Louis Building & Construction Trades Council; the Eastern Missouri Laborers District Council; and St. Louis-Kansas City Regional Carpenters Council.

In addition, Carmosino also worked with community organizations such as the aforementioned Mission STL, as well as Fred Searcy, director of minority recruitment at Local 562.

“Our recruiting focus was on people living in the city,” Searcy told the St. Louis/Southern Illinois Labor Tribune last year. “With all the new projects coming up in the city, we wanted to recruit participants that could live, work and build in their own city, while instilling pride in their own neighborhoods.”

Since the CHAMPIONS Initiative is technically a pilot program, a thorough review will be completed this year. As of now, there is hope that another cohort will begin in the near future.