A revamped New England inn dating back to the 1800s needed plenty of PHCP to turn it into a home away home for kids battling cancer.

We don’t use words lightly, but nothing short of “cavalcade” is the right word to describe all the PHCP contractors and distributors who have come together during the last two years to help Tommy’s Place, Falmouth, Massachusetts, a free vacation retreat for families with kids coping with cancer.

“Everybody wanted to work on this project,” says Paul Lyons, owner of Northeastern Mechanical HVAC and Patriot Plumbing, Canton, Massachusetts. “We probably put in 500 hours in Tommy’s Place. We started with the bathrooms – all nine of them – before heading back later to install the heating system.”

Lyons’ two companies have been serving customers throughout Massachusetts for decades making them an ideal candidate to come to the aid of Tim O’Connell, a real estate developer who’s been hard at work to restore an historic inn that dates back to 1811.

"I just believed that once I started, people would come out to help," O'Connell told us by email. "At first, I was the biggest problem. I wanted to do this all by myself. It took me three weeks to finally make a post asking for help. When I did, the support came flooding in."

And did it. O’Connell lists a couple of hundred companies, including most every type skilled trade, and individuals who have donated money, time and products to make his mission possible.

O’Connell definitely needed all the help he could get since the 18-bedroom, 7,000-square foot Elm Arch Inn, which famously took a cannon ball hit during the War of 1812, sat vacant for a number of years before he finally purchased it in 2018. 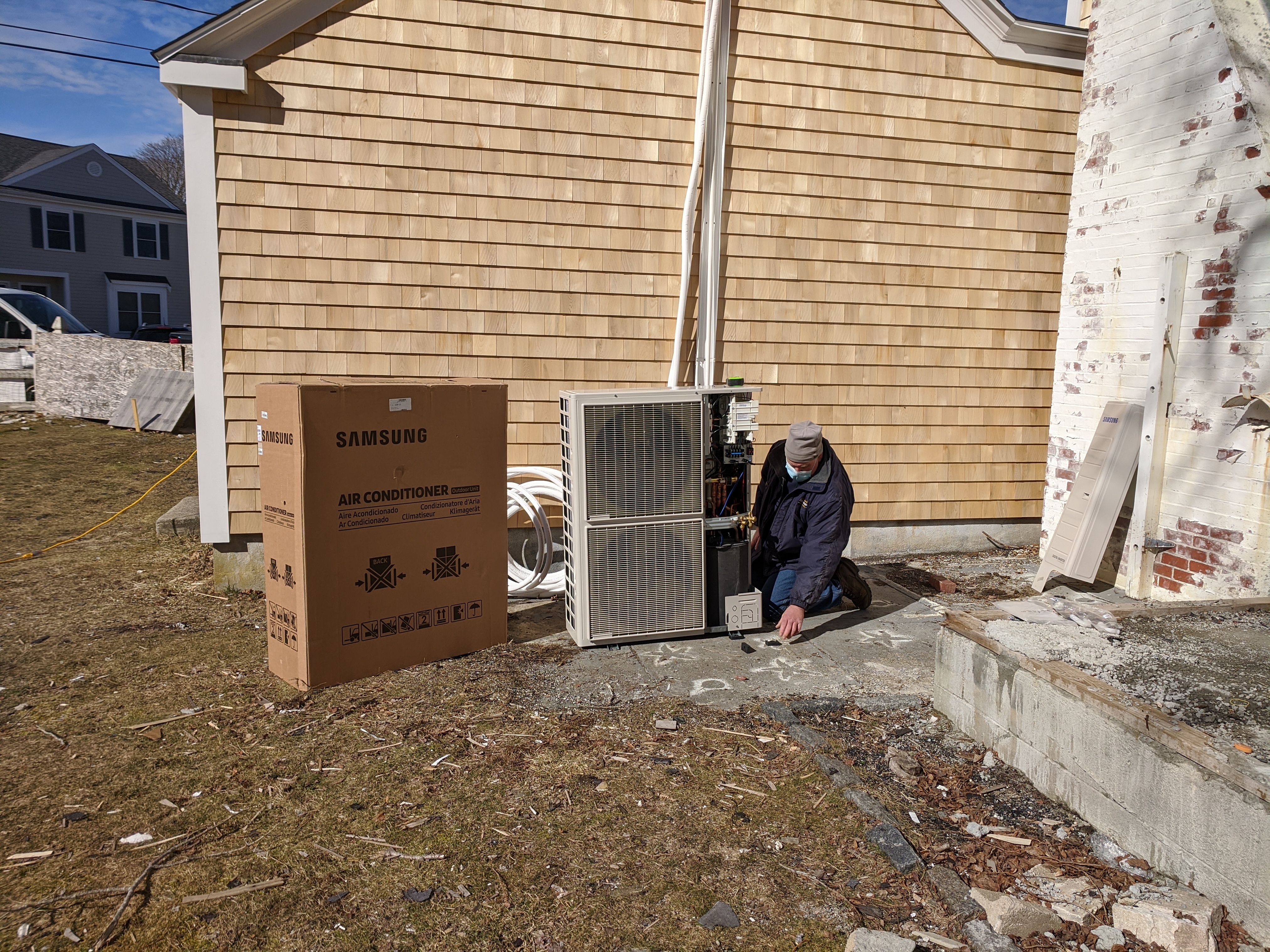 O’Connell has had the idea for the retreat on his mind for the past 14 years. The home will honor the memory of Grifyn Sawyer, an 8-year-old from Lynn, Massachusetts, who passed away from cancer in 2007 shortly after a family vacation on Martha’s Vineyard at a rental house donated by O’Connell.

Although he had provided the vacation anonymously, O'Connell received letters of thanks from the family.

“They were happy and smiling,” O’Connell recounted to the Cape Cod Times. “The mother wrote me a letter saying it was the first time Grifyn had smiled in a long time.”

The grandmother also wrote a letter saying the same thing about her daughter.

As a flyer telling the story of Tommy’s Place, “a home away from home for kids fighting cancer,” explains: “Grifyn lost his brave battle with cancer on December 26, 2007, shortly after a memorable family trip to the Martha’s Vineyard home of Tommy’s Place founder Tim O’Connell. Tim never met Grifyn, but he never forgot him.”

And in case you’re wondering who Tommy is that would be the town’s favorite son, Tommy Leonard, an avid runner and popular bartender who founded the annual seven-mile Falmouth Road Race in 1973. While the first race attracted about 100 runners, the ASICS Falmouth Road Race is now considered one of the premier non-marathon races in the country, attracting more than 10,000 runners. The field of runners typically includes many of the best American and international runners, including both past and future Olympic athletes.

There’s a monument to Leonard in Falmouth’s Town Hall Square and an adjacent crosswalk was named Tommy Leonard Walkway. Leonard, who was instrumental raising funds in the early days of the project, passed away in January 2019.

We first learned about Tommy’s Place and the big role the PHCP industry has played with a post O’Connell put up on his LinkedIn profile last January recounting the time he met “a couple of guys in Falmouth” a little over two years before.

“Complete strangers to me at the time,” O’Connell wrote. “I knew one of them had something to do with plumbing and when I met his friend, he told me that he, too, was in the plumbing business. Upon learning about Tommy's Place, each of these guys without hesitation said, ‘Let me know when it's ready because I want to help you.’ ”

Those strangers would be Lyons and Ken Noies at Patriot Plumbing.

“They never visited Tommy's Place,” O’Connell added. “They never asked me to send them over any information.”

Fast forward to last year and O’Connell let the two know he was ready – although he didn’t know what their responses would be given the times.

“After all, we were in the midst of a pandemic,” he wrote. “Construction had been shut down. People were hurting. But I never knew what ‘ready’ meant until I started to see trucks with plumbers and materials showing up.”

The Northeastern/Patriot crew also got in touch with Local 12 Plumbers and Gasfitters Union in Boston for additional help. In his LinkedIn post, O’Connell also gave a shoutout to Jeff Camuso, owner of PVF wholesaler Charles D. Sheehy, Inc., Avon, Massachusetts, and Tim Fandel, business manager of Local 12 in his post.

“These awesome guys have come together to donate ALL of the plumbing labor and materials for Tommy's Place,” O’Connell wrote. “We are beyond grateful for their incredible support and generosity!! This is a tremendous burden lifted off of our shoulders and we just can't thank these guys enough for all of their help, support and generosity!!!”

That triple exclamation point might make a fitting end to our feature. But there’s more!!!!

O’Connell recounted in another LinkedIn post about asking for help from New England powerhouse PHCP distributor F.W. Webb and Co., based in Bedford, Massachusetts.

“So, several weeks ago I sent a blind message over to Jeff Pope the owner of F.W. Webb and Co.,” O’Connell wrote. “Jeff oversees a $1 billion operation with 2,600 employees spread over nine states. Jeff doesn't know me. We have never met or spoken before nor did anyone give him a heads up that I would be reaching out to him. I just said to myself, why not? Obviously, Jeff has a lot more things on his mind than some stranger sending him a random message. Well, guess what!”

O’Connell went on to say how Webb’s Richard Boynton got in touch with him within days. Boynton and his Webb colleagues Rob Lucci and Jason Halmen paid a visit to Tommy's Place. After touring the site, the Webb crew recommended a Samsung DVM S VRF system.

“Things quickly come together and in just a matter of weeks,” O’Connell wrote, “ALL of the equipment and materials are delivered to Tommy's Place - ALL generously donated by Jeff Pope!!!”

“Paul Lyons, owner of Northeastern Mechanical HVAC didn't forget about Tommy's Place,” O’Connell wrote, “and has once again stepped up to support us on the labor and installation side!! Paul has an incredible group of awesome guys that are kind, courteous and true professionals who take great pride in their work! A special thanks to Michael Michaud who heads up the HVAC division at Northeastern Mechanical!”

A Webb newsletter published last winter featured more on Tommy’s Place, adding that Richard and Rob have roots in Falmouth – Richard for one has helped run the Falmouth Road Race for the past four years to help raise funds for cancer research and intends to take part again during this year’s race in August.

Meanwhile, Rob and his wife were so moved by the project that they’re sponsoring a room at Tommy’s Place.

“My family and I have had our own experiences with cancer, and have lost too many loved one to this awful disease,” Rob says in the Webb newsletter. “Even still, I cannot imagine what these families have had to go through. When I envision Tommy’s Place, I think of the smiles and laughter that will fill the halls week after week, and year after year. A safe haven for families that have been dealt a tough hand and a break from the realities of doctor’s appointments and cancer treatments.”

The goal is to open Tommy’s Place by next summer. The home will include 11 bedrooms (whittled down from the original 18), a game room, library, rooms for arts and crafts, music, a home theater, a tavern and outdoor grounds with a swimming pool and public garden. There are also plans to renovate a cottage on the property should the family in residence need assistance from guests or visiting caregivers.

While we just focused our feature on a few PHCPPros who helped, O’Connell also lists Economy Plumbing & Heating Supply Co., Boston; and NB Kenny Mechanical Contractors, Devans, Massachusetts; on his list of supporters.

"I must say thank you 500 times a day," O'Connell emailed us. "When you can't say thank you enough, that must mean something good is happening, right?"

If anyone is interested in helping out Tommy’s Place, donations are accepted on the Tommy’s Place website at www.tommysplace.org, and O’Connell says he answers every email personally at seaport35@gmail.com.

This feature is part of our Plumbers Giving Back series, sponsored by the the International Association of Plumbing and Mechanical Officials (IAPMO).