Tradespeople who only work with fossil fuels must understand that heating can be accomplished with electrically driven heat pumps.

When I read a report/slide presentation from the New York Power Authority (NYPA) on the viability of geothermal exchange at the Empire State Plaza, it said that geothermal “can’t generate steam” and “drilling wells in urban area is a disruptive process.”

With some information provided by Keith Schue, technical advisor for the Sheridan Hollow Alliance for Renewable Energy (SHARE), we gained access to the necessary mechanical design information for the Plaza, and were able to correct some of the mistaken assumptions made by NYPA.

A couple of months ago, I had a phone conversation with a super in New York City who is getting ready to start a feasibility study under the New York State Energy Research and Development Authority (NYSERDA) FlexTech program. He asked, “Is this geothermal going to be able to make the same steam my boilers do now for my campus?”

This brings to light an important point. It is counterintuitive for tradespeople who work with boilers and know how to create heat through combustion of fossil fuels to understand that heating can be accomplished with electrically driven heat pumps. A lot of workforce training is going on around the world, the nation and in places such as New York. Here is some more information about the Empire State Plaza’s adventure over the last four years.

The Empire State Plaza in Albany, N.Y., was the vision and legacy of New York Gov. Nelson A. Rockefeller. The idea for the government complex purportedly arose from Princess Beatrix of Holland's visit in 1959 and Rockefeller’s embarrassment of the decaying streets around the capitol.

According to a Times Union article, the Empire State Plaza was the largest and most expensive government complex ever built in North America (http://bit.ly/2LBROaX). It was the subject of significant controversy around the time of its construction (1965-1973). Nearly 7,000 people were evicted under eminent domain, mostly from working-class and poorer sections of older Albany, to build the plaza.

“On March 31, 1962, after Rockefeller’s proposal was leaked to the press, Albany’s Mayor Erastus Corning 2nd [also raised in similar privilege to Rockefeller and of great wealth] blasted the project as a ‘ruthless takeover’ and a ‘place that will look most spectacular on postcards all over the world, but will, in fact, hurt the people of Albany,’” the Times Union notes. “The mayor declared the governor’s complex ‘something that might be expected of a dictatorship.’ 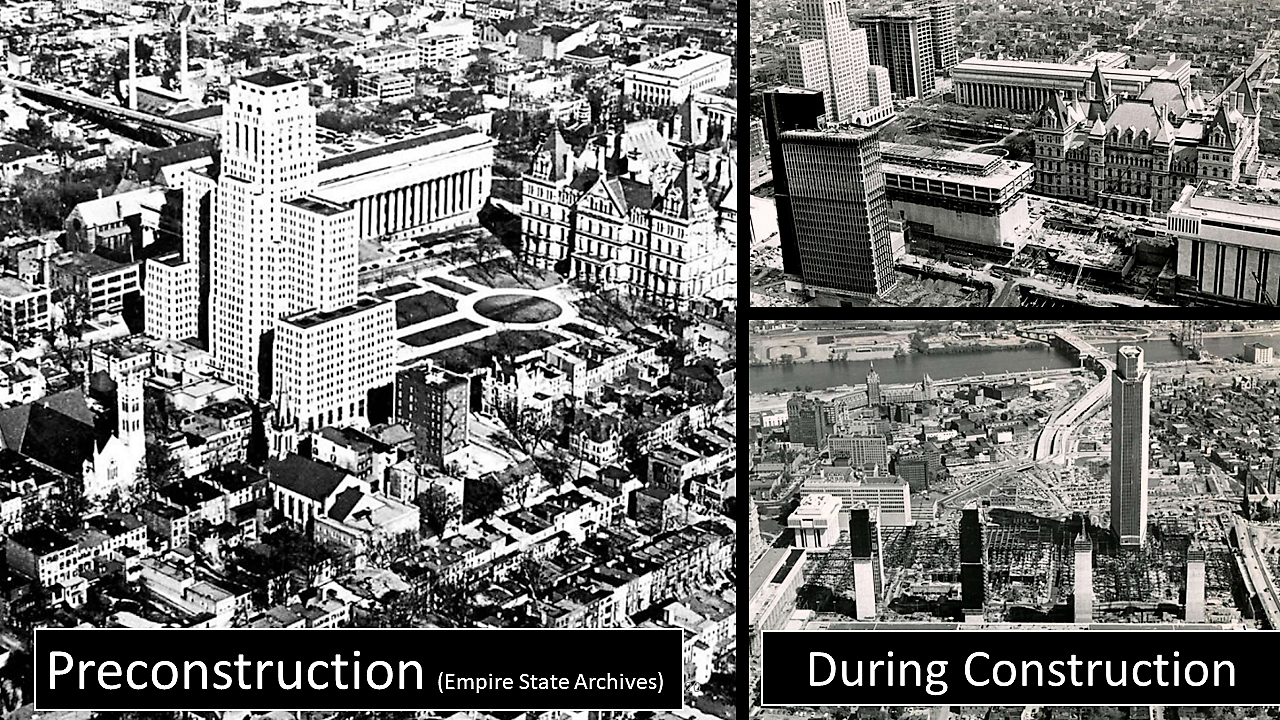 Though Corning slammed Rockefeller’s plan in public every chance he got, behind the scenes, he was negotiating to make the best deal for his city — and himself. His private insurance firm, Albany Associates, profited handsomely by insuring portions of the plaza construction. The bank at which Corning was the director, National Commercial Bank and Trust Company, made a good deal of money in the plaza’s financing.

Because New York taxpayers would never approve a $2 billion marble monolith, “it was Corning who floated a complex financing scheme to the governor who ‘rose to it like a trout to a fly,’ according to the mayor, an avid fly fisherman,” the Times Union reports. New York finally paid off the Empire State Plaza in 2004.

For more than a century, residents of Sheridan Hollow, a community within a stone’s throw of the plaza, have suffered with pollution caused by the combustion of coal, oil, natural gas and garbage at a steam plant in their community. The plant delivers heat through a half-mile-long tunnel to the state capitol building.

Since the construction of the Empire State Plaza in the 1970s, steam produced in Sheridan Hollow was also used to operate centrifugal chillers for cooling. Then, in 2015, the NYPA proposed the installation of gas-fired turbines in the community as part of a combined heat and power microgrid to serve the plaza.

Patterned after a Rikers Island prison project, the proposed co-gen plant would have operated around the clock, perpetuating an archaic combustion-based system of heating and cooling, and burning nearly 50 percent more gas in Sheridan Hollow than today.

Fast forward to 2017, when Egg Geothermal was contracted by NYSERDA to teach a series of day-long continuing education sessions on geothermal technology throughout the state. The New York Geothermal Energy Organization (NY-GEO) was intimately involved in securing these strategically placed teaching spots, filling the evenings with town hall meetings at libraries and churches.

Bill Nowak, executive director of NY-GEO, hosted our efforts, organizing, driving and attending all the events. As we were driving through Albany, he told me that the Empire State Plaza intended to install gas-fired turbines in Sheridan Hollow to heat, cool and power the plaza. SHARE wanted to switch to a geothermal HVAC solution, and they needed my help. 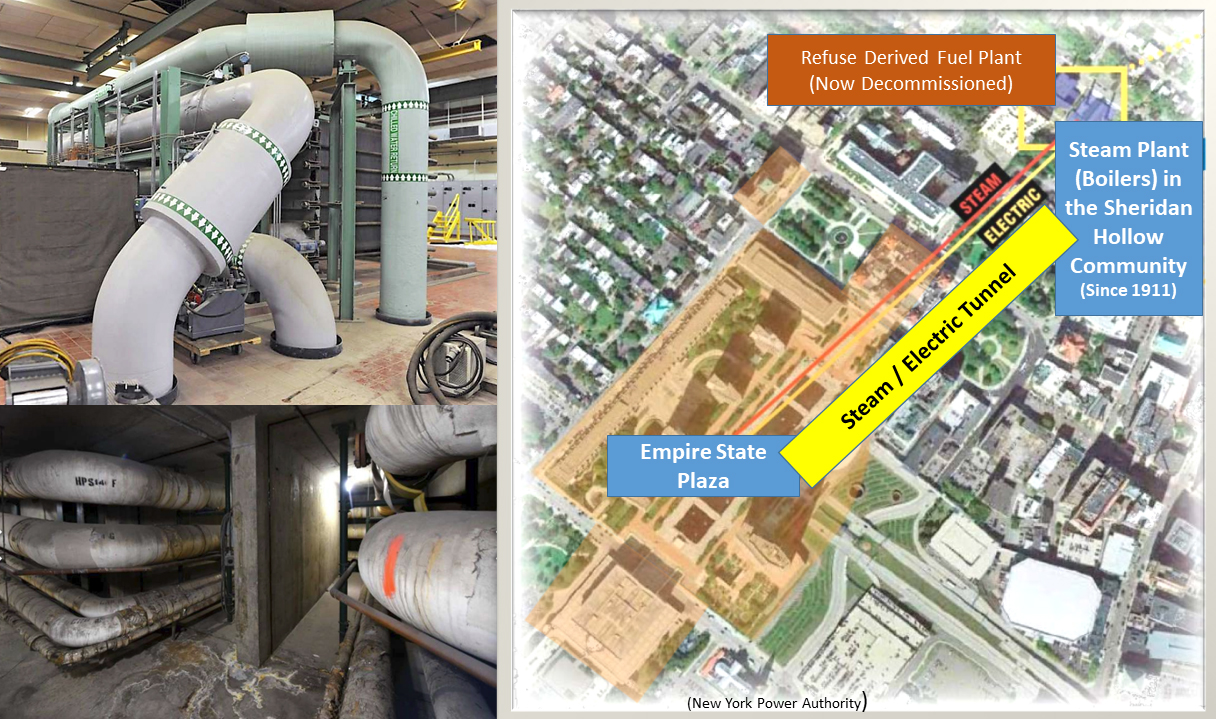 After speaking with and reading some technical background provided by Schue, it was apparent to me that this nearly $100 million project should be reversed. I decided to write an article to get some exposure; it ran in the November 2017 issue of Renewable Energy World, titled “CHP Project for Empire State Plaza Misses the Mark,” (http://bit.ly/38LxAEq).

Working together, Keith and I analyzed what had been proposed, exposed flaws and advocated for alternatives. I noted that New York would be installing a “stranded asset” — because of state mandates for action on climate change, the CHP plant would be illegal before it finished its useful life.

I explained in the Renewable Energy World article that a geothermal heating and cooling system could be accomplished at the Empire State Plaza. However, the CHP project would have to be interrupted, and a Request for Proposals for a geothermal HVAC upgrade would need to be issued.

A meeting with the NYPA and Albany’s Mayor Kathy Sheehan went poorly. Further discussion with the New York Department of Public Service, the governor’s office and Alicia Barton, then president of NYSERDA, began to make some progress.

On April 30, 2018, a worldwide coalition of experts (including representatives from Cornel University) met with NYPA on behalf of SHARE at the plaza. In an all-day session, we provided information to educate and open the understanding of attendees to opportunities, ultimately providing alternatives to gas-fired turbines (CHP).

Recently, Keith and I were awarded the 2020 Constellation Prize for Policy Impact because of our work on the project (https://bit.ly/35JJsFd).

The prize “sheds a light on how engineering can be done to promote new modes of engagement, research, development and design that elevate the values of environmental protection, social justice, human rights and peace.” It recognizes “thoughtful collaborations” between the engineering community and organizations who promote these concepts.

“Solutions proposed by Egg and Schue included geothermal technology for heating and cooling, renewables to offset electricity use and efficiency improvements,” states a press release announcing us as winners. “They authored technical reports on the feasibility of alternatives (https://bit.ly/3nPbAwR), gave presentations, and met with agencies, legislators and community groups.”

In 2019, NYPA abandoned its plan to install gas turbines in Sheridan Hollow (http://bit.ly/3iiCPio) in favor of electric-driven chillers, a solar complex to offset electricity and efficient lighting. It authorized a nearly $30 million geothermal-coupled electrification upgrade to one of the on-site steam-driven chillers to reduce local gas use and emissions by 18 percent. 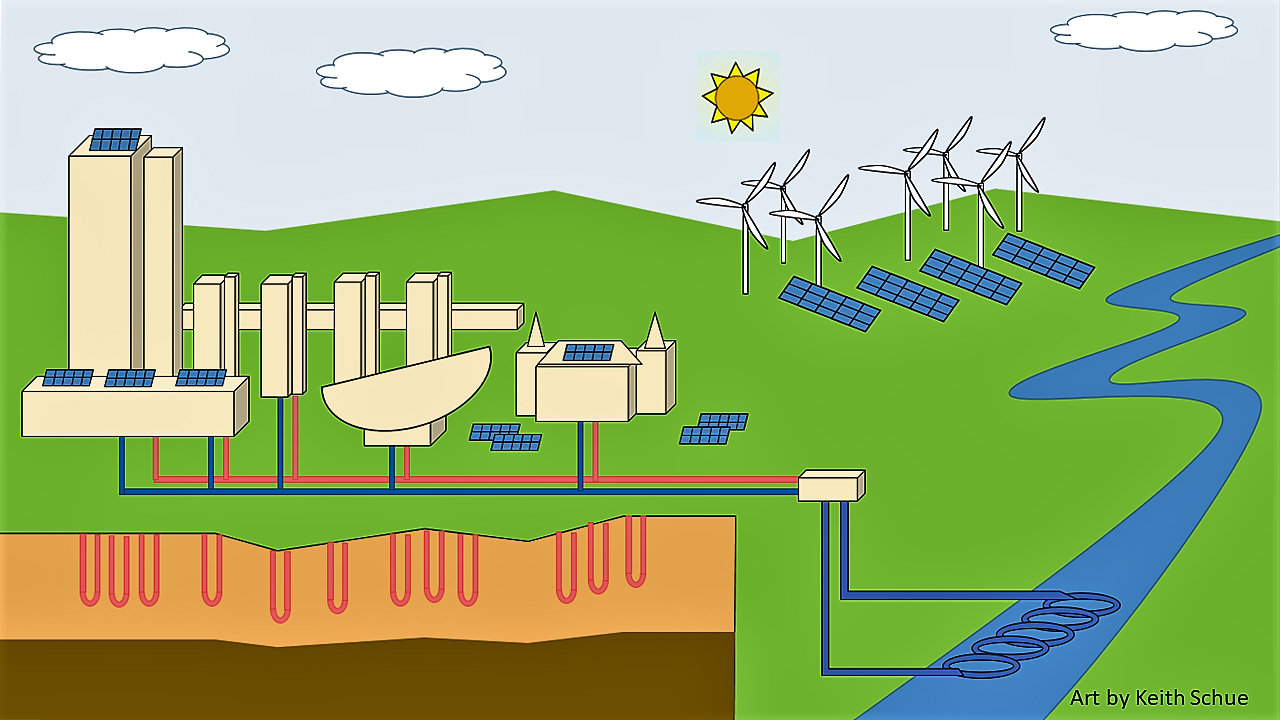 “[Egg and Shue’s] success demonstrates how the engineering profession can be operationalized to work in coalition with frontline environmental justice communities, potentially resulting in environmental protection and climate justice outcomes,” notes A.J. Schneller, an assistant professor of environmental studies and sciences at Skidmore College who nominated us to receive the award.

Keith notes: “To be successful, you need to have the science and an understanding of what is possible. But you also need activism and people to really push for what should happen. If we had either one of those things, but not the other, it would not have been enough.”

The $88 million CHP project for the plaza was to have been fully operational by late 2019. Instead, we are in the process of decarbonizing it. I am humbled to have been part of an amazing team that turned this around.

Special thanks to Kristy Egg for being involved and insisting we stay engaged in this effort on behalf of Sheridan Hollow. Egg Geo has been a pro-bono contributor on this project for the last four years. As a public health and epidemiology professional, Kristy champions these great causes wherever we are involved.