We have choices — and working in the trades has been the gift that keeps on giving for me.

Choosing a career path isn’t the easiest decision when you spent the better part of high school doing everything but studying. A lot of us stumble and bumble around for a while until we find our calling. In the four years between 1975 and 1978, I majored in metalworking, drafting, electrical, plastics and woodworking, with a few Roman numerals following more than just a couple of those.

I made dustpans, toolboxes, ornate iron shelf hangers, artsy things made of plastics, and wired things while not burning down Carl Sandburg High School in Orland Park, Illinois. I also learned how to draw nuts, bolts, bearings and other mechanical things on a drafting table with a mechanical pencil, a better fit for me than the common No. 2 pencil.

I did well in the other classes if I were inclined to show up; many times, I didn’t. It seemed as if there was always somewhere else I’d rather be. If my teacher was strict, I showed up, did my work and did well. The lenient teachers never had a chance with me because I took full advantage of their pleasant nature. Most of them never gave up on me; that’s a credit to them.

Senior year, I cut at least two-thirds of my U.S. government classes. The day before the final exam, I showed up for the semester summary. Mr. Funk (truly, his name) asked me if I planned to show the following day as well. I said I would and apologized for my frequent absences.

He accepted my half-hearted apology and then informed me I needed an A on the final to pass the class. This was big. Really big, as in bad. If I didn’t pass that class, I wouldn’t have enough credits to graduate from high school. That wasn’t an option, so I pulled my first all-nighter. For studying, that is.

Mr. Funk never did tell me what my grade on the final was, but I did graduate, so it’s possible he gave me the benefit of the doubt. To this day, I don’t know. After class, I walked with him to his 1957 Thunderbird that was always waiting for him in the front parking lot near his classroom windows. He told me it’s only going to get harder starting right now, so it would be in my best interest to start putting in the work to succeed.

I did exactly that, but not right away. I hadn’t felt enough pain yet.

My friends all went to college right away, Northern Illinois University. I went a year later after working for two years for the railroad, making some serious coin for a kid of 18 to 19 years. If you think choosing college was a bad choice for me based on my high school experiences, you would be correct. I followed the same behavior as I did in high school.

NIU had pool tables, growler buckets, brain-rattling loud music and girls — and that’s where my focus remained. One and a half years later, I was almost out of money and not enjoying the school part of it, so I decided a change was in order. I was not in my element and I was probably the last to realize it. 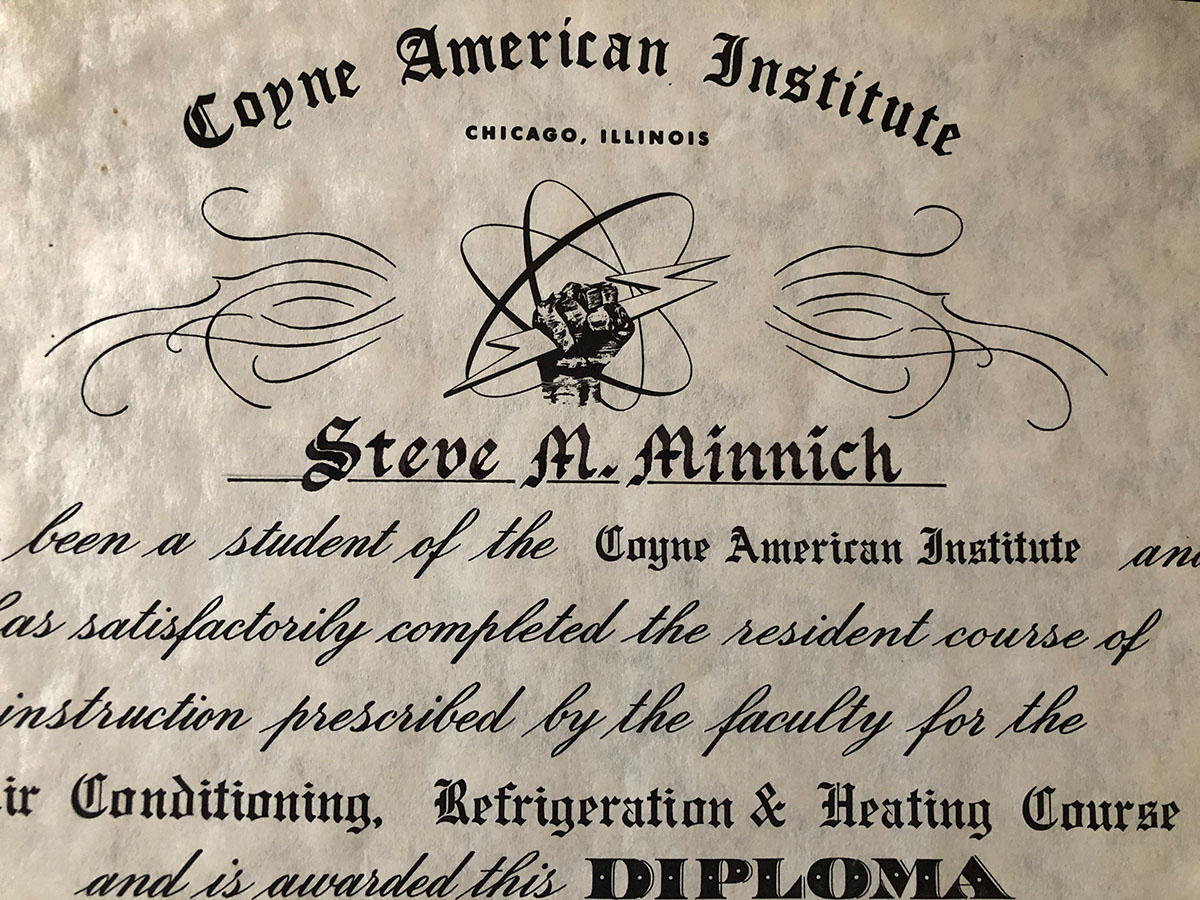 Enter Coyne American Institute, a trade school on the north side of Chicago. I saw their advertisement in the Chicago Tribune of a proud-looking guy carrying a steel toolbox, imploring me to become a refrigeration, heating, ventilation and air conditioning mechanic.

I wanted to be that guy. I loved working with my hands; if I was going to have my head in a book, I needed to know it was time well-spent. The early course requirements offered at colleges didn’t interest me in the slightest. Still, it was easy to see how understanding the refrigeration cycle could directly benefit me in my now chosen field.

The school was an old building on Fullerton Avenue, not far from Wrigley Field (Figure 1). The shop floors and the classrooms were well-worn hardwood that showed their many years of wear and tear; the instructors had the same look. However, their enthusiasm for the trade was not lost on me. Guys as old as I am now were still excited about working with the tools and happy to teach those who would be their successors.

At Coyne, I dug in the very first day and did not let up once. It was easily a two-hour round-trip commute, four hours of classroom instruction, four hours of shop and homework every night. Nearly 12 hours a day invested in something I really enjoyed.

Hands-on, knuckles banged up, mistakes made, lessons learned — and all the while, my tool collection was growing. For the first time, I was buying tubing cutters, 5/16-inch nut drivers, refrigerant gauges and acetylene tanks. I still have some of the tools I started with. I was like a kid in a candy store; I couldn’t get enough of it.

Within the first couple weeks, we’re taught how a gas-fired furnace operates, its components and their purposes, how to maintain them, troubleshoot them, take them apart and rewire them. It all happened in steps, of course, but we moved ahead at a steady clip.

We were also drawing piping and wiring diagrams early on. The drawings helped so much because as your pencil or pen moved from the secondary of the transformer to the thermostat, the limit switch, on to the gas valve and back to common, your mind absorbs how these things work together. These were practical teaching and learning methods.

Figure 2 shows an example of one of my early drawings at Coyne American Institute. Wiring was a little easier back then. It was just the start of printed circuit boards and high-efficiency equipment; we didn’t see either of those in trade school. Belt-driven blower motors and low-boy furnaces were still common. Spark ignition? Yes, but not nearly as popular as the ever-dependable standing pilot burner.

The goal was the same, though. We wanted buildings to heat and cool dependably, same as today.

This isn’t about technology, though. It’s about finding a career that’s right for you. You — not your friends, not your parents, and certainly not your high school guidance counselor.

When you’re young, it’s easy to be led in a direction you may not be comfortable with. I was, but it wasn’t my mom and dad. They wanted me to be happy and, for some reason, they thought I’d be successful. It wasn’t my friends. I just wanted to keep hanging out with them. That’s the real reason I went to college. It wasn’t the guidance counselor either. Chances are, I never showed up at my appointments.

I did find my way, though, and in the grand scheme of things, I did it quickly. I’m 60 freaking years old now and I still love what I do. I don’t know a lot of people who can say that. Every single job I’ve had since enrolling at Coyne has been in the HVAC trade — installer, service technician, contractor, inspector, adjunct faculty, technical support, and now designing hydronic systems and writing once a month for PHC News.

I’ve been fortunate to experience many facets of this great trade and met some incredible people along the way. I’ve learned more than I ever imagined, with more opportunities than I ever dreamed.

I have zero regrets for the choices I’ve made. I even went back to college in the early 1990s when those subjects that bored me in my teens made sense to me in my thirties. When the student is ready, the teacher will appear.

I encourage you to share this article with someone you know who may be like I was. We have choices — and working in the trades has been the gift that keeps on giving for me. It can be for them, too.

And to Mr. Funk, thank-you. Thank-you for allowing me to be who I was and for the push to become someone better.