… for more reasons than one as Laura Ciriello-Benedict hires on character and trains for skills.

The best place to start this story is to go back to 7:30 a.m., Oct. 4, a year ago at a special workforce breakfast discussion held during the PHCCCONNECT2019 in Indianapolis.

Growing up in a family business, Laura said the industry was always a part of her life. But by the time she was in college, she told everyone attending the morning forum that she did not want any of it.

“I knew I wanted to go into business,” she said, “and I thought I would be an accountant because they were the exciting people.”

The crowd got a big laugh out of that one.

But Laura’s father, William J. Ciriello Jr., who was running the Beech Grove, Indiana, plumbing business his father opened in 1952, invited Laura to lunch one day. 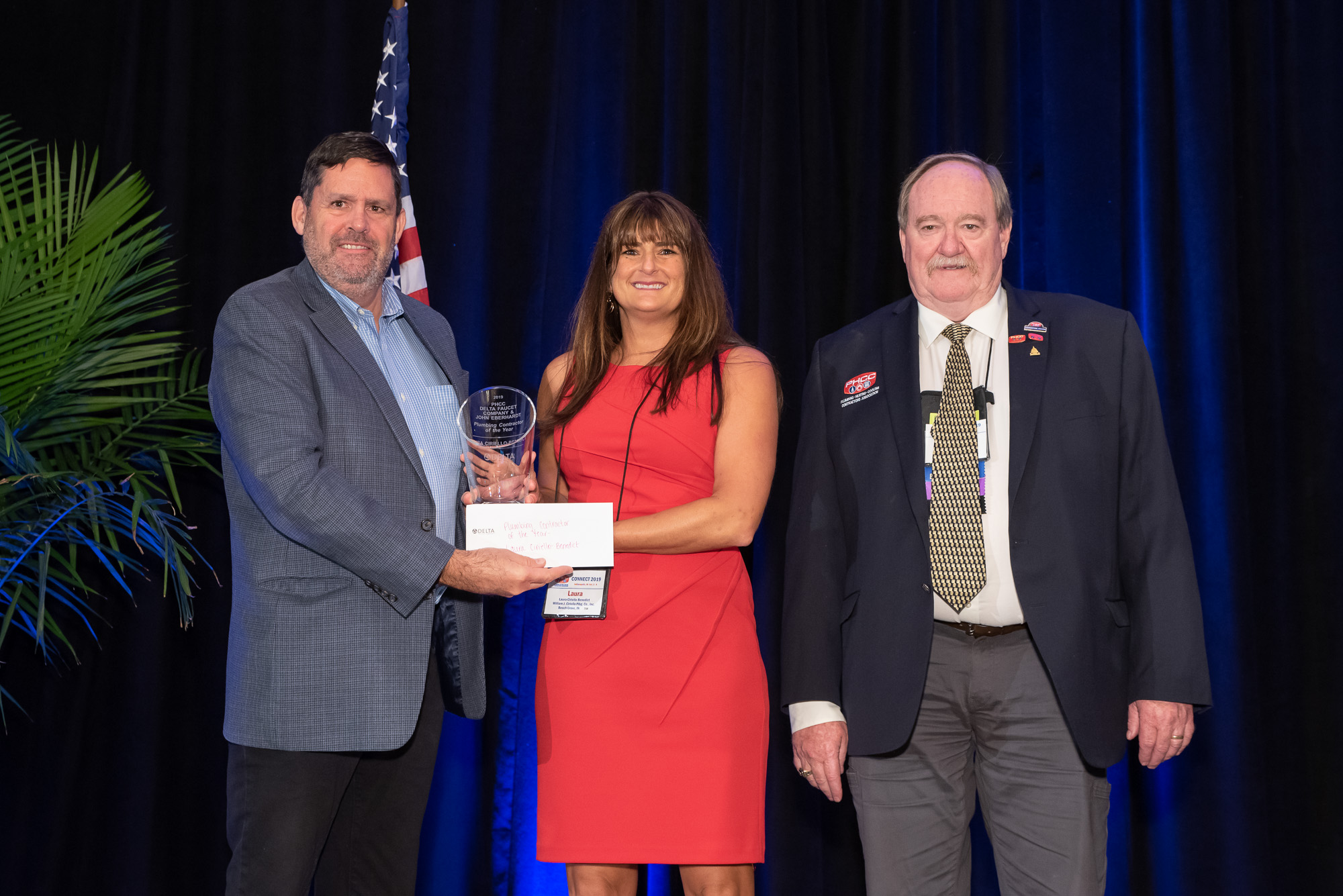 He asked her about joining the business; after all, she did want to go into business. And she said she would join him as long as she could go into it planning on one day owning the business. So, after graduating college in 1995, Laura studied for the state contractor’s license and showed up with about a hundred others to take the test. She was the only woman taking the exam.

“I aced the test,” she added, “got a very high grade on it. And I’ve been working in the industry for 25 years now, and have owned my company for almost 10 years.”

Later during the panel discussion, Laura said something that stuck with us and made us curious to find out more about her and the business.

If that wasn’t enough to perk our interest, then, a few hours after the morning meeting we knew we’d definitely have to plan a return to Indianapolis since Laura was named the National PHCC Plumbing Contractor of the Year, an annual award sponsored by Delta Faucet, handed out during the convention’s Awards Luncheon.

Now, once we did finally make the trip to visit her last October, we figured there was more to her success than just being bossy. Besides the commitment to training, Laura also has a natural gift to spot talent and the personality to share the benefits of a career in the trades to the next generation.

“She’s well aware that being a female business owner and licensed plumbing contractor means she is often in situations where she stands out,” Brenda Dant, executive director of the Indiana PHCC and who moderated the PHCCCONNECT2019 panel, told us as we planned our coverage for own Contractor of the Year. “She takes those opportunities to promote the trade, dispel stereotypes and sell not only her company, but the entire industry.”

That’s as good a summary statement as we could hope to write, so let’s break this down and take a further look:

“We’ve always been known for having highly technically skilled techs,” Laura says of her crew, which focuses solely on service work with 60 percent of it in the commercial market and the remainder in residential. “We say we are the ‘plumber’s plumber.’”

A lot of other local plumbing companies know if they can’t fix it, then Ciriello can.

“We do work for a lot of other plumbing companies because the skill has always been the center of what it is that we do,” Laura adds. “Our approach is fix the things that need to be fixed with good advice, go home at the end of the day and be proud of what he did.”

To that end, first and foremost, Ciriello Plumbing, as do all other Indiana contractors who can take advantage of it, profits from Mechanical Technical Skills Inc., and its four-year apprentice program administered by the Indiana PHCC.  The school trains more than 700 apprentices a year, making it the largest plumbing apprenticeship school in the country.

Throughout the Mechanical Skills program, students learn the most basic of plumbing skills all way to in-depth knowledge of design and regulations that cover best practices.

Laura’s father was one of the program’s founders and is the unofficial superintendent of the school. But the school really is a labor of love for a very committed PHCC group. 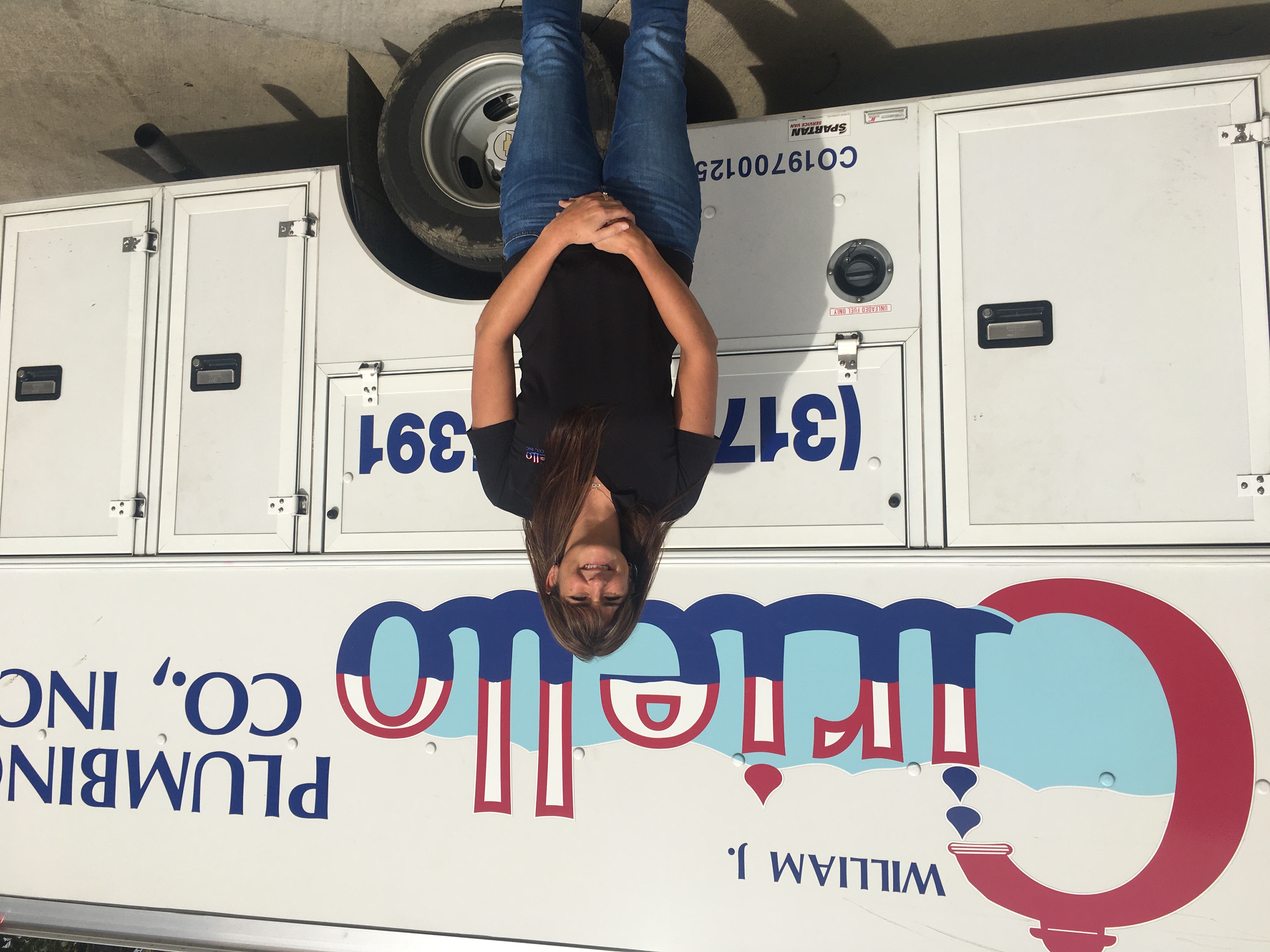 “Plumbing in Indiana is really like a big family,” Laura adds. “We are the largest PHCC chapter in the country with more than 263 contractors.”

Laura, herself, was the chairwoman of the school’s board of directors for three years, during which the curriculum for each of the four years underwent review. As a result, weekly lesson plans were rewritten and teacher manuals developed. The Distance Learning Program was expanded to have a live classroom feed so that the online apprentices were able to take part along with the in classroom students.

“These were things that were talked about for years,” Dant told us, “but lacked the leadership to successfully complete the project. Laura provided that leadership.”

Anyone Laura hires to start a plumbing career makes a beeline straight to the next class at Mechanical Skills, where over the course of those four years students spend about 576 hours in the classroom and another 7,600 hours in on-the-job training.

Sounds good enough, but not good enough to make the grade at Ciriello Plumbing.

To do that, Ciriello Plumbing includes a formal classroom along with a hands-on lab featuring working plumbing products. While she says everyone with experience is counted on to help train the rookies, colleague Pat McCullough, aka “The Professor,” is in charge of training that presents apprentices with instruction on four days a week

And it’s not just the typical classroom or hands-on training either. Every day, Laura sends out a training video to synch with whatever topic McCullough is currently teaching. These are typically videos of no more than five minutes long that Laura typically finds on any number of manufacturers’ YouTube sites or other web searches.

Techs also get trained in the soft skills of customer service, as well as financial planning and budgeting advice.

“We are very blessed in this field to be a very high wage industry,” Laura adds. “But we also have young people joining the business who may have never heard anything before about finance.”

Training isn’t just for apprentice plumbers. All experienced techs are in the training center, too, on a regular basis, and the administrative staff isn’t forgotten either.

“There’s not one person here who was a plumber before they came here,” Laura says. “Probably my biggest gift is that I can see talent. I love to surround myself both professionally and personally with people who have big dreams and big thoughts.”

For future techs, that means being on the lookout for anyone Laura comes into contact with who provides exceptional service.

“He was inundated with calls and with people coming in,” Laura adds, “but he greeted each customer kindly. So, I waited until the place was quieter and asked him if he wanted to make pizzas forever.” He later became a tech at Ciriello Plumbing.

Or it could be McCullough’s niece who was working at a White Castle and is currently a Ciriello apprentice.

Or it could be Richard Walker who was putting in water treatment equipment for Laura’s office manager one day.

“I went over there to see what he was doing, and his copper piping was beautiful,” Laura adds.

He even had directional arrows on the piping. And his truck was clean and organized.

“I told him the top of his field was the bottom of mine,” she says. “If he was interested in a change, I told him to let me know.”

That was 15 years ago, and today, Walker is a vice president and partner in Ciriello Plumbing.

“We’re almost a production facility when it comes to our ability to make well-rounded technicians,” Laura says. And while technical training is important, Laura says so is the helpful environment of the overall team, including office staff checking in on and rooting for the technicians.

“Sometimes the key is asking how things are going,” Laura explains, “Or how the kids are doing. People who work here are not one-dimensional.”

The ability to spot and nurture talent also extends beyond fieldwork. To further encourage growth and momentum, Laura recently implemented a management team to add another dimension to organizing the business.

The team is comprised of:

“I love the family business,” Laura explains, “but for so many family businesses, it can completely consume and become your everything. I knew for me, that wasn't it.”

The concept of this extra layer of management is still new, but Laura says the idea is to create “real structure for the business so it will be ready for the next challenges and opportunities.”

As it turned out, Laura had an eventful week, to say the least, during PHCCCONNECT2019. Right before the conference began, she hosted eight students from Beech Grove High School to explain the plumbing industry.

The local school district used to require service days for high school graduation that typically included some type of volunteer work. While it still does that, school officials also opened up that time up to learn about skills training, too.

The students gathered at the shop to listen to a 20-year-old apprentice talk about his work, in other words, a guy who the students could have likely gone to school with. And they also got to try their hand at soldering. That was a big hit, Laura adds. But so was the event. After a career counselor asked the eight students if they would consider joining the trades, all indicated they would.

Over the years, Laura’s been a big proponent of taking part in career fairs and talking up the trades as a career. When her two daughters were younger, she even slung a 48-inch pipe wrench over her shoulder for show and tell.

“Let's be really honest,” Laura explains. “I am somewhat unique. So you might pay more attention to me simply because you can't believe that I’m a plumber. So I like to talk to young people about the field, just because I'm so proud of it. That’s No. 1, but the money that they can make here without the debt of college is definitely worth explaining to kids who really have no idea what a plumber even does.”

Laura also serves on the Beech Grove High School Work Ethic Certificate Advisory Board. The purpose of the committee is to develop specific traits employers look for when hiring. Laura is the only plumbing contractor on the committee.

“We’ve pushed college for so long as if it’s the only path to take,” she explains. “But college and trade school are really equal in their own ways.”

Through the work with the advisory board, Laura has also taken part in many conversations with career counselors, even to the point of attending that group’s own national conventions.

We asked Laura if she felt a change in the mood of counselors treating trade schools on the same footing as a college degree.

“We just had this conversation the other day,” she said. “I'd like to say that in my lifetime, I will see a huge influx into the skilled trades. I think it's going to come back. And consider that when COVID hit, who was still working every day? Plumbers! We’re an essential workforce.”  l