One contractor got its start building Nevada before it was barely a state. And our other contractor pioneered PHCP comforts in St. Louis.

“It’s unprecedented,” said then-Gov. Brian Sandoval during the company’s 125th anniversary celebrations in 2018. “We’re not aware of any business in state history that’s been continuously operating like Savage and Son. So it speaks to the character of that family, it speaks to their dedication and to their mission, which is to serve people in Northern Nevada.”

For six generations the Savage family has owned and operated the company, and grown it to become the region’s premier PHCP establishment.

“Our company's success is directly related to the loyalty of our customers, our relationships with our community and the remarkable qualities of our employees,” says Pete Savage, vice president and CFO, who along with brother Len as president represent the latest generation to lead operations.

The family traces its heritage to the silver rush of the 1860s around Virginia City, Nevada (at the time, the Nevada Territory) when Leonard Coates Savage, a former Pony Express rider, hoped to strike it rich. 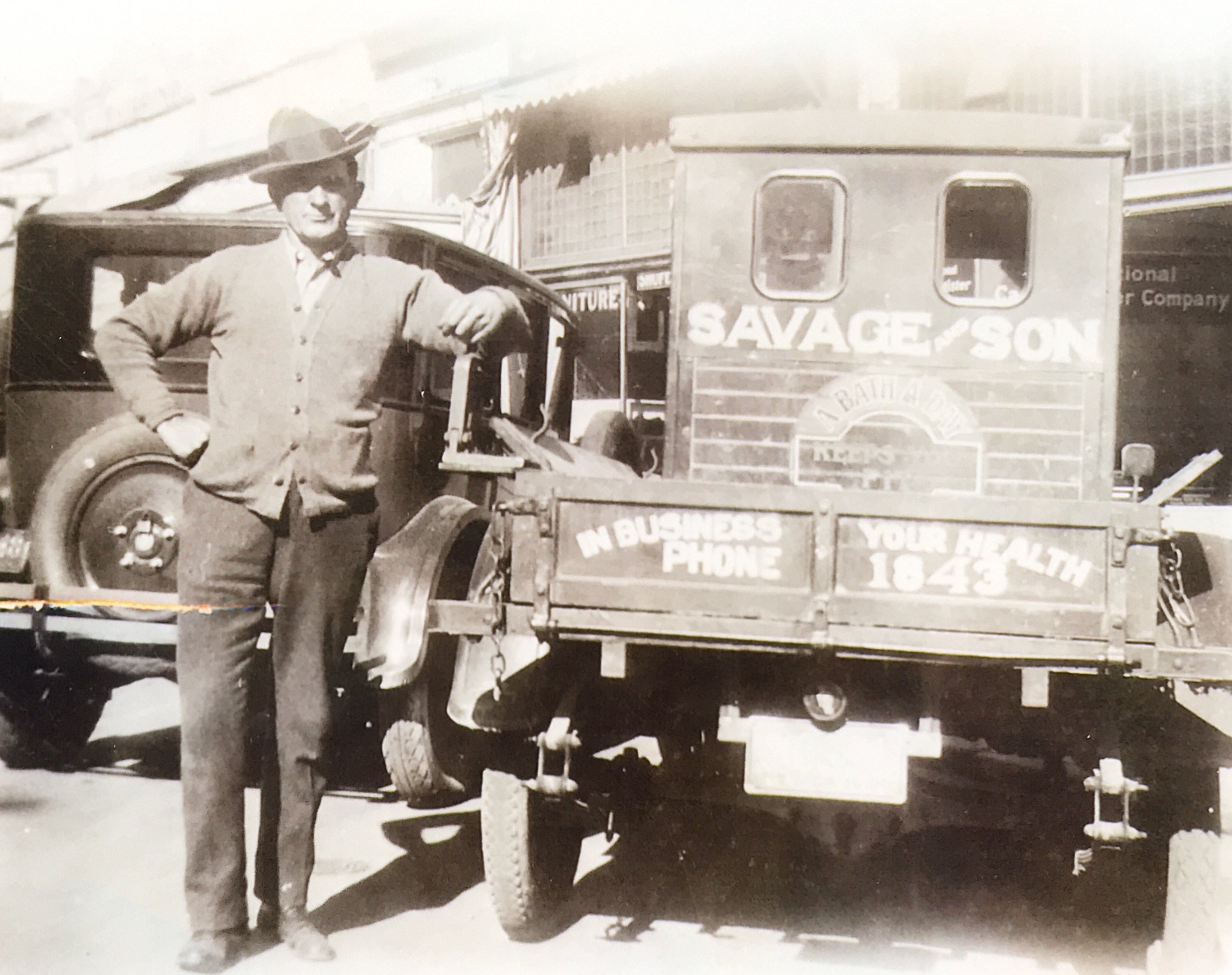 He got his start pumping water out of mine shafts. Eventually, he did end up playing a role in discovering what turned out to be lucrative silver veins in the legendary Comstock Lode, one of the most important mining discoveries in American history.

We say “what turned out to be” since Leonard traded his rights to tens of millions of dollars in a legendary bargain—in exchange for five acres on Peavine Mountain and a white mule (or, maybe, a horse) named Shakespeare.

His surname, however, stuck to the original claim. The ornate 21-room Savage Mansion, the headquarters built in 1861 for the Savage Silver Mine Works, still stands today as an office building.

Instead of mining royalties, the Savage family took up plumbing as its legacy, which is probably a good thing considering its business longevity whereas the area’s silver riches were pretty much tapped out by 1874.

Leonard stuck to offering mining support services, and his son, Frank Charles Savage, went on to co-establish Genesy & Savage Plumbers and Tinners in Virginia City in 1880.

By 1893, however, Frank was ready to run his own show and opened up on Sierra Street in Reno, at a time when there’d only been an official city of Reno for 25 years. Interestingly enough, he named the business Savage and Son.

Frank expanded into plumbing and heating and repaired everything from steam boilers to walk-in refrigerators on ranches. He moved the business downtown in 1915 and son Leonard Charles Savage joined the business in 1917.

If the Comstock Lode helped establish what became the state of Nevada in 1864, then Savage and Son were the original PHCP contractors for many historical buildings in the northern part of the state. Some early projects include the Stewart Indian School; Lake Mansion; Governor’s Mansion; Saint Mary’s Hospital and Central (Reno) High School.

In 1896, for example, Savage and Son installed the plumbing and piping for a men’s dormitory on the University of Nevada, Reno campus. One hundred and twenty-two years later the contractor discovered the original water closets hidden behind walls built decades later when Savage and Son took part in retrofitting the building.

In 1905, Savage and Son installed a heating plant at the Washoe County Hospital (now Renown Regional Medical Center) for $100, and more than 100 years later the company worked on the building the Renown Tahoe Tower.

A shortlist of Savage and Son’s clients is a long list indeed, and ranges from hotels and casino resorts to prisons and from high schools and colleges to the Hidden Valley Ranch manufacturing facility and from centers for molecular medicine to the National Bowling Stadium.

Frank passed away in 1935. Leonard eventually set up shop on Virginia Street in 1941 in what is today known as Reno’s Midtown District. It was considered a bold move at the time since the address was so far outside the city. But the company kept on diversifying and expanding its fleet along with the rest of the Biggest Little City in the World.

(Incidentally, the Virginia Street location is now home to a popular deli that served a Savage and Son sandwich during its 125th anniversary year that featured roasted tri-tip with garlic aioli and Swiss cheese on a Dutch crunch roll, as well as a few other sandwiches named after family members.)

By 1955, Leonard’s son, L.J. Savage, joined the family business after serving in the Korean War. L.J. Sr. was integral to the company’s growth by guiding the company through innovation and developing long-lasting community relationships.

In 1984 and 1985, L.J.’s sons, Pete and Len joined him, respectively, in the accounting and estimating departments.

In 1993, the company made its last move to Yori Avenue that also features a 2,500-square-foot bath and kitchen showroom, as well as a 10,000-square-foot prefab and industrial process piping shop added in 2005 that allows the company to tackle everything from general plumbing and process piping to HVAC wet-side piping. The facility is certified for various codes, including the American Society of Mechanical Engineers’ Boiler and Pressure Vessel Code IX, American Welding Society code D1.1 and shield metal arc welding.

Those capabilities helped Savage and Son expand into new territory once again in the late-2000s with the help of longtime client Peppermill Resort Spa & Casino. The luxury resort and casino had taken an aggressive stance on sustainability in recent years, replacing grass lawns with artificial turf and implementing gray water recycling program to conserve precious water resources.

The contractor joined the hotel in 2009 to assist with a $9.7 million expansion and upgrade the casino was undertaking, which involved the addition of a geothermal well and closed-loop heating system.

There was no guarantee the hotel would find the water it needed to power the new addition, but Peppermill took the chance, and ultimately drilled 4,400 feet down to find the geothermal aquifer of the correct temperature.

Peppermill now uses the source exclusively to heat all of its domestic hot water and mechanical heat across 2.1 million square feet. The investment also makes Peppermill the only property in the country exclusively heated with geothermal energy from the immediate property.

Finally, in 2001, Len became president, and Pete became vice president. As for the next generation, Pete’s son, Peter Savage Jr., started with the company in 2005 and is service department manager. Len’s son, L.J. Savage joined in 2011 and is commercial project manager and estimator.

“Our longevity as a company is a result of our commitment to innovation and the ability to solve challenges, always putting the needs of the community before our own,” Pete adds. “Finally, and most importantly, always doing everything we do with high integrity and moral character. Our father always taught us that there are ‘no little things in business.’ The way you do anything is the way you do everything.”

John F. Corrigan, was a 22-year-old journeyman plumber, when he opened “John F. Corrigan: Plumber and Drainlayer” in 1896 on the corner of Jefferson and St. Louis Avenues on the North Side of St. Louis. According to company lore, his first month’s sales was a mere $10.

“My grandfather was a plumber in the neighborhood plumbing business,” says Dennis Corrigan, president of Corrigan Brothers Inc. and CEO of Corrigan Co., in a 2011 YouTube clip.

From that modest start, however, John founded his business on the principle of providing customers with quality work performed by skilled craftsman within the designated time at fair and reasonable prices, on time and within budget.

It’s said that John’s success was due to his diligence in running his business day by day. For example, he always had a secretary in the office who handled calls, wrote letters and kept paperwork organized. He networked constantly, getting steady work from the local church and schools by attending church picnics, funerals and bazaars. He advertised by putting up signs in front of new buildings. He joined business associations, clubs, had a telephone directory ad and ran newspaper items. 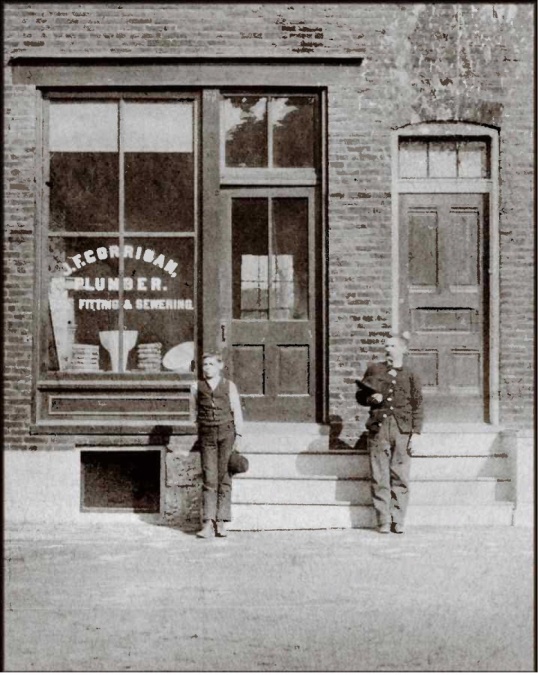 This type of foresight helped Corrigan Co. keep pace with changing times as well as stay one step ahead.

Neighborhood plumbing, for example, was the place to be in the company’s early days since indoor plumbing was, not surprisingly, quickly becoming a way of life for St. Louis citizens. John not only installed indoor plumbing, but Corrigan Co. was instrumental in laying the piping network for the city’s sewer system.

Embracing the next major wave of technology in the age of mechanization and the advent of air conditioning for buildings, Corrigan Co.’s second generation, sons, James A. and Thomas J. Corrigan, moved the company forward in HVAC, refrigeration and air quality.

Cooling down in 1930s St Louis was a primitive affair. Summer heat waves sent people flocking to theaters on Grand Avenue just to stand in front of electric fans blowing air over giant blocks of ice.

The young Corrigan boys had a brainstorm: Why not take the cold air to the people? Mixing what was then the latest tech, Jim and Tom helped Corrigan Co. become the first company in town to install air-conditioning in buildings.

Corrigan Co. would go on to prosper by adapting to other PHCP needs and provide industrial piping for the region’s manufacturing needs.

Throughout the 1930s, when the Great Depression drove Corrigan Co. revenue down by 90 percent, the firm developed a proficiency in industrial piping, a skill it would advance in the coming years to the highest level by helping build the nation’s manufacturing needs to fight World War II. Among its biggest projects was the St. Louis Ordnance Plant, the world’s largest maker of .30-caliber and .50-caliber ammunition for rifles and machine guns.

John passed away in 1947, and Jim and Tom continued to lead the way.

By further expanding into sheet metal and air distribution, Corrigan Co. became a leader in HVAC technology and construction, and left its residential plumbing roots behind to become one of the country’s best-known mechanical contractors in the decades ahead.

As the company’s HVAC sales continued to grow, and later process piping and fire protection, Corrigan Co. bought Lyon Sheet Metal Works, a St. Louis sheet metal shop that would eventually become one of the largest such companies in the Midwest.

Ever an innovator, Corrigan Co. advanced its customer-focused approach in several ways, including:

Today, Corrigan Co. is among the largest full-service mechanical contractors in the United States and still provides the same value of reliability for America’s advance manufacturing, energy, technology, commercial and institutional needs.

Each step of contracting company’s progression from a small neighborhood plumbing shop created an opportunity to deliver greater value for its customers.

Jim and Tom eventually left the company in the hands of their sons. The current generation continues in the tradition by successfully accomplishing some of the largest commercial and industrial projects in St. Louis and throughout the Midwest, including PHCP in biotech and healthcare to green power and aerospace.

Virtually every major building and project in St. Louis has a Corrigan component in it.

“There are 20 high-rise building in downtown St. Louis built in the last 50-60 years, and Corrigan has done heating cooling and plumbing in 16 of them,” Dennis adds.

As for the next generation, Mike Corrigan Jr. started working for the company in 2006. He began as a project manager and then eventually moved on to service manager and is, currently, vice president of service.

Dennis’ son, Alex Corrigan has been with the company for the past four years and is currently project manger.