My heating paraphernalia collection obsession is too much fun to stop.

It started innocently enough. It was just one every now and then. Until it became a daily routine — an obsession, if you will. Once I had one, I couldn’t stop myself. I had to have more. It got to the point where I’d go to any lengths just to get one more. I knew I had a problem, but wasn’t sure what to do about it. Step 1, I guess, is admitting you have a problem. But I had no intention of stopping. It was just too much damn fun. Still is.

I began collecting heating paraphernalia about a week and a half after I started my first job in the industry. It started small like most habits; a boiler data plate here, a boiler nametag there. Before you knew it, I was scavenging old equipment for antiquated parts and calling friends in the business to see if they had any I could score. More, more, more. I had built up a tolerance so that I could have 10, 20 or even 100, and I could still handle it.

Truth is, not all habits are bad. This is the part where my vocation becomes my avocation as well. 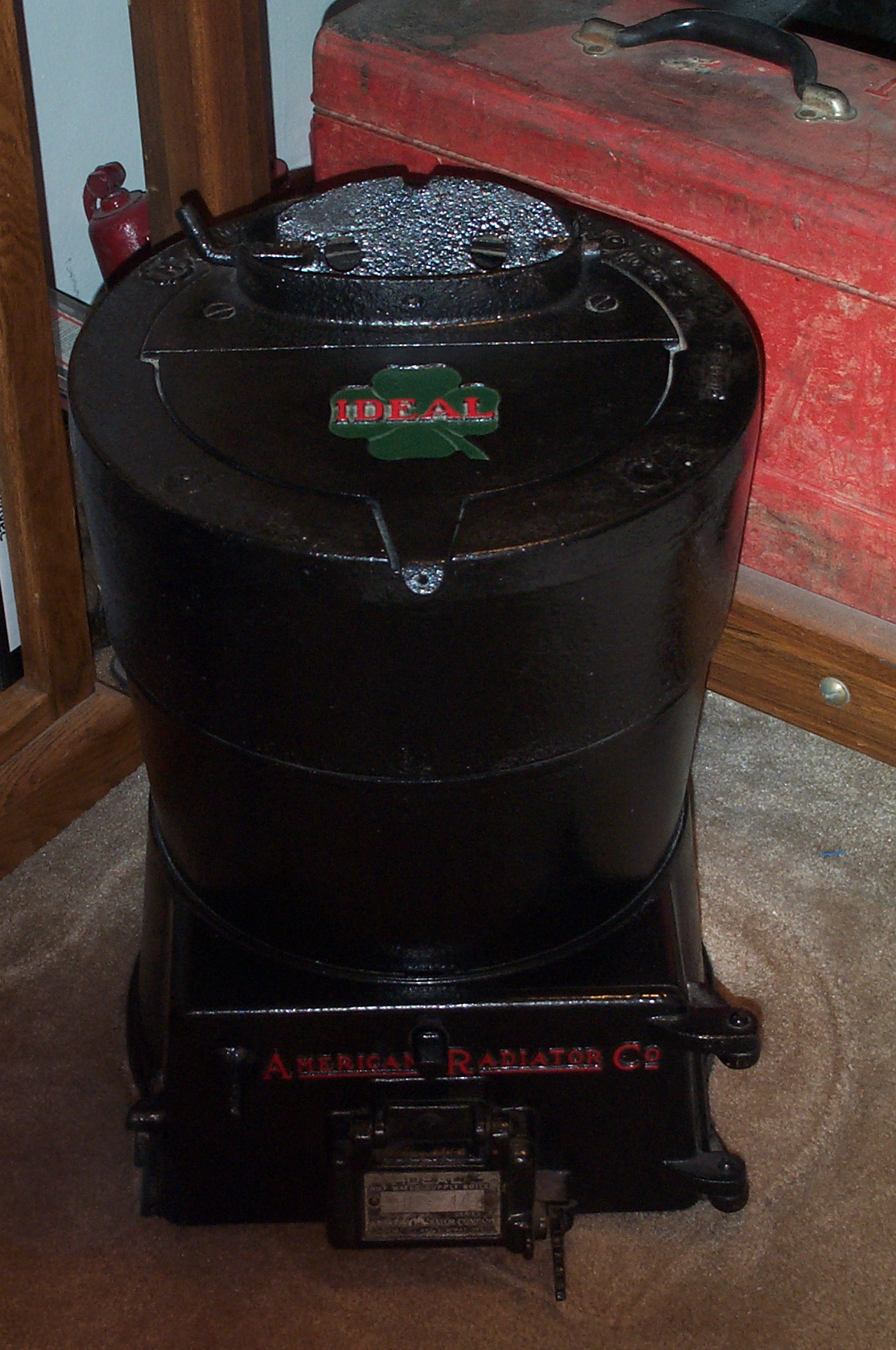 One of my all-time favorites is a century-old American Radiator Co. coal-fired water heater (Figure 1). The data plate describes it as an Ideal Hot Water Boiler, Number 50, Series 1B. It was connected to a 30-gallon storage tank from two 1-inch tappings on the back of the heater. Not only did the owner let me have this, she tipped me $100 for getting it out of her basement. I felt like I won the lottery that day.

I have a few of the Ideal Fitter Handbooks (Editor's Note: Go online to PHCPPros.com to see the rest of Stephen's collection.) and have been unsuccessful at finding the specs for this model.

For the love of restoration

American Radiator swag has always been something I’ve kept my eyes out for. Kewanee Boiler is another one I love to get my hands on. Chicago apartment buildings and churches are veritable museums for Kewanee. They’re everywhere and many of them are still in service. The brick-set boilers have been long retired. but are still sitting there in basements because the cost of removal is just too expensive for most. For heating junkies like me, it’s perfect.

The building owners are grateful for any piece of the old beasts IU can get out of there. Kewanee, Illionis, is where these beauties were manufactured, a tiny town about three hours west of Chicago. It only makes sense that we have so many of them here as shipping costs would have been minimal. 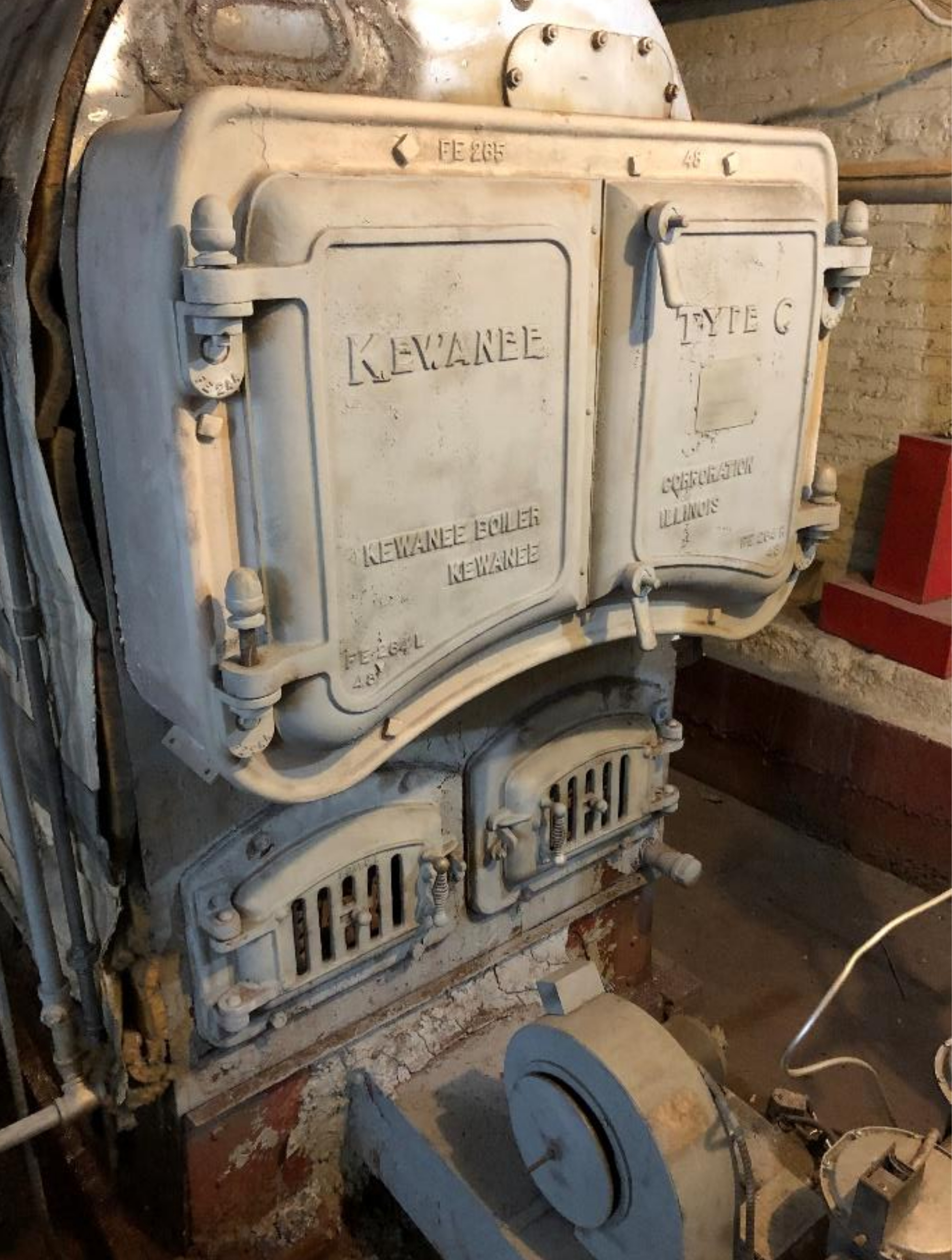 Take a look at Figure 2; that’s the actual Kewanee Type C three-pass, firetube boiler, where I got most of my stash. It’s still sitting in the apartment building basement on Chicago’s South Side. A Weil-McLain 88 steam boiler replaced it just last summer. The Kewanee was still operable, but repair costs were getting prohibitive, so the owners made the wise decision of replacing it.

What did I grab, and what did I do with it? Most anything that had the name Kewanee on it or at least the Kewanee “K.” Everything went into my little shop at home, where they were kept until I had time to clean them up and restore them.

This is where the fun part comes in for me. I get out the wire wheels, wire brushes, paint, brushes, Dremel tool, cleaning agents, nitrile gloves and anything else I needed to make these things come alive again. It can be time-consuming, but there are worse habits a guy could have. Right?

Once I get a piece done, it goes on display in my shop. It’s a reminder for me of how much I enjoyed working in boiler rooms. I really did. I was in my element there. The finished product isn’t half bad either. In fact, I dig it. You can see the sweet gauge is mounted on a real 2 x 4 from early last century (online).

The door was the harder of the two (online). Lots of paint and rust to remove and the lettering is always a bit of a challenge. It isn’t on display yet because I lost one of the pins for the door hinges, but when I get another one, it’s going to serve as the door to the dartboard in my shop. Cool, right? The boiler gauge is a more delicate challenge as I prefer to get the face clean without removing any of the print. I have quite a few gauges, but this is my first Kewanee.

The water column and water gauge (online) is another one I copped off that old boiler. I even went as far as removing 90 percent of the rust and debris out of its guts. It’s one of my favorites and also the first time I was able to grab one.

This next one is interesting to me because it’s a fuel-saving mechanism patented in 1920, for coal no less (online). I didn’t know they thought about those kinds of things back then. It was a series of chains and pulleys connected to a manually adjusted flue damper to a steel plate with “buttons,” as the inventor described them.

By moving the chain from one button to another, you change the position of the flue damper, thereby adjusting the draft and the fire. The buttons have screwdriver slots that can be loosened to slide them vertically for different amounts of draft.

These, too, are all over the city of Chicago. They’ve long been abandoned, with only the steel wall plate and the chains dangling from the ceiling remaining. I had to add one of these to my collection. I wonder how often the owner, or the maintenance man, adjusted these? Or were they just left in the open position, which is not adjustable?

Data plates and equipment nametags are much easier to get your hands on. They’re on every piece of equipment you replace, so why not grab them? I started on these early and glad I did. Almost all of them back in the day were made of steel, and sometimes heavy-gauge steel. I have a few 16-gauge data plates. I usually display them on something that can be moved, such as a painted piece of 3/4-inch plywood or the like.

There were times when I got creative with the displays, such as the Craftsman toolbox (online), where I took the time to drill holes and blind rivet them on. I must’ve been bored that Saturday. The Williamson Five in One and the other Williams furnace tags on there are what I cut my teeth on. Same with the Mueller Climatrol furnaces. Belt-driven motors, standing pilots and gas trains that included a separate gas regulator, main valve and pilot valves.

I wonder how many techs today could describe a Lowboy furnace?

Figure 3 is the board of plates and tags that hangs in my shop. It’s attached similar to how you’d hang a picture, so I can easily move it if I choose. I’m not entirely sure why there are refrigeration controls up there other than to take up space until I get some more tags. 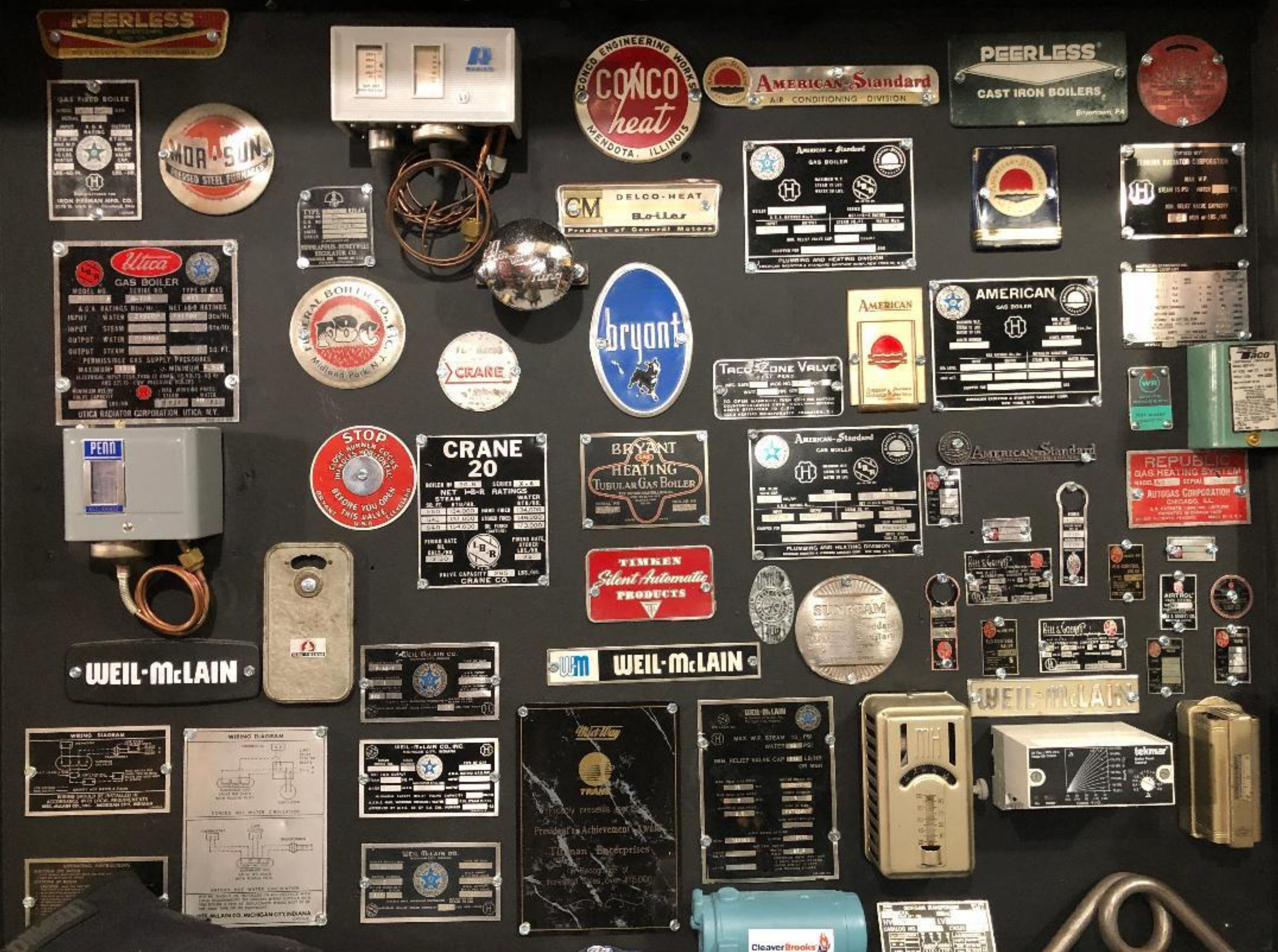 I think there’s only one plastic nametag in the bunch. The rest are stored away in a box somewhere. I’m too old school to put them on display. Maybe when they’re replaced with computer-generated images, I’ll relent and put them up somewhere.

I also collect ancient heating books — with some that date back to the late 1800s — ancient installation and service manuals, and antique tools that have been used in our trade.

But my favorite collectible weighs about 500 pounds and has a born-on date of approximately 1865 (Figure 4). I pulled this wrought-iron tube radiator out of an old church when we did a steam-to-hot-water conversion a few years ago. 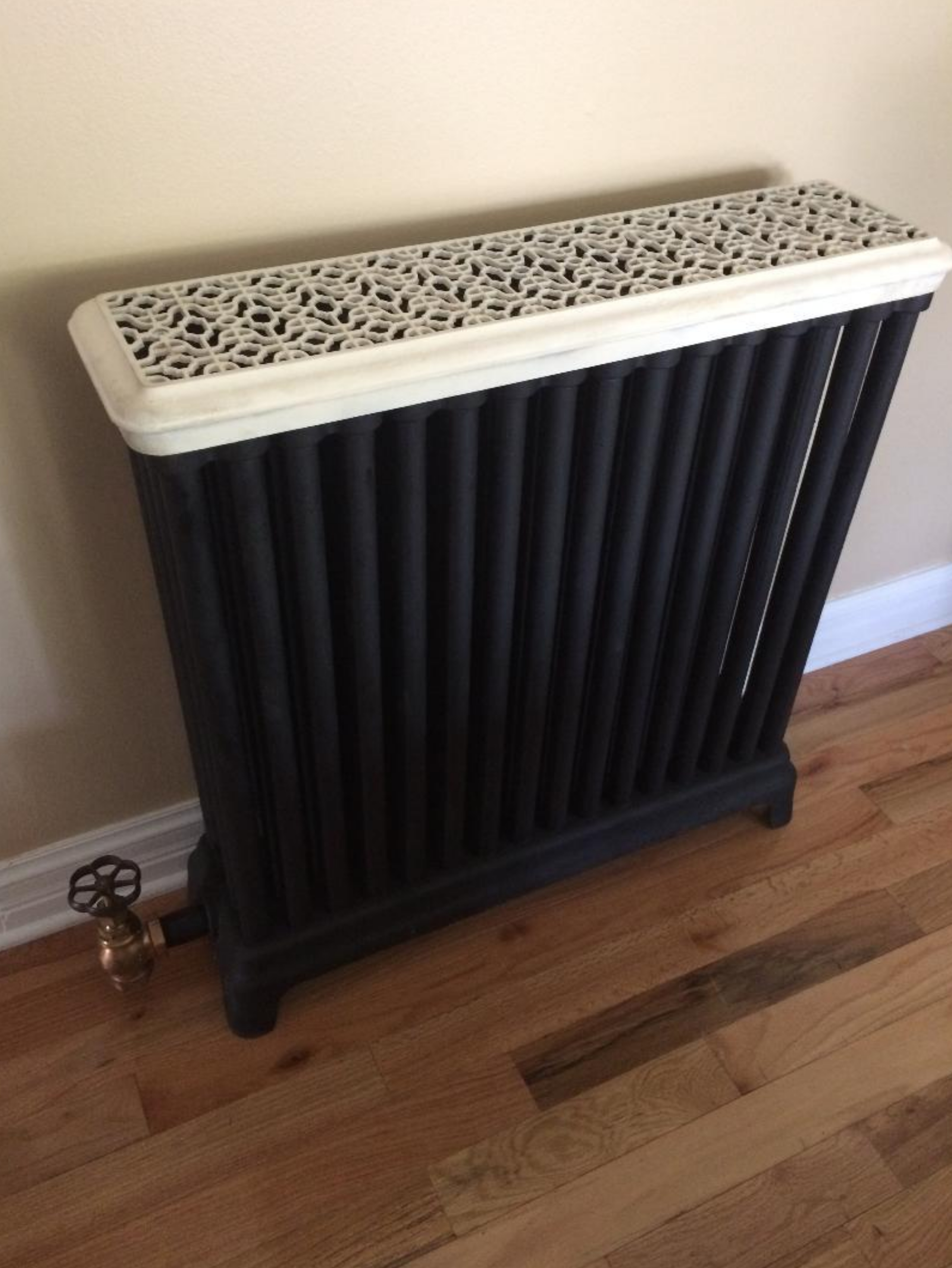 I flushed all the rust out, stripped all the paint and rust off, primed it, painted it and now it sits in our living room, even though we don’t have steam heat. It wasn’t even difficult to sell the idea to my wife. She likes old things. She’s still with me, so there’s that.

I think you’d agree I have this thing under control. No unmanageability. No powerlessness. No worries.