This year, from Feb. 1 through May 31, Wedgworth’s Inc. pumped a little more than 3 million gallons of 185-degree water through its newly installed, 17-unit tankless water heater system at its fertilizer blending facility in Lake Placid, Florida.

That total breaks down to approximately 25,000 gallons per day. And not once during that 120-day span did the new water heating system, manufactured by Noritz America, require maintenance.

Wedgworth’s operations management team, including Joey Miller, vice president of operations, and Ken Bruce, director of liquid operations, count themselves thoroughly satisfied with that stellar performance, although not altogether surprised.

The 15-unit tankless system that Wedgworth’s installed in late 2017 at Lake Placid’s sister facility in nearby Clewiston, Florida, which requires up to 10,000 gallons of hot water daily, has been maintenance-free for its entire service life as well. (Note: Wedgworth’s has a third production facility in Moore Haven, Florida, that generates only dry-fertilizer blends.)

In short, tankless water heating technology has so far proven an unqualified success for Wedgworth’s, a custom blender of dry and liquid fertilizers for agriculture, sod, nursery and golf-course applications in Florida.

Founded in 1932, the company aggregates from around the country and around the world an assortment of raw materials — potash, phosphates, ammonium sulfates and nitrates, and a host of micronutrients — to custom-produce hundreds of plant-nutrient blends. The goal of these carefully made specifications, based on actual soil and plant-tissue samples from the customer, is to maximize yields and minimize costs for the farmer and other end users.

All this blending demands steady and abundant flows of hot water. In Lake Placid, for example, the multiunit tankless system generates 700 gpm, on average. This hot water then moves in even larger quantities through 3-inch pipe to the blending equipment to mix with the raw materials where 1,000 to 4,000 gallons of water enter the equipment in a matter of just a few minutes.

It’s imperative that the temperature of this water must be high enough to dissolve the raw materials.

“The hotter the temperature, the quicker the granular products will dissolve,” Bruce says. “Although when we don’t have quite so much dry product in a blend, we might bring down the temperature a bit with cold water. But if the water temperature drops below 150 degrees, the blending takes longer.”

In other words, the role of the tankless water heaters in this blending process is critical, if not indispensable. 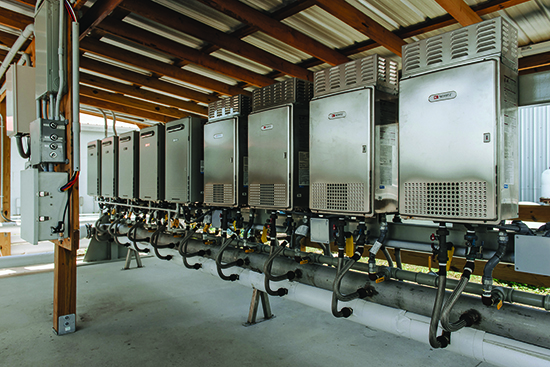 In the vast majority of tankless installations, both residential and commercial, hot water flows directly from the tankless water heater to wherever the demand originated. Whether it is one shower in a single-family residence, or tens or hundreds of showers in a high-rise apartment complex or an equally large hotel, the tankless installation routinely and fully meets the need for hot water as it arises. In some commercial or large residential applications, however, a storage tank might also be used to handle a sudden and unusually high demand for hot water.

But at the Lake Placid facility, even a bank of 17 fully integrated tankless water heaters working in cohesion are not enough to meet the frequent spikes in demand for 185 degrees water, according to Bruce.

“Firing on demand to fully meet the immediate needs of all our blending equipment would have required three times the number of tankless units we currently have there,” Bruce says. Several times a day, the flow into the blending equipment becomes, he adds, “tremendous — up to 12,000 pounds of water in a matter of, say, five or six minutes.”

Which is why Wedgworth’s management ultimately chose to supplement the tankless setup with a stainless-steel storage tank to maintain an ample, always-ready supply of 185-degree water to feed the blending equipment. Lake Placid also has a cold-water tank whose contents are treated with water softeners before being piped to the tankless units. That way, the latter avoid serious problems with hard water.

In designing the hot water-delivery system, “careful consideration was given to the size of our hot-water storage,” says Bruce, whose company worked with Noritz and its local distributor, Tempaco, Inc., on the sizing and design. Storage needed to be large enough to meet Lake Placid’s maximum hot-water needs, but not so large that it becomes a heavy cost burden during slower times.

“The system is designed to reheat water on occasion,” Bruce explains. “But during off-peak times, we don’t want to waste fuel costs by storing excessive amounts of unneeded hot water that will require reheating to the set-point, as the tank temperature falls over time. The challenge to all of our system designers was finding a good balance between those needs.”

Wedgworth’s decision to embrace tankless water heating for its blending processes began with a busted boiler three years ago at its Clewiston operation. Opened in the mid-1970s, Clewiston is just over a third the size of Lake Placid, producing 36,000 tons of custom-blended fertilizers annually, vs. 93,000 tons at the larger facility, which opened in 1967.

Among its many negatives, the Clewiston boiler had suffered a crack in its tank housing. Facing a replacement cost of between $250,000 and $350,000, management began investigating alternatives. Wedgworth’s management team was aware of the cost efficiencies of tankless and further encouraged after doing research online.

Meanwhile, John Faulkner, Tempaco’s regional sales manager, then referred management to another Florida fertilizer producer that had been successfully using tankless for the previous five years. So, operations chief Miller, Bruce and their colleagues paid them a visit.

“Their hot-water demand was significantly smaller than ours, but they had no maintenance costs,” Bruce recalls. “To be honest, we still had misgivings. I was not certain that tankless could deliver the amount of hot water our Lake Placid operation needed, so I wouldn’t install it there at that point. On the other hand, we definitely weren’t going to spend six figures on another boiler for Clewiston.”

So management opted to give tankless a tryout at the smaller facility. The up-front purchase expense for the 15 Noritz NC380 tankless units installed in Clewiston were a small fraction of the projected boiler costs, and the subsequent performance exceeded expectations.

Conservatively oversizing their initial tankless installation, Bruce and his team soon realized that the new water heaters were “more efficient than we had anticipated,” he adds. Having coupled them with hot-water storage, “we quickly learned we could get by with fewer than 15 tankless units.”

As a result, 15 months after Clewiston made the switch, seven of those units were dispatched an hour north on U.S. Route 27 to Lake Placid. There, they were combined with 10 new Noritz NCC300 units, with a 97 percent thermal efficiency, a maximum input of 300,000 BTU/hour, and a maximum flow rate of 13.8 gpm.

As in Clewiston, all 17 units are located outdoors, covered overhead, but open on four sides, to capitalize on the warm Florida climate. The outdoor install, of course, also removes any concerns about venting or makeup air.

Handled by Wedgworth’s own skilled crews, the installation spanned four weeks, including the construction of a custom-designed rack, the pouring of a concrete foundation, roof erection and pipefitting. “There were no surprises,” reports Bruce, who says the installation went smoothly.

• The need for a large, reliable supply of hot water.

As Tempaco’s Faulkner notes, scale can build up inside a boiler over time, diminishing not only its thermal factor, but also the amount of hot water it can produce over time. In addition, Wedgworth’s did not maintain as much storage with the boilers in both facilities, as it later would with the tankless setups.

“There were times when we would run out of hot water, so we would wait for the boiler to play catch-up,” Bruce explains. “I even installed a second storage tank in Lake Placid, but we would still run out on occasion.”

“Because the system is properly designed, we have enough hot water any time we need it,” Bruce says. “We simply never run out.”

• The need for energy efficiency and environmental friendliness.

Even with the supplemental storage, the tankless systems in both plants largely operate on demand, rather than burning fuel 24/7/365.

In contrast, even when the boilers were not generating hot water for the blending processes, they still were burning fuel in the “idle” mode. The precise fuel savings achieved since installing the tankless systems is a confidential figure, but Bruce does indicate they are substantial — and not just over time, but every month.

“When we had to be down an extended amount of time — such as on a holiday or a weekend — an employee would have to come into the plant to crank the boiler, so the steam would be ready the next morning when we started back up again,” he explains. “Today, with the tankless system, we come in, turn on the switch, and the system is ready to go for that morning’s production.”

Another motivating factor is the cleanliness — and, therefore, the environmental friendliness — of the tankless systems.

The boilers at both facilities formerly ran on diesel fuel. Today, the tankless system at Clewiston uses natural gas, while Lake Placid burns liquid propane since natural gas is not readily available at an affordable price in that locale.

“We are burning a much cleaner fuel with our tankless systems,” Bruce says, who adds that this environmentally friendly benefit “goes hand-in-hand” with the third critical need.

• The need for fast, affordable maintenance.

“Now we’re burning gas, and everything stays cleaner with fewer impurities,” he adds, “so there is less need for servicing.”

This benefit is important not only in terms of cost-savings, but also because service for tankless is much more available in Wedgworth’s rural market than for diesel.

“There is one, maybe two contractors in the Florida Heartland within a 150-mile radius of either plant who can service boilers,” Bruce says, “so we are at the mercy of the service technician and his schedule. If he is on another job, we have no choice but to wait.”

Why not have one or more of Wedgworth’s skilled mechanics tackle maintenance chores? The company might do that, Bruce acknowledges: “But when you are dealing with a boiler, you don’t want to push the envelope, because of the safety aspect. On the other hand, with tankless, I can call a plumber to service them, so we have many more options in our locale.”

Then again, even if Bruce had to wait on a plumber to service one of his tankless water heaters, the remaining heaters in his multiunit installations would continue to provide hot water in the interim, so blending could proceed uninterrupted. Unit redundancy with multiple heaters is a huge plus for any tankless end user who simply cannot afford to be out of hot water ever.

Since the tankless systems were installed, neither Clewiston nor Lake Placid has experienced any serious maintenance problems or costs. All by itself, that’s a pretty strong validation of Wedgworth’s decision to switch from boilers to tankless.

“Don’t get me wrong,” Bruce says. “I anticipate maintenance costs down the road. But I could easily replace 10, maybe more, of those tankless units annually, and still finish below my former expenses for boiler service. Add the monthly and yearly inspection fees to the maintenance costs, and the savings with tankless are tremendous.”

Tankless neatly answered all Wedgworth’s issues — supply, safety, service and environmental stewardship, according to Bruce. “After the excellent results we had in Clewiston, even though we didn’t have to make the boiler-to-tankless switch in Lake Placid, these on-demand water heaters just made perfect sense.”

Commercial Contractors & Installers Industry Community News Infrastructure Plumbing Projects
You must login or register in order to post a comment.