Or to translate, a trip to the Paris Sewers Museum.

What is This Thing? 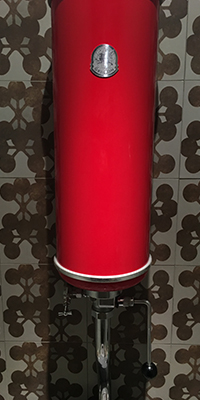 As someone who’s written about the PHC industry since 1990, I’m always on the lookout for unusual plumbing. I remember like it was yesterday when I walked into a Washington, D.C. hotel bathroom and spotted three urinals – two with Sloan flush valves and the other with a Zurn flush valve. Surely, this has to be the Holy Grail.

I posted this onto the Facebook page of Ron George, PE, and columnist for Plumbing Engineer. He commented that it was a hydro-pneumatic flushing device that uses compressed air in the top of the cylinder to give an air-pressure boost to the water going to the fixture for the flush.

The name of the manufacturer was easier to figure since it was right on the front of the tank.

The company, Griffon, was started in 1886. This curious device is called a “hydrochasses,” which Griffon began making in 1950. The company’s website claims it has sold 2 million.

According to the website: “The ‘hydrochasses’ also rests upon both an efficient and an ecological system, avoiding water wastage, which meets ecological expectations. By using the lever, the user controls water flow and the duration of use according to his needs. The power of flow is provided by a hydro flow system in which the air applies pressure to water. This system is placed high up and allows sparing some considerable space.”

The website goes on to say that the Griffon system’s flush is 50 to 200 times “higher compared to any other conventional system.” The flush combined with the total flow control in the lever lowers water consumption up to 70 percent. (Not for me it didn’t because I flushed the toilet about five times to see how it worked. The flush doesn’t stop until you let go of the lever; something I probably should have figured out the second time.)

The cylinders come in some other colors – all bright –  such as blue, orange and yellow.

And if you want to see it yourself after going to the Paris Sewers Museum, the restaurant is Les Saisons, 52 Rue Lamartine.