Officials from A. O. Smith Corp. broke ground on a new 42,700-square-foot corporate technology center on Milwaukee’s northwest side.

The new research center will include water heater and boiler performance test labs, water treatment labs, an air test lab, as well as a number of specialized development labs. The facility will support advanced research and development in the areas of potable and hydronic water heating, water treatment and air purification. The company expects to complete construction during the fourth quarter of 2018. 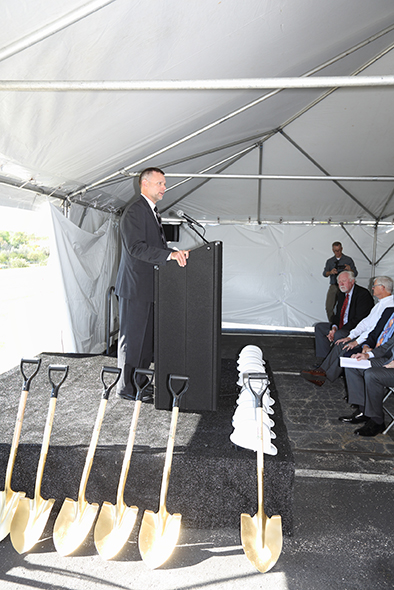 “Whenever we talk about the fundamentals for A. O. Smith’s success, innovation is always a major part of the discussion,” Chairman and Chief Executive Officer Ajita G. Rajendra pointed out at the event. “One of the reasons for this company’s success for more than 143 years is our ability to identify changing customer needs and develop new products and new services to meet those needs.”

“We have invested a great deal in our global engineering organization over the last several years,” Rajendra said. “This new facility is just the latest in that series of investments.”

“We wanted to keep the new facility right here in Milwaukee,” President and Chief Operating Officer Kevin J. Wheeler said. “Having it adjacent to our world headquarters with the ability to bring our guests from around the world to both facilities, in close proximity to each other, is a great advantage.”

Milwaukee Mayor Tom Barrett thanked the company for its commitment to the city. “What I love about A. O. Smith is that it resembles Milwaukee,” Barrett told the attendees. “A. O. Smith is thriving today because of its ability to reinvent itself. It’s a world-wide company noted for the innovations it makes to stay relevant.”

“This is a great day for the district that I represent,” Milwaukee Alderman Jim Bohl said. “As we reinvent Milwaukee as a global water hub, who better to lead us in this transition than A. O. Smith?” Bohl pointed out that his great grandfather once worked at the company.

Rajendra also announced the name of the new facility will be the Lloyd R. Smith Corporate Technology Center. Smith was a member of the third generation of the founding family and led the company from 1913 until 1944. During that time, the company made a number of technology breakthroughs, entered several new industries, and built a world-renowned engineering organization of more than 500 people.

A. O. Smith is working with Milwaukee-based Irgens Partners LLC as the developer of the project. Zimmerman Architectural Studios is the architect of the new research center. CBRE represented A. O. Smith in lease negotiations.

Contractors & Installers Engineers & Specifiers Industry Community News Wholesalers & Distributors
You must login or register in order to post a comment.