Give students the option to chase the trades and not just a college-only future.

Not long ago, Americans realized that, as baby boomers (my generation) were retiring, a great brain/skills trust was departing the stage for good.

Our high steel workers, carpenters, welders, HVAC and hydronic service techs have given their best and come of age. For them, it’s time to retire. Sadly, there are few in line to replace them.

For decades, high school guidance counselors/advisers had convinced teen students that “college prep” programs were essential. Back in my school days, there was a lesser track known as “business prep.” At the time, these students learned stenography, electronic typing (imagine that!) and the basics of business taxes; that sort of thing. 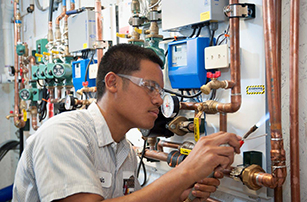 In rural areas, there was also the “ag” track for FFA-types; folks I now regard as noble, blue-blood champions. We, the well-heeled college prep students, called them “cows.”  Teachers taught them how to disassemble small engines and farming essentials. Those kids talked about tractors, crop yields and milking equipment as though they were topics of importance (well, yeah, they were).

And then finally, the least of all: there was the trade school option for those students with low aptitude, little enthusiasm to be taught, or simply preferred to work with stuff. They were the “shoppies” and wore scuffed-up boots and smelled of wood chips and machine oil.

Of course, among them — thank God, and despite the attitude they sensed from teen snobs like me — there were plenty of kids who truly wanted to learn a trade. 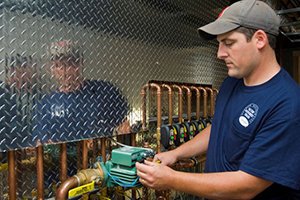 But it was hard for them to hold their heads high. School administrators and peers alike conditioned them to believe that they truly were of lesser stock.

And, all along, it was the elitists — like me, and the academes that pushed us along — who needed a hard lesson in humility, and real economics.

As our country’s blue-collar backbone got soft, and neglected, generations of students — in fact, a majority of them — were aimed at colleges and universities like bottle rockets. Lit, aimed and then neglected, they trudged through four-, five- and six-year bachelor degree programs to find little prospect of promised jobs.

Disillusioned, some went on to earn (or attempt to earn) a master’s degree. Then, with graduation, all were faced with the reality of an enormous debt.

Today, that misdirection has dealt another serious blow: according to Forbes magazine, our student loan debt is now the second highest consumer debt category — behind only mortgage debt — and higher than both credit cards and auto loans combined.

Through our love affair with institutions of higher learning, Americans built foolishly unrealistic expectations that somehow, they and their offspring were entitled to a college degree, and lofty, armchair jobs that simply had to follow.

Don’t get me wrong: college is fine for some. Maybe even a solid half of high school graduates. Hey, it was good enough for me, and I confess I learned a few things.

But we can’t ignore the fact that pursuit of the college-only dream drove millions away from appreciation of the trades as a viable way of life.

Mike Rowe’s got the right advice.

Losing the most basic skills to construct and fix things eroded the underpinnings of American industry. And now, as we rush to shore-up the entire foundation upon which our nation was built, to somehow rescue its industrial strength and a wide range of trade skills needed in the service sector, we see the desperate shape we’re in. 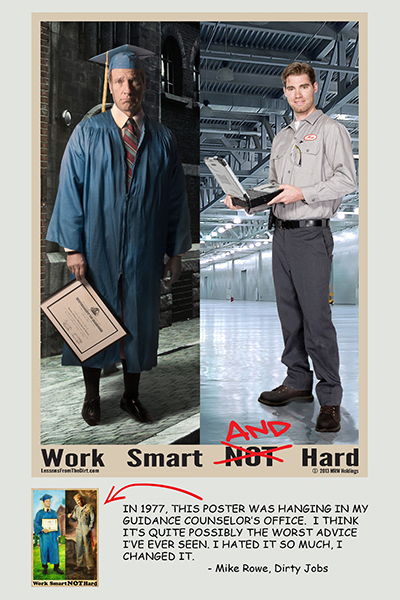 Fortunately, among others, Mike Rowe of “Dirty Jobs” fame has championed the cause to resuscitate appreciation for and interest in the trades. Through his role with the popular TV series, Rowe acquired huge appreciation for the men and women who earn an honest dollar each day, regardless of the tough, dirty requirement. “What’s wrong with dirt?” he says.

Rowe founded the mikeroweWORKS Foundation to promote the skilled trades as a career option. The foundation awards scholarships to those who’ve demonstrated an interest and aptitude in trade learning. He’s also become a champion for the blue-collar cause as a lobbyist on capitol hill.

Meanwhile, back at the ranch, there’s fierce resistance among teachers to teach in any way that differs from the way they themselves have learned. Many of those in the “guidance” business loathe to steer students toward proud, rewarding trade careers.

In fairness to career advisers and teachers alike, they learned their craft from teachers who wished to reproduce themselves.

As a result, students learned their disciplines, usually in neat, chronological progression — by teachers who wished them well on graduate record exams, so they could themselves be recognized as successful instructors or guides, even perhaps as a credit to their mentors.

Given the giant problem we now face today, teachers must shun this type of teaching with all the resolve and creativity they have.

The challenge to today’s instructors must be to teach in ways that make trade skills, disciplines and expertise come alive for students in the present moment.  Also, they must become vital, invested resources for the professional development of students who seek to become skilled trade pros.

Today’s school administrators and teachers should be eager to provide trade instruction in ways that instill in students a sense of self-confidence and enthusiasm.

This isn’t a challenge, but a joy, when teaching is done well. For the mixture of anxiety and enthusiasm with which trade students look toward future trade, and later family responsibilities of their own, makes them some of the most eager learners our educational system has ever produced.

Rather than being anxious and fearful about the prospects of assuring the continuity of a wide range of trade professions, I hope that teachers can teach in ways that renew and refresh themselves, in their own disciplines — helping them to find new energy and vigor as they lead students to understand their new, yet-to-be-explored goodness, and proud trade heritage.

Another facet of this challenge will be to instill in students a deep commitment to learn more than the bare essentials — what too often is sufficient to earn a living.

For trade students to want more, seeking greater challenges, it’s important for them to understand that entry into the trades is just the beginning. Let’s not forget the need to convey the importance to students of giving back: as they gain success in their careers, they should turn their attention to encouraging others through mentoring and community support.

Many of you might say that this would be something that successful trade pros should turn their attention to later in life. True, but ... what about those very small behaviors that invariably lead to bigger decisions? Such as tipping at lunch, even if just a bit beyond the required minimum.

Also, many of us have heard about “paying back.” Paying an elderly person’s grocery bill. Or, to donate to worthy causes. Giving at the church or synagogue. You get my drift.

As for helping others to learn, there’s everything from involvement with Big Brothers and Big Sisters, to tutoring kids for free or helping a young trade apprentice to hone skills.

Of course, this contradicts the scholastic Darwinian theory. It’s not survival of the fittest but survival of those who help each other. We, members of the human species, can rise above the confines of Darwin’s observations and theories.

If at some point during their “formative years” the inclination to give back wasn’t witnessed or experienced in some way — sparks later in life have no kindling to ignite.

This article is Part 1 or a 4-part series, which will run consecutively.