Fifty-five cities, 68 stops, two trucks, eight trailers. Maybe you’ve seen a truck in a parking lot near you, as part of Modine’s Innovation Tour 2016. This year, Modine HVAC is at it again and has paired up the Milwaukee School of Engineering to offer high-demand seminars and training on various HVAC solutions for contractors and specifying engineers. The company has come to understand that engineered products are critical to HVAC’s growth. 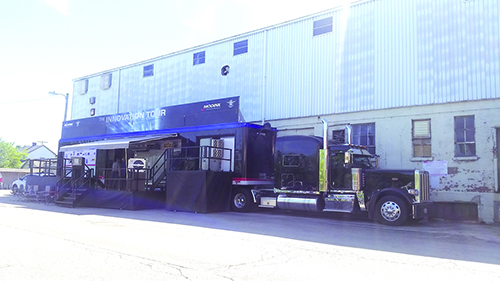 “Modine is seen as a trusted HVAC partner, and this truck is a way to show this,” said Kimberly Raduenz, communications manager, Modine.

The Innovation Tour has come a long way. Three years ago, Modine showcased its lineup at the Air-Conditioning, Heating, Refrigeration (AHR) Exposition in New York, which was snowed out, so the turnout was lighter than expected. It was at this show that company decided that they would reinvest and take their trainings to the road so they would be more easily accessible to engineers and show them that they are “more than a heater company.”         Modine focused on a way to incentivize the offerings by offering CEU credits and a delicious lunch to willing participants. This has given the company a chance to build excitement in targeted markets/regions, not mention enhance relationships with engineers. The tour has also drawn in contractors and quite a few distributors.

Last year’s “maiden voyage” exceeded expectations, drawing in more than 1,000 attendees and issuing more than 2,000 CEUs. This year, Modine increased the classes and lessened the stops. Faced with the high-quality of professionals who attended last year, Modine decided more specialized topics, especially in areas relating to troubleshooting, venting and installations, would be a better fit for engineers. How to size a geothermal unit, for example, was one of the most popular requests from last year. More generalized basic courses were expanded at the same time.

“So far, the tour has been pretty well-rounded. While we have decreased the quantity of stops, the quality of each stop has gone up, which has given people a chance to talk specifics, as well as build their confidence,” Raduenz said.

This year Modine also expanded its product line, adding 10 units and updating the older units. All products were represented on the Innovation Tour, including residential infrared patio heaters, and geothermal and school systems. 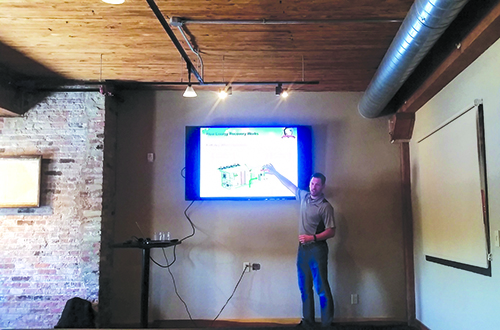 Some of the biggest buzz was around Modine’s geothermal units. This includes the GeoSync water-to-air geothermal units, which are equipped with the industry’s only vertical side panel placement, allowing easy access. These systems earned Modine ENERGY Star Most Efficient in 2017. As a whole, Modine strives for the highest efficiency designations on all its products.

Modine has much to celebrate that has allowed this tour to come to fruition. Recently ringing in 100 years, the company has come a long way since Arthur B. Modine was fiddling around with a radiator, looking for the best way to heat air passing through it. The company is also most known for its famous wind tunnel, used for testing heat transfer components within operating vehicles. As shown throughout years, the company’s innovation runs deep.

Be sure to check out an Innovation Tour stop near you! The tour concludes in Seattle, Washington on October 20.