These are just some of the job-enhancing products that caught my attention.

The 2017 AHR Show in Vegas was really great. I don’t know how many people were there, but there sure were a lot. It was held in the Las Vegas Convention Center, which is a huge place. I didn’t see everything, but it looked like the convention center floor was packed with vendor booths. It lasted for three days, which is not nearly enough time to see everything. I could have walked around for a week, just looking at products and talking to the vendors.

Given all of this, I picked out a list of booths to visit. I visited the manufacturers whose products I use in the field. I think it’s the best thing in the world to get to know the people behind the products. There are some really great people out there, and they take a lot of pride in the products that they are bringing to the market. Recognizing this and building relationships with the manufacturers is important. Many of them will go a long way to help ensure your projects in the field are successful or go above and beyond to help troubleshoot a problem with equipment. It is very easy to pick up on which ones are sales-oriented and which ones are service-oriented. I tend to choose manufacturers that are service-oriented. They will always be there when you need them.

One of my favorites was the Taco booth. The company always has a bunch of cool products, and the booth is vibrant with laughs and good humor. This year was no disappointment; Taco has a myriad of new smart pumps on the market that were on display. It has the right pump for almost any application. Having used most of them, I can attest to their dependability and performance. The company also filled some gaps in the ECM pump market with its 00e Series viridian pumps. 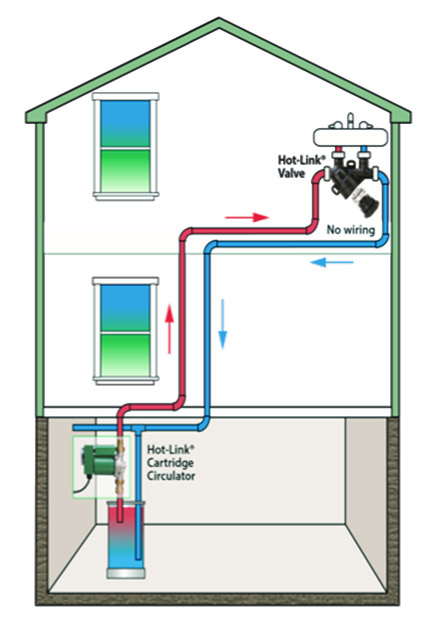 One of my new Taco favorites is its DHW Hotlink instant hot water system.

This product is so simple to install in both new construction and remodels, and, it just works. I recently installed the Hotlink system in one of my customer’s houses. The water heater was located in the middle of the basement, and the plumbing was done in a trunk and branch style. The main hot water trunk was done in ¾-inch copper piping and the branches were ½-inch copper piping. I understand why the installing plumber did this; he wanted to prevent temperature changes in the shower if someone were to flush a toilet or turn on another hot water fixture. The problem was, with all the bathrooms at both ends of the house, that ¾-inch trunk line created a long wait for hot water. One day I was there servicing their HVAC system, and they complained about it. I was on it! This was the perfect place to try out the new Hotlink system.

The installation couldn’t have been easier. I installed one Hotlink valve in the vanities of the bathrooms at each end of the house. Then, we installed a 006 bronze pump with a timer on the water heater supply. With the timer set to 15 minutes on and 30 minutes off, repeating for the whole 24-hour time period, we were done. It was just that easy.

As far as the pump selection, I have learned the hard way which product is best suited for different applications. The two pumps I typically choose from are the SmartPlus and a simple 24-hour timer controlled pump. The SmartPlus is just that; it’s smart. It has a sensor that goes on the water heater supply that detects whenever a hot water fixture is turned on. The software in the pump control tracks the hot water usage pattern and, essentially, learns your schedule. Then the control will only run the pump during the times when hot water normally gets used. It continually updates the scheduled run times as the occupants’ schedules change. It can even detect when you go on vacation, and it will quit running the pump until hot water usage is detected when you come home. At that point, it will resume operation right where it left off. This technology works in many households because we humans are very habitual creatures.

One place in which it doesn’t work so well is a retired engineer’s house. That’s where I put my first one in, and I soon learned of my mistake. Retired people don’t always have a schedule, and engineers notice everything. Since the pump didn’t have any schedule to learn, operation was completely random. It wasn’t long until his system was converted to a pump on a timer.

After that, I always make sure I know the usage patterns, or lack of, before installing an instant hot water system in someone’s home.
So big thumbs up for the Taco Hotlink system. It is super easy to install and saves a lot of water each year. The customers loves it!

I always stop by the Uponor booth as well. As far as I am concerned, it is one of the leaders of radiant floor heating systems in this country. This year it had the new Climate Control Zoning System II on display.

Not having seen it before, my curiosity was instantly piqued. The fellow at the booth was more than willing to show it to me and tell me all about it in great detail. After listening to him for a while, I began to realize that this control may well be one of the biggest assets to ModCon boilers and zoned hydronic systems that we have seen in quite a while. As we go into more detail, you will see how it has the potential to improve system efficiency, longevity and reduce installation costs, all at the same time.

The control is basically a base unit that controls the loop actuators on a manifold. It connects wirelessly to each zone’s thermostat. It’s the software coding inside the base unit that makes it so smart.

As was described to me by the good fellow at the booth, there are the two main functions that make it unique. It automatically balances the flow rates on the connected manifold, and it goes a long way to eliminate short cycling of the boiler by opening zones on a soft call for heat whenever a hard call for heat exists.

Have you ever sat by a manifold and balanced it? I have, and it can be a bit tedious. I’m not sure if it got better or worse, since we have flow meters on the manifolds. Before, we just set the valves to the proper amount of turns, as indicated by the design software and called it good. Now we have visual flow meters and really have no excuse not to have the manifold properly balanced. It still can be a bit trying; as you change the flow in one loop, it affects the fluid dynamics of the whole manifold and changes the flow in the other loops. Granted, it has become much easier to do with a smart pump that operates on a DeltaP platform. That pump will provide a stable and constant pressure to the manifold, allowing flow rates to be changed in one loop without affecting the flow rates in the other loops, the way a fixed speed pump will. But with the climate control zoning system, we won’t need to spend any more time balancing manifolds. Upon startup, the control will fully open all the corresponding actuators on the manifold, on its first call for heat. It then communicates with the thermostats and watches the response time of the zone. It uses the response time measurements to calculate the opening positions of the actuators.

In other words, if a zone heats up quickly as compared to the other zones, that zone’s actuators will only be partially opened on the next call for heat. In this manner, it is able to balance the entire manifold. The actuators are the regular heat motor type. In order to keep an actuator suspended in a artially open position, the control uses PWM technology.

So that’s a very cool feature, but here is my favorite one. As you know, a regular thermostat operates on a dead band. For example, say you had the temperature set at 70 F. The thermostat would let the temperature drop the width of the dead band, in this case 1 degree, to 69 F before sending a signal for heat. The heat would then operate until the thermostat measured the setting of 70 F and drop the call for heat.

Now, with software and sensors, we can take that 1-degree dead band, and chop it up into a hundred or thousand points of measurement. With that kind of sensitivity, we can see exactly what’s happening in a room, by actively measuring the rate of increase and decrease in a room’s temperature.

What the climate control zoning system receives a call for heat from one of the thermostats, meaning the dead band has been realized in that zone, it not only opens the actuators for that zone, but it also looks at the rest of the thermostats. If other thermostats are in that dead band where they haven’t signaled for heat yet, but are below the set point threshold, it will also open the actuators to those zones and allow them to satisfy.
This will go a long way to alleviate boiler short cycling due to microzoning. It will also reduce the need for buffer tanks in many scenarios.

I used to do something similar to this with TRVs. I would install a TRV to control the flow, based on the room temperature, in any small zone. The piping for this zone would be connected to the system distribution manifold but would not have any actuators or zone valves. This allowed the zone to have access to flow/heating, any time any other zone called for heat. The TRV would keep the zone from overheating.

What the Uponor climate control zoning system does is very similar to this. But it does it electronically and requires less hardware and installation time to do it.

I would be lying if I said I wasn’t excited about this product.