Point of Use Tempering Mixing Valves

With TMVs, plumbing systems can be designed to prevent bacterial growth and deliver tempered water to the end user, eliminating the chance of scalding.

The risk of scalding during bathing and showering has long been a public health and safety concern. Early studies by the Consumer Product Safety Commission conducted back in the 1970s estimated 2,600 scald inquiries per year were caused by excessively hot water.

This represented only a small percentage of the population at the time. However, the data revealed the injuries were severe and sometimes fatal. It was also found that children under the age of 5 and elderly over the age of 65 accounted for 75 percent of cases resulted in death. It was speculated these age groups were either unaware of the potential danger or their reflexes were simply unable to react fast enough to avoid their inquiries.

Guidelines were published in the Uniform Plumbing Code, Table N 104.1 as shown below. The table explains the scald potential under various temperature ranges. Scalding will likely occur at even lower temperatures listed for infants, the elderly and the infirmed. 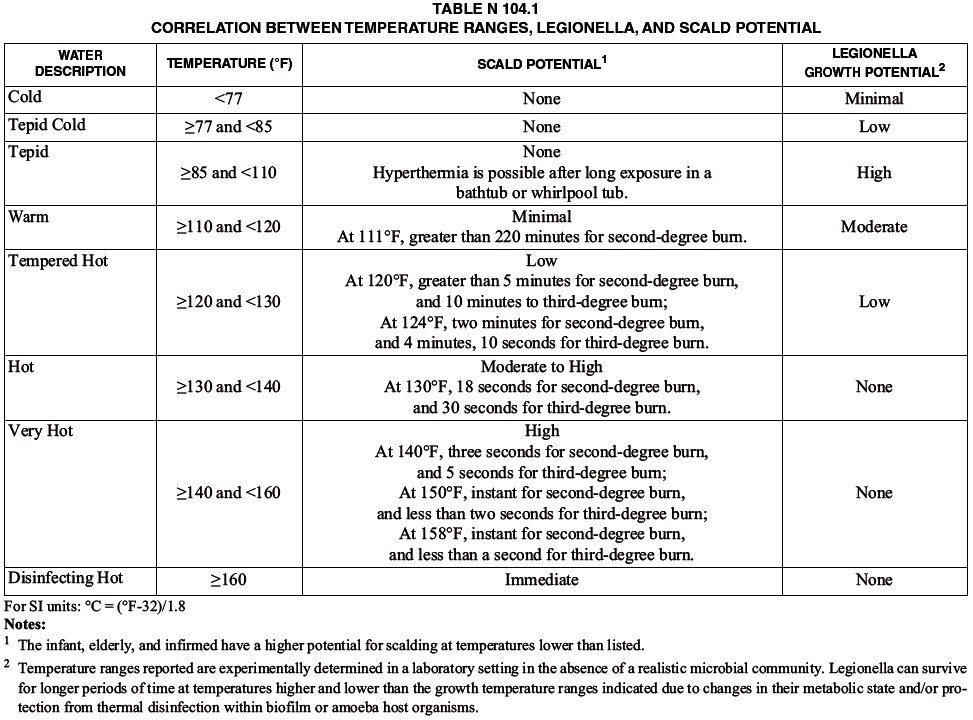 It is worthwhile to mention this table also indicates the growth potential of legionella at the different temperature ranges as many TMVs available in the market are certified to comply with multiple ASSE standards, making them suitable to be installed at locations beyond POU applications.

An example is the water temperature limiting device required by code to be installed at public lavatories. The applicable performance standard is ASSE 1070/ASME A112.1070/CSA B125.70. Such valves may also be in compliance with ASSE 1017, making them acceptable for installation at the water heater tank.

There are several sections in the UPC that require various POU devices to address the potential hazard. In Chapter 4, the code requires overhead showers and tub/shower combinations be installed with mixing valves that comply with ASSE 1016/ASME A112.1016/CSA B125.16.

This standard also addresses hand-held showers and body sprays. Such devices are subject of interests as there can also be a possibility of thermal shock in cases when the automatic compensating valve fails to perform. Testing in the standard includes verifying the valve’s ability to reduce the risk of scalding and thermal shock when the water supply is suddenly interrupted.

Elderly and the physically impaired individuals are more susceptible to thermal shock as it can cause the user to stumble and fall, resulting in more severe inquiries.

Studies by the CDC suggested that bathrooms tend to be most hazardous for persons in the oldest age groups (≥ 85 years). Data showed in the age group 15-24 years old, there are 20.2 injuries in every 100,000 during bathing and showering. This rate rose sharply to a staggering 79.9 in the age group 85 or older. According to the 2010 census data, the percentage of population age 85 or older was approximately over 1.6 percent of the total population. That translate to approximately 4.95 million people.  This number grew to 6.6 million in 2019 and is protected to reach 14.4 million in 2040.

Certification on these devices becomes critical in order to protect public health and safety. It is worth noting that the code references both ASSE 1016/ASME A112.1016/CSA B125.16 and ASME A112.18.1/CSA B125.1 on control valves in tub-shower combinations. This can at times lead to confusion for consumers, manufacturers, and even local officials on some occasions.

As the option is provided, the certificate of listing may indicate either of the standards. Some local jurisdictions may reference the ASSE 1016/ASME A112.1016/CSA B125.16 in their local plumbing code or ordinance. In cases when the valves are certified to the ASME A112.18.1/CSA B125.1, there is a possibility manufacturer can face some hiccups during the approval process. When the valve is sold together with the trim set, the assembly will be certified to ASME A112.18.1/CSA B125.1.

As a certification body, one common question received every now and then is verifying the proof of compliance with ASSE 1016/ASME A112.1016/SA B125.16. Professionals with experience working on these standards are familiar with the relationship between the two standards. Though the scope of ASME A112.18.1/CSA B125.1 addresses a variety of other end point devices, the actual testing protocols on the valves are the same as the two standards references each other. With proper clarification and elucidation, the confusion can often be resolved quickly.

In 2006, the Environmental Protection Agency launched its WaterSense program. Part of its mission is to promote a nationwide ethic of water efficiency to conserve water resources for future generations. The first version of the WaterSense Specification for Showerhead was published in March of 2010. According to the 2020 accomplishments report published by EPA WaterSense, by the end of 2020, the WaterSense program on showerheads products alone has saved a cumulative 1.58 trillion gallons of water.

Due to the success of the program and the market trend becoming more inclined towards water conservation, some local jurisdictions have adopted requirements of WaterSense certified products.

In other developments, the IAPMO Water Efficiency and Sanitation Standard (WE•Stand) and the California Green Building Standard Code (CalGreen) also require showerheads and hand-held showers be certified to the EPA WaterSense Specification for Showerheads. The specification requires the maximum flow rate must be equal to or less than 2 gallons per minute.

To maintain the same protection against scalding and thermal shock, it is important to verify if the existing TMV is compatible with the new showerhead. To address this safety concern, both the ASSE 1016/ASME A112.1016/CSA B125.16 and ASME A112.18.1/CSA B125.1 have similar requirements on markings for showerheads and hand-held showers to assist homeowners to install a TMV that is compatible with the showerheads and hand-held showers.

As technology improves, electronic TMVs are becoming more readily available on the market in recent years. While these innovative products offer additional smart features that enhance the user’s showering experience, the requirements of these products to comply with the same safety functionality remain essential in providing a safe bathing and showering environment.

Phil Cheng is the director of product certification at IAPMO R&T. He holds a BS Mechanical Engineering from Carleton University, Ottawa, Canada. Before joining IAPMO, he worked for a diffusion furnace manufacturer for the semiconductor industry and at a consumer electronics manufacturer. He actively participates in the IAPMO Standards Review Committee and Product Certification Committee meetings.