In the February 2022 issue of Plumbing Engineer, Gary and I discussed how fundamental math and piping parameters, coupled with mock-up testing and available high-resolution peak flow data, can serve as a platform to design multifamily building hot and cold water distribution networks. Slavish reliance on decades-old curves and “accepted practice” can lead to wasteful designs that don’t serve the owner or tenants.

We submit that it is high time to adopt more compact plumbing layouts and smaller-diameter piping in plumbing designs for today’s higher-efficiency buildings.

In this article, we discuss some of our post-construction experiences and how we predicted and then confirmed the achievement of our plumbing performance goals.

All went well during construction of the first-phase buildings at Solara, a new net-zero multifamily project near Schenectady, N.Y. I did my homework — gathered peak flow data at comparable buildings, consulted pipe and fitting tables for pressure loss, exercised long-accepted equations and even mocked up and tested sections of my design after pressure testing.

Growing up in Vermont’s hills, where Dad and I had to fix things that broke ourselves, I learned by doing. The day before move-in day at Solara, when the hot water was turned on for the first time, the general contractor found me adjusting my solar system and announced that the shower sprays were flaccid. Ouch!

With my hands full with other challenges, the plumbing crew chief hurriedly drilled out the pressure-compensating disks in the shower heads and declared the job done — the showers were OK. But I was left scratching my head and wondering what pressure hogs I failed to identify. For me, a good shower in the morning and a cup of coffee launch my day’s labors. I certainly wanted our tenants to enjoy the same experiences.

You know what they say about going that last mile and what happens to those who assume things? I made the classic mistake of not examining the final fixture — the shower valve and nozzle the plumber chose. So, I found a leftover shower valve body and took it apart, as Dad taught me to do. I was astounded; the valve body had a big problem, a very small diameter hole for the water to pass through when diverted to the shower arm.

I immediately set up a test rig (see Figure 1a); the pressure loss numbers left me deflated, similar to the shower sprays. That drilled tube (hole on the left) was about 2 inches long and 0.19 inches in diameter. I examined a competing model and measured the hole at 1/4 inch — a 73% increase in the cross-sectional area. 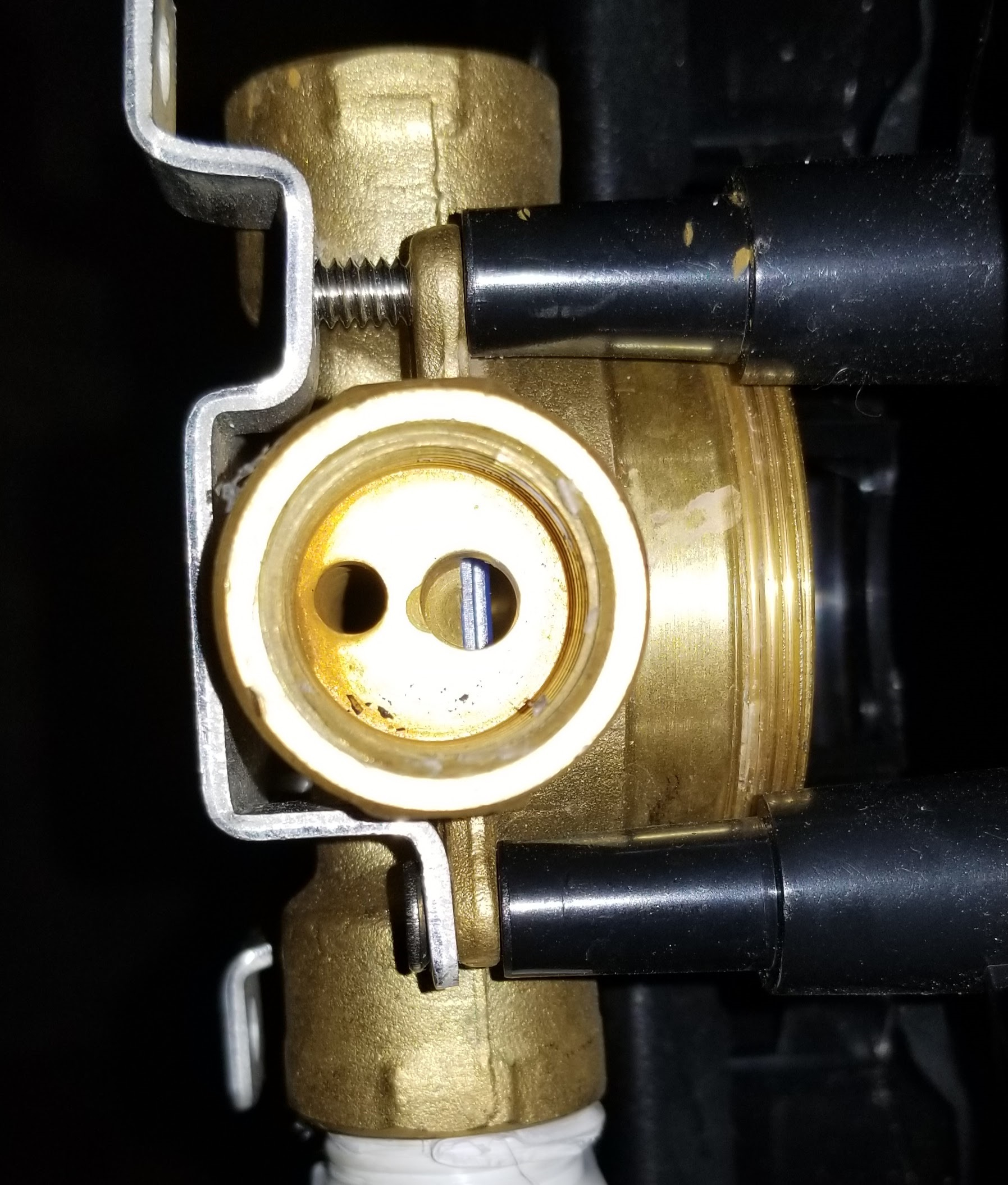 In a panic, I called Gary; he suggested that I call Neoperl to get alternative pressure-compensating disks. And then, he undertook his own testing on a bunch of similar products that confirmed my observations. I took the sample disks Neoperl sent me and chose appropriate ones for all the apartments not occupied yet. I even bought a bunch of better-performing shower nozzles I chose after testing numerous candidates. We never got a complaint after that.

To be sure, I set up another test rig to allow me to visualize the differences in the force and spread of the stream coming from a showerhead. Gary and I came up with the idea of putting graph paper on the wall to the side of the shower so we could see the stream from the side (see Figure 2). A stream with good force will follow a line perpendicular to the face of the showerhead for a longer distance than one with less force. 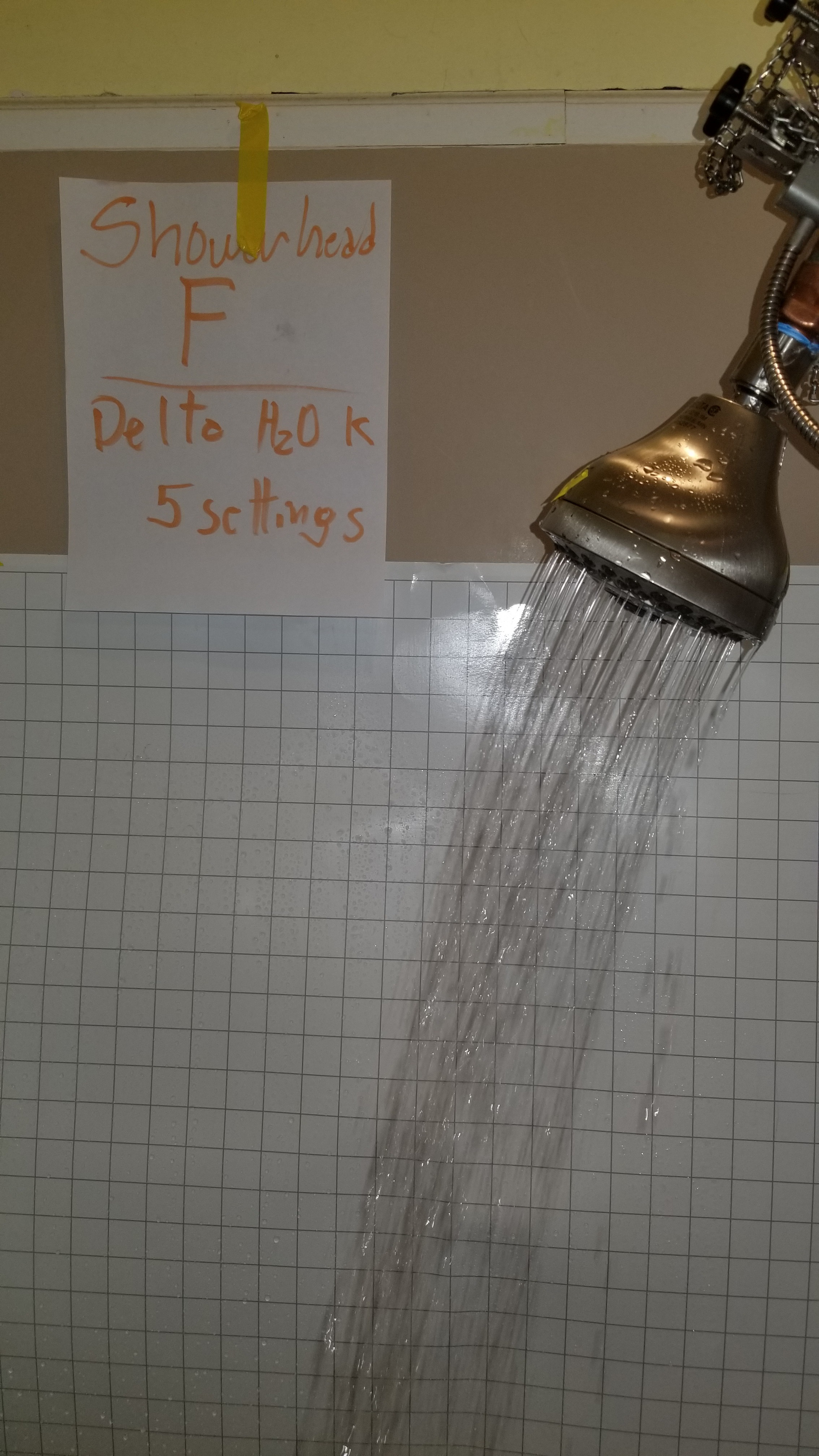 The spread of the showerhead at the distance your head and neck will be along this line can be measured using graph paper. In this example, the stream follows the “ideal” line for only 6 to 8 inches before the effect of gravity is noticeable. The spread of the stream is essentially the same as the diameter of the showerhead throughout the distance visible in the photo.

Fast-forward two years: a similar game-changer emerged from additional on-site research. A tenant in a renovated apartment building had pried out the flow regulator in his effort to increase the pressure out of the handheld shower wand. 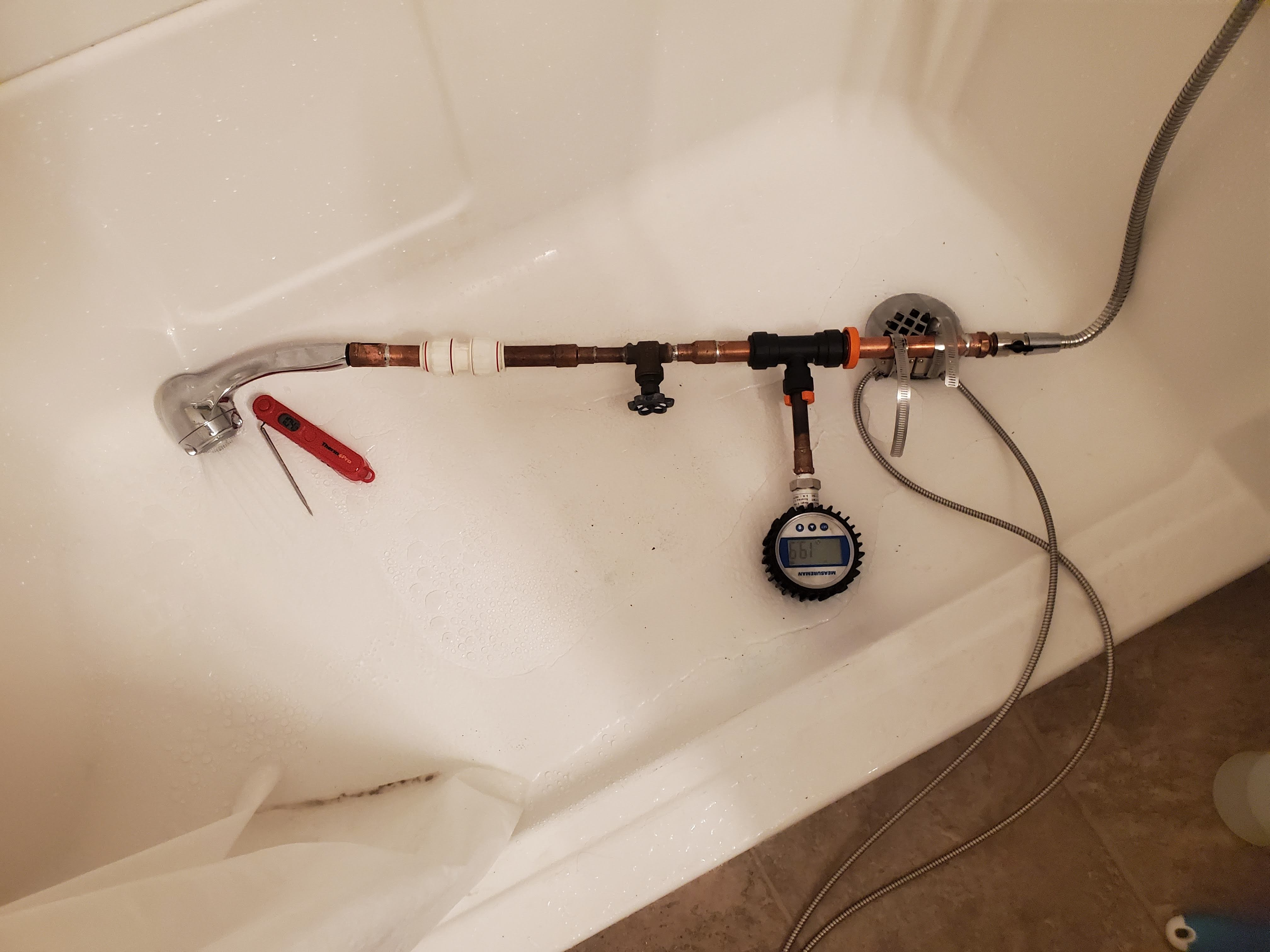 Now, we warn plumbing engineers to spec hoses with internal diameters greater than 0.3 inches and pressure drops at full flow to be no more than 3 psi. Shower valves, shower hoses and showerheads all have pressure losses, and some of these can create an unhappy tenant. These devices need to be accounted for in plumbing design and product specifications. The criteria for “or equal” needs to be carefully chosen.

“The best-laid plans of mice and men often go awry” is an adaptation of a line from Scottish poet Robert Burns. Plumbing jobs are no different. Our experience is replete with examples. For instance, rough-in inspections at two recent jobs revealed the plumbers installed single loops where two were designed and clearly shown on the plans.

In another case, one plumber was caught installing numerous internal PEX elbows instead of swept bends (many feet of unnecessary equivalent-length pressure loss) in homerun fixture twigs. He explained that he was a “copper guy” (Really!?).

In most jobs, trunk misalignment and missing insulation when the sheet rock went ahead of the pipe insulator are other issues (see Figures 4 and 5). 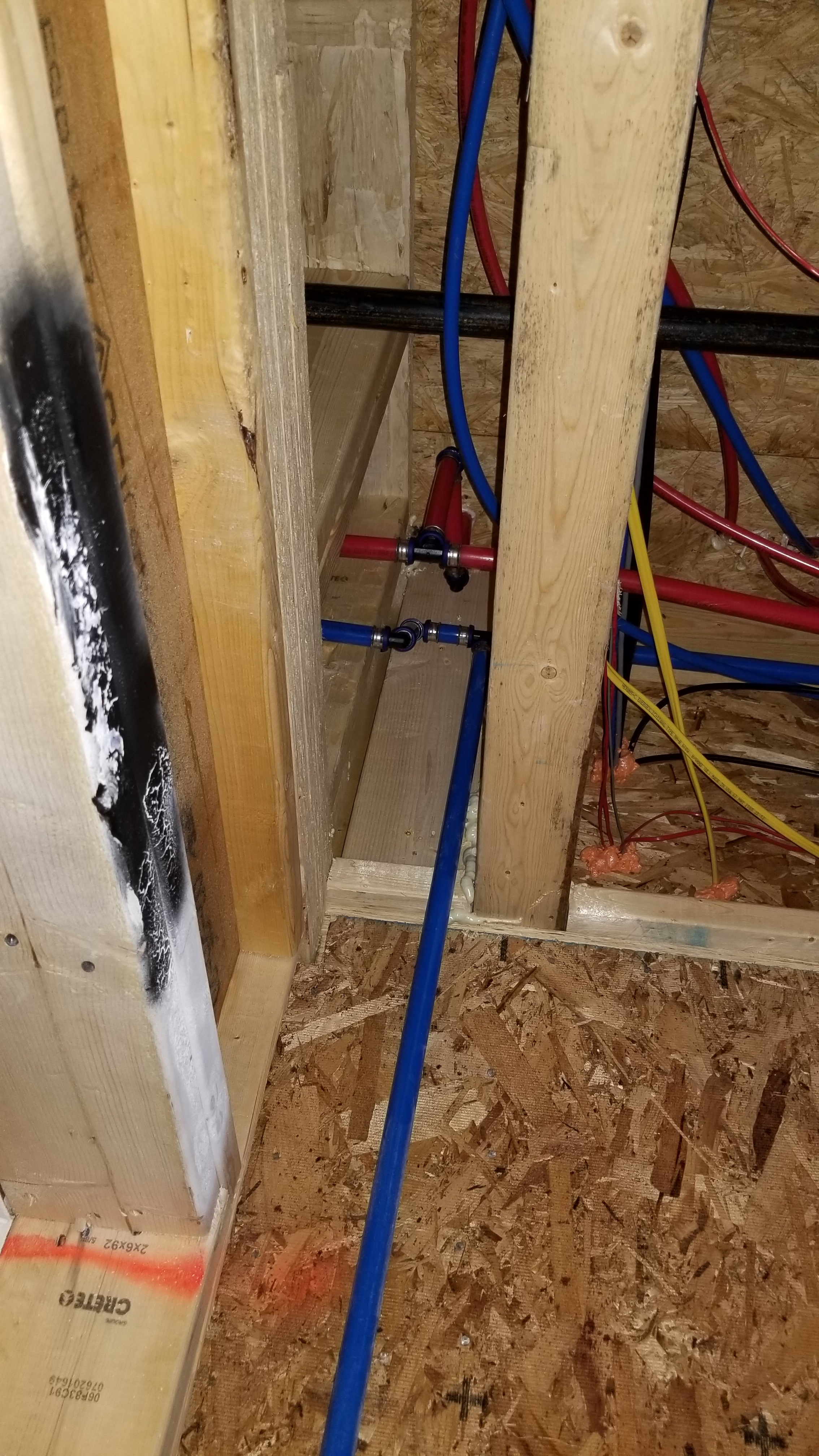 All of these mistakes revolve around the communication (or lack of it) among the members of the entire team. If we want better buildings, expectations need to be clear, all the way to the people holding the wrenches, torches and hammers, since the quality of construction is literally in their hands. 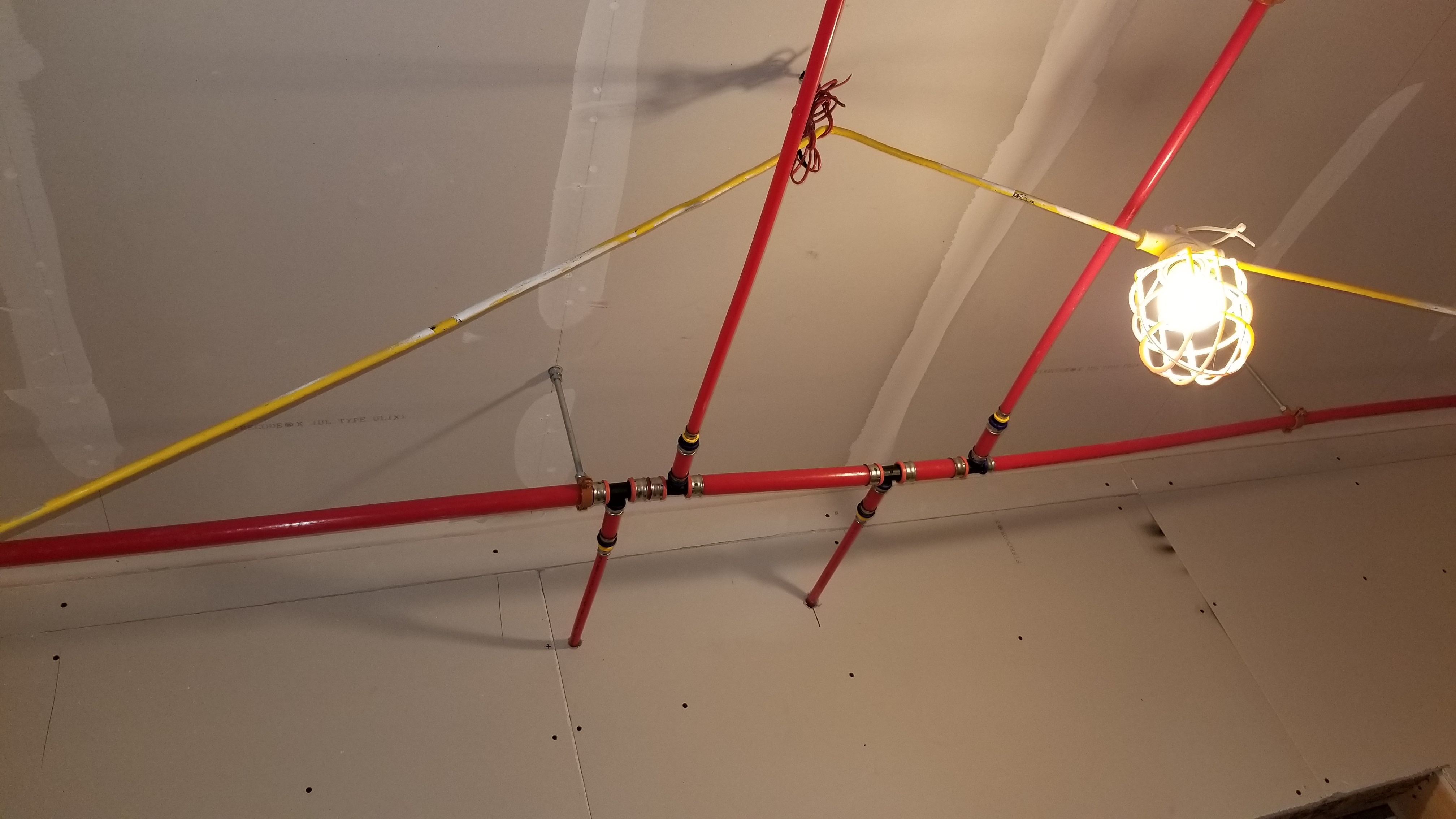 We are delighted that we will soon have 14 low- and medium-rise multifamily buildings in upstate New York with practically perfect plumbing. The newest building plumbing designs were based on our on-site flow metering data, application of IAPMO’s Water Demand Calculator (WDC) and a growing body of peak flow frequency data from comparable buildings.

The WDC predicts higher peak flow rates than what we measured in many existing buildings, but indications are that designs based upon the WDC have substantial safety factors baked in.

Gary and I continue to collaborate and refine our design process as our experience with advanced plumbing expands. To make our clients feel truly satisfied with their new buildings, we return to them to make sure the as-builts perform as we predicted in the design.

Future articles in this series will explore measured pressure losses and times to tap in the apartments we designed and the pressure losses in pipe, fittings and tub/shower valves we measured in our lab. We also will share what we have learned by comparing measured peak flow rates with the flow rates predicted by the plumbing code and by the WDC.

Peter Skinner, PE, owner and founder of E2G Solar, designs, installs, repairs, researches and teaches about residential and commercial solar thermal systems and their integration with heat pump systems in New York and neighboring states. He has worked as an engineer, educator and legislative and policy advocate in the environmental field for the past 50 years.

Gary Klein, president of Gary Klein & Associates, is intimately involved in energy efficiency, renewable energy and code renovation nationally. His research into pipe and fitting pressure drops and encyclopedic knowledge about the history and practice of plumbing installation methods and fixture performance form the foundation for his consulting work and advocacy for policy change.

Engineers & Specifiers Engineering Green Building Plumbing Projects Residential
You must login or register in order to post a comment.