Single-point densities are not novel concepts when it comes to design criteria for fire sprinkler systems. The topic has been discussed at the committee level since the 2002 revision of NFPA 13, Standard for the Installation of Sprinkler Systems. At the curve’s inception, sliding up the curves allowed for lower densities to be used over a larger remote area.

What was the benefit of doing this? Lower densities require less flow and, in turn, less pressure. In sprinkler systems, pressure requirements are the driving factor in hydraulic calculations. One way to lower the demand pressure of your system is to cut the pressure at the sprinkler from the start — but don’t go below 7 pounds/square inch (psi).

When looking at the existing density/area curves, any point on the curve is an acceptable design basis for systems installed in accordance with the 2019 edition of NFPA 13 and earlier. The 2022 edition will still permit the use of the density/area curves for the evaluation and modification of existing systems (see Figure 19.2.3.1.1). 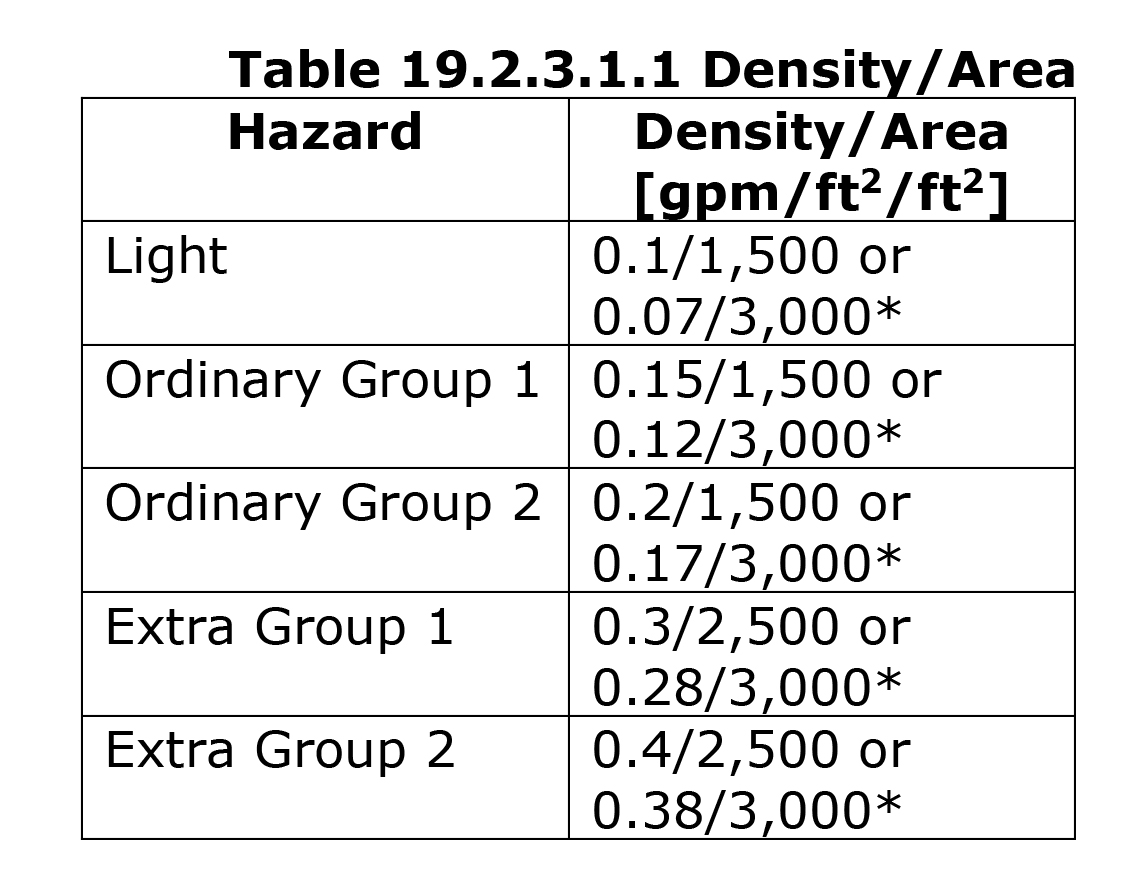 At first glance, it is apparent that the curves for light and ordinary hazards are parallel, as are the two curves for extra hazards. So, does that mean light and ordinary hazard occupancies scaled perfectly? No! In an effort to save on costs, the theory of parallelism was established to use one set of data and then increase or decrease the minimum density on the other curves based on the relative fire risk for the other hazard.

In addition, the original tests performed in the late 1960s and early 1970s limited the evaluation of the design criteria by only using K-5.6 and K-8.0 sprinklers. Today, the savvy designer possesses a multitude of K-factors available to meet specific design needs. Flow, K-factor and pressure are all related through the following equation:

In this equation, Q is the flow (gallons/minute, gpm), K is the K-factor (gpm/psi1/2), and P is the pressure (psi). Since the square root of pressure is indirectly related to the K-factor of a sprinkler at a set flow, a designer only needs to increase the K-factor of the sprinkler to lower the starting pressure of the hydraulic calculation.

Even though the change of the curves was coined as single-point density, there are two design points to choose from in the new table.

The options in the table take the first and last design points from the old curves. The asterisks denote that the 3,000-square-foot area and density are to be used when sprinklered spaces are adjacent to unsprinklered, combustible concealed spaces.

The occupancy hazard fire control approach — the standard method for calculating light, ordinary and extra hazard occupancies — was not the only design method affected by the shift to single-point densities. Protection of storage occupancies using control mode density/area (CMDA) sprinklers also was revised. In justifying the change to the CMDA storage curves, the committee noted:

“Data from the development of the storage curves show us that there were no tests run for the five Class I curves, one test run for the five Class III curves and no successful test […] for the Class IV curves. The bulk of the testing was with Class II storage, and the assumption of ‘parallelism’ was adopted so limited testing could develop like curves.”

In Chapter 21, Protection of High Piled Storage Using Control Mode Density Area (CMDA) Sprinklers, new systems are required to use new tables developed by the committees that, again, provide two options. Unlike the occupancy classification table, the storage tables provide two different densities depending on the temperature rating of the sprinkler being used.

Higher temperature-rated sprinklers allow for a lower density requirement since fewer sprinklers are expected to operate. In this case, less is more as the discharge from fewer sprinklers will have a greater end head pressure and flow with a coverage area more focused on the fire area.

While the 2022 edition took great strides to get single-point densities published in NFPA 13 after a 20-year battle in the standard development process, the work is not yet complete. Sometimes when you fix one problem, you create two more. For the 2025 edition of the standard, the committee on sprinkler discharge is currently working to consolidate all the existing system requirements to Chapter 30, Existing System Modifications.

The intent is to make the application of new and existing requirements and clean up the structure of Chapters 19, 21 and 30. A draft of the new chapter 30 should be published in the first draft report for the 2025 edition of NFPA 13 later this year. I encourage any user of the standard to review this — and all other changes — and comment with your opinions. For more information on the next edition of NFPA 13, visit www.nfpa.org/13next.