‘Three-quarters of our work is steam. We never leave Brooklyn.’

Steam systems may have evolved over the years, but Big Apple Installations knows the work still requires an old school skillset.

There are few places in the world with a higher concentration of steam boilers than Brooklyn. So it stands to reason that the borough with roughly 3 million residents has quite a demand for steam technicians. Although steam systems have evolved to become very efficient, comfortable and quiet, the market is still a niche that requires a specific skillset and understanding of the hybrid historical/modern technology.

“Three-quarters of our work is steam,” Rosen says. “We never leave Brooklyn. We’re too busy here.”

Rosen started the company 12 years ago for a new challenge, after nearly 15 years in the trade. He began working at a supply house when he was 15 years old, and went into the field several years later. Today, the company has four full-time techs in the field, and Rosen’s sister, Jessica, manages the office.

“We specialize in cast-iron, gas-fired equipment, so we’re very effective in that market,” Rosen adds. “The equipment never presents any challenges we can’t overcome. Moving around the city, however, that’s another story.”

Most jobs are blocks apart, and it can take Big Apple techs more than an hour to get from one to another. Parking tickets are a regular part of the job; they’re absorbed in the cost of the project.

Many of the narrow streets are lined with tall brownstone homes built largely in the mid-1800s. Whether private residences or converted to apartments, many of Brooklyn’s homes are still heated with steam systems, the dominant source of central heat in that era.

Big Apple’s Google Ads campaign delivered a lead in mid-October when the owner of a 12-family rental property called about replacing the brownstone’s large steam boiler.

The existing 21-year-old, eight-section steam boiler had cracked and was leaking badly. It came as no surprise that the landlord was desperate to get the problem fixed with winter quickly approaching.

“This would typically be a cut-and-dry project for us in normal times,” Rosen says. “But given the industry-wide supply chain issues, it was stressful assuring him that we could do the job. I don’t make promises I can’t keep.”

Generally, Big Apple Installations conducts an EDR (equivalence of direct radiation) calculation to determine steam boiler size. However, a number of the apartments were inaccessible and time was tight. Sizing off the existing boiler capacity, which, according to the landlord, provided great comfort and acceptable energy consumption, Rosen began looking for a replacement boiler. 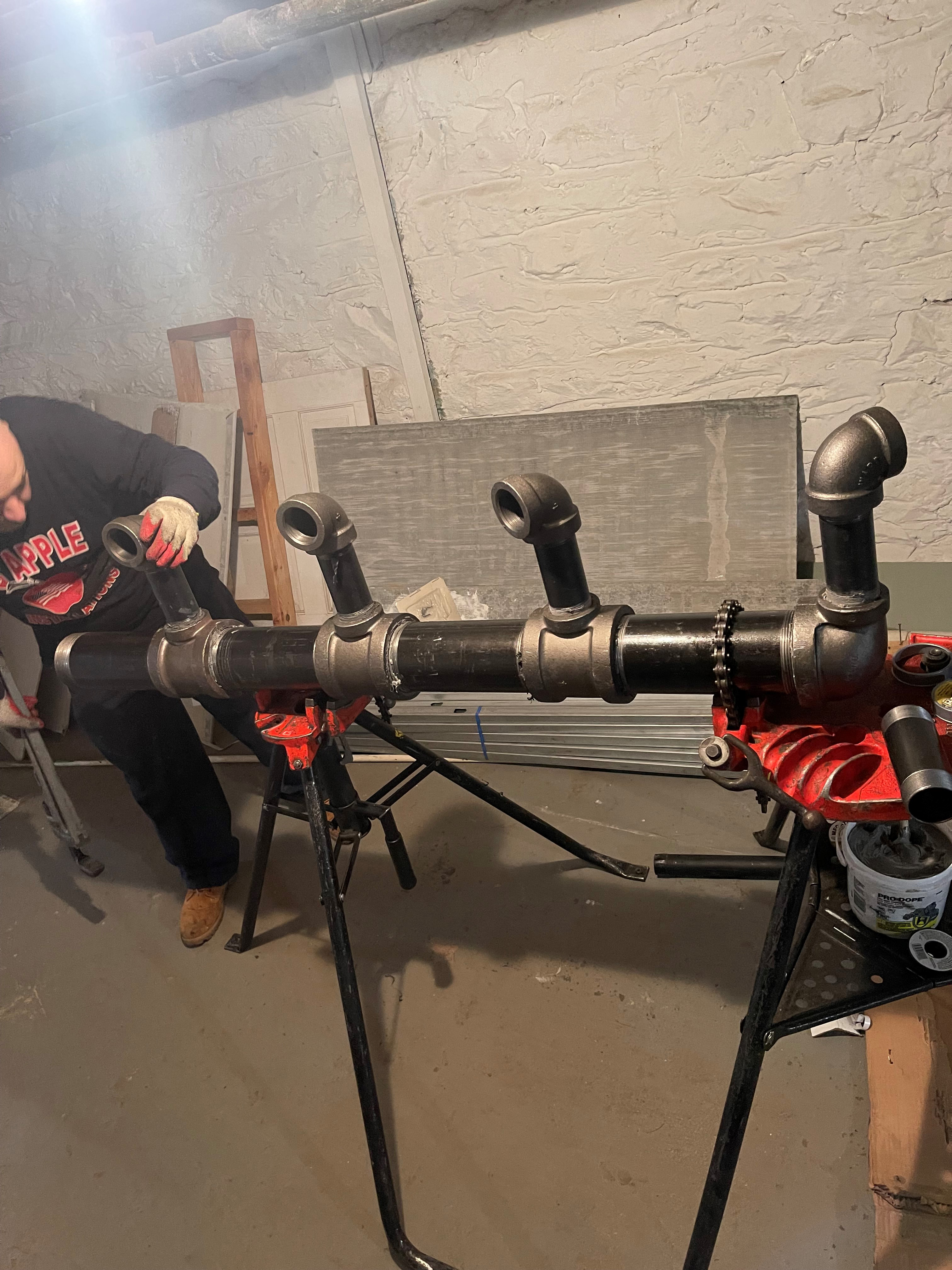 Calling supply houses, he learned that there weren’t many boilers in the 500 MBH size range he needed.

However, after a conversation with Frank Brecher, at Venco Sales, a rep agency in Huntington, New York, Rosen learned that Bruce Supply Corp., located right in Brooklyn and an NYC stalwart since 1965, could deliver a 550 MBH SteamMax boiler made by U.S. Boiler Co.

“I’d read a little about the new SteamMax boiler,” Rosen says. “I’d wanted to try it, given the design, which promises a longer lifecycle, but I didn’t really want to try it when we were under a big deadline. I wanted to use a boiler I was familiar with and then try the SteamMax later when I had an extra day to wrap my head around a new model. That’s how I like to approach all new products.”

That was a luxury, though, that Rosen didn’t have.

“Brecher and Venco always come through, and Bruce Supply is where we get most of our steam equipment,” Rosen adds. “So I was confident that this was the fastest way to get a boiler from a manufacturer I trust and use on a regular basis.”

The boiler room is located in the cellar, with standing cast-iron radiators throughout the home. Rosen joined Big Apple technicians Harry McCombs, Hughan Carridice and T.J. Campbell as they tore down the old eight-section boiler and removed it from the home.

The new 12-section SteamMax came knocked down, which made it a lot easier to bring the new boiler in than take the old one out.

“I’ve been a loyal U.S. Boiler customer for a long time,” Rosen adds.  “When I first got into boiler work, NYC code required secondary manual resets and LWCOs, and U.S. Boiler units were the easiest to use for connection of those components. So we sold those boilers, got very good at installing them and haven’t changed since. We learned that the SteamMax has the same flexibility.”

Designed specifically to overcome the challenges of poor water quality, while simultaneously being installer-friendly, the 82 percent efficient SteamMax boiler has a variety of tappings on both sides of the unit.

The boiler’s steam-specific heat exchanger includes a larger steam chest with an increased steam disengaging area, a highly stable water line and wider internal pathways. To further resist corrosion, all heat transfer pins above the water line have been removed and added below the water line, and the boiler’s steam risers are placed on intermediate sections to promote smooth steam flow.

Pre-cut, near-boiler piping kits are available for residential models between 75 and 250 MBH, and the unit is available in 12 sizes up to 550 MBH. 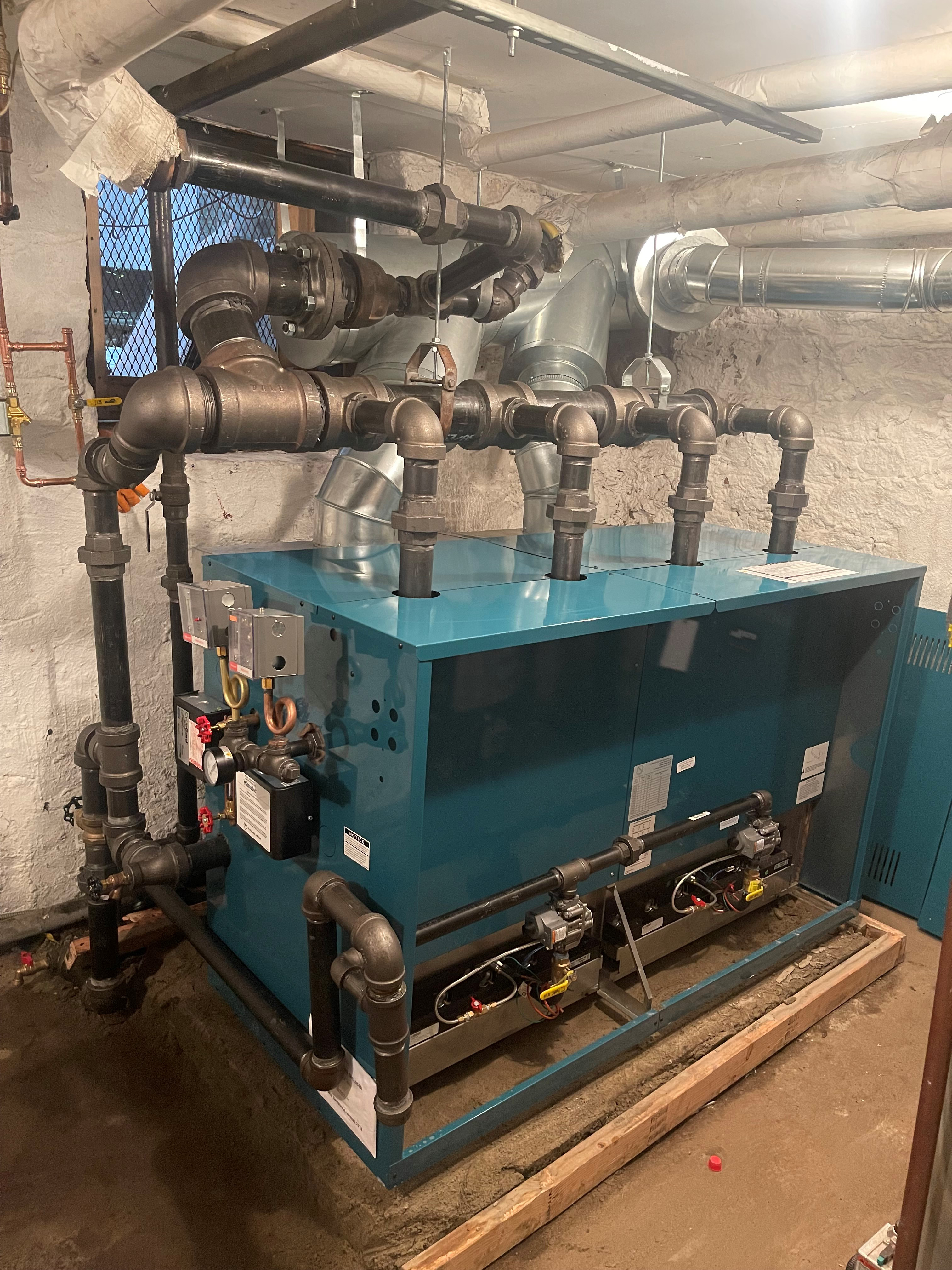 “The whole retrofit, minus pipe insulation, took us two days,” Rosen explains. “The boiler was extremely easy to wire. I think that if we’d have been familiar with the unit, we could have done it in half the time. Now that we’ve installed the largest SteamMax available, I’d like to start phasing out the other models we typically install. Most of our retrofits are smaller than this, and I like the fact that U.S. Boiler offers near boiler piping kits for the sizes we use most often.”

Aside from supply chain issues, there was only one hiccup on the project. The company that lined the chimney had used too small of a liner, tripping the boiler’s spill switch. As a temporary fix, Big Apple removed the rain cap from the chimney and notified the landlord.  This safely solved the issue until the chimney could be lined later.

“We fired the boiler and were pleasantly surprised at how quickly the building heated up,” Rosen says. “I have to give Venco, Bruce Supply and Chris Massey, at U.S. Boiler a lot of credit on this job. They really pushed to get me a boiler in a timely manner despite the climate in our industry.”

The customer was empathetic about the supply chain shortages. He could have called around to other installers to see if some of Big Apple’s competitors had a unit in stock, but he recognized Rosen’s expertise and was courteous despite having a full apartment building with a leaking boiler.

“This is a customer we want to keep,” Rosen adds. “Not only does he own a variety of properties in Brooklyn, but he’s understanding and doesn’t make unreasonable demands.” l